For over 50 years, Hot Wheels cars have been synonymous with making sturdy, made to scale toy cars, as well as their unique playsets and variations. Mattel co-founder Elliot Handler was the one to spurn the design team to beat every other toy car on the market. To do it, he hired a car designer from General Motors, a rocket scientist, and more to create a toy that was like the tiny equivalent of a real, functional car.

It’s safe to say that they’ve been succeeding for decades, as evidenced not only by their sales but by their most expensive cars. The Hot Wheels on this list are prototypes, one-of-a-kind designs, limited editions, special editions, or something else entirely. Regardless of how it happened, they are now the 8 most valuable Hot Wheels in the world.

The Custom AMX Hot Wheels car was designed by Ira Gilford, who worked for Mattel in the late 60s. It debuted in the “Mainline” Hot Wheels series in 1969 and was not released until 2010 in a retooled version.

There are many variations and colors of the Custom AMX, from hot pink to gold to red to apple green. The one that pulls in serious value at auctions, however, is specifically the Ed Shaver Custom AMX, which is a blue promotional car sponsored by Hot Wheels to promote the drag racer, Ed Shaver. This version of the car can pull in $4,000 or more.

The only difference between the Ed Shaver Custom AMX Hot Wheel and a regular blue one is the stickers that mirror Shaver’s racing vehicle. This means that before going all-in on an auction, you should try to verify that the stickers are original and not added after the fact to a regular blue AMX. 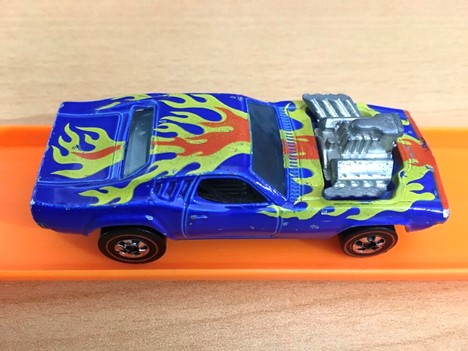 The blue Rodger Dodger, encased in stenciled flames, is one of the rarest Hot Wheels cars due to the rarity of its color alone. Unlike other cars on this list, only the blue Rodger Dodger is rare. The other colors, including yellow, red, and purple, are common in comparison because those are the ones that were mass-produced. The blue ones were made special in 1974 in a batch limited to seven examples.

An English model collector named Bob Parker ended up with all seven of these rare cars, selling them to American collectors without realizing that he had all there was. As a result, he didn’t keep one for his private collection.

This Hot Wheels car, designed by Larry Wood, a former full-size car designer, is based on the ’73 Dodge Charger. It debuted in 1974 in the “Flying Colors” Hot Wheels series with an original run of 5 years. It was then retooled for the 2000s. Only the original blue Rodger Dodger is rare enough for this list. 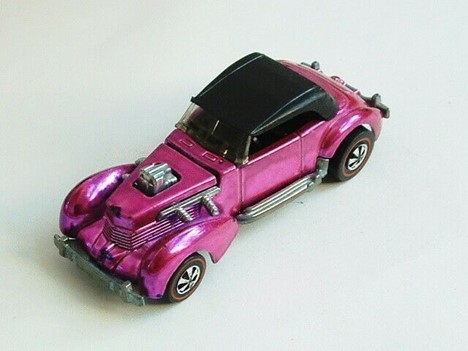 This hot pink or “berry” Hot Wheels car was produced from 1971 to 1972 in many colors. It’s based on the 1937 Cord 812, notable for its exposed engine and sweet fenders. Note the magenta colors are actually very common, meaning collectors will have to keep a sharp eye out for the similar hot pink ones, as well as the other rarities, which are purple, gold, and light blue, according to the Online Redline Guide.

With the right color for sale, this Hot Wheels car can score up to $6,600, as it did in the eBay auction listed here.

Errett Lobban Cord and designer Gordon Buehrig designed the Cord 812, whose 1,146 total units became an instant American classic with the budding collector’s market. They specifically targeted the car to luxury collectors. It’s fitting that the two-year run of the Hot Wheels version of their creation would also become a valued collector’s item. 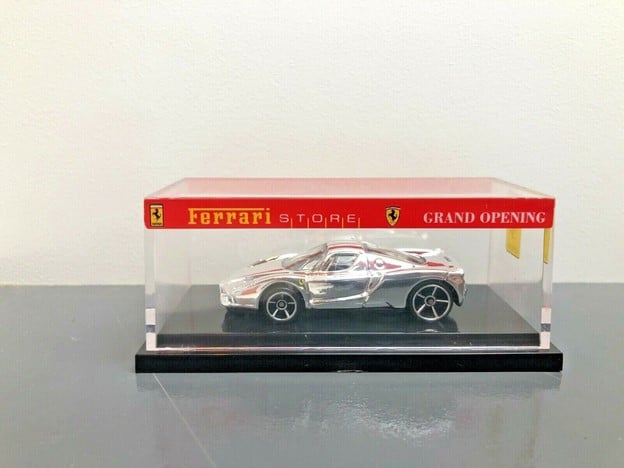 This ultra-rare Hot Wheels car is a tiny version of a chrome Ferrari Enzo, named after the owner of the luxury Italian car manufacturer. In 2010, when Ferrari opened their store in New York City, 100 of these Hot Wheels cars were handed out to Ferrari employees. These were the only ones ever produced, making this chrome toy a 1 out of 100 collector’s item valued at around $10,000.

Since the seller took a best offer, on eBay that means we can’t see the actual ending price. However, it was likely close to the asking price.

Enzo Ferrari is the guy you need when you’re looking for high-class luxury performance in sportscars. His namesake car, the Enzo Ferrari, was created in 2002 to be a Formula 1 racer that consumers could drive on the road, complete with a carbon-fibre body and ceramic composite disc brakes. It even had active aerodynamic systems, something forbidden in real Formula One races. 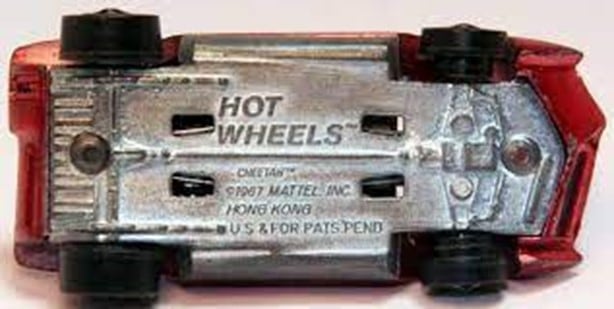 The 1967 Python Hot Wheel was manufactured in Hong Kong. It’s called the “Cheetah” because of that word being embossed on the underside of the chassis, evidently as a potential marketing idea. However, Mattel had not yet acquired the Cheetah license so it changed thiname to Python on the official vehicles.

This makes the models with “Cheetah” on the bottom highly valued Hot Wheels, often selling for $7,000 or more.

Python is a Ford prototype car, not only rare as a Hot Wheels car but rare in real life as well. The designers Eugene Bordinat and McKinley Thompson intended this to replace the AC Cobra (also known as the Shelby Cobra). Production on the Python stopped when Ford and Shelby halted their co-development agreement. 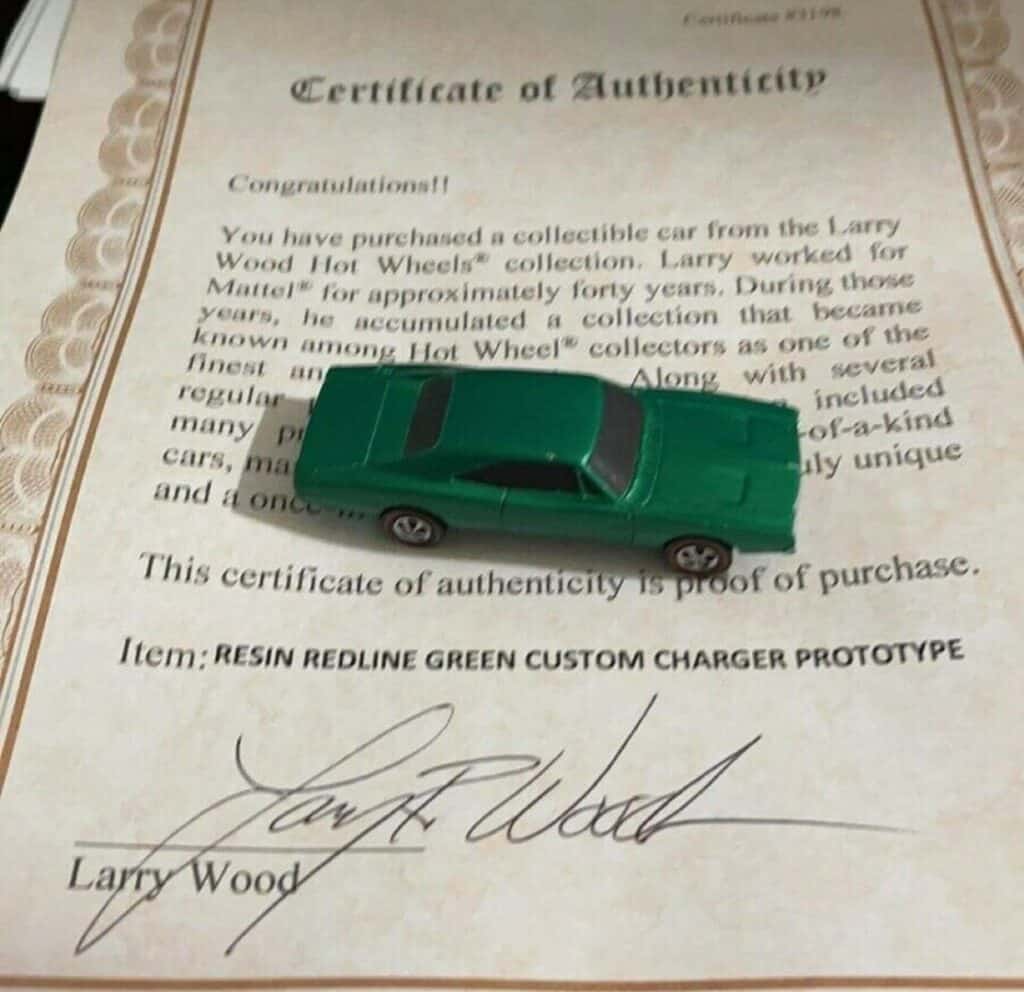 The Redline Green Custom Charger that was sold on eBay in October of 2021 was a prototype production model made of resin. It was sitting in the collection of one of Mattel’s designers, Larry Wood, before being listed on eBay for $20,000. Since a best offer was accepted on this super rare Hot Wheels car, we can’t be sure of the final purchase price.

This car is a one-of-a-kind prototype that represents not only Hot Wheels history but part of its chief designer’s 40-year career.

The two-door coupe known as the ’69 Dodge Charger is one of the most iconic American muscle cars. It was Dodge’s answer to other musclebound flashback vehicles like the Ford Mustang and Plymouth Barracuda. 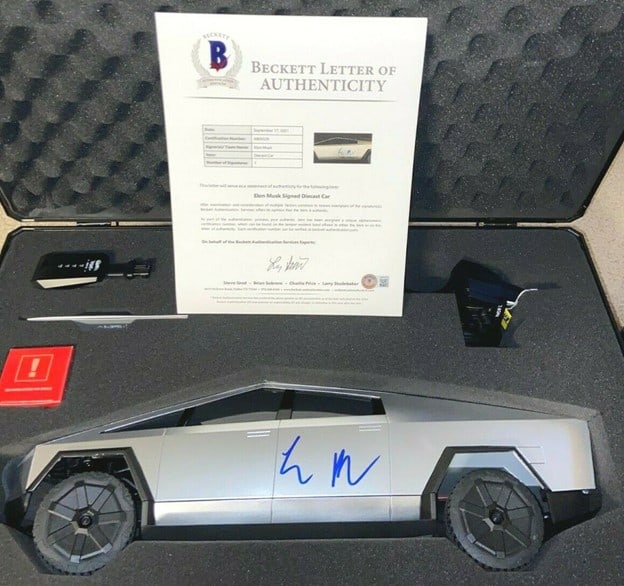 This 1:10 scale Tesla Cybertruck or GXG31-9993 was made in 2021 in a premium, limited edition version. In May, Elon Musk was in New York City for his SNL appearance and signed this car then. That signature, which on this eBay auction comes with a certificate from Beckett affirming its authenticity, is the real driver of the insane price of this Hot Wheel, which comes in a padded case like a handgun.

The auction price is $49,999.99 with an additional $1,999.99 for shipping, which presumably is for insurance and shipping protection for such a small yet expensive product.

The real Tesla Cybertruck, which will debut in 2022, is built from 30x cold-rolled stainless steel, which promotes durability, strength, and prevents dents and corrosion. Even the glass is armored with polymer composites that redirect force after any potential impact. 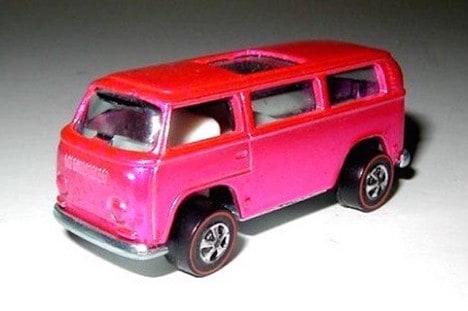 The most expensive Hot Wheel is the Rear-Loading Beach Bomb. This second generation or “T2” Volkswagen Hot Wheel is a VW Bus from 1968 with rear-loading design, noted by the surfboards hanging out the rear.

The car went into production at Hot Wheels’ Hong Kong facility before the chief engineer noted that the car was too skinny for the wheel tracks of Hot Wheels’ latest accessory, the “supercharger.” This set was intended to be a highspeed track for multiple Hot Wheels. However, the Beach Bomb couldn’t stay on reliably.

Due to the heavily anticipated supercharger set, the Beach Bomb was discontinued by Hot Wheels’ marketing departed. As a result, only a few prototype and production models of the Beach Bomb are known to exist, including a bright pink one that is valued at $100,000 or more.

All the production parts for the Beach Bomb were destroyed following this decision, including the sample models, test parts, and more. According to research conducted on the records of Mattel’s corporate offices, only 41 Rear Loading Beach Bomb Hot Wheels still exist. Of these, only five are “transitional” designs, which began in an attempt to correct the model before launch.

For five decades plus extra, Hot Wheels has been the toy of choice in the realm of toy cars. Their replications of real vehicles, licensed promotions, and inherent collectability have made them simultaneously popular and rare. Their collectability hinges on a lot (even a simple palette swap can be the difference of thousands of dollars). But if you’re up for it, they’re satisfying to hunt down.