Gold was discovered at Sutter’s Mill, California by James W. Marshall in 1848. The discovery led to the famed Gold Rush, a period of intense immigration as people hunted for gold. In 1847, San Francisco had a population of fewer than 500 people. That grew to more than 20,000 within a few months of James Marshall’s discovery.

By 1850, California had joined the Union, becoming America’s 31st state. Five decades later the state was home to more than a million people, five more and that number reached 10 million.

In 2022, California is home to well over 30 million people. The legacy of gold and other lucrative industries makes the state an expensive place to live.

Learn more about the most expensive cities in California with this top 10 list! 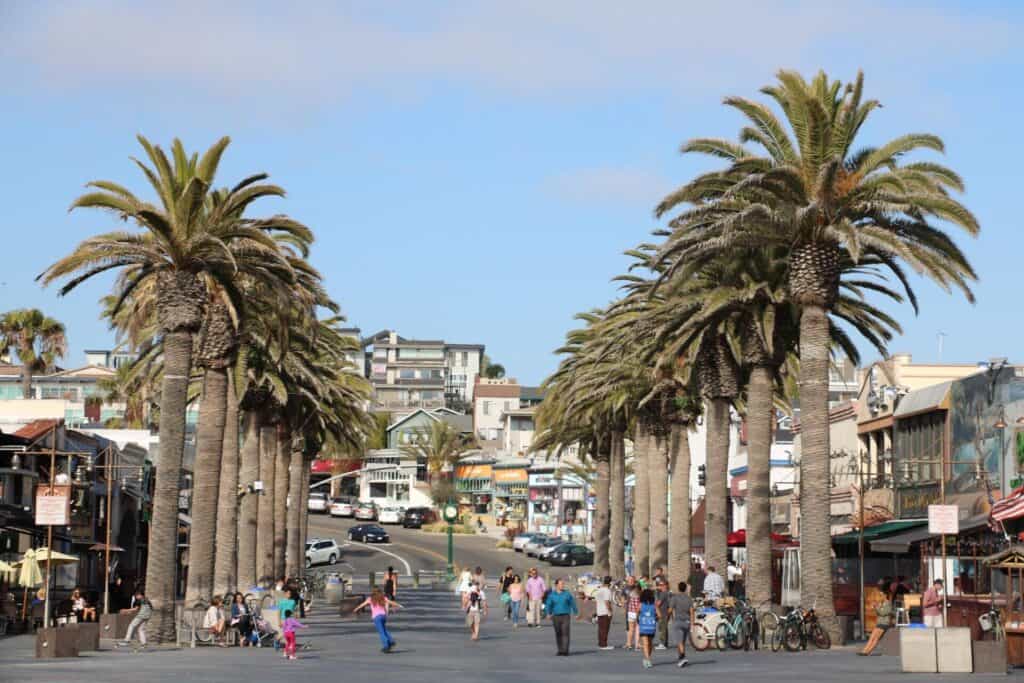 The popular city of Hermosa Beach is home to more than 90 acres of public beach space known for its surf, swimming areas, and nearby shops and restaurants. Hermosa Beach Pier is a tourist favorite, while locals enjoy picture-perfect neighborhoods with a classic California vibe.

Based on the median home sale price, Hermosa Beach is California’s tenth most expensive city. As of 2022, half of the houses in the city are worth more than $1.9 million, or $1,400 per square foot of living space. 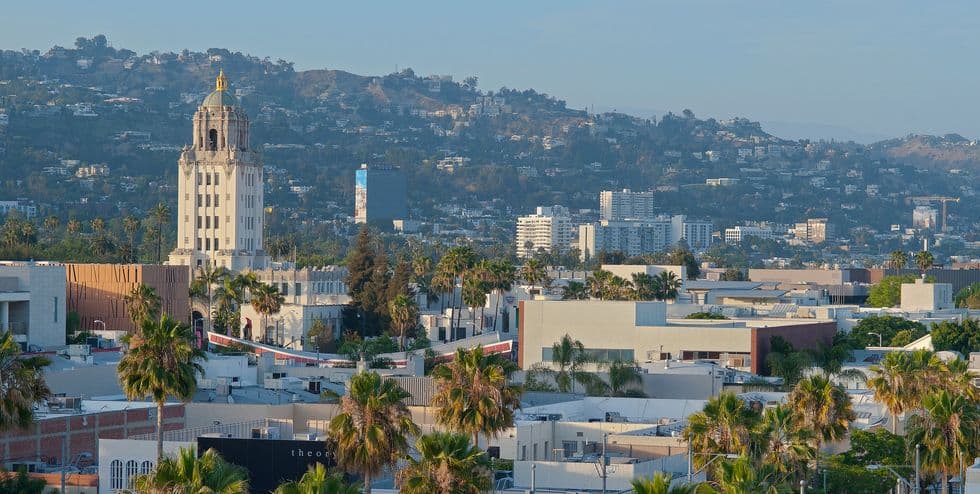 Beverly Hills might just be the most famous city in California. The affluent area is known for tourist hot spots like Rodeo Drive, an iconic shopping district known for expensive brands and wealthy shoppers.

The surrounding city of Beverly Hills is home to high-power executives and Hollywood celebs alike — and home prices are as high as you’d expect.

Half of the houses in Beverly Hills are worth more than $2.9 million, with the most expensive going for upwards of $20 million.

Beverly Hills got its start in 1907 when developer Burton Green established a subdivision in Los Angeles County. The subdivision was incorporated as Beverly Hills a few years later in 1914. 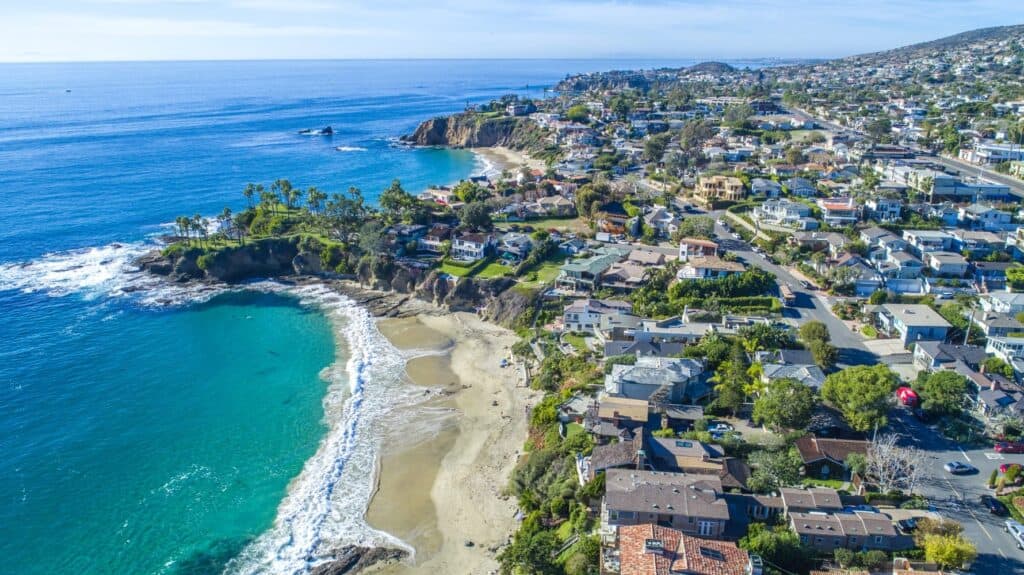 Laguna Beach is a coastal city in Southern California known for its idyllic scenery and expensive real estate. The area is home to about 23,000 people as of 2022, and half of the area’s houses sell for more than $2.9 million.

The city’s stunning coastal setting plays a big role in those steep prices. One local real estate agent says living along the Pacific is amazing, “The Laguna Beach lifestyle is — in a word — awesome!” She also says the city feels like an “escape,” offering streets lined with palm trees and the relaxing sounds of crashing waves.

Laguna Beach has a vibrant arts scene, including local museums and a variety of creative arts festivals. 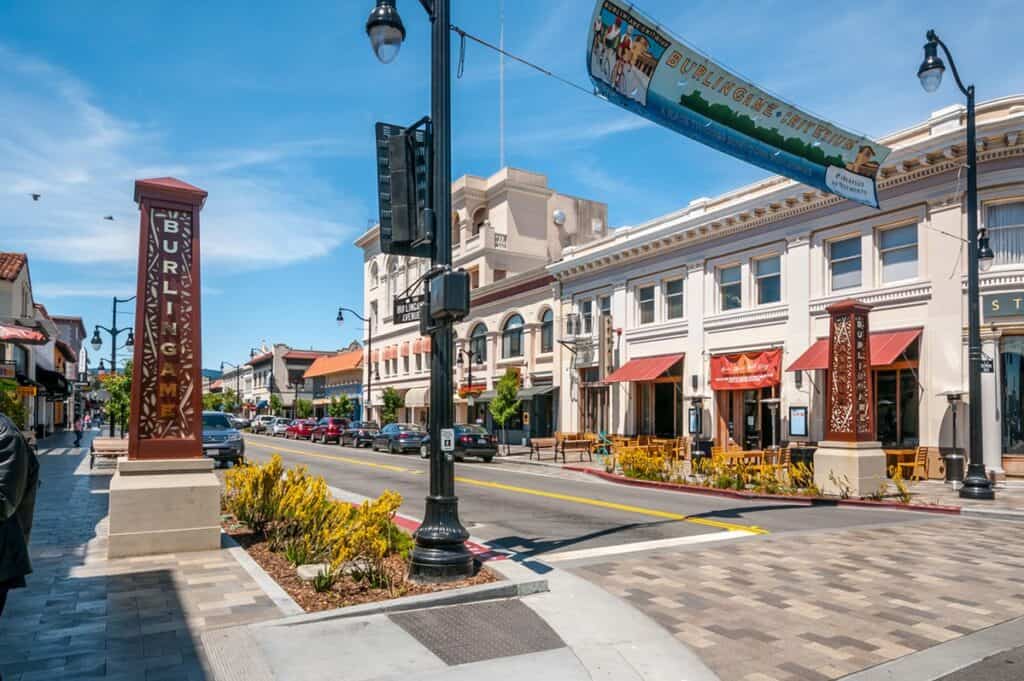 Known for its high quality of life, Burlingame is home to about 30,000 people, including many young professionals and families.

The area is sometimes called The City of Trees because of its beautiful blend of urban and natural spaces, and the area’s proximity to San Francisco makes it a popular option for quieter living without giving up big-city benefits. 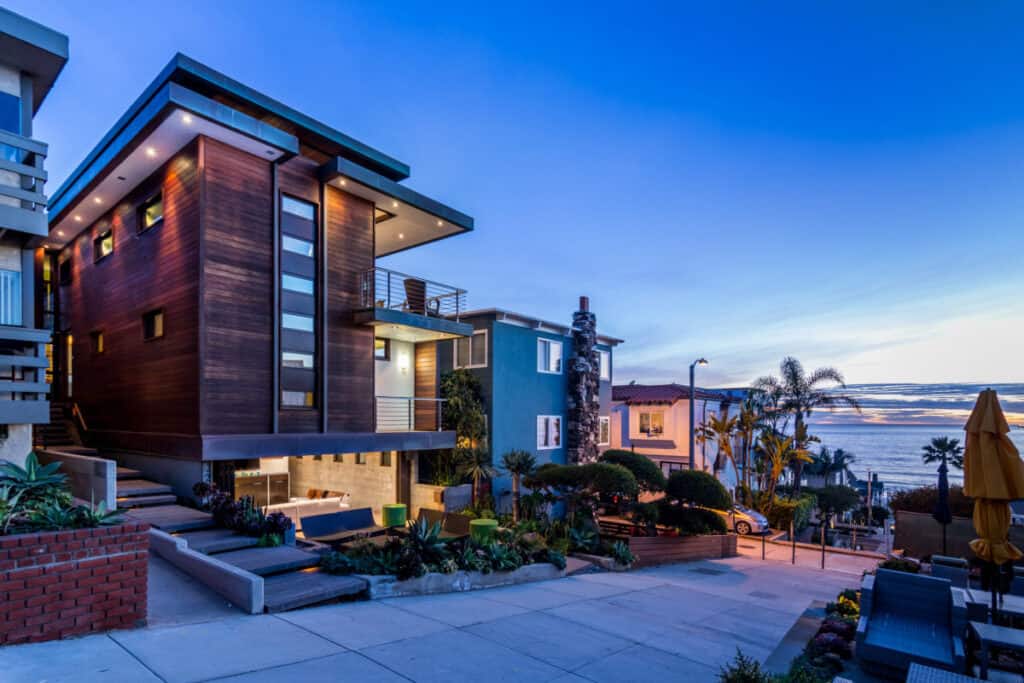 The city of Manhattan Beach is known for luxury beach-side living. Expensive houses, beautiful streets, and palm trees are plentiful, while ocean activities like surfing are staples of the shoreline community.

A typical house in Manhattan Beach costs millions of dollars, and half sell for more than $1,400 per square foot of living space.

Beyond pricey real estate, Manhattan Beach is home to the International Surf Festival and the famous Manhattan Beach Pier. Tourists are easy to spot along the shoreline, while local families enjoy top-quality schools and beautiful weather.

As of 2022, one of the most expensive houses in Manhattan Beach is valued at more than $30 million. 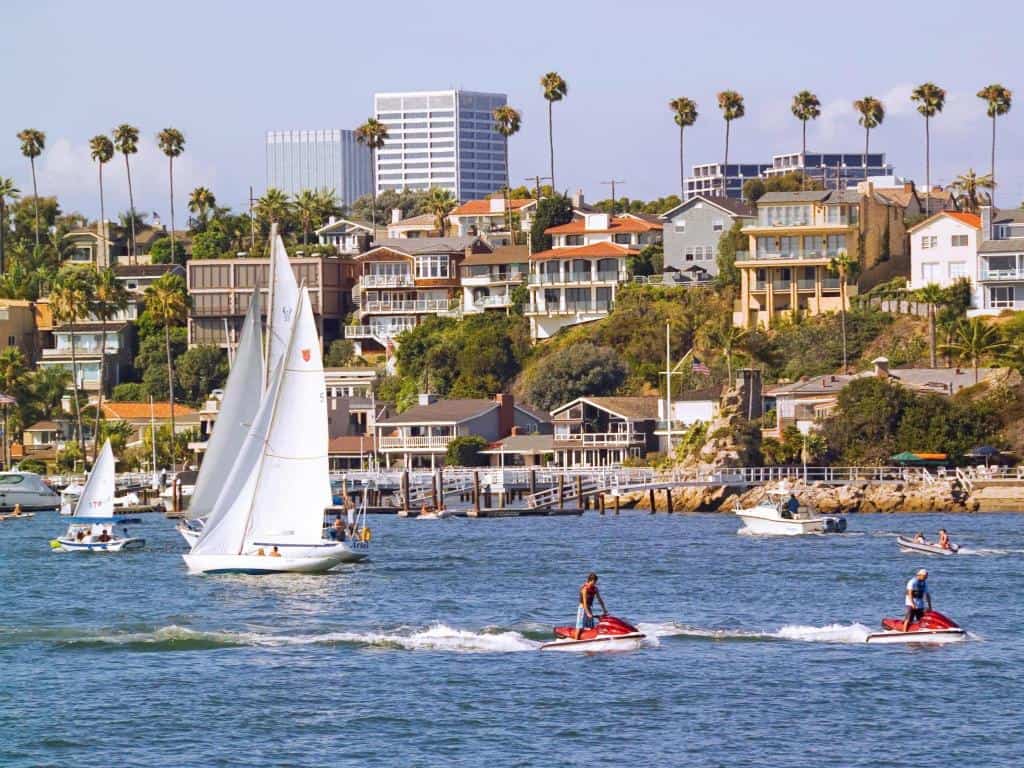 Newport Beach is home to Balboa Island, a small community accessible by bridge or ferry. The island is filled with cottages and a small shopping district where you can buy a variety of pricey products.

The Newport Beach shoreline is often dotted with sailboats, while the city offers ice cream shops, boutiques, and more.

Newport Beach is the fifth most expensive city in California as of 2022, with a median home value of more than $3 million. Would you live in this pricey city?

Newport Beach is located in Orange County and sits about 50 miles from downtown LA. 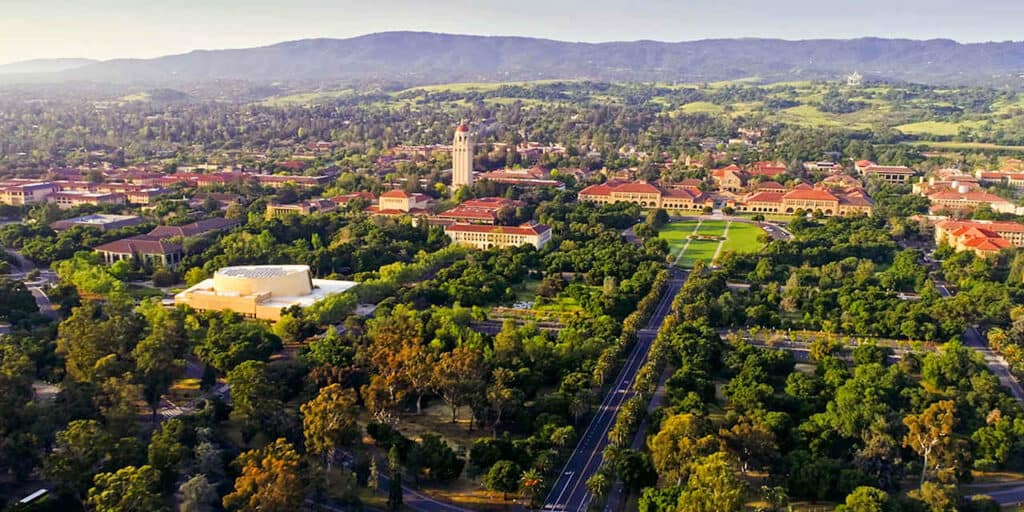 Home to Stanford, the city of Palo Alto is a popular community for rich CEOs, academics, and venture capitalists. The affluent community of more than 60,000 people features a blend of urban and natural aesthetics, with foliage and expensive houses making regular appearances.

Stanford University is one of the world’s leading private schools. The university is known for its medical and law schools, as well as high-profile alumni like Justice Sandra Day O’Connor and President Herbert Hoover. 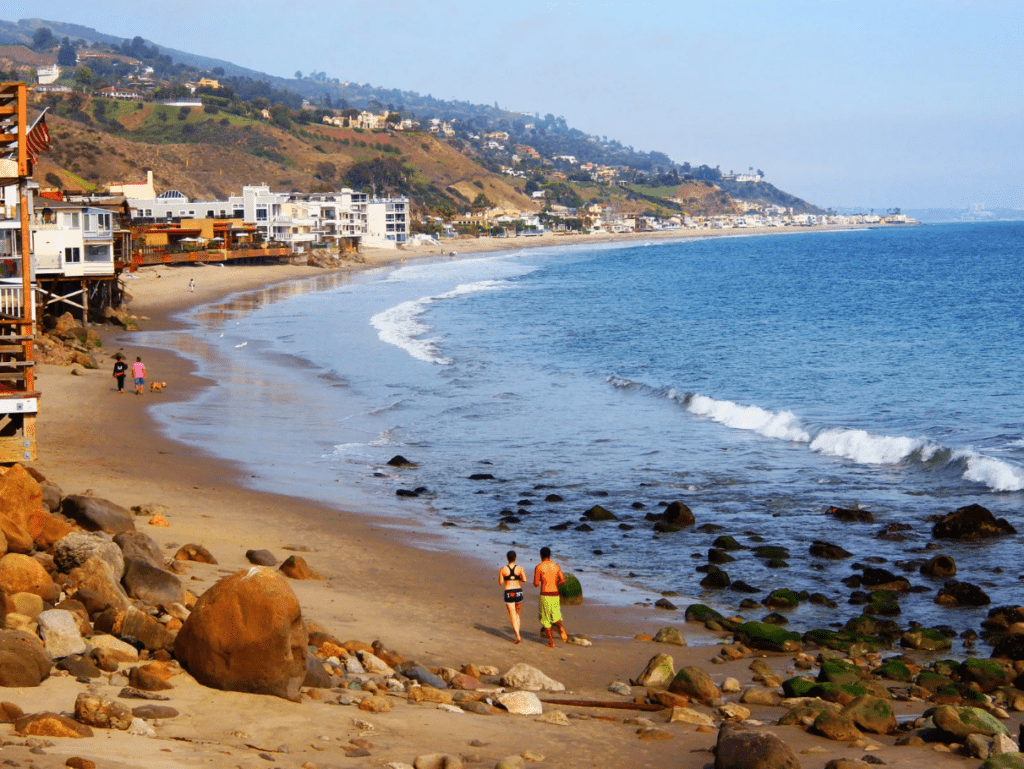 Malibu is one of the most famous beach towns in all of California. The city is home to Hollywood elite and high-profile athletes alongside the state’s richest businesspeople. Spanning 30 miles along the ocean, the city offers an unparalleled beachy vibe and stunning sunsets each night.

Malibu is gorgeous — and that beauty comes with a steep price tag. The median Malibu house is worth more than three and a half million dollars, making it California’s third most expensive city.

If you can peel yourself away from the beach, Malibu offers a variety of on-land attractions, including restaurants and boutiques.

Santa Barbara blends natural wonders with the cultural attractions of a medium-sized city. Channel Islands National Park sits just off the Santa Barbara shoreline, offering an archipelago where you can hike, snorkel, and kayak. On the mainland, visitors explore a variety of museums, restaurants, shops, and more.

Overall, Santa Barbara has a median home sale price of $3.6 million. The expensive area is home to more than 90,000 people, and the area’s most expensive homes sell for well over $50 million.

As of 2022, the median price per square foot is over a thousand dollars.

There are 30 neighborhoods within Santa Barbara’s city limits. 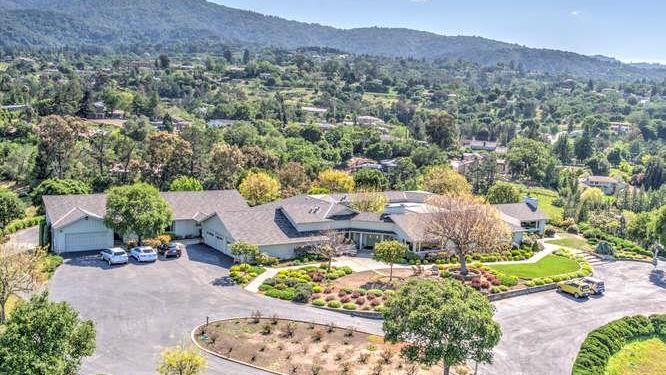 Los Altos is the most expensive city in California.

Houses in Los Altos are expensive too. The median home is worth nearly four and a half million dollars — making Los Altos the most expensive city in California.

Steve Jobs founded Apple in Los Altos. Today, Apple is based in Cupertino, another extremely expensive city in Silicon Valley.

9 Rarest Lunar Events to Watch Out For