Weed is incredibly popular, especially in the West and Northwest United States, as a way to get relaxed and stress-free. It also has medicinal value when used appropriately, such as for people with chronic pain, panic attacks, low appetite, social anxiety, traumatic stress, and more. The list goes on.

Not all strains of cannabis are made equal, however. Some, either due to rarity, the quality of breeding, or sheer strength, can be extremely expensive. In this list, we’re counting down the 9 most expensive weed strains that you can buy, including what they look and taste like and the effects that have driven up their prices to exorbitant amounts. 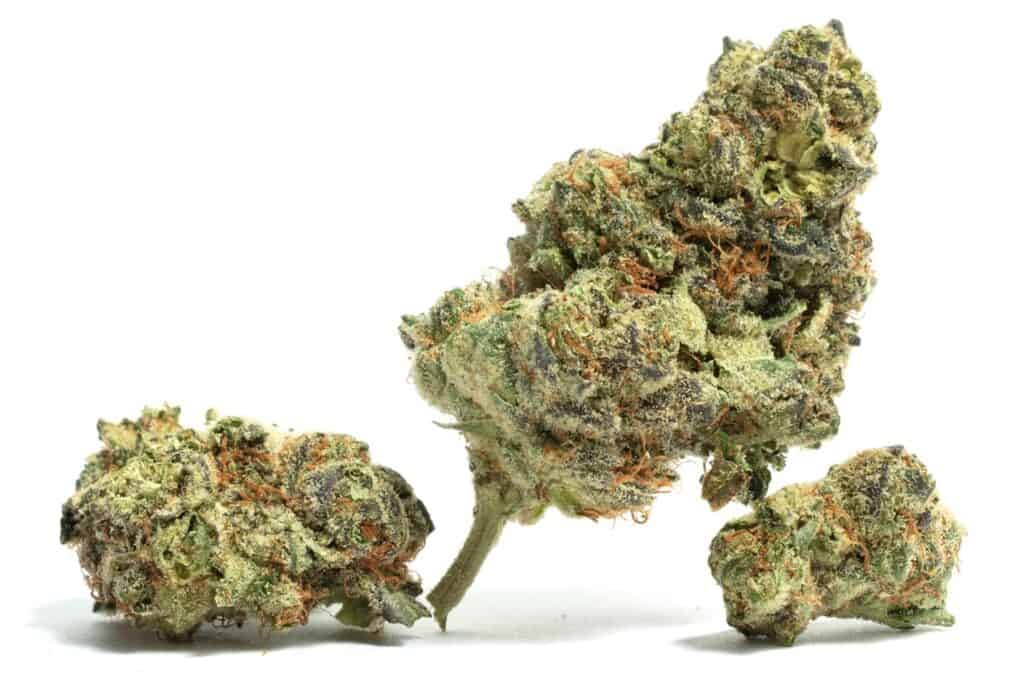 White Fire OG, like a lot of high-selling strains, has a super high THC level of 28% on the high end. Its genetics include famous parents, Fire OG and The White, which gave White Fire OG its scent of sour diesel and its sweet, earthy taste.

The strain is known for making its users feel creative, relaxed, and euphoric. This makes the strain a good choice for creative users that want to get ahead in their hobbies. A day spent knitting, drawing, or just relaxing, would be a good fit for this snackiness-inducing, Indica-dominant strain. It costs around $260 per ounce.

White Fire OG can make users feel less in pain, as well as less physically stressed during difficult medical treatments like chemotherapy. It can boost appetites as well as reduce pain and nausea in the right doses. 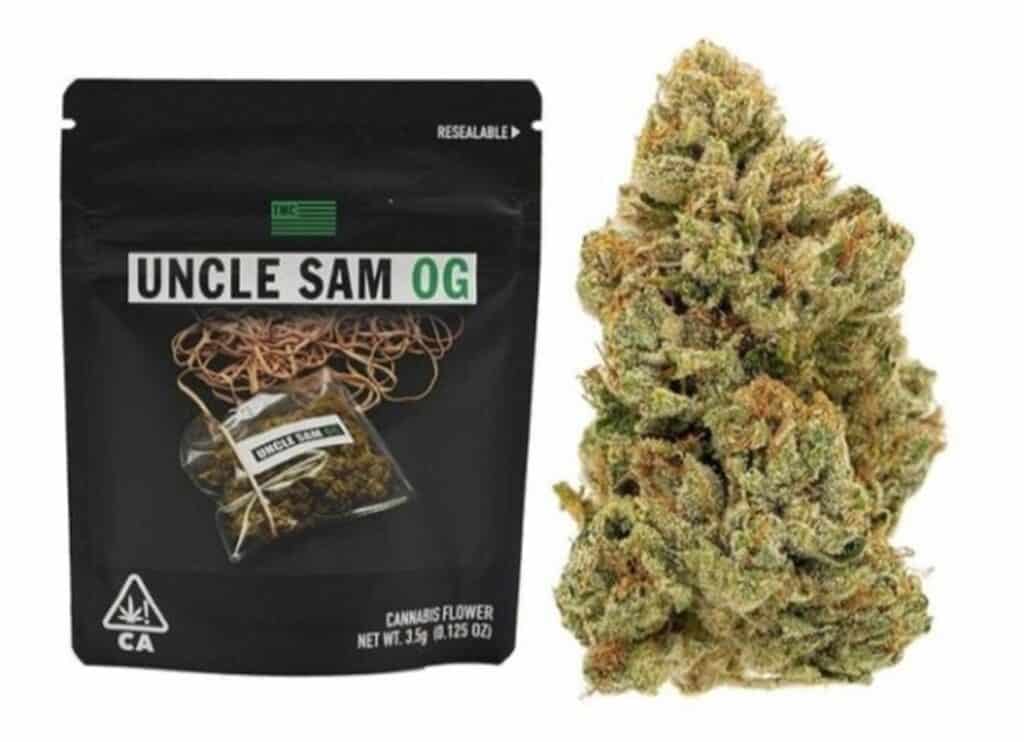 Uncle Sam OG is a true-blue American strain by the breeders at Exotic Cannabuds, who named it after the energy of Black Sam, a strain that was part of the Marathon Cultivation. On the high end, Uncle Sam OG can have a THC level of 26%, which means that novice users should stay clear of this ultra-powerful bud.

The high of this strain is both mental and physical, creating a sensation of uplifting euphoria that encourages relief from stress, pain, depression, and fatigue. Its effects have become so well-known that Uncle Sam OG can self for $320 per ounce these days. 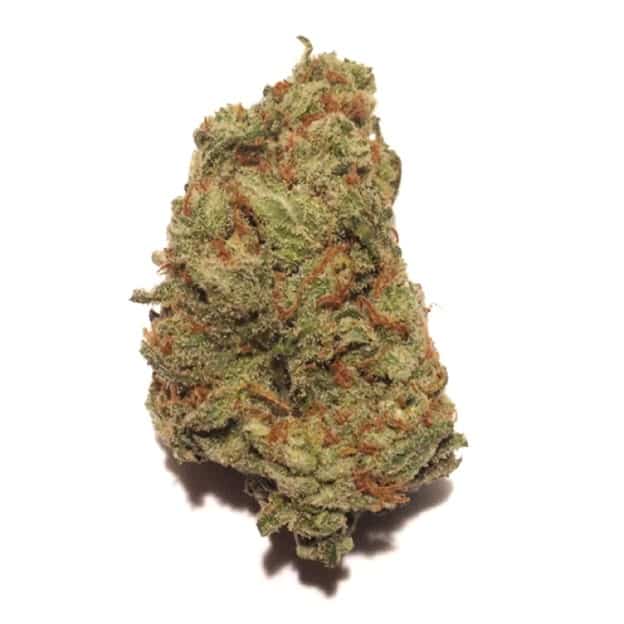 J1 is a strain whose genetic lineage crosses with another on this list, being derived from the popular Jack Herer strain. In this case, it’s crossed with Skunk #1 to create this bud, which has dense nugs that are thick with crystal trichomes and a pungent, herbal smell.

On the inhale, the J1 strain can be very spicy as it uses its 24% THC to make your brain and body energized, focused, and happy. On the exhale, the flavor transforms into something much sweeter and fruitier. The strain can cost $350/oz from the bigger dispensaries, but users love the strain for its flavors and potential medicinal properties.

Strains like this with high THC and appealing flavors can often cause an increase in appetite, resulting in well-known cases of the munchies. However, J1, which has a sweet berry and rosemary flavor with overtones of spiciness, is more known than most for helping users who suffer a loss of appetite (whether from stress, medical treatments, or other issues) to increase their hunger during the long week. 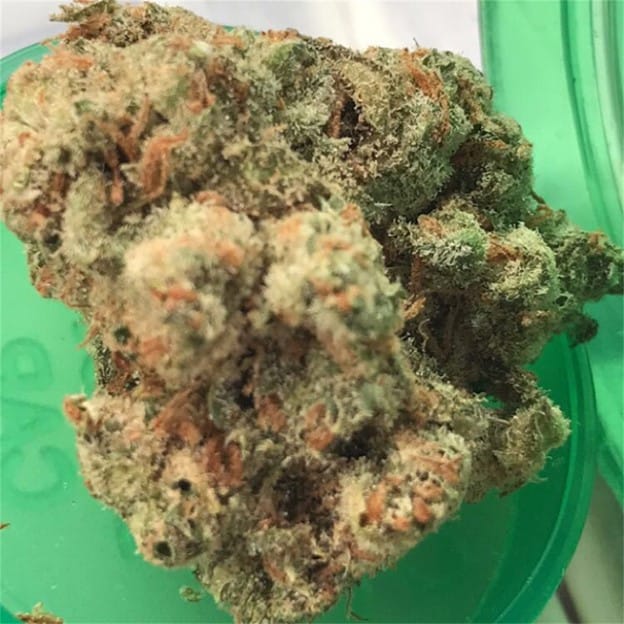 The hybrid strain known as XJ-13 is 50/50 in terms of Indica and Sativa and has a THC content of up to 22% on the high end. The strain was bred as a genetic cross between G-13 and Jack Herer strains, which imparted their upstart kid with incredible flavors and cerebral, body-buzzing effects.

Users can expect flavors of sweet and spicy herbs on this strain, with hints of pine and lime on the exhale, as well as a strong and funky aroma. The strain sells for $375 per ounce, so you should expect a lot from it. The strain delivers on expectations with euphoric creativity and a ton of useful effects (see below).

XJ-13’s medicinal properties are well-known to those who have used it. The strain’s physically and mentally relaxing properties allow it to potentially calm down muscle spasms and reduce mood swings. This could have therapeutic implications for people who suffer from ADHD, manic depression, or chronic pain conditions. 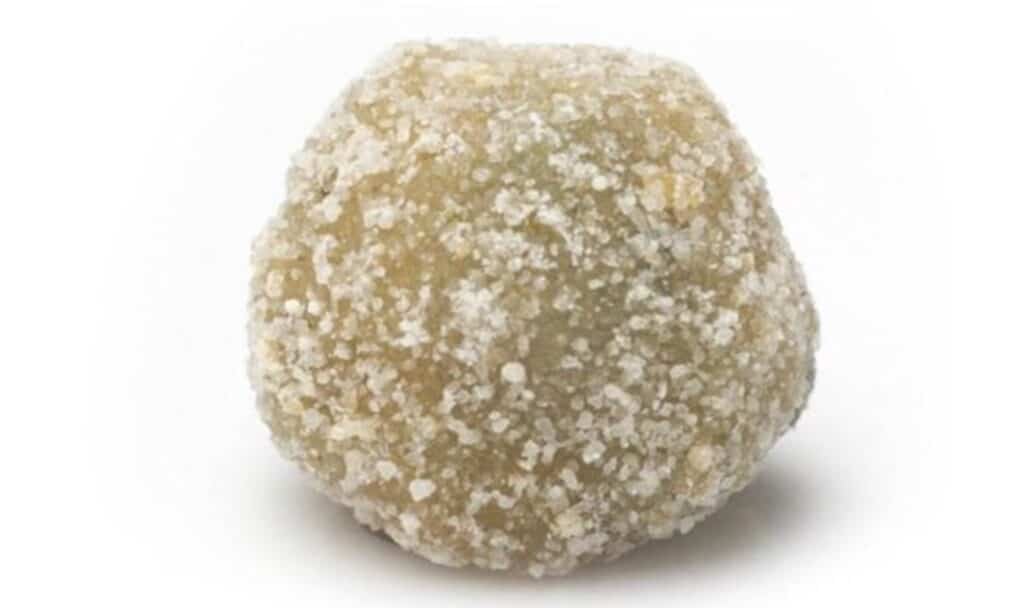 Dr. Zodiak’s Moonrocks Ice, other than winning the award for probably the most amazing name ever to grace a nug, is a strong, selectively bred strain known for its sky-high THC and cerebral effects. To be fair to the other strains on this list though, it isn’t your average cannabis.

Moonrocks Ice is what’s called a THCa Crystalline, which takes pure THC from a strain and converts it into a vapable “rock” that can deliver enormous impact, in this case, a concentration of THC up to 99%. This is why the strain often sells for $400 per ounce (sometimes more).

THCa Crystalline is a condensed form of cannabis that uses various strains to create ultra-powerful material for smoking, vaping, and more. Afghani, Northern Lights, Skunk #1, and Shiva are four strains that went into Moonrocks Ice. 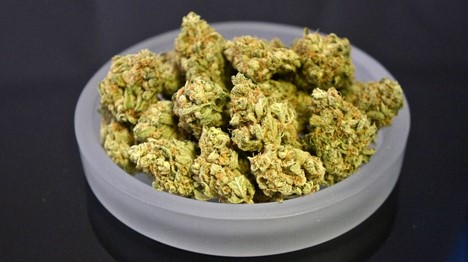 Isla OG is an intense strain with THC levels that can get up to 27%. It was bred by L.A. Island, Inc and has become infamous for its prices, which can get up to $800 an ounce if the grower is protective of its creation. These mid-sized, light green buds are well known for their skunky aroma and a Kush/citrus flavor.

The strain brings on sensations of euphoric creativity, making it a great daytime strain that leaves its users motivated and happy, rather than sedated (assuming they can afford it first!).

Isla OG is a genetic cross between the Hawaiian and OG Kush strains, which is where it gets its skunky smell as well as its effects of relaxing euphoria. The popularity of the parents is a big clue to the value of this exorbitantly pricey bud. 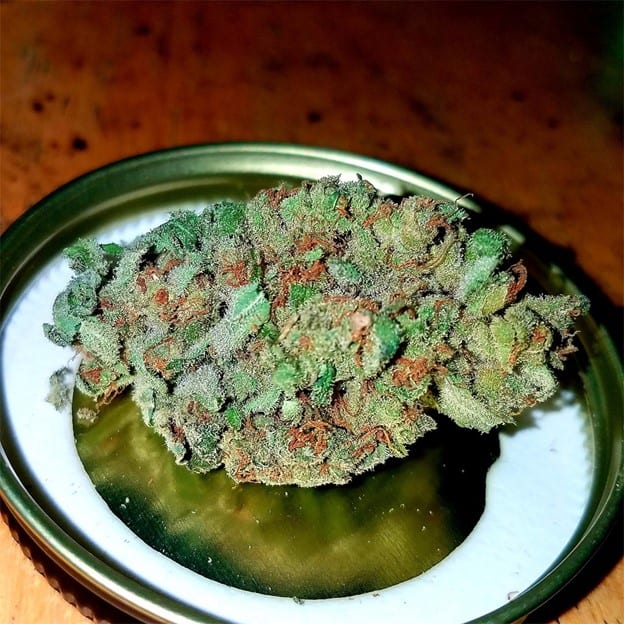 Loud Dream is a Sativa-dominant strain that hits hard and fast. It brings on a euphoric, giggle-inducing buzz that can make you feel energetic, happy, giggly, focused, but also a little dizzy and nervous if you aren’t careful. This is a strain that needs to be dosed properly depending on your experience level.

It has a sweet taste, which it got honestly from its parents, two cultivars of Blue Dream F1 bred together. These dense and chunky buds rack up serious value when they come out right, selling for up to $800 per ounce to give people that incredible sensation users rave about.

This strain’s balance of euphoria and relaxation makes it a great pairing with low-key but active hobbies. Use this strain when you want to go for a walk or out to eat, to focus on your art, or go do something fun like a trip to a casino or a bar. 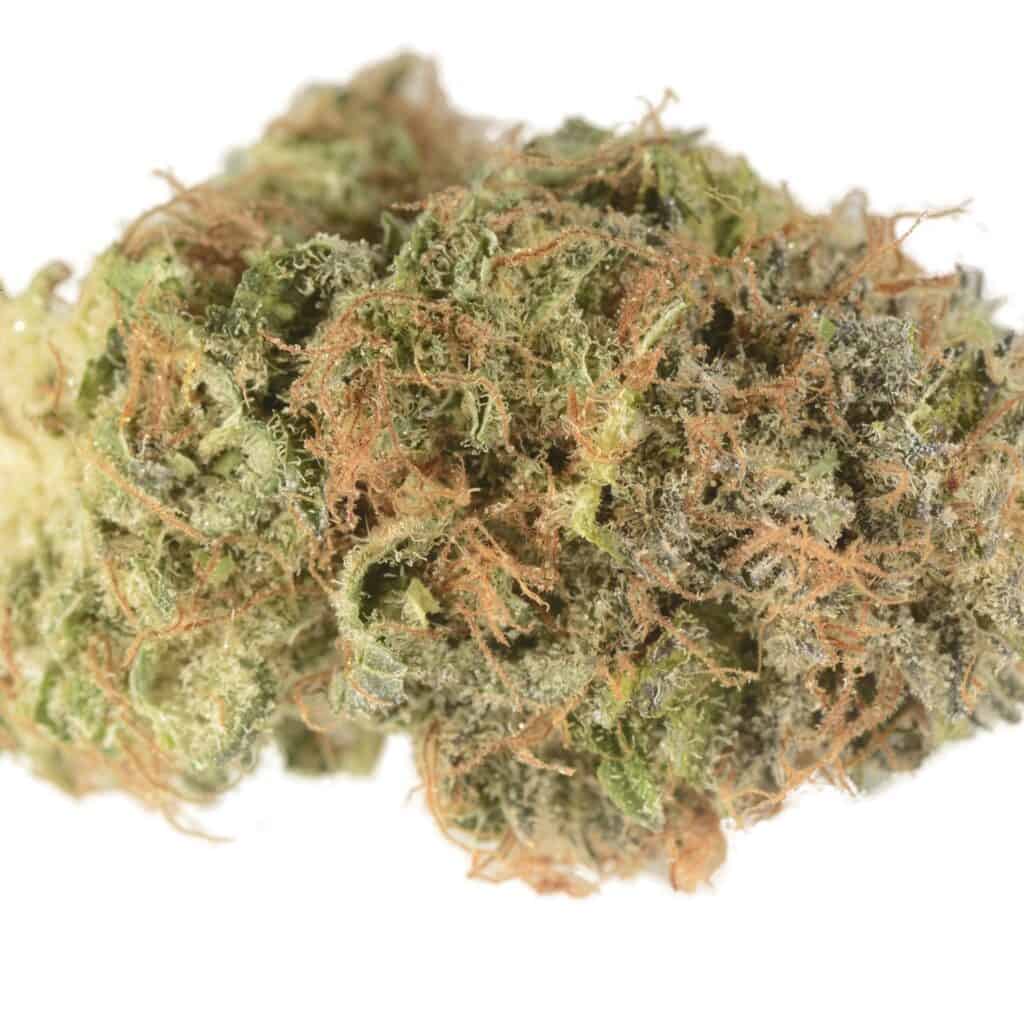 Oracle’s genetic origins are shrouded in mystery, though it started to crop up (literally) in 2009, made famous by THC levels as high as 45% when bred properly. The Oracle strain is in a class all its own.

The strain’s aroma is highly sweet and herbal, reminding the user of sugar-coated berries and sweet earth. The flavors you can expect include skunky, overripe fruit and hints of sugar and basil. This is if you can convince yourself to shell out $800 for an ounce of this strain, of course.

The strain’s lemon-earthy flavor is known to team up with that THC to give users extreme boosts of happiness and creativity. This is why the strain comes recommended for afternoons spent inside with a good book. 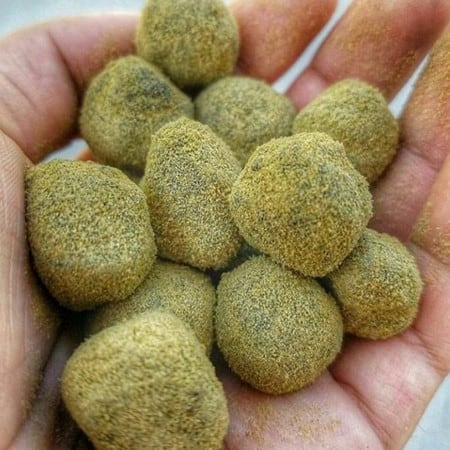 The most expensive weed is Cannabis Caviar. A dispensary in Denver, Colorado known as the ReLeaf Center sells Cannabis Caviar, a strain that doesn’t come by its powerful effects or its value naturally. Normal buds are steeped in hash oil (often sourced from the powerful Grape Ape strain) to create this monster, turning them into powerful brain-busters.

The result is a bud that has absorbed so much THC that it can measure up to 91%, making it the most powerful strain anywhere. Renamed Cannabis Caviar after the strain most commonly used to start the process, OG Caviar, the effects you’ll get on this $1,400/oz bud will be worth the price – hunger, giggles, happiness, euphoria, and finally sedation.

Despite the name, OG Caviar is not the only strain that breeders can use to create Cannabis Caviar. Other possibilities include Mango Tango and Lemon Meringue strains.

8 Rarest Spices From Around The World