In practically any neighborhood in the United States, you can see stray cats darting from cars and rifling in the yards. These cats often have motley patterns – you’ll see boots, speckles, spots, stripes, patches, and everything in between.

Some cat patterns are rarer than others, however, and most can’t be seen running loose in the wild. As opposed to the normal assortments of cat colors that you’ll see skitching out of sight when you go into your backyard, these colors are rare, expensive, and usually only occur through careful breeding. Here are the 8 rarest cat colors. 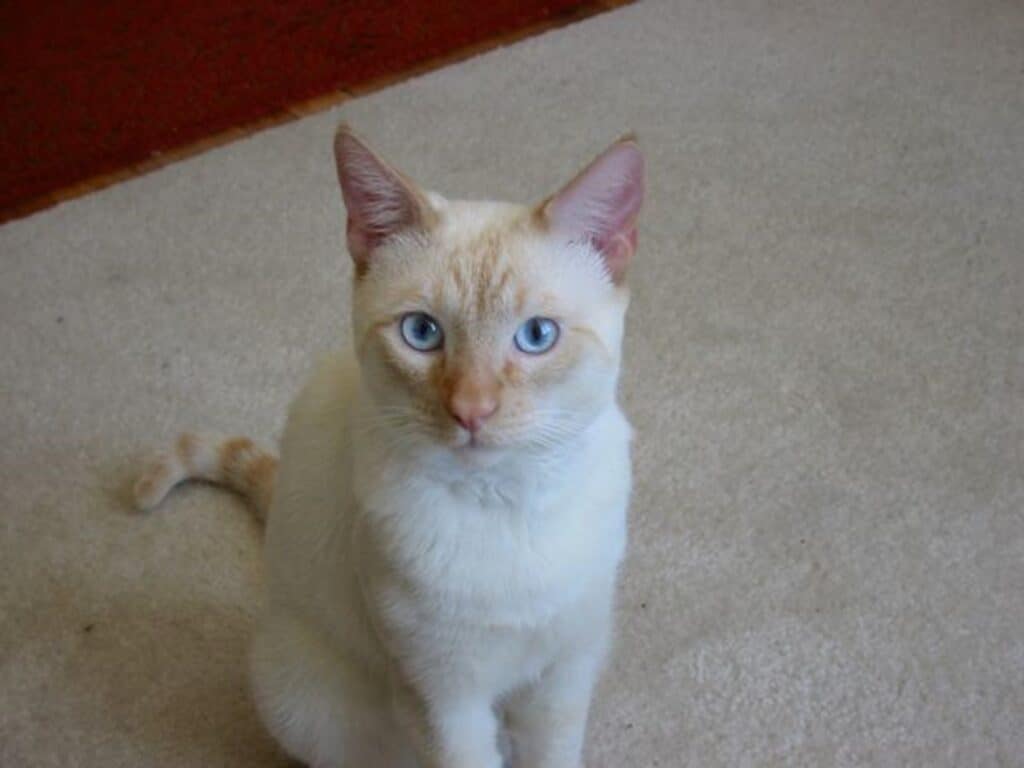 Colorpoint cats have white coats that are speckled with color, particularly on the face and tail. There are 16 possible point colors, and all derive from Siamese genetic lineage when crossbred with American Shorthair cats. The World Cat Federation recognizes Colorpoints as a unique breed, though many organizations do not.

These pointed cats generally come with color patterns in chocolate, blue, lilac, and seal, which are the recognized Siamese color variants. However, there are other variations, including Flame Points (Red) and various patterns like tortoiseshell and lynx.

Colorpoint Siamese cats are common for the breed and cost about as much as any Siamese. In other breeds, however, Colorpoint patterns result from repressed albino genes that cause pigments to form in sensitive areas like the face but not in others. Due to the presence of Albino genes, Colorpoint cats often have blue eyes, even in breeds where this is uncommon. 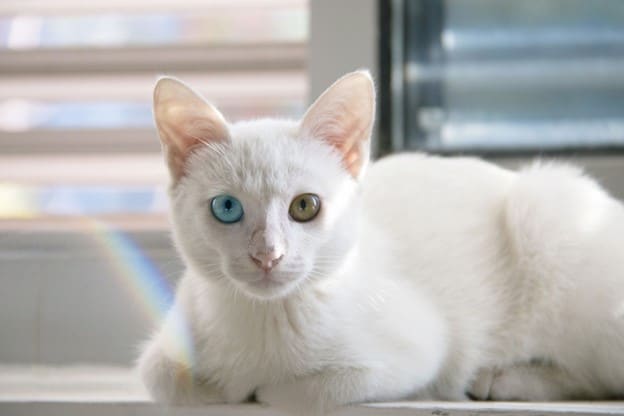 White cats should not be confused with Albino cats (see below). However, they are also incredibly rare because like natural blondes in humans, white cats require specific recessive genes to block the transmission of color codes to their hair. In cats, this occurs about 5 percent of the time (in humans, it’s more like 3 percent!).

White cat breeds like the Turkish Van and Angora can set you back over $1,000. There’s no accepted price of white cats occurring in other breeds since it depends on their comparative rarity and health.

White cats deal with deafness a lot, potentially due to a gene piggybacking on the recessive alleles that also make their hair white. This has made them subjects of experiments that hope to treat hearing loss in humans. They’ve been a big help in this area! 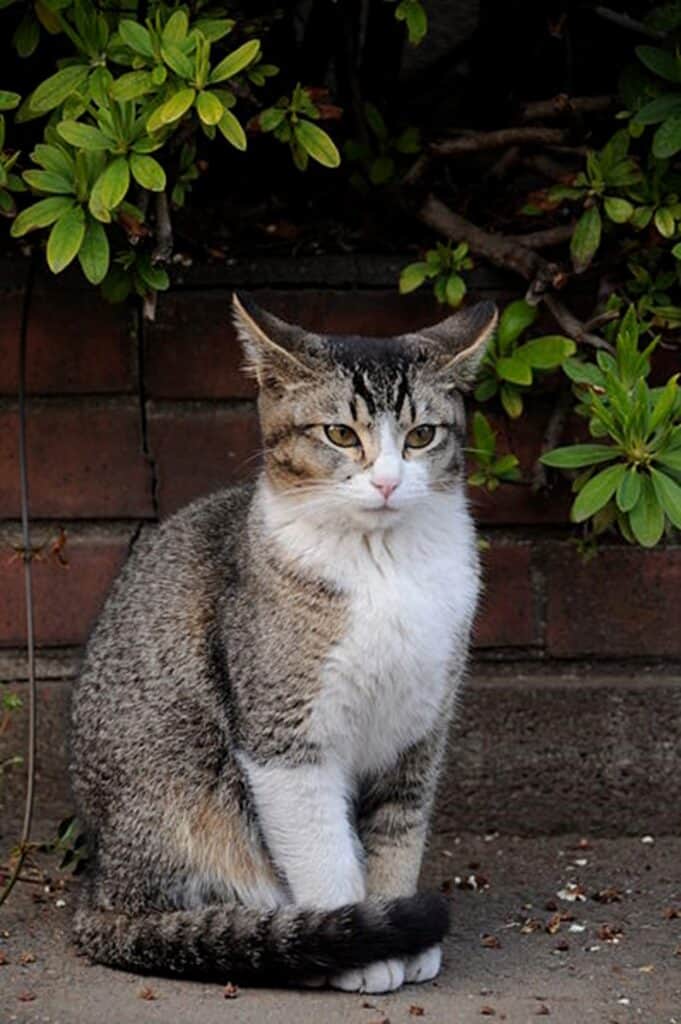 Tabby cats are well-known in their natural forms as Mackeral Tabbies, which are grey and splotched. Classic Tabbies are marbled and striped with black. Rarer breeds include Spotted and Ticked Tabbies, which have no stripes. These are more common in Abyssinian cats.

The typical tabby can cost as little as $100. However, the rarer breeds like Ticked Tabbies, bred without stripes and genetically pure, can cost thousands of dollars.

Tabby cats have long been involved in folklore. In Egypt, the word for cat, “Mau,” derives the letter “M,” as well as the common notation for the sound of a cat. In Islam, a tabby named Muezza appears in the Qur’an when it saves Mohammed from a venomous snake. 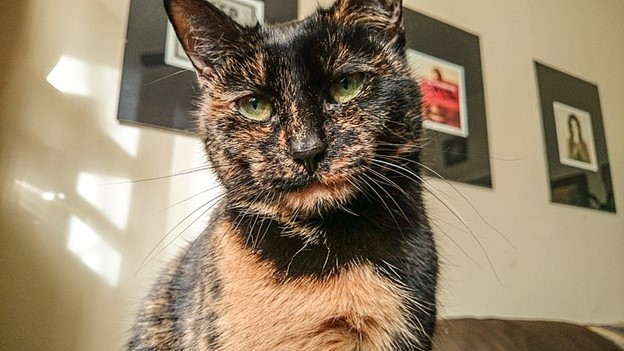 Tortoiseshell colored cats do not belong to a specific breed. They are noted by a coat that mixes and mottles two coat colors – Red and Black – into a swirling pattern that’s different on every cat. These cats have no white mixed in, but the mix of colors can sometimes appear to have gold, gray, orange, or chocolate in it.

These cats are affectionally called “Torbies.” In many cultures, as diverse as Japan and Ireland, Torbies are considered to be good luck. A reputable breeder will sell a Torbie for $1,500 or more.

Almost every Tortoiseshell cat is female. Only about 1 out of 3,000 Torbies are males due to the fact that the chromosome that creates the Tortoiseshell color is only in the X chromosome. Thus, a male Torbie actually has to have an extra X chromosome, since all males have a Y as well. This may be why the ancient Celts in Ireland thought that keeping a male Torbie in their home would bring good fortune. 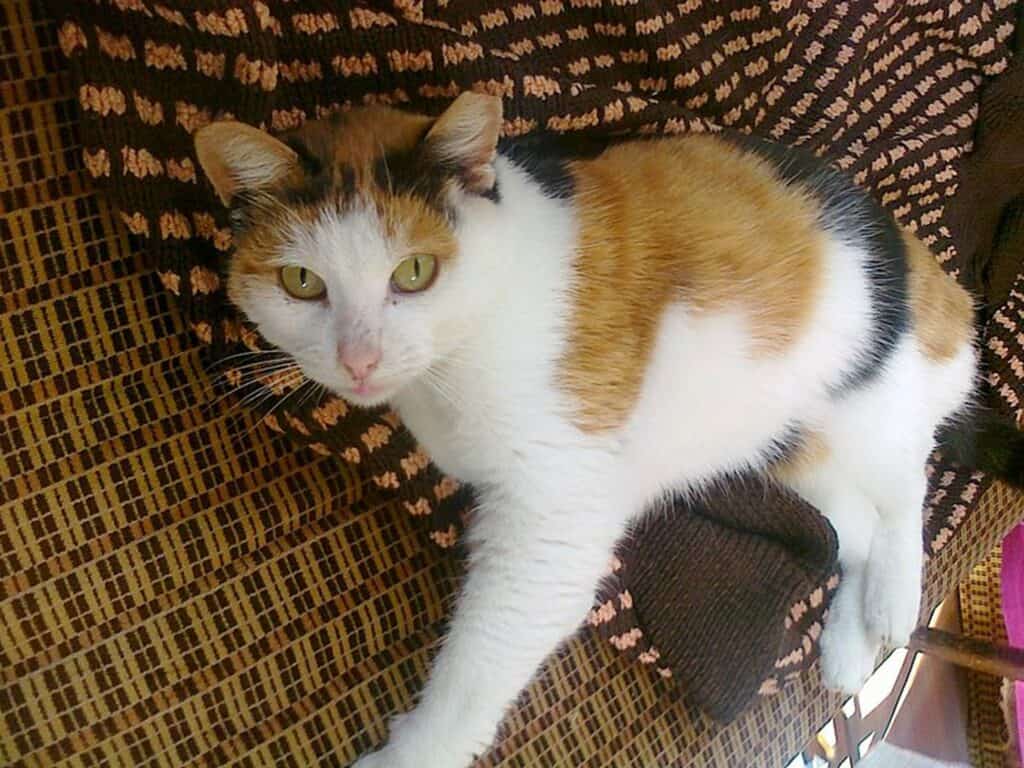 Calico cats are tri-colored breeds noted by a white base coat with stripes of black and orange on their face, back, and tail. These colorful fur patterns vary and are highly sought after, costing $2,000 or more for healthier specimens, especially males. Only about 1 in every 3,000 Calico cats are born male.

There are three possible Calico types: standard, the white coats with tri spots, dilute, which have smoky gray spots, and calibby, which is a mix of patches and stripes that appears similar to a tabby pattern.

“Calico” is not a word that only refers to cats. It has been used since the 1700s in America to refer to printed floral patterns in décor. The cats got the name because their diversely colored coats reminded owners of the print design. 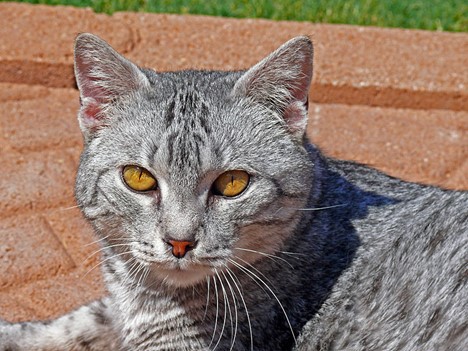 Silver cats refer to both colors and patterns and can occur in many breeds. The price of these cats varies because there are three possible patterns in silver coats that could be more or less desirable depending on demand. In general, a silver coat is denoted by hair that is only colored at the tip, which gives the cat its smoky appearance.

The silver patterns could be striped where the coat has full color, shaded, where even less of the coat has color, or just tipped, which means that only the smallest part of the coat is colored. Well-bred Silver cats with a desirable pattern can cost $2,500 from a reputable breeder.

The cat color known as Chinchilla is actually a Silver pattern that leans towards color tips rather than shades or stripes. 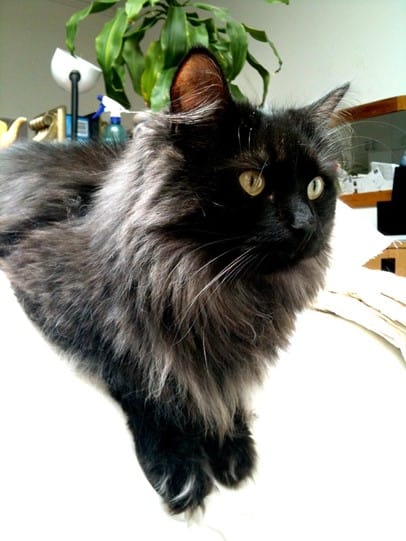 The Black Smoke cat color is fascinating to see in motion. Their coats are solid black but white at the roots, which makes them appear to be wavy or patterned as they move. The first Black Smoke cat was seen in the 1800s when, according to some theories, a tabby with the gene for black markings bred with a silver-white coated cat and the two colors layered on top of each other in the kittens.

Black Smoke kittens can cost more than $3,500 from a reputable breeder. 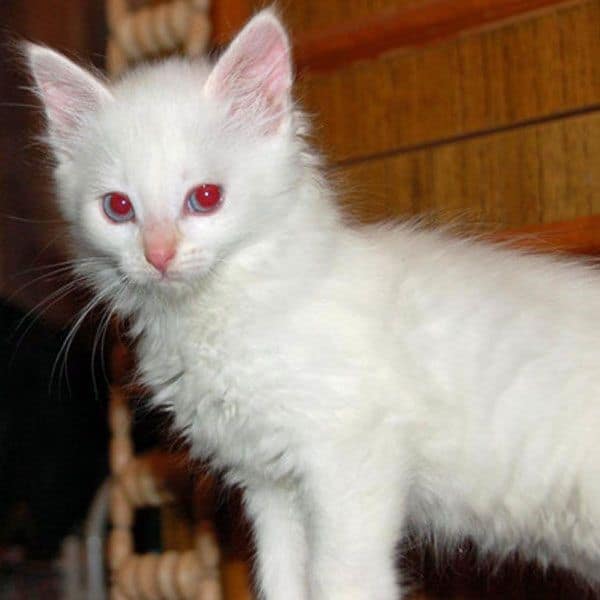 The rarest color of cat is Albino. In order to get an albino cat, you need parent cats with two recessive genes and the offspring have to receive both. Far more often, the kitten will get one or neither of them and become Colorpoint, White, or something in between. The recessive genes in true Albinos damage their TYR gene, which causes them to produce no melanin in their skin.

The result is a cat with pink skin that tinges their white fur pink. They have light blue or pink eyes. Unfortunately, these cats are prone to sicknesses of the eyes and skin, with many being photosensitive, immunodeficient, or prone to balance issues.

We didn’t list a price because Albino cats cannot be purposely bred – that’s how rare they are. There is no established price for them as they can occur in any breed yet rarely occur in any.

Albino cats do not technically have pink skin – their condition has removed all pigment from their skin completely. The reason it appears pink is that light reflects off the skin and reveals the blood beneath. Their eyes may appear pink for the same reason – blood vessels in the eyes reflecting the light in the absence of any pigments.

Cat colors can be confusing to rank since they can cross breeds, come in many patterns as well as colors, and appear in differing degrees of purity. Breeders often sell the rarest colors for thousands of dollars while some colors like Albino are so rare that they have no standard industry price.

Whether you’re looking for a unique housecat or the perfect breeding stock from the most reputable breeder, these rare cat colors provide clues to the storied history of cat breeds, as well as to their current status in a collector-driven industry.