Cats have some of the most mesmerizing eyes with sharp feline shapes and vertical pupils, unique for the species. The cat’s eyes can change color in different lighting, switching between darker to lighter shades with different-colored specks and sprinkles of yellow, blue, green, or black over the irises.

Cats communicate with their eyes, widely known for their poker faces when it comes to different emotions, easily recognizable through their eyes. The shape of their pupils helps them see more in detail, and the color of their eyes can determine their breed or level of melanin production.

Even with this, there aren’t many eye colors that can differentiate cats, as even the most unique colors exist in different breeds.

Whether their eyes are green, blue, gold, round, oval, or almond-shaped, our list encompasses the rarest cat eye colors. 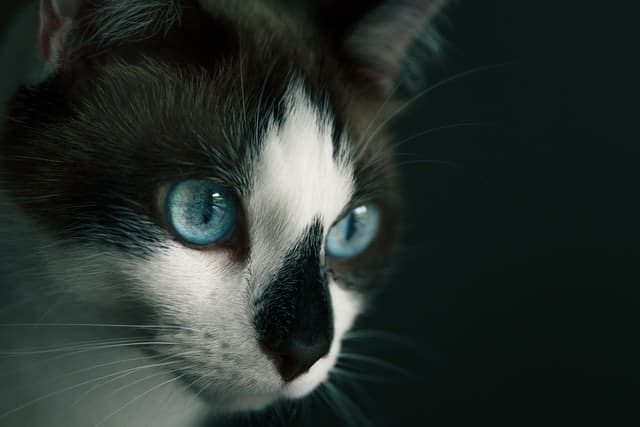 It may be surprising to see blue as the most common eye color among cats since it’s one of the rarest eye colors in humans. Cats with blue eyes don’t have any melanin in their irises, making their eyes clear and pure, like looking into deep water. The amount of melanin depends on genetics.

Blue-eyes kittens are born with sapphire blue eyes, which can get darker throughout their lives, ranging from sky blue to darker shades. Siamese, Persian, and Himalayan cat breeds usually have remarkable blue eyes, but some beige or fawn furred cats also have the same eye color.

Blue eyes are associated with blindness in cats, often enough for people to think all blue-eyed cats are deaf, blind, or both. But many experts explained how it depends on their fur color more. A combination of white fur and blue eyes might lead to deafness more often, but not necessarily. 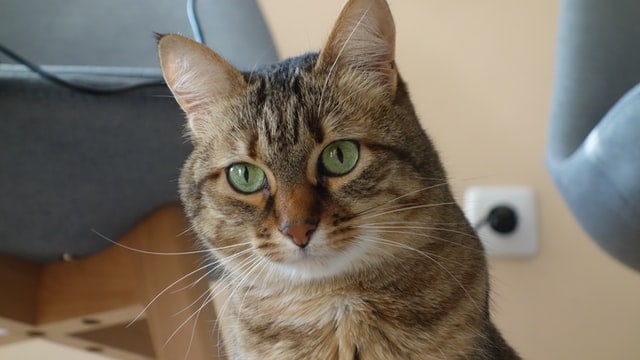 Green-eyed cats are common concerning eye color in cats, but entirely green eyes are uncommon, even for humans. The green of cats’ eyes can vary from green with yellow undertones to green mixed with blue, and even green sprayed with flecks of gold or yellow.

Among other cat breeds with similar shades of green eyes are Havana Brown, Abyssinian, and Norwegian Forest.

Green eyes are the color people identify cats with the most. Movies and books often describe cats as feline creatures with mesmerizing and piercing green eyes. – For example, The Wolfmen sign about the Cat Green Eyes. 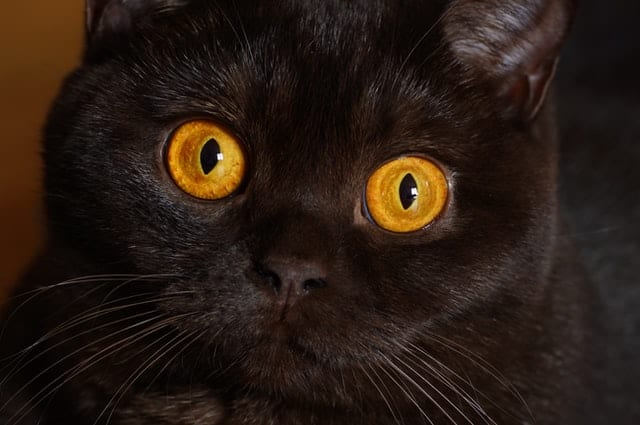 Amber or yellow eye color in cats is one of the most common colors on our list. It’s usually present in cats with black or darker fur. However, larger cats such as tigers and lions can also have a blend of orange and yellow eyes. This eye color develops due to lower melanin pigmentation.

Amber eye color is common in Burmese, Cornish Rex, and Scottish Fold. But many orange-colored tabby cats, such as Somali, Chausie, and Turkish Van, also have it. Yellow eyes can have various shades – from pale lemon to golden, blending into a rich amber color. 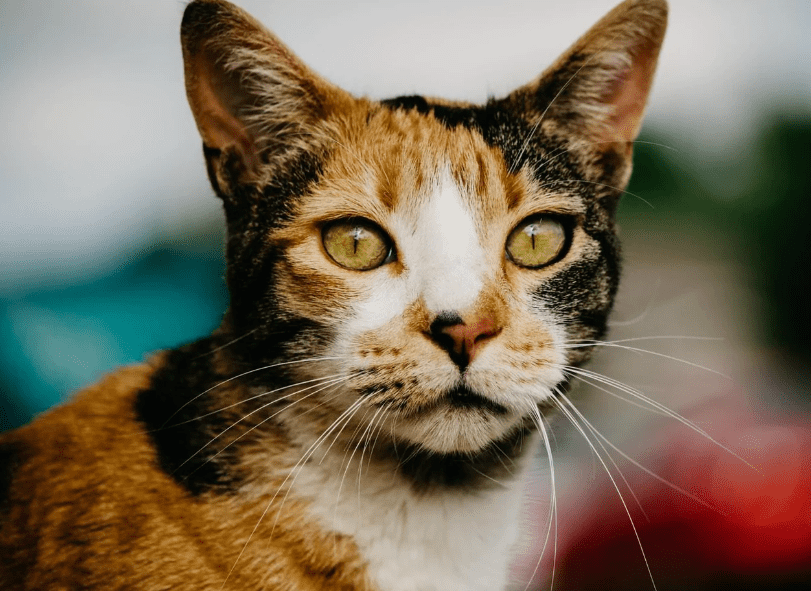 Hazel-colored eyes are a mix of the two previously mentioned colors. These are not as common as the previous colors, but one can see them in Bengal, Abyssinian, and feral cats like Bobcat (Lynx) – a wild cat native to North America. 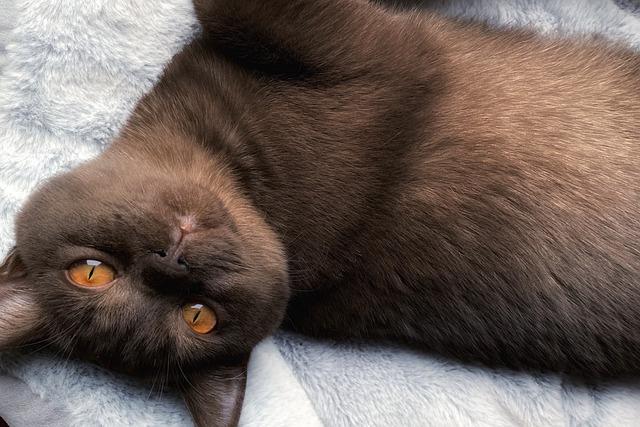 Brown eye color is similar to hazel eyes, but they have a much more intense dark or brown color. It’s not as uncommon as some of the following colors on the list, but it is undoubtedly rarer than amber and yellow shades. Brown eyes are a variation of hazel eyes, and no cat breeds have truly brown eyes.

Darker, brown eyes often occur in American and British Shorthair, Bombay, Sphynx, and Manx cats, but it depends on their melanin production and the activity of melanin-producing cells.

Brown-colored eyes in cats are never as brown as in humans. However, the more melanocytes their iris contains, the darker the eyes will be. 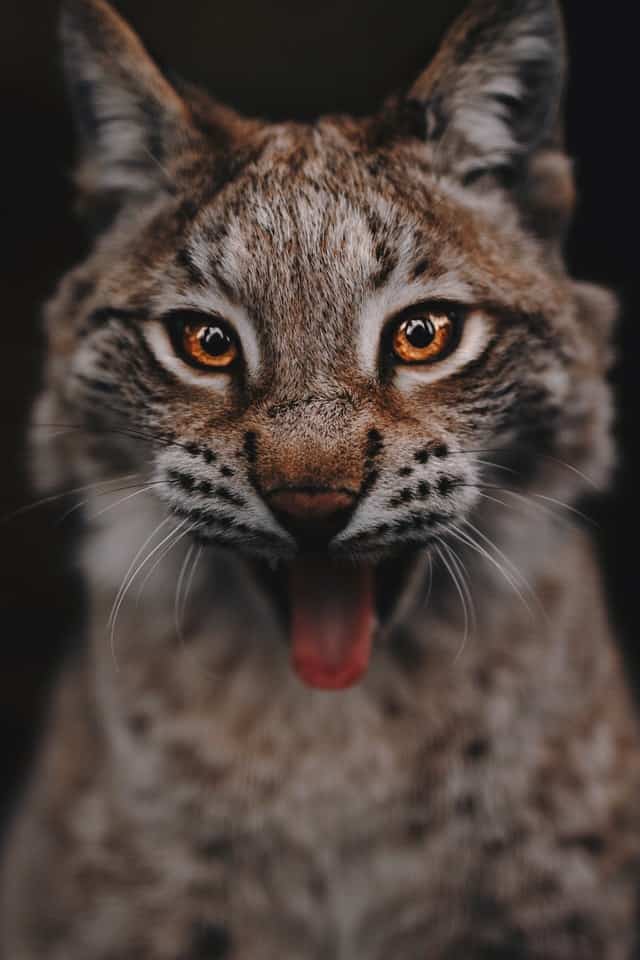 Orange-colored eyes are the darkest color you can see in cats. This color was developed by British cat breeders who wanted to create an eye color that is vivid against any fur color, easily distinguished from other eye colors. Orange eye color is suitable for darker/black cat breeds.

This eye color is one of the rarest, as it can be found in Devon Rex, Japanese Bobtail, Maine Coon, Turkish Van, and Chartreux cat breeds. Orange eye color is specific because of the intensity of the color, usually without any specks of yellow, green, or orange.

Orange eyes are typically more common in darker/black cats, but the kitten wouldn’t have orange eyes right away. Most kittens (of any breed) are born with lighter, blue eyes, and the color stays light for for the first few months. By the time they are six months old, their eye color changes to darker shades. 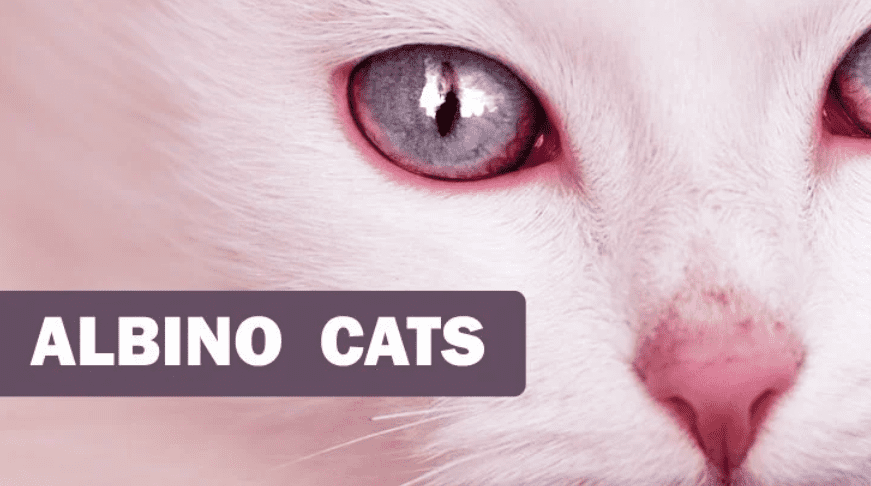 There was a rumor about magical cats that couldn’t be real because of their purple eyes. In reality, no cat breed can have purple eyes, but their eyes can appear purple or lilac due to a condition called albinism or lack of pigmentation.

Albino cats have no color in their coats, resulting in entirely white fur and light eye color, ranging from light pink to light blue. But not all white cats are albino, as albino cats have pink noses, mouths, and pads, without any darker spots on their body.

The rate of albinism in wildlife can be from 1 in 20,000 to 1 in 1 million. However, only around two percent of felines are albinos, making these cats very rare.

photo source: All About Cats

Odd-Colored eyes come from a genetic mutation called heterochromia iridum, a variation in coloration, usually in the eye color. However, it can be present in hair or skin color as well. Cats with this condition have two differently colored eyes, depending on their breed.

This condition can be hereditary or congenital, developed after injury, or as a side effect of a medication. Cats with this condition have one blue eye, and the other can be a variation of yellow, green, copper, or orange color. Persian and Munchkin cats are prone to having nonidentical eyes. 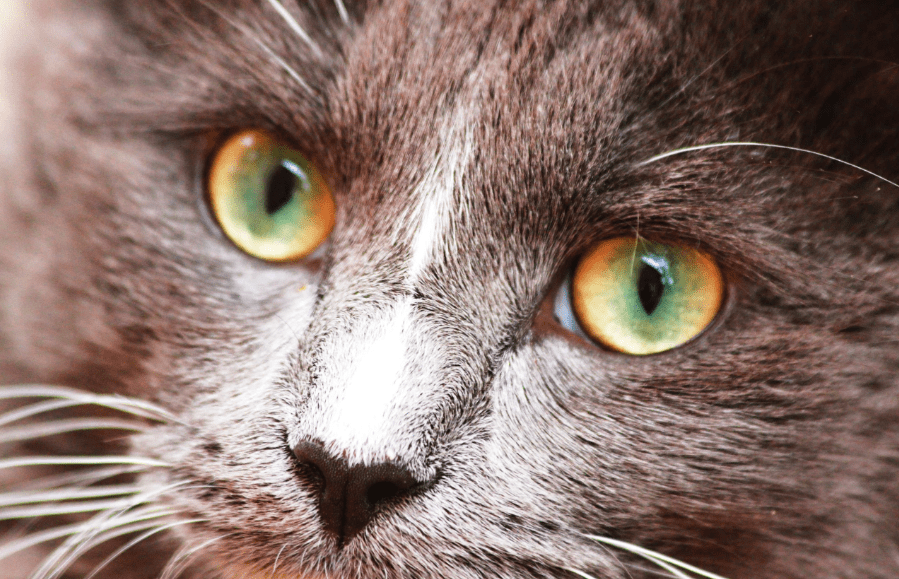 Dichroic-colored eyes are the rarest cat eye color, containing two different colors in a single eye. Dichroic condition is similar to heterochromia and typically occurs in white breed cats. But the

the main difference is in the color placement and intensity of the colors.

Cats with dichroic or dichromatic eyes have a bright green or yellow ring around the pupil of the eye or a different color in one-half or a quarter of the eye. This condition is caused by different melanin levels in the cat’s iris. The mutation can happen in all cat breeds.

One or both eyes can be dichroic, and sometimes each eye mirrors the other. Even though this is a rare condition, it’s unlikely it affects the livelihood.