Since its creation in 2004 by Blizzard, World of Warcraft or Wow has amassed arguably gaming’s most devoted fanbase. The fictional land of Azeroth houses this MMORPG (massively multiplayer role-playing game), including its 343 mounts. It would be more accurate to say that Azeroth invented and defines to this day what a MMORG even is.

After creating a custom avatar, the player roams this world fighting monsters, defeating bosses, conquering quests, interacting with players and NPCs, and of course, collecting items. Some items in the game call special mounts to the player, ridable creatures that can only be obtained through special means. Some are even one-of-a-kind prizes.

Here are the 8 rarest mounts in Wow. 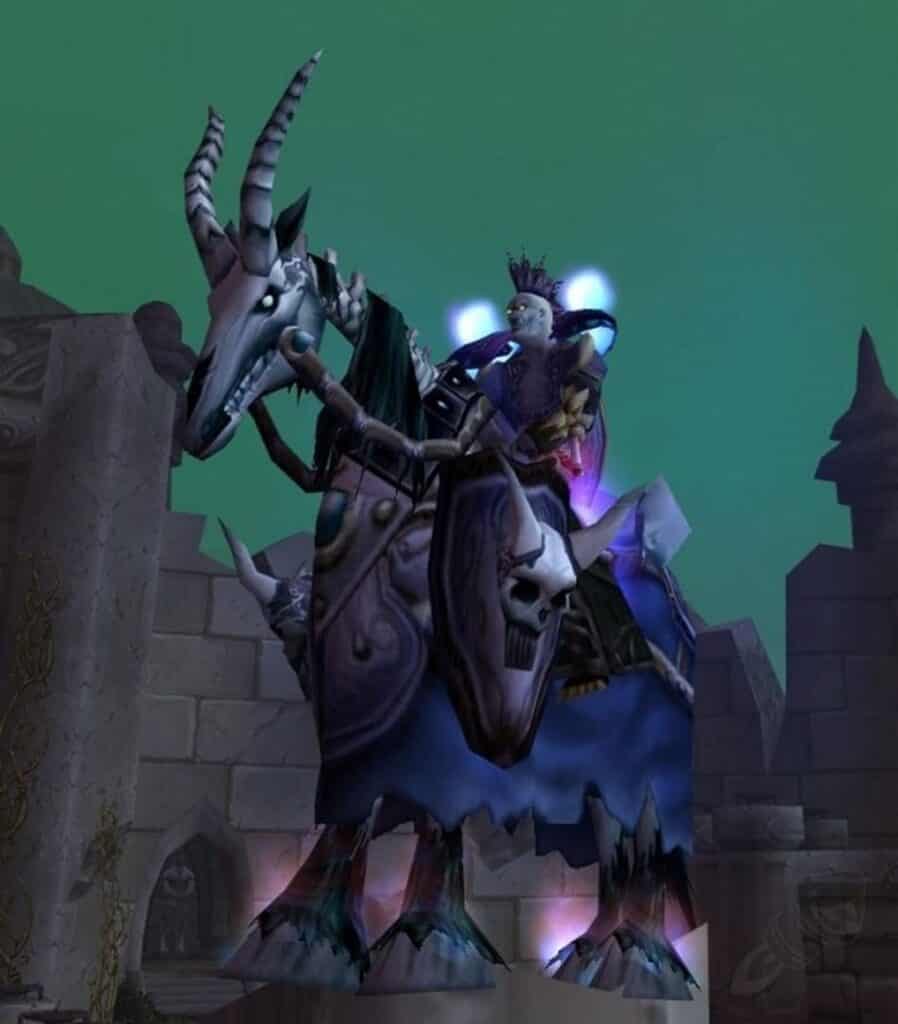 Baron Rivendare was once the ruler of Stratholme and now leads a different kind of kingdom, as the replacement for Highlord Mograine atop the dead version of his beloved deathcharger, first among the Four Horsemen of Naxxaramas.

In addition to dropping Deathcharger’s Reins and calling this coveted mount, Rivendare also drops the Dungeon Set 1 legs. He can also be fought in the Dungeon Set 2 quests and the 10 and 25-man quests of Naxxramas. 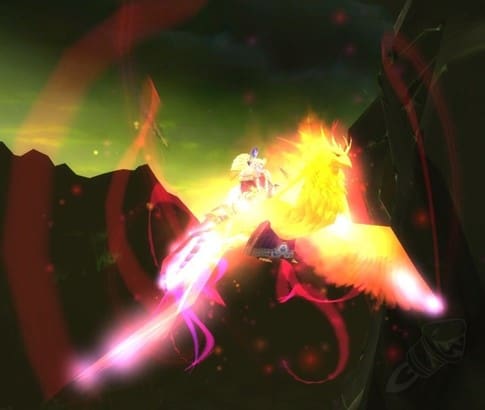 In Outland, you can summon a rideable Phoenix if you possess the Ashes of Al’ar. This item can only be used at level 70 and binds when you pick it up, summoning your glorious mount.

This flying mount is the ride of the legendary Kael-thas Sunstrider, also known as The Sun King. His loyal pet can only be summoned and ridden by the player after obtaining his item, which has a drop rate of around 1% after defeating him at the end of The Eye.

Kael-thas is a master of enchantment, able to manipulate magical weapons and even gravity. His beloved pet, the phoenix Al’ar, is a symbol of his ability to cheat death. According to lore, he boasts to death itself that nothing can separate him from his treasured mount.

In the zone of Nazjatar, players can encounter a rare beast, level 51, called the Soundless. This monster has an estimated 0.58% chance to drop this sought-after mount, the Silent Glider. Finding a Soundless is hard enough – they only spawn in the Southeast corner of Nazjatar, hidden on towers of coral in the Coral Forest. That’s just finding them – then you have to actually get the drop.

Players from level 1 to 60 can ride the Silent Glider, but only those with an Expert Flying rank can take off with their new prize.

According to Wow lore, Silent Gliders survive in the depths of the sea, filled with natural gasses that allow them to withstand intense pressures. The same gasses give them the ability to calmly float in the air, giving their riders a truly silent scenic view of the land. 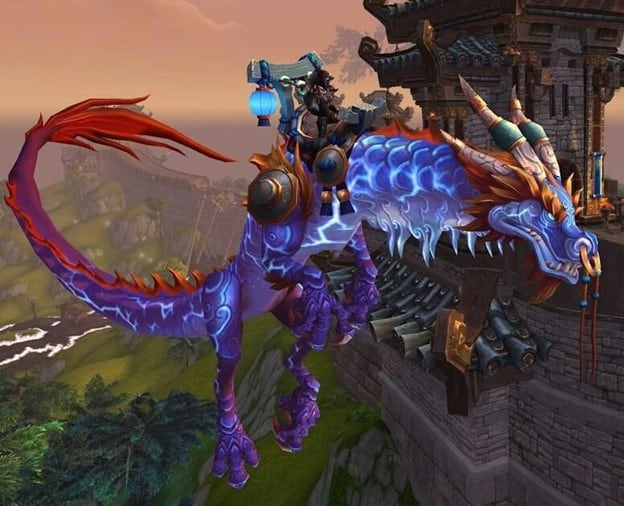 On the Isle of Thunder, an elite beast of an unknown level named Nalak (also known as The Storm Lord), occasionally drops a rare mount called the Thundering Cobalt Cloud Serpent. The item only has a 0.03% drop rate, making it one of the rarest mounts in the game. The reason this mount isn’t higher on the list is that it can also be obtained each week through a bonus roll, one of only four bosses that share this chance.

Players who complete The Storm Gathers quest can get to the Isle of Thunder and hunt for this rare mount. Nalak is a world boss, meaning you can only confront and kill it once per week.

We mentioned that bonus rolls can give you a chance to win this mount. To win the Thundering Cobalt Cloud Serpent, you have to roll the Mogu Rune of Fate.

The Solar Spirehawk is available to any class with Apprentice Riding status. However, defeating Rukhmar and calling the mount is an incredibly rare occurrence that happens to only a few players.

In the Spires of Arak lives Rukhmar, an avian world boss known to be the only enemy that drops the Spirehawk. It is estimated that its drop rate is around 0.03%, making it one of the rarest mounts in the game.

Unlike some of the mounts listed below, Solar Spirehawk can be obtained a second way. It can sometimes appear (albeit very rarely) in the Black Market Auction House at Hook Point in Boralus. The mounts that command the highest prices here are formerly retired or else rare, which is why they are so coveted.

Note that Wow itself puts them up for auction, not other players – the items are generated randomly, so the odds of snagging a Spirehawk in this way are almost zero. But it is possible. 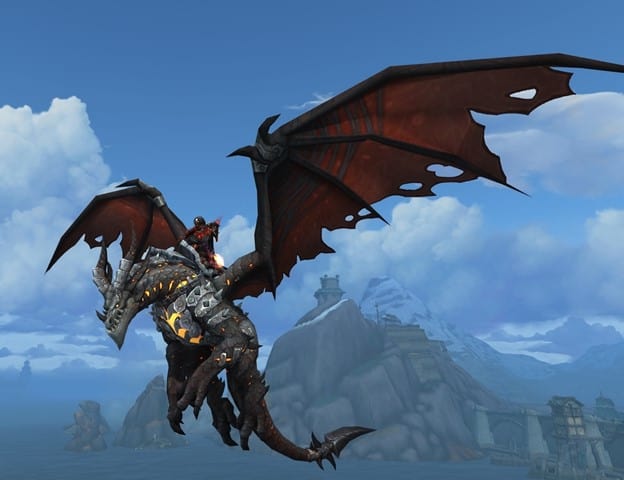 The Obsidian Worldbreaker, a fiercely armored, quadrupedal dragon, is well-known by sight as one of the game’s most coveted mounts. Apprentice Riding status is required just to ride it on the ground. To take off, only Expert Riders need apply.

Originally, the Obsidian Worldbreaker was a reward earned by conquering three events called “Chromie’s Memories.” These events combined nine raid bosses from the history of Wow to celebrate the game’s 15th anniversary.

However, after that, this mount was discontinued, meaning that it can now only be acquired through the randomly generated items that appear for auction at The Black Market Auction House, making this mount one of the rarest and most expensive in Azeroth.

In Wow lore, no worldbreaker is more famous than Neltharion, the Earth-Warder, the self-proclaimed bane of life and master of destruction. Riding such a beast makes you the envy of all. 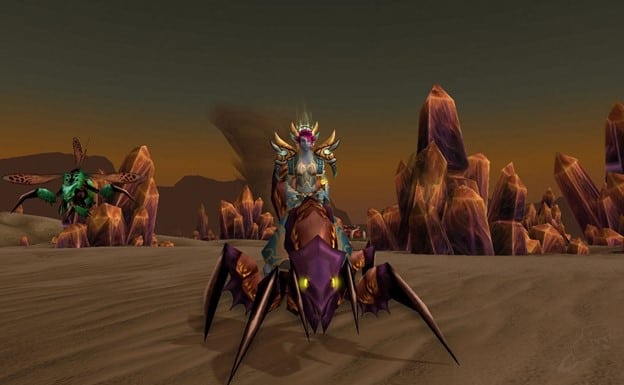 The Black Qiraji Battle Tank mount is summonable by a level ten item called the Black Qiraji Resonating Crystal. It calls and dismisses a rideable Black Qiraji. It could appear in green, blue, and most rarely in red, making the Red Qiraji another step above even the default in terms of exclusive finds in the Temple of Ahn’Qiraj.

In this area, with its defaced temples and crumbling cities, the Black Qiraji Battle Tank comes in handy. It can only be obtained after rebuilding the scepter in Southern Silithus and opening the old battleground. Once obtained, you will no doubt be the envy of every rider on the server.

The Black Qiraji Resonating Crystal can only be obtained during the exclusive event called, Scepter of the Shifting Sands. Once it’s over and the Gates of Ahn’iraj open, you can never ride your own Black Qiraji again. In fact, this mount is so rare that 0% of players have one now. 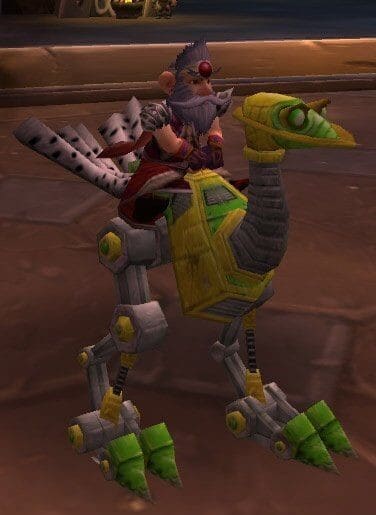 The rarest mount in Wow is the Fluorescent Green Mechanostrider. Mechanostrider mounts are already rare. They were dwarf and gnome-only mounts at first, though they were later patched to include all races in the 3.0.8 update. They’re coveted because they increase your speed by 60%, 100%, or more based on the quality of the mount. They’re often used in tournaments and PvP challenges.

You may be wondering where this magnificent metal bird is now. Unfortunately, Narshe tried to sell their account during patch 6.2. As punishment, the Game Master permanently removed the coveted Fluorescent Green Mechanostrider from their collection, never to be seen again.

The world of Azeroth is massive, featuring nearly 350 mounts of various rarity that players compete for, hunt for, and ride. The rarest mounts can only be obtained via ultra-rare drops or even through one-of-a-kind mistakes on the part of Blizzard. Due to how they are earned, these rare Wow mounts will make you the envy of the entire Wow community. 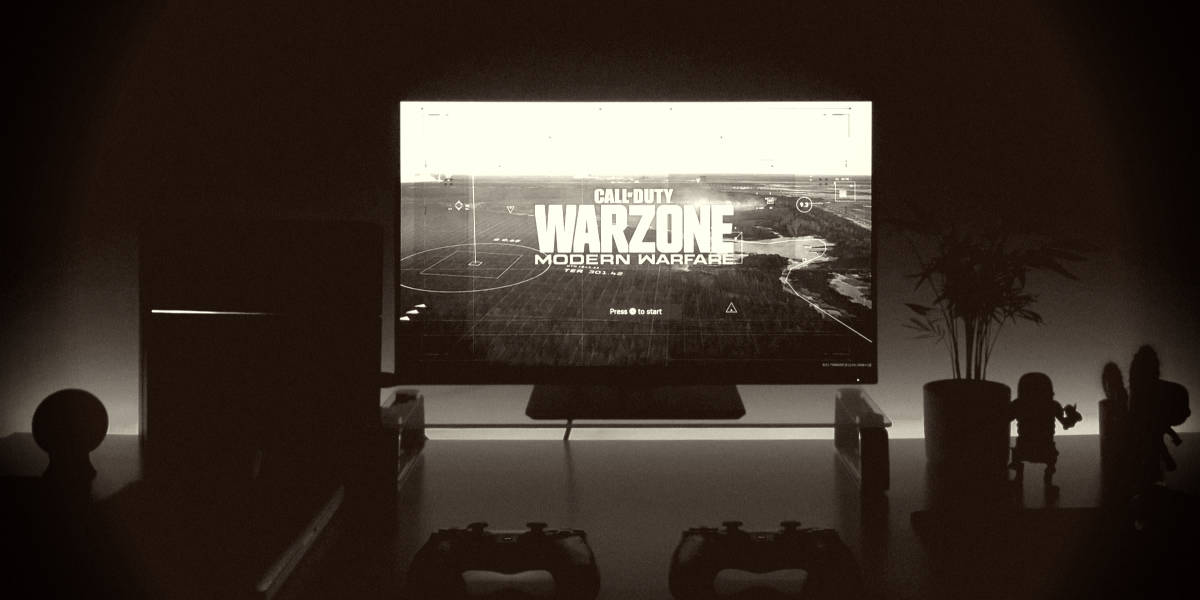 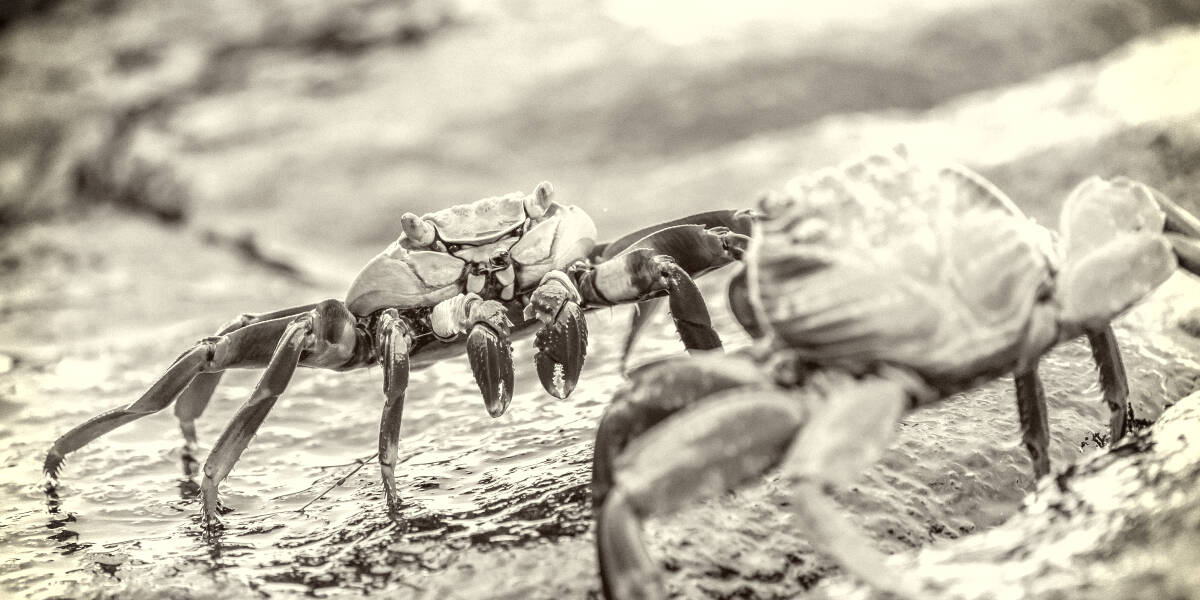 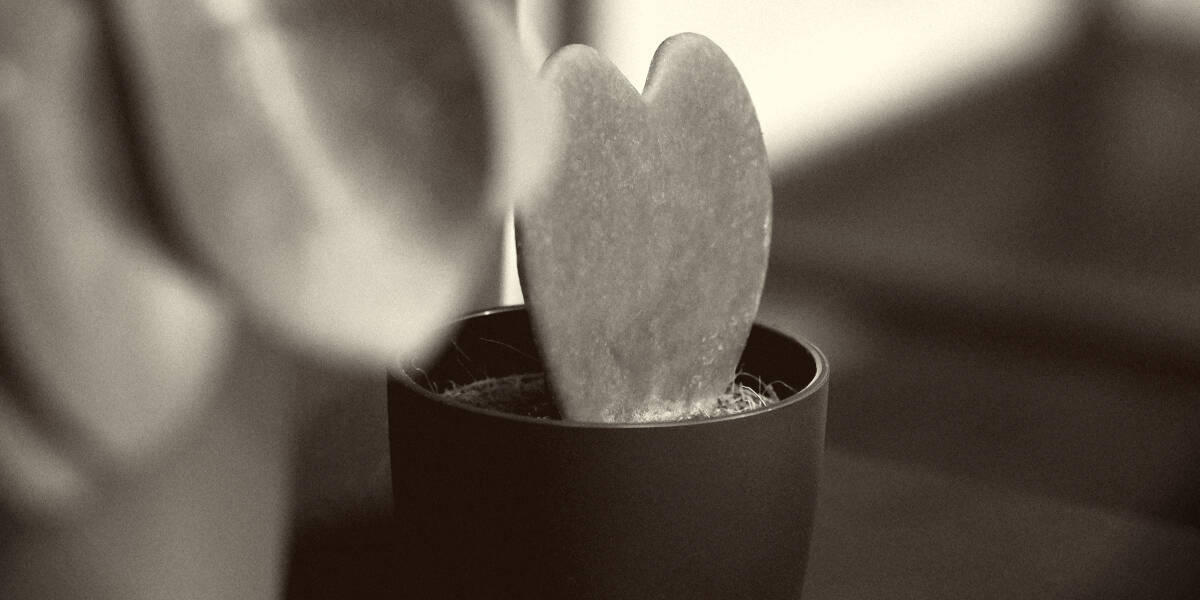