Jurassic Park is ingrained into our childhoods. Three notes from the score can send us soaring back to Isla Nublar and all the crunchy dinosaur action that never fails to brings a smile to our faces, no matter how many times we watch it.

With the popularity of the film came a surge of toys based on the favorite dinos, many of which were over-produced and became worthless to collectors. However, certain Jurassic Park toys can now fetch hundreds or even thousands of dollars depending on their condition. These are the 8 rarest Jurassic Park toys. 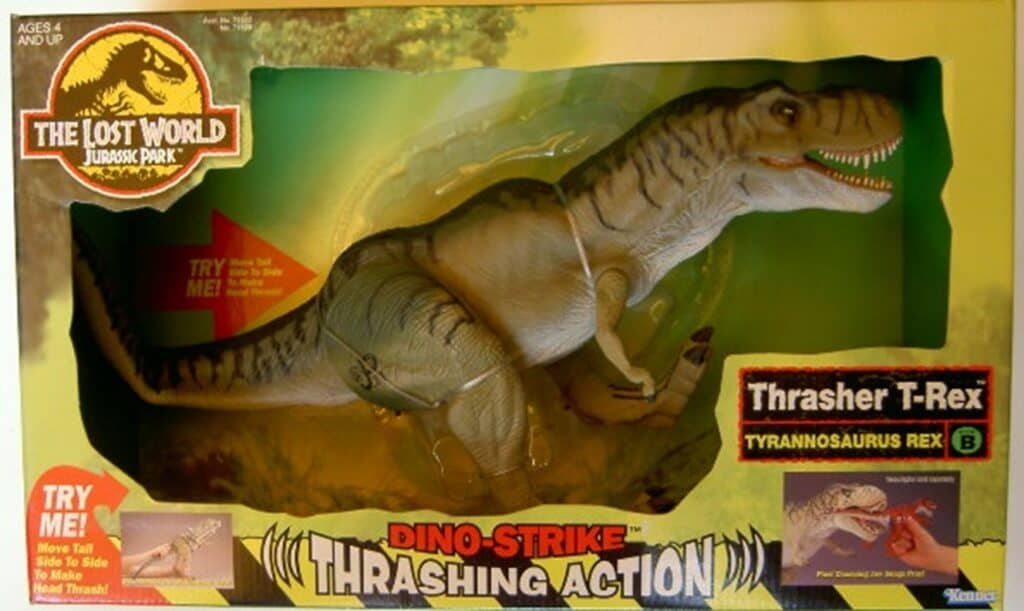 In the series 1 Lost World toys, Kenner released this Thrasher T-Rex, which has been a sought-after collector’s toy since 1997. It’s made of soft rubber like the Bull Rex, with hard plastic articulated arms and legs. By pushing the tail to the side, you could make the T-Rex “thrash,” which is an attack that moves its head and jaws (in the film, it uses this move to kill Gennaro).

NIB Thrasher T-Rexes go for around $300 on eBay today.

The proportions of the Thrasher T-Rex are unique in that they mirror realistic T-Rexes more closely than most toys. Dinosaur fanatics often complain about the shape of the head and coloring, but this toy has a realistic profile as well as a muted palette that mirrors the film. 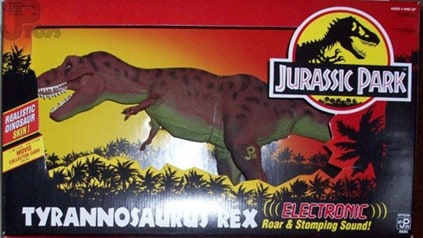 In the first series of Jurassic Park toys released directly after the film, this electronic T-Rex was the hottest of the bunch. This striking red T-Rex toy was made of realistic-looking rubber to give the skin textures, with the arms, legs, and jaw made of hard plastic.

Most uniquely, this T-Rex toy powered up with batteries for a ton of extra features. These include player-activated roaring and jaw movements, stomping sounds, and arm movements. Many sites list this as a $1,000+ toy, however, NIB models sell on eBay for around $500.

This toy was sculpted from a maquette used in the actual film, making it probably the most film-accurate toy ever released. The coloring, however, is bright orange, which contrasts with the dark brown used in the film. However, this is more accurate to the original book, which used theories of dinosaur coloring to make its story more realistic. Spielberg apparently thought about that but said, nah. Not as cool. 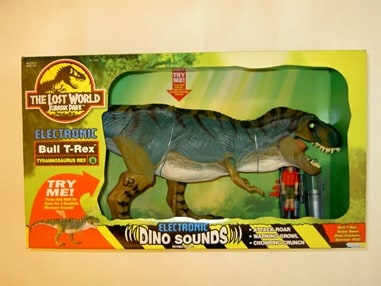 The Lost World Bull T-Rex is a huge action figure from 1997 by Kenner. The toy had a button on its back that activated a roar and crunching sound. It also featured a malleable latex mouth (as opposed to hard plastic) that made fighting with it more interactive. Its little arms were articulated as well.

This toy rarely comes in the box. When it does, it can fetch $600 or more. Outside of the box, with just the dino, depending on the condition, it can still be worth $100.

This toy came with an action figure of a man inside a metal container. The dinosaur’s body was hollow, with the idea that you could actually make it eat the capsule and pull it out later from a flap on its stomach. Not only this figure but any other toys small enough to be devoured of course ended up in the stomachs of the Kenner Bull Rexes. 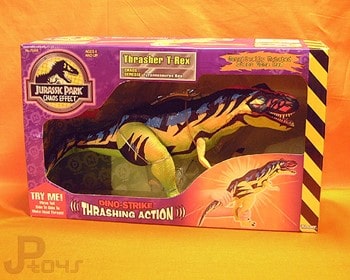 The Kenner Jurassic Park toys are going to take this list by storm since the company’s line of colorful, creative dino toys seems to have been in limited supply. Take this Chaos Effect Thrasher T-Rex, for example. The immediately striking thing about this toy is of course the coloring, with shocking yellows, reds, and blues that contrast the muted camouflage of the dinosaurs in the film.

This toy had a “thrashing” mechanism where you could push the tail structure to the side to make the head attack other toys (or siblings). A mint-in-box version of the Thrasher T-Rex is worth about $700, though some have sold on eBay for over $1,000.

At the time this toy was made, the bright colors of the Chaos Effect toys were intended to be fantasy in keeping with the “genetic modifications” present in the films. However, since then, paleontologists have uncovered evidence to suggest that dinosaurs probably WERE very brightly colored. The Chaos Effect T-Rex may be more accurate than the film! 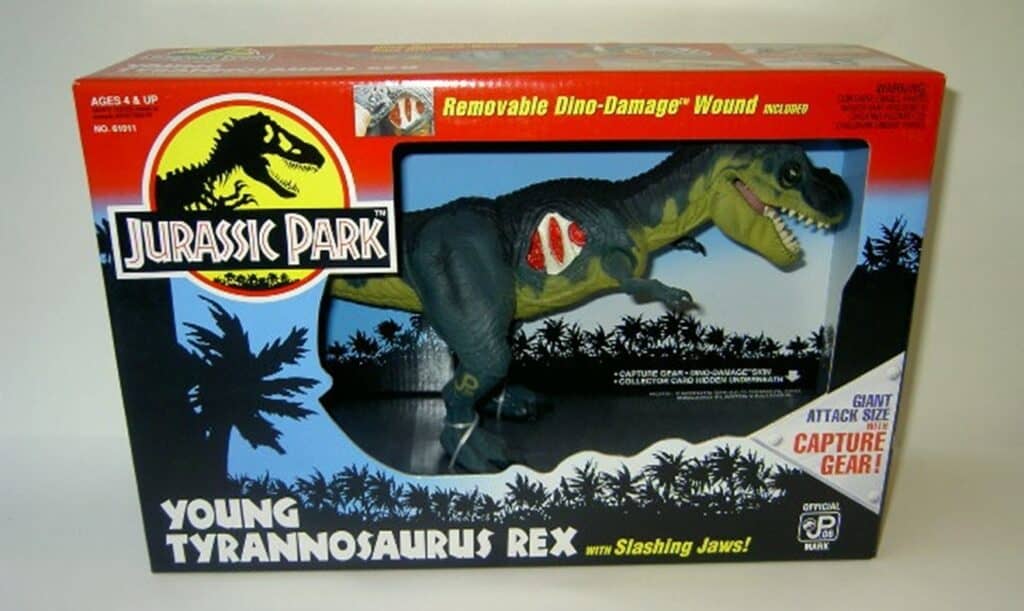 The Young Tyrannosaurus Rex is actually not the one featured in the second film, as this toy was among the second series of toys following the first film’s release in 1993. This figure has a rubber outside that gives the skin a realistic texture while its arms and lower legs are hard plastic. Like some other toys, it has removable “dino-damage” that simulates a battle.

The paint job sets this one apart, as the toy is painted dark and light green, contrary to the browns of most of the toys. The toy also comes with capture gear to play with, as well as a slashing jaw mechanism. If you can find one in the box, this toy still retails at auction for upwards of $800.

There was no young T-Rex in the original film, but there was one in the original novel, which is what this is based on. It’s actually a repainted version of the Young T-Rex toy in series 1, but it adds the capture gear in addition to the grittier color palette. 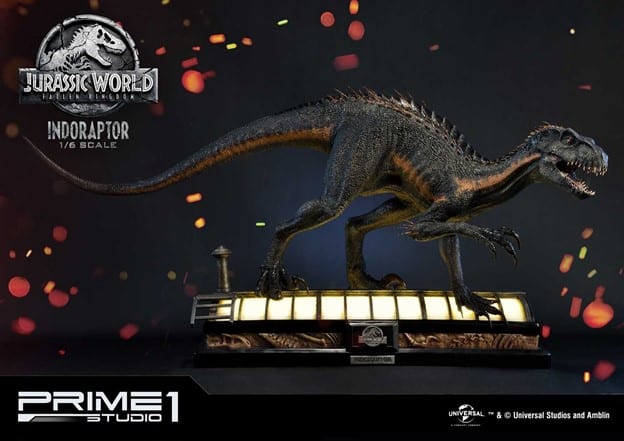 This is the Indoraptor statue by Prime 1 Studio. Its manufacturer limited production to 300 units, making this collector’s figure a 19-inch masterpiece for any avid JP fan’s shelf. While not a “toy,” exactly, and more of a statue or collectible, the 1:6 scale polystone display piece fits the bill in our opinion. It’s a toy for adults.

Jurassic World: Fallen Kingdom may have been massively disappointing, but this beautifully detailed Indoraptor sculpt could be the best thing to come from it.

This statue comes with an LED light-up base as well as an exclusive bonus in some editions: a sculpt of the DNA tube in the film that contained the Indoraptor’s rib. 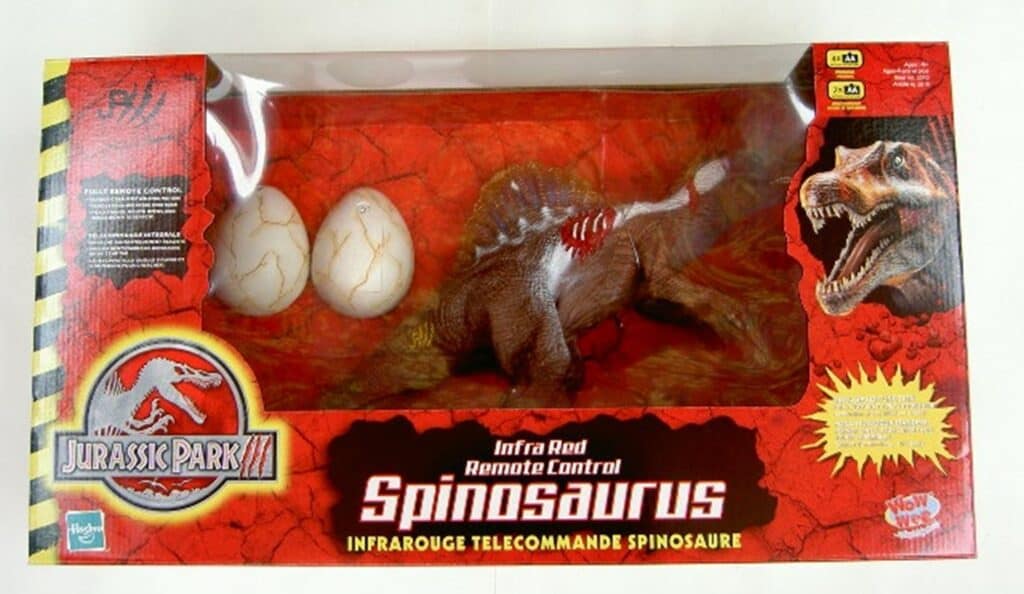 Jurassic Park III is no one’s favorite JP movie, if we’re being honest. But everyone LOVES the Spinosaurus, which is why this remote-controlled toy by Wow-Wee (a division of Hasbro) was so popular at the time. However, its popularity meant a lot of toys were sold and a lot of them were opened.

This RC Spino is most often sold as-is with just the dinosaur, no egg remote. In fact, it’s so rare that it’s hard to find an example of a NIB listing, but the eBay evidence we could find suggests that new versions of this one go for $900 and up.

Scientists recently discovered an intact Spinosaurus tail for the first time ever. This included a series of bony spines that indicate the presence of a fin the stretched the entire length of the tail. In other words, not only was Spinosaurus huge and awesome, but it was also a water monster. We need a new version of this toy that includes aquatic action. 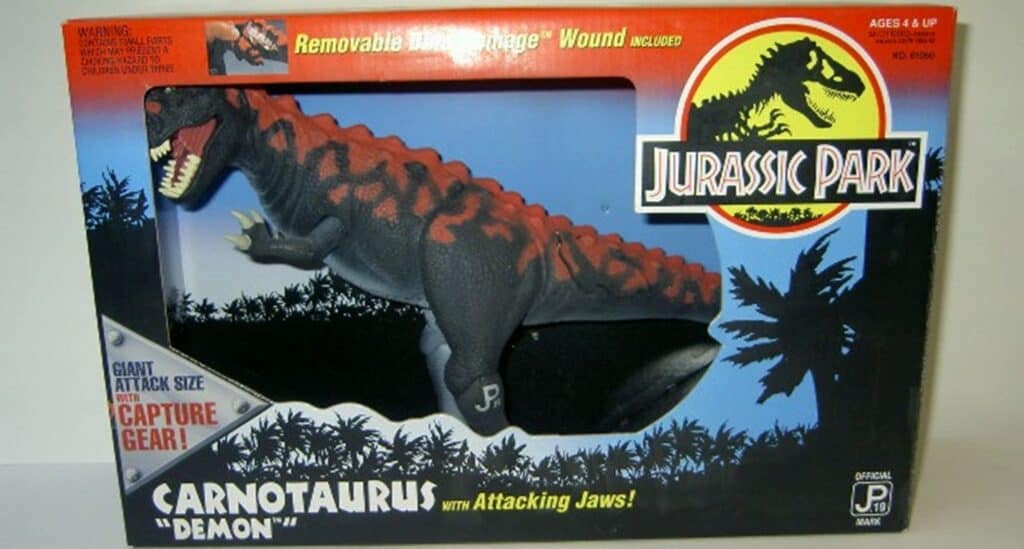 The rarest Jurassic Park toy is the series 2 Carnotaurus Demon. This figure was part of the second wave of toys, a year or so after the movie became a smash hit. People call it the “Demon” because of its appearance, which includes bright red coloring and devil horns.

The original toy came packaged with “capture gear,” which included a face mask and chains to simulate catching the dinosaur in the wild. It also had a jaw mechanism that could bite and removable “dino-damage,” which meant that you could take a chunk out of its tail if it took a hit from another action figure in an epic bedroom floor brawl.

The Carnotaurus was actually not in any of the Jurassic Park films, though many kids may remember it as the villain in Disney’s Dinosaur. This iconic dino did make an appearance in The Lost World, the sequel novel to Jurassic Park, released in 1995. However, it didn’t get a proper on-screen appearance in its series until Jurassic World: Fallen Kingdom. Since the toy predates all of these, you could say that the Demon figure is how Carnotaurs came to Jurassic Park.

Jurassic Park is a load of fun and crushed the toy sales after every new film. However, some of the more complex and desirable toys had a limited run or disappeared quickly, leading to them becoming rare collector’s items. If you can grab these rare JP toys new-in-box, you could have a thousand-dollar toy on your hands and not even know it. Or just a really cool plaything.