The Nintendo GameCube, the company’s 4th major console, represented an attempt to redeem the gaming giant after the step backward of the N64. While many fans enjoyed the N64, it undersold compared to its competition, the almighty PlayStation 1, and Nintendo lost most of its long-time 3rd party support to the fancier, disc-based system.

The GameCube was Nintendo’s gamer-focused, disc-based leap forward. The little indigo lunchbox packed a deceptive amount of power and a controller that many gamers still consider to be the best ever made. Its games may have undersold compared to the PlayStation 2, but this has only increased the prices of its most exclusive titles. Here are the 8 rarest Nintendo GameCube games. 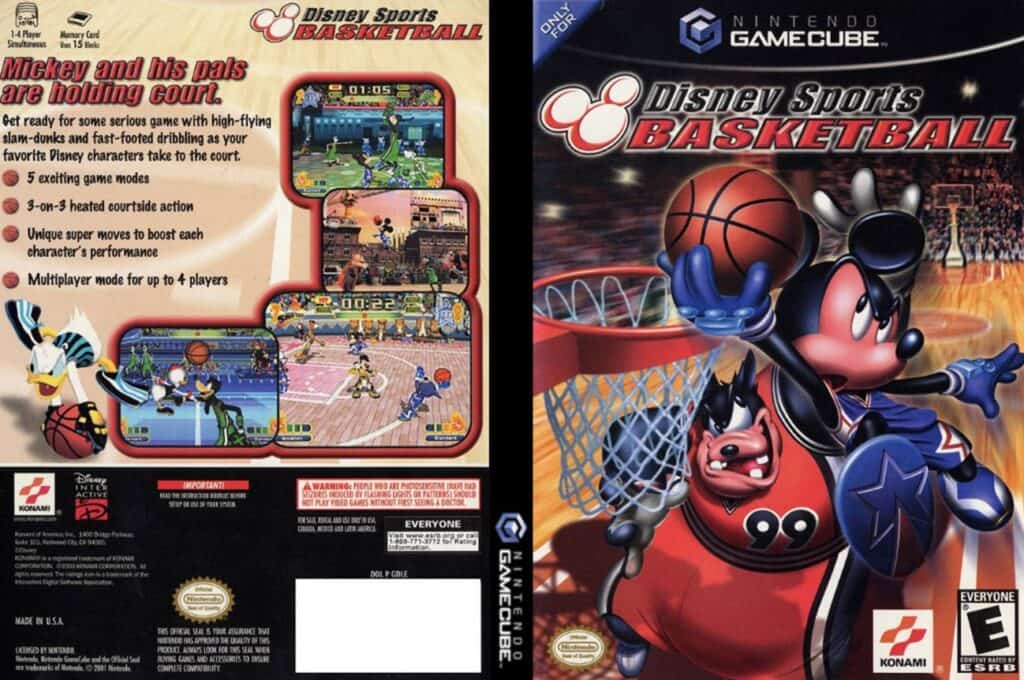 Disney Sports Basketball is a 2002 sports game using Disney characters, released on the GBA in 2002, first in North America. It later came out on the GameCube and was reviewed terribly. It seems that no matter who you played as – from the Superstars (Mickey) and Belles (Daisy Duck) to the Imperials (Pete) – shoddy controls and repetitive gameplay marred what should have been a decently fun sports game.

For collectors, the bad reviews equated to bad sales, which now equates to rarity. A new copy of Disney Sports Basketball costs as much as $586. It also has one of the highest prices for complete used copies, with auctions averaging at $254.37.

Polygon Magic, the developer who made Disney Sports Basketball in conjunction with Konami, is a well-known Japanese game company that has developed for a ton of systems since its creation in 1996. These include not only GameCube, Nintendo DS, PlayStation 2, and Wii games, but also games for GREE and Mobage, which are Japanese social networking sites. Polygon Magic has even made pachinko games, which are Japanese gambling machines. 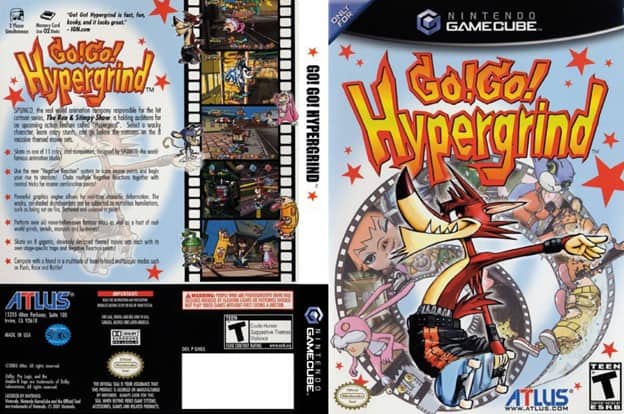 Exclusive for the GameCube in North America, Go! Go! Hypergrind is now a collectible game that can fetch over $630 in online auctions.

Spumco designed a lot of the art and characters for Go! Go! Hypergrind. You may know them as the studio behind Ren & Stimpy. 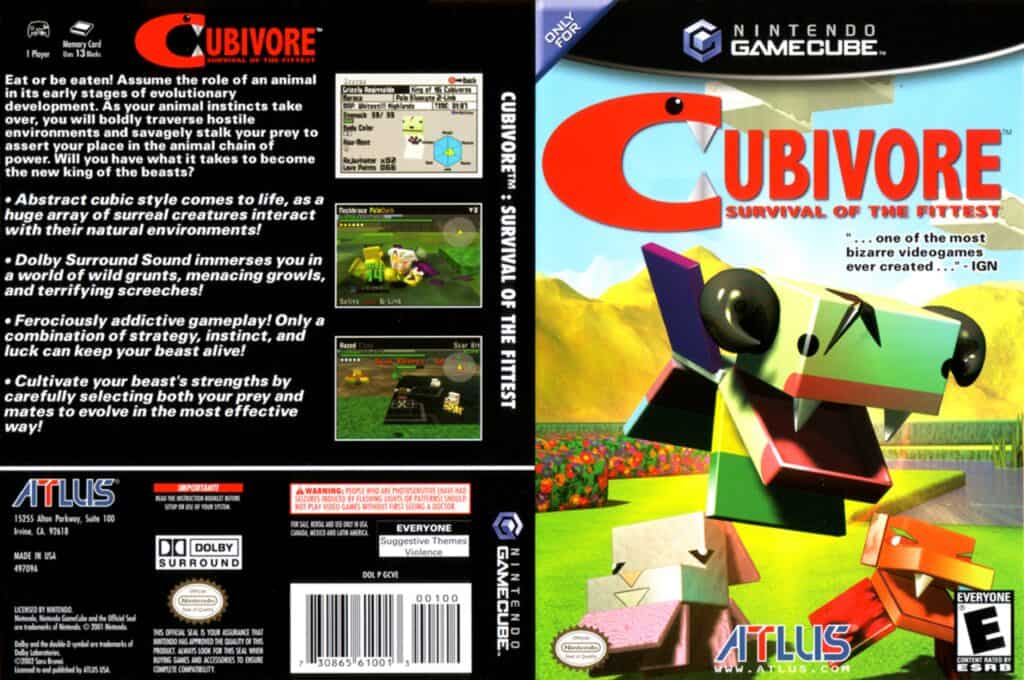 Cubivore: Survival of the Fittest has a bizarre history. The game was originally being developed as an N64 title but migrated to the GameCube. The core gameplay loop involves eating other cube-like beings to grow and mutate.

The game was only available in Japan in North America, published by Atlus, which is known for working with niche games that eventually become collectibles. New copies of this game exceed $700 in value.

Cubivore also has the distinction of being one of the most valuable games on the GameCube in terms of disc-only auctions. Even with no box, the price history of Cubivore averages at a value of $206.23. Complete used copies also break records in that category, with auctions averaging at $525.37, according to Game Value Now. 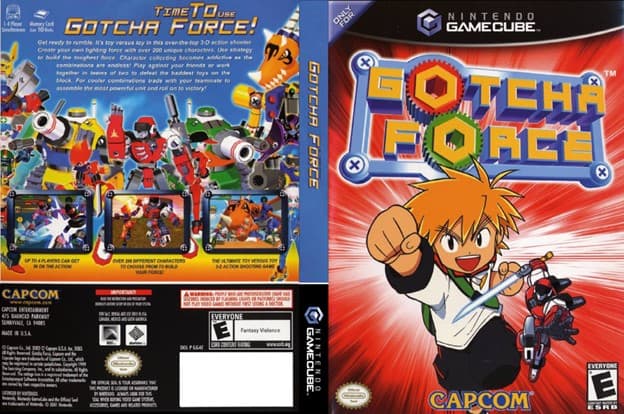 Gotcha Force is a 2003 fighting game/third-person shooter hybrid developed by Capcom. It has many of the elements that are a recipe for a valuable collector’s game, without being a promotional or collection disc. Firstly, Gotcha Force was developed by Japanese company Capcom, whose games often become valuable in the states. Secondly, it’s a GameCube exclusive and a fighting game, which are often niche properties. And thirdly, Gotcha Force was poorly reviewed but developed a cult following over time.

This means that it sold poorly at the time but has only increased in value since then. Today, original, new copies of the game can go for over $1,000 at auction.

We said “original” just now for a specific reason. The cult following behind Gotcha Force has become so strong that in 2012, Capcom reprinted the game so more people could buy it. This has led some to believe that a sequel could be in the works, though no further information has surfaced. 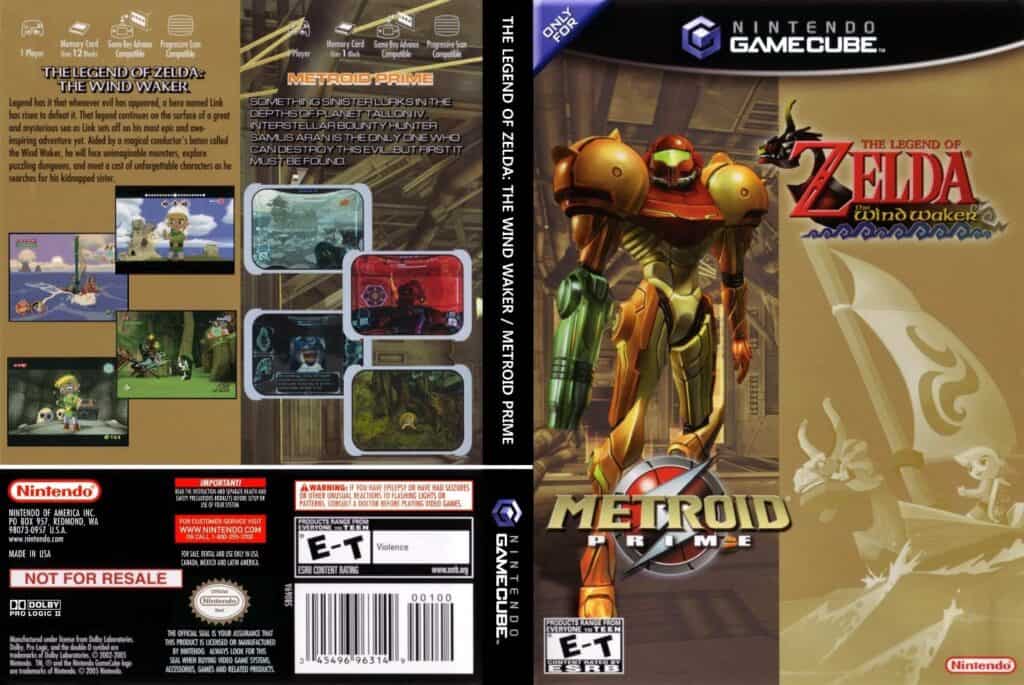 This double game pack released in 2005 had no extra bells and whistles. It was simply a way to buy two of the most acclaimed games on the GameCube in one go – Retro Studios’ hit Metroid Prime and Nintendo’s own The Legend of Zelda: The Wind Waker.

It came with both discs in one box, bundled with a GameCube. It was marketed as the essential GameCube starter pack. Today, the game retails for over $1,200 new.

This combo pack was only released in North America during the Christmas season of 2005. This obviously drives the low supply and insane price of the discs today. 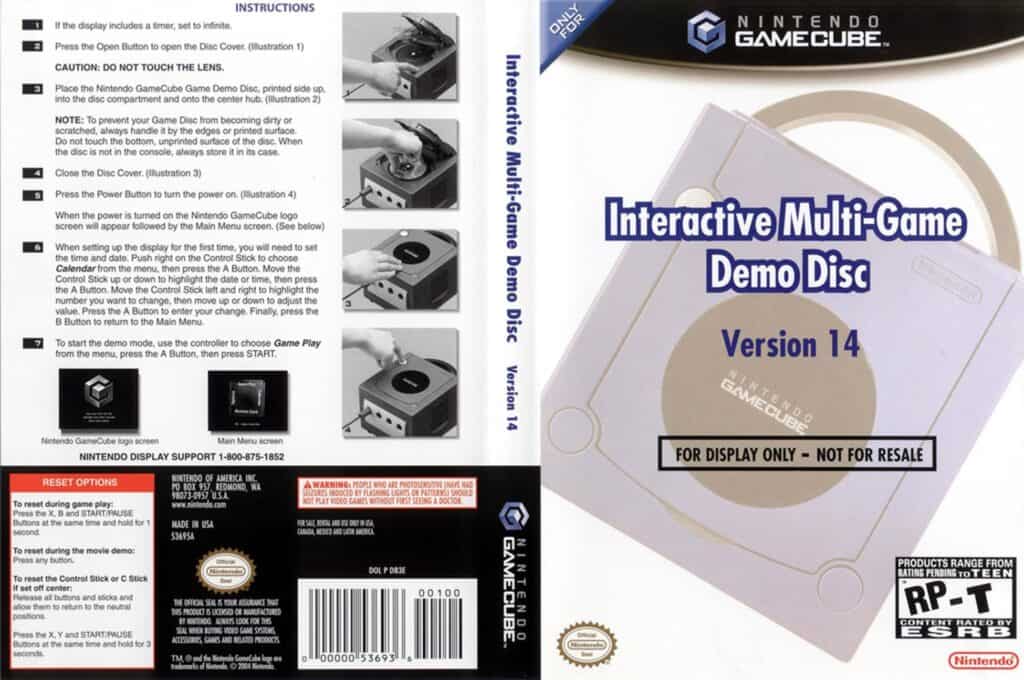 Like many of Nintendo’s limited-release discs, this demo disc is a coveted title for collectors, ironic considering that they were never retailed. Demo Disc 14 is identical to v15 except for the fact that it lacks the M-rated game previews. The demos on this disc included Custom Robo, Sonic Heroes, and Mario: Kart: Double Dash!! It also included pre-release trailers for Pokémon Colosseum, Mega Man Anniversary Collection, Metroid Zero Mission, and more.

The game is rarely available for sale, averaging 1 listing per year on Price Charting. The disc alone sells for an average of $435.25. A new copy averages even more: $1,411.82.

The reason this demo disc outprices its contemporaries is the exclusive Pokémon available via a patch for Pokémon Sapphire and Ruby. You had to connect a GBA to the GameCube Demo Disc with the Link Cable, but it was worth it. 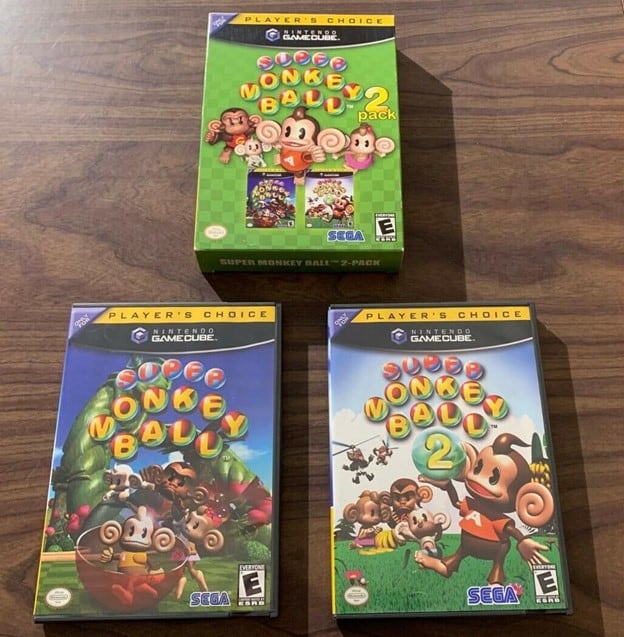 Super Monkey Ball was already an acclaimed 3D puzzle/platformer/racing game on the GameCube. This 2004 compilation disc combined the two games into one pack, which as we’ve already seen on this list, quickly became a recipe for increasing value.

The Super Monkey Ball 2-Pack was never released in Europe or Japan. As a North America-exclusive, its production was that much more limited, and the result has become that much rarer. 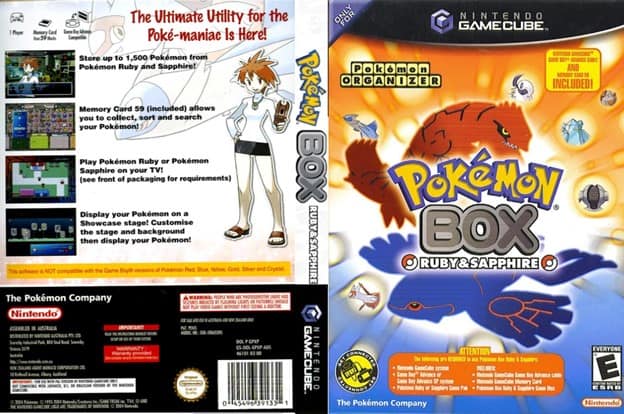 The rarest GameCube game is Pokémon Box: Ruby and Sapphire. This disc was not technically a game, but a utility for Pokémon master trainers to use as a supplement to their Pokémon journeys. This was an independent PC like the ones in the Pokémon games but one that could be stored on the GameCube memory card without fear of file corruption (Pokémon games only allow one save file).

Pokémon Box has room for 1,500 Pokémon that can be stored, organized, sorted, and even shown off on stages. The game, particularly the Big Box Edition, is now the most coveted in the GameCube’s library, selling on average for $1,746.75 in completed editions. There is no sales data available on new versions – that’s how rare this game really is.

The game originally came with a GameCube-to-Game Boy Advance Game Link Cable, which allowed you to plug your GBA into the controller ports on the GameCube. This allowed you to use it as a two-button controller or exchange data between the game cart and memory card. With Pokémon Box, players could not only trade Pokémon, but they could even play Ruby and Sapphire on the TV.

The Nintendo GameCube was not the most popular console of its generation, being beaten out by the PlayStation 2 just as its predecessor was beaten by the PlayStation. However, its lack of popularity at the time has equated to an increase in collector interest later, with many of these games auctioning for over $1,000 when the condition is good enough.

From exclusive combo discs to games that simply undersold and reviewed poorly, turning into cult classics later, these GameCube games are true gems to see in auctions or at flea markets. They’re the diamonds that drive collectors out to their local swap meets week after week, hoping to catch a kid or parent with a cute GameCube game starring Mickey Mouse or Pikachu that’s actually worth hundreds, or thousands, of dollars. They might not know what they have. But you’ve read this list, so you do.