StockX is a stock market for luxury sports shoes and sneakers. It operates the same way as any marketplace, with prices rising and falling based on supply and demand. The worth of certain shoes is balanced by the sellers’ ability to ask prices and the buyers’ ability to post offers. The result is a shifting market of shoe values that always gives you the real-world worth of collectible sports shoes.

Some shoes might currently have higher “asks” since sellers inflate their prices when stocks are low (if they have the only example of a specific shoe, they might ask $100,000,000, for example). The average sale is closer to the actual worth of the shoes on the market, which is why we used it for our list.

Continue reading to learn about the current most expensive shoes on StockX, arranged by the highest average sale prices, which change often. 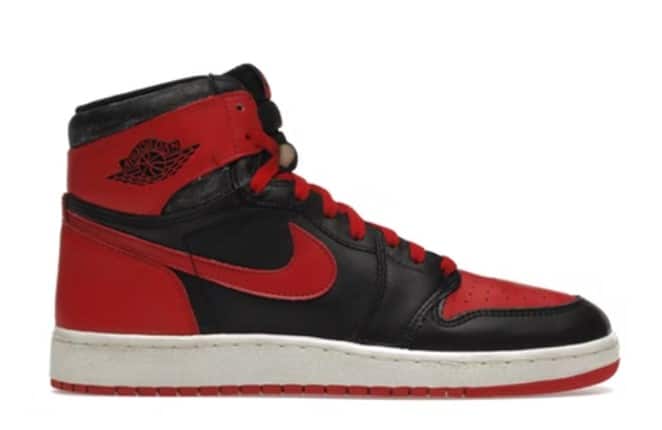 The white, black, and red Jordan 1 OG shoes, the original Chicago (1985) style, are some of the oldest Jordans out there. They originally retailed for $65 at the start of Jordan’s brand deal with Nike in the mid-80s.

The now-famous Bred colorway is based on the team colors of the Chicago Bulls. They became the focus of Nike’s “Banned” marketing in the 80s, which came about as a result of Jordan refusing to wear regulation shoes.

The NBA has a uniformity rule requiring all players to wear certain shoes. These black and red leather shoes cost Jordan $5,000 per game every time he wore them. 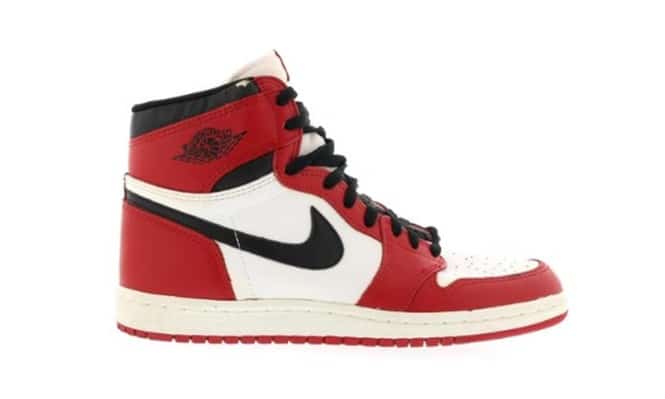 The Jordan 1 OG Chicago shoes are some of the oldest in this style available, released in 1985 back when Michael Jordan’s deal with Nike was brand new. These shoes therefore debuted with a low retail price compared to others on this list, originally selling for $65.

The Jordan 1 OG shoes were designed by Peter Moore from red, white, and black full-grain leather. They have a high molded collar with a Nike Air cushion midsole and an outsole designed for increased traction. This makes them ideal for playing basketball. Their lowest ask on StockX right now is $27,544 with an average sale of $20,000.

Peter Moore was Nike and Adidas’ creative director throughout the 80s and 90s. He designed the original Air Jordan 1 and Nike Dunk shoe silhouettes. 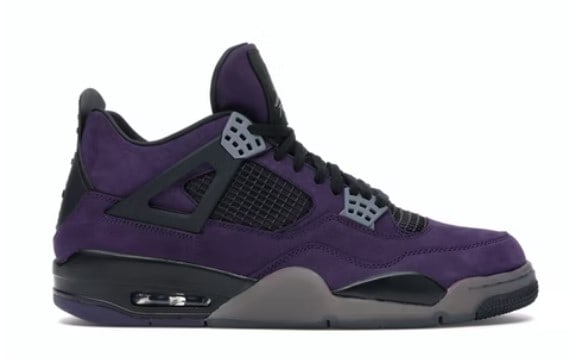 The Jordan 4 Retros in the Travis Scott Purple Style sell on StockX for an average of $25,000, with a current lowest ask of $45,000. They were made for Travis Scott’s friends and family first and then limited to around 1,000 pairs, released in July of 2019.

The shoes are made from purple suede with a black mesh grid, matte lace wings, and Visible Air tech. It also has a translucent rubber outsole. The shoes were designed by Tinker Hatfield and featured in Travis Scott videos.

Travis Scott was born Jacques Bermon Webster II. The rapper, songwriter, and record producer has been nominated for eight Grammys and won a Latin Grammy as well as a Billboard Music Award. 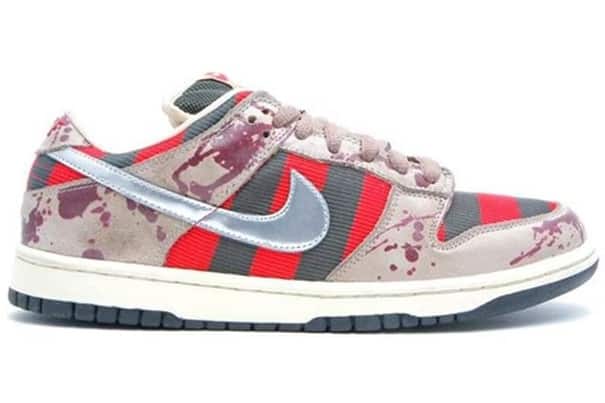 The Nike Dunk SB Low Freddy Krueger shoes have a lowest asking price of $32,000 right now, with an average sale on the site of $16,700. These shoes’ colorway is listed as “taupe/chrome,” but you should recognize the specific pattern that mimics Krueger’s sweater colors. They include pink, bright orange, dark grey, and a healthy dose of blood spatter.

The shoes debuted at the top of 2007 sporting the Zoom Air tech. The Nike “swoosh” is in chromatic silver to imply Freddy’s shiny silver finger claws.

Several Dunks based on horror icons were released, including one based on Friday the 13th’s Jason Voorhees. The Freddy Krueger ones were the only ones that were never released to the public, hence the high prices. 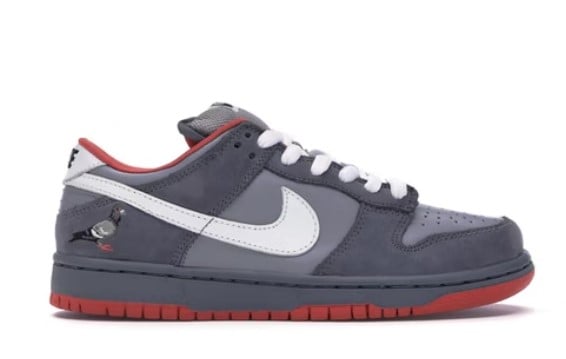 These charcoal grey Nike Dunk SB Low Staple NYC Pigeon shoes have a red rubber tread and insole. The current lowest ask is $48,765 for these rare Dunks, with an average sale on StockX of $19,040. That number seems to be skewed lower by recent sales, which have been as low as $81.

These shoes were designed by Jeff Staple and originally retailed for $200. They debuted at Reed Space, which is his shop on the Lower East Side in New York. The crowd was so huge when the shoes came out, with only 150 pairs available for purchase, that cops had to be called to control the commotion.

Staple would continue to design Pigeon Dunks for Nike after the success of these shoes, which re-established the brand as a mainstay of skateboarding culture in the early 2000s. The colorful outsole is meant to mimic the bright foot of a pigeon. 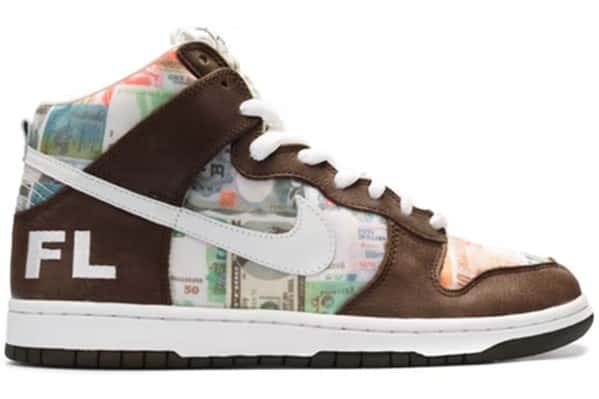 The lowest ask of the Nike Dunk High Pro SB FLOM sells on StockX for an average of $58,070. Only about 24 pairs of these shoes were made, which is why they’re coveted collector’s items. “FLOM” stands for “for the love of money” and were made in a collaboration between Nike SB Dunks and Futura’s fashion line.

They came out in 2004, debuting to the public in a raffle, built off the Dunk design. Futura’s abstract graffiti art carries on its legacy in these shoes.

Futura’s real name is Leonard Hilton McGurr. He rose to prominence in the 1980s, becoming a New York street artist with others such as Jean-Michel Basquiat and Keith Haring. 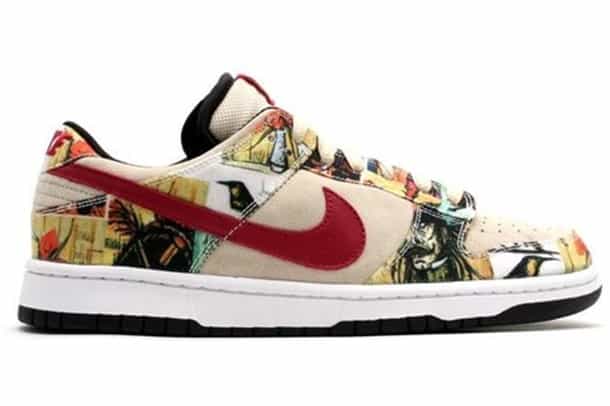 These shoes were released in 2002 with an original retail price of $60. They sell on average for $56,000, with a lowest asking price on StockX of $98,995. The color pathway is called “Rope/Special Cardinal” but it’s really a patchwork of art from Bernard Buffet, the deceased French expressionist, hence the “Paris” in the name.

Rumor has it that only around 200 pairs were produced, maybe less, which is why they’re so expensive. They were made for the traveling art exhibition, “White Dunk,” for its Paris show.

The French painter Bernard Buffet was a famous proponent of Expressionism. He made his name as a member of L’homme Temoin, an anti-abstract art group that translates to “Witness Man.” 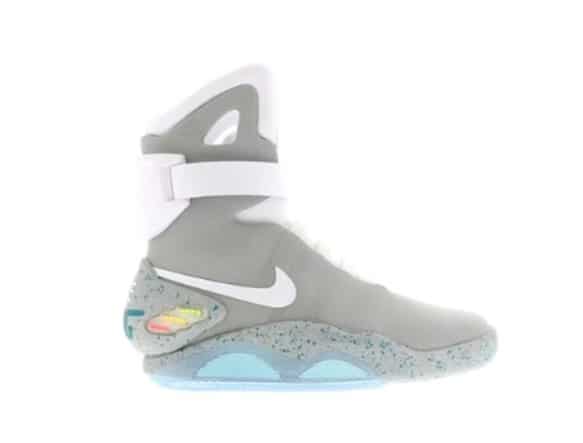 The Nike MAG Back to the Future shoes were released in 2016 based on the famous sneakers worn by Mary McFly in the film, Back to the Future Part II (1989). The current lowest ask for these shoes is $120,000, with an average sale of $66,142, making them nearly the most expensive shoes on the site.

The shoes were shown on-screen as part of the future segment where Marty uses them to skate on a hoverboard and escape the future bullies. They often sell at auctions for more than $100,000 in new condition.

These shoes re-entered public consciousness in 2007, 18 years after the film, when an animated bear wore them in the music video for “Good Morning” by Kanye West. 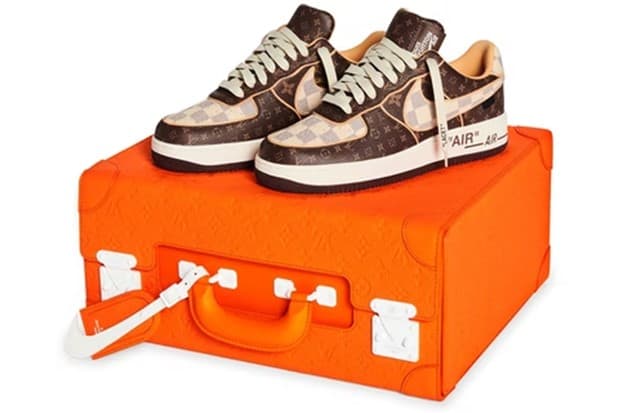 The most expensive shoes on StockX are the Nike Air Force 1 Lows. They were released earlier in 2022 and are still hot-ticket luxury sports shoes, made in a collaboration between Nike Air Force and the fashion house, Louis Vuitton.

The current lowest ask for these shoes is $179,000, but brand-new pairs in rare sizes can sell for up to $352,000, such as a pair of small US 5 shoes that sold at an auction on February 9, back when these shoes were brand new.

The Louis Vuitton fashion house was founded in 1854 in Paris, France, famous for ready-to-wear clothes, watches, jewelry, sunglasses, shoes, and even books. Its standalone boutiques and eCommerce store have driven LV to become the most valuable fashion brand in the world.