Star Citizen is still in development by Cloud Imperium Games, but it’s slated to be the biggest space trading, combat simulation, and massive multiplayer spaceship game ever made when it finally comes out. The game Freelancer was scrapped partway through development and repurposed into what is now going to be Star Citizen.

The game began as a successful 2012 Kickstarter campaign, raising $2 million for the game’s development. Despite criticism surrounding the game’s long and expensive development process, with many backers trying to get refunds, the game still appears to be coming.

When it arrives, these will be the 9 most expensive Star Citizen ships. No doubt the economy will shift and change once the game has an active player base, but for now, these are the ships that you can expect to shell out for when the game goes live.

The ship manufacturer Aegis Dynamics will pop up again on this list. Their Hammerhead Best in Show Edition is slated to debut at the in-game 2949 Intergalactic Aerospace Expo. It’s a multi-crew heavy gunship with a heavy loadout of weapons despite its relatively small length on this list of 115 meters.

The Hammerhead can handle multiple crews, 6 manned turrets, and a cargo elevator. It gets its name from the docking port on its front, which also contains the captain and crew quarters. It gives the ship that iconic “hammerhead” profile.

The Hammerhead Best in Show Edition will be sent out to take on multiple combat fighters in space battles involving large capital ships that need protecting. For fighter groups, the Hammerhead was also designed to be a potential flagship in smaller skirmishes. 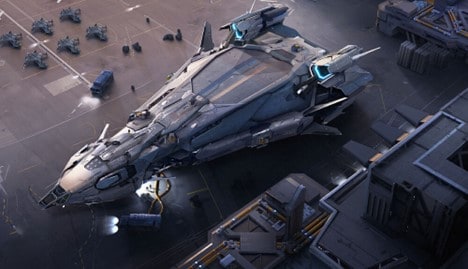 The capital-size Corvette is a ship by Roberts Space Industries. Despite its classification, at 155 meters, it’s the smallest ship in its class in the game. It comes decked out with a ton of weapons – 60 missiles, 6 turrets, and a deployable light fighter out of the ship’s compact but functional hanger.

Late in the design stage, a docking collar was fitted to the underside of the ship while its length was increased a bit to accommodate it. The Polaris will be available to players for $750 when it’s finally built.

The lightest capital-class cruiser in the Star Citizen fleet will be ideal for naval patrols as well as other militia operations, including search and rescue, security patrols, and light strike missions. 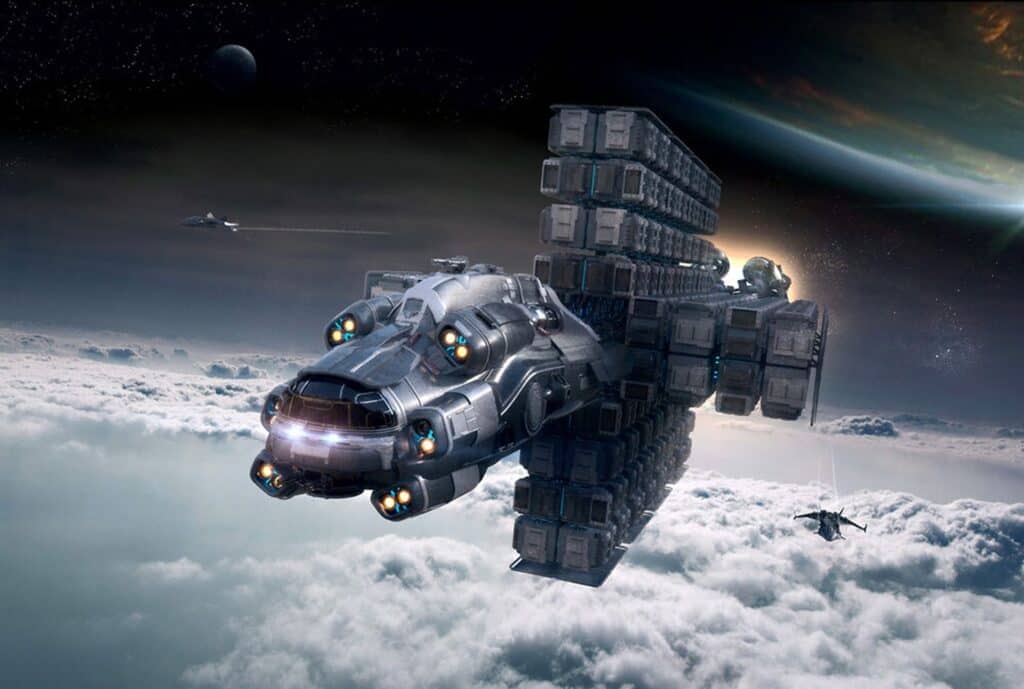 One of the biggest ships in the game will also be one of its most expensive. The 372-meter Hull E craft (the second biggest on this list) will be a vessel designed by the Musashi Industrial and Starflight Concern to carry heavy freight across the cosmos.

This enormous ship has an estimated cargo capacity of at least 8,192 SCU. It is listed on the pledge store as “the largest specialized freighter available.” It promises to have a full weapons loadout to compensate for the lack of maneuverability of such a large ship, as well as the most extensive cargo transport space in the game.

The Musashi Industrial and Starflight Concern will specialize in designing armored cargo transport ships with modular designs. Their concepts so far include not only the Hull series but also the anticipated Freelancer, Endeavor, and Razor cruisers. 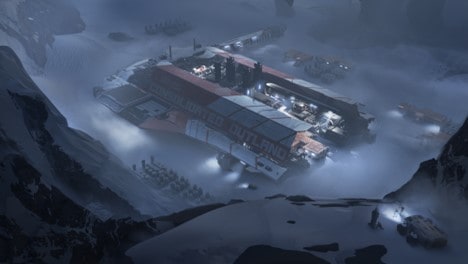 The heavy construction vessel known as the Pioneer is a capital-sized ship that will be used for creating planetary structures, which are vital to the colonization of planets.

This ship by Consolidated Outland is being called a “self-contained mobile construction yard,” which will give players that aspire to create new colonies the ability to move heavy freight and construction equipment in a single ship, land it, and use it as the basis for the modular structures of the new colony.

Consolidated Outland will also be the manufacturers behind the much-anticipated Nomad vessel, as well as the Mustang ship series, including the Mustang Alpha Vindicator, Beta, Gamma, and Omega. 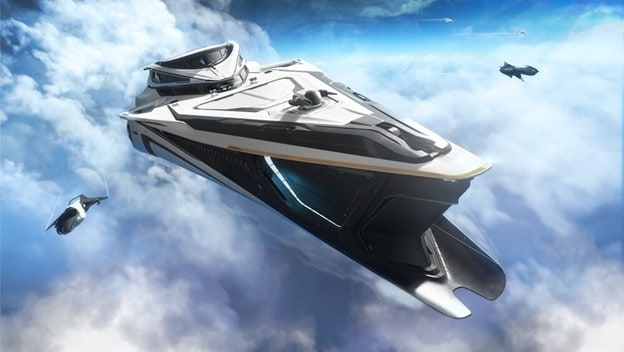 The 890 Jump is a ship designed by Origin Jumpworks GmbH for multi-crew use. In its 210-meter length it contains a ship hanger, four decks, a vehicle hanger, and a cargo bay. There are two bridges as well – the Battle Bridge and Main Bridge – both of which can control the ship.

The main draw of the 890 Jump is the Orlop Deck, which features a medical facility (tier 2), the battle bridge, hangar, landing pads, kitchen, engineering station, and recreation facilities. The ship will retail for $950.

The 890 Jump will come with an Origin 85X in the hanger, which is a 2-person touring ship also manufactured by Jumpworks.

Aegis Dynamics created this frigate for human use. The Idris-P is the civilian version of the Idris-M and can carry multiple crews in its capital-sized body (it’s 233 meters in length).

The Idris-P doesn’t have the ship-to-ship guns of its predecessors and replaces them with more cargo and engine speed, giving the ship a greater ability to carry its crews faster.

Aegis Dynamics is more famous for its military vessels like the Hammerhead and Avenger class ships. The Idris-P is part of a series of three similar ships that are differently equipped depending on their purpose. The Idris-P is the civilian version while the Idris-M is for military missions and the Idris-K is a weapon kit and frigate.

The Kraken Privateer is a multi-role ship that usually functions as a light carrier. It was manufactured for human use by Drake Interplanetary and functions mostly as a moving hub for commerce. The ship has room for 10 shops in total, including a public and private market.

It can be used as a spacecraft carrier, transporting smaller ships that it can also repair and refuel. The Kraken Privateer is worth $2,000, with the normal Kraken-class ship also being expensive but not quite as much.

The pledge store describes this capital-sized ship as “both a sanctuary and a self-contained war machine ready to take on the most daunting adversaries.” A crew of 10 can handle this profitable monstrosity.

The Javelin is a huge ship that will be Aegis Dynamics’ largest destroyer-class ship at an astounding 480 meters in length. The ship will be worth $3,000, making it nearly the most expensive ship in Star Citizen.

The ship has armaments worthy of a destroyer-class vessel, with six turrets on the underside, nine on the top, and two torpedo launchers. The ship also has a hanger and cargo lift.

At the $41 million stretch goal, Star Citizen published concept art of the Javelin. The ship could be seen controlled by NPCs as part of the launch fleet of the UEEN Invictus, part of Invictus Launch Week 2950. 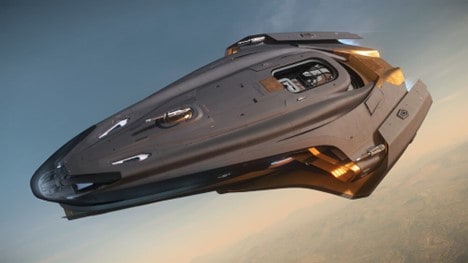 For players, the ship is only available as a reward upon reaching the Legatus Navium Concierge rank, which requires a spending of $25,000. So even though this ship cannot be bought like a conventional vessel, the spending requirement is so steep that it will still the most expensive ship in the game at launch.

Inside the ship is a fully stocked G12 touring vehicle that will be ready for player use immediately. The interior is also in pre-concept stage design and will be updated at some point in the future.

This ship is 91.5 meters in length and sports a host of powerful weapons, including 3 gun hardpoints, 2 turrets, and 4 missile racks. The ship also has room to transport a vehicle and 2 support stations.