The Rubik’s Cube was created by a Hungarian architect named Ernő Rubik in 1974, though it was originally called the “Magic Cube.” It was sold by Ideal Toy Corps. before spinning off into its own brand. The original Rubik’s Cube had 6 colored sides, with 21 parts, 54 separate surfaces, and as a result, has a total of (wait for it) 43,252,003,274,489,856,000 possible color combinations. That’s over 43 quintillion configurations!

Over 350 million Rubik’s Cubes have been sold and they can be readily bought online for around $20. However, some brands and inventors have gone all-out with this little puzzle, creating more complex and expensive variants than ever before. Here’s our list of the 9 most expensive Rubik’s Cubes that money can buy. 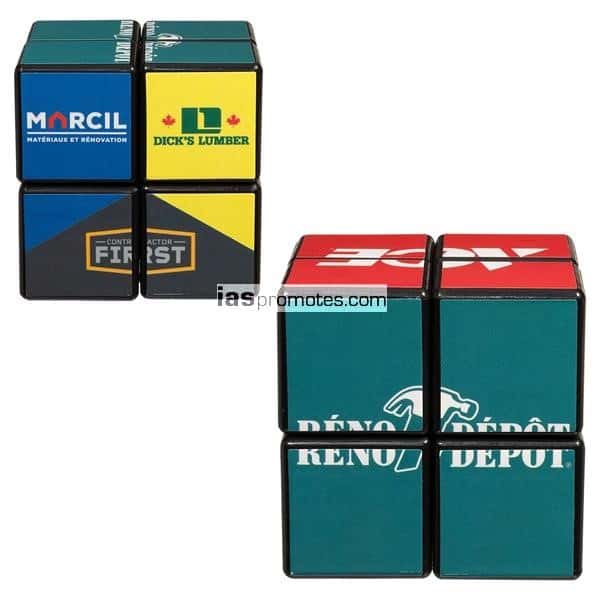 The cube called the Full-Size Rubik’s 4-Panel Custom Cube is not a difficult puzzle, with only four cubes to each side. Instead, the cube is a marketing device, offering companies the chance to display full-color pictures of your brand’s logos and sponsors on the faces of the cube.

There are more expensive Rubik’s Cubes that could occupy this list. However, these custom marketing cubes by ias promotes can only be bought in a quantity of at least 500, making the minimum purchase price of this Rubik’s Cube $7,070.

These exclusively promotional cubes can be bought and wrapped as gifts to business contacts and potential customers. They can be shipped and sold by the unit or in batches, though they all have to be bought at once. They are made from 100% pre-consumer plastic. 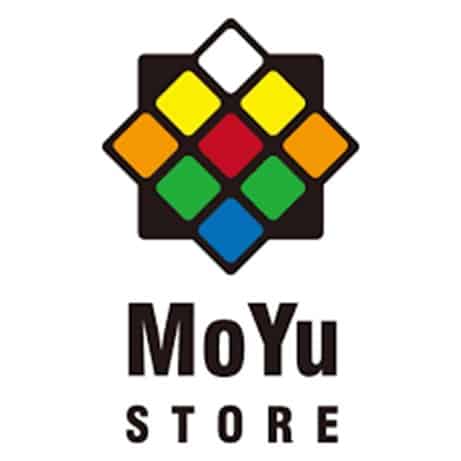 This Rubik’s Cube by YJ MoYu is a 13x13x13 puzzle, meaning it has vastly more combinations than the default puzzle. This one is marketed as a gift for experts. If you know someone who’s bored of the puzzle and wants an exponentially (literally) harder challenge, this cube might do the trick.

MoYu is owned by YJ, whose factories churn out the speed cubes and fancy puzzle gifts sold in their store. YJ uses them as a platform to brand toys for a professional market. Their products include incredible models for all ages, ranging from puzzle boxes to sculptures of wildlife to models of working machinery. 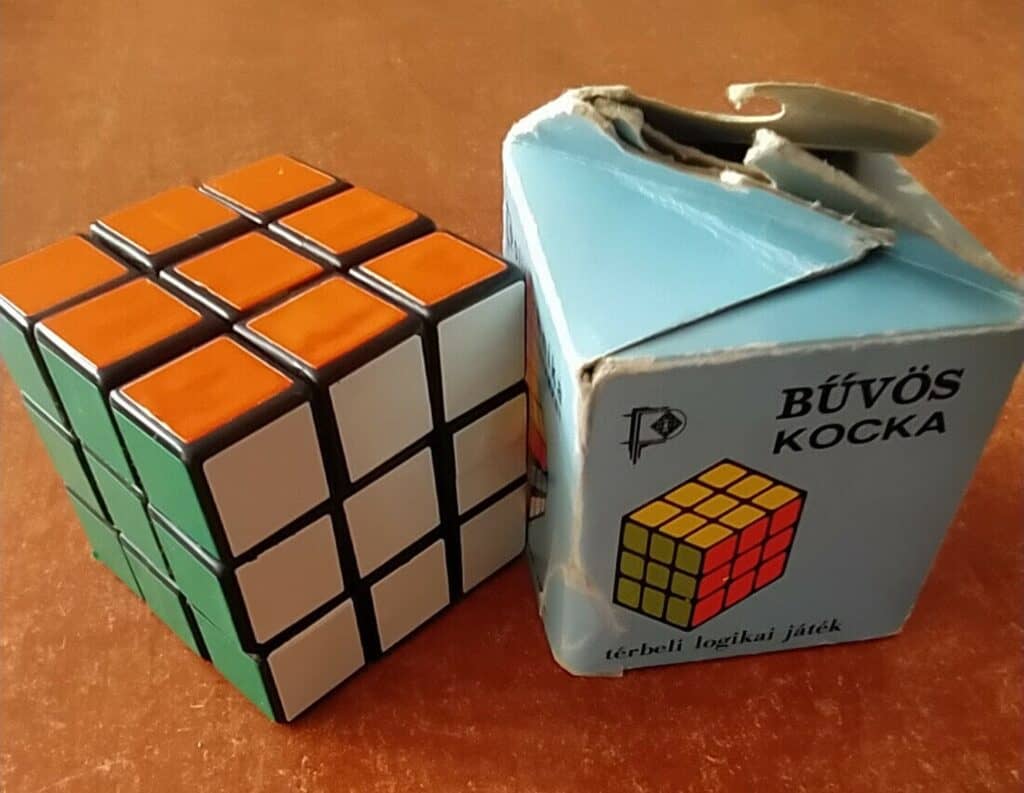 This vintage Rubik’s Cube is so old that it is listed as “Magic Cube” on the box in the original Hungarian (“Buvos Kocka”). The toy category is listed as “terbeli logikai jatek,” which means “spatial logic games,” in conjunction with the “Politechnika Ipari Szovetkezet,” all printed on the cube-shaped cardboard box, which is still intact. The cube itself is in great condition for its age, which goes back to 1977, only three years after the first Rubik’s Cube’s invention.

What makes this Rubik’s Cube unique even among the antique ones is that it’s old enough to be part of the very first batch of the toy’s creation. This Cube sold on eBay in February 2022 for $450.

This cube was from the time when the toy was limited in scope to Budapest, released under the banner of “Hungarian Magic Cube.” It was in 1980 that it gained its own label as “Rubik’s Cube” and started to be sold globally. 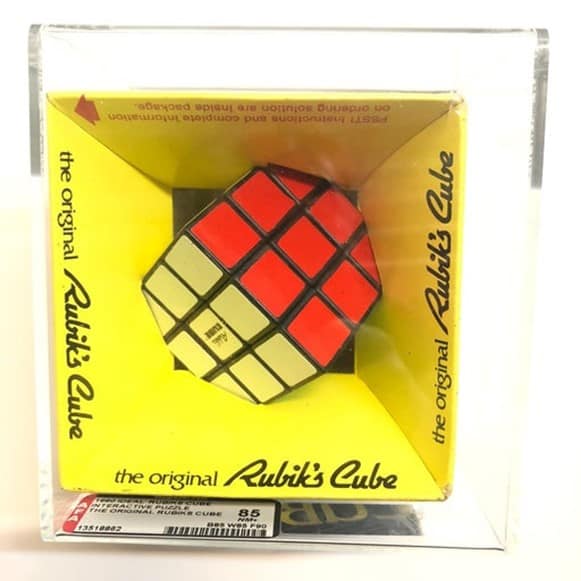 This Original 1980 Rubik’s Cube Unopened is on sale on Mercari for $548, plus shipping. While most Rubik’s Cubes on this list are expensive by design, this one is now pricey due to its condition. It has not only the original packaging but also its original shrink wrap, sealed all the way around, making this 1980 example of the Rubik’s Cube (which was only 6 years old at the time) a rare find for any toy collector.

Toygrader, the toy evaluation service, graded this Rubik’s Cube 85/85/90, according to the label, certifying its authenticity and condition. 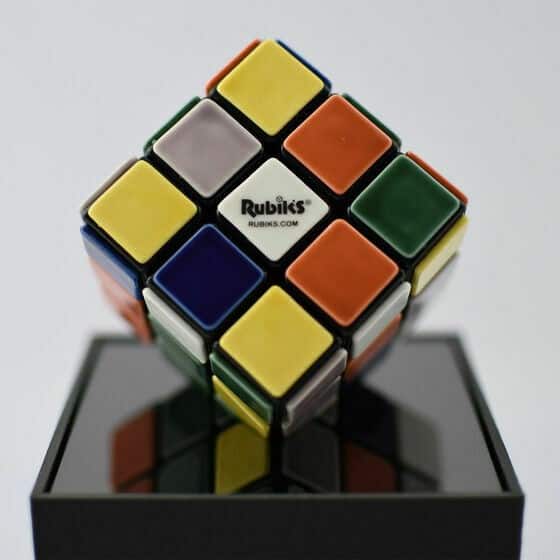 This Rubik’s Cube was made in a collaboration between Rubik’s and Megahouse Co., Ltd. in Japan. They incorporated traditional Japanese painting and craftsmanship to create a truly unique take on the classic puzzle. “Kutani Gosai” is the red paint used in this technique and is common in all Japanese Kutani wares.

The 1st limited model of this cube is on sale on eBay for $1,190. It comes with a display pedestal so people can admire the traditional colored paints used on each square of the puzzle.

Kutani ware usually involves painted porcelain, a celebration of dark colors and painstaking designs using a five-color style that was a nice match for the sides of the Rubik’s Cube. Of course, the cube has 6 sides, so Megahouse added white, not traditionally painted in Kutani ware, to complete the piece. 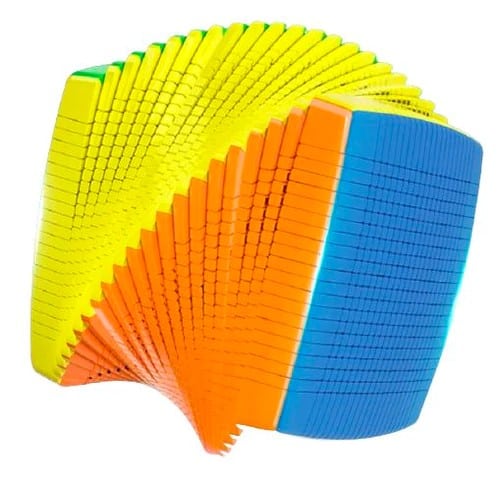 The 21x21x21 Super Big Cube is one of the largest on this list. When it was made, it was billed as the “world’s largest,” though we’ll soon see that this is no longer the case. The brand MoYu created this cube from 2,709 cut plastic pieces. Its beefy construction weighs 3.15 kg.

Though this cube is not technically by the company, Rubik’s, we included it because it is designed after that model and fans of the famous puzzle couldn’t go wrong with this monstrous challenge, provided they can shell out the $1,574 that this cube costs.

MoYu is a puzzle and games company that specializes in educational models. They go beyond toys to create things like a 4-cylinder car engine model that can be used to teach automobile assembly to classes of engineers. 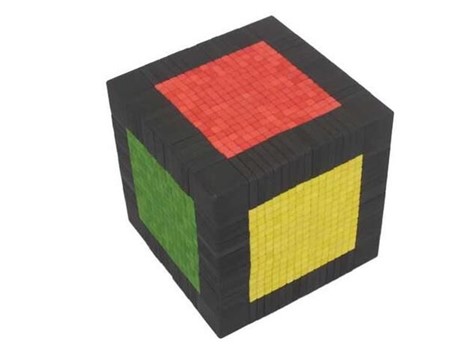 The Over the Top Rubik’s Cube is a 17x17x17 puzzle. Its construction had record complexity at the time it was made in 2011. Shapeways provided the 3D printing technology that made the cube’s manufacturing possible. The process failed twice, but on the third time, 2 days and 12 hours into the printing process, this incredible cube was finished.

Oskar van Deventer is a Dutch puzzle designer who has worked for telco and TNO. After creating the Over the Top Cube, he shifted his focus to blockchain networks and has since been refining mobile gaming and crypto trading processes for several Dutch networks. 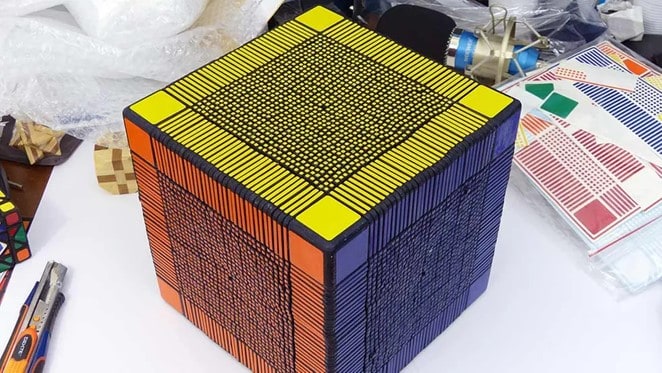 The Greg Pfennig Cube is the most complex cube on this list, a 33x33x33 creation made for people who can already speed-run the default Rubik’s puzzle. The cube contains over 6,100 components, amounting to a truly complex version of the classic game, worthy of a mechanical engineer’s take on it.

The Greg Pfennig Cube listed here is sold for around $16,000 and has the Guinness World Record for being the highest-order Rubik’s Cube in the world.

Even for someone who had mastered the default cube, Pfennig has stated that his cube would take over 300 hours to solve. He has capitalized on his skill at making Rubik’s Cubes and now runs the successful YouTube channel, Greg’s Puzzles. 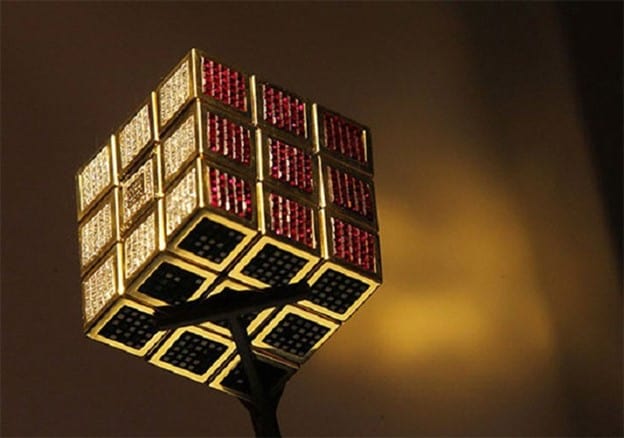 The most expensive Rubik’s Cube is the Masterpiece Cube. It was made by Diamond Cutters International and released in 1995 in commemoration of the Rubik’s puzzle’s 15th anniversary. This Cube is decked out in all manner of precious metals and stones that drive up its price to a staggering $2.5 million.

The colored squares of this amazing piece are each a different precious stone. The green squares are emerald, the red are rubies, the white are diamonds. The frame of the cube is sculpted from 18k gold. This cube is not a sculpture, however – it can be twisted and solved like a normal Rubik’s Cube, though the manufacturer warns that rough handling can damage it.

This Rubik’s Cube was the centerpiece of an exhibition on the toy called Beyond Rubik’s Cube. It was put on by the Exhibits Development Group to celebrate the puzzle’s 40-year history.