LEGO was invented in Denmark, Billund to be exact, by a man named Ole Kirk Christiansen, in 1949. The company, The LEGO Group, was actually founded in 1932, but they didn’t come up with their ingenious interconnecting plastic blocks until later. The word “LEGO” actually refers to a Danish phrase, “leg godt,” which means “play well.”

Whether you’ve been playing with them since you were a kid or just got into them as an adult, LEGOs are synonymous with fun. But you usually won’t pay thousands of dollars per set, which is what we’re talking about today. These are the 8 most expensive LEGO sets out there. 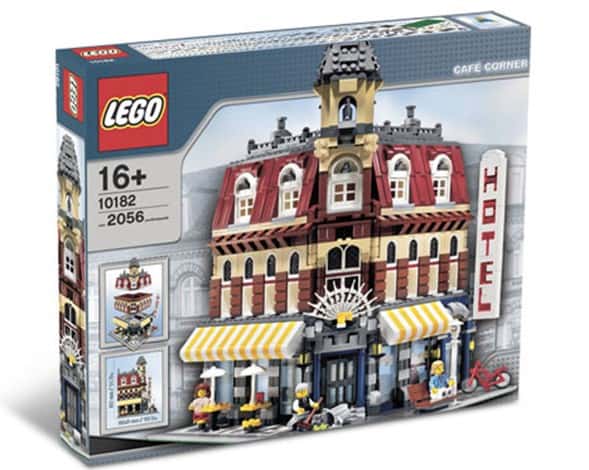 The LEGO Make and Create Café Corner is one of the most expensive LEGO sets not part of a limited edition or a LEGO tour. It was released in 2007 but discontinued in 2009, with its short lifespan driving its now incredible resale value.
The 2,056-piece set (plus three unique minifigures) costs $3,249.99 at Walmart, which is unique in that you can still buy it new from a major retailer, at least for now. Most of the sets on this list can only be bought through specialty sites or eBay auctions.

The Modular Buildings sets were made for bigger kids 16+ to enjoy architecturally complex LEGO sets. The gimmick was that these huge, detailed buildings could connect with up to 12 others to form a huge LEGO village. The 10182 Café Corner connects with Market Street, Fire Brigade, Green Grocer, Pet Shop, Grand Emporium, Palace Cinema, and the Town Hall to create the LEGO Street layout, one of the brand’s most coveted completed constructions. 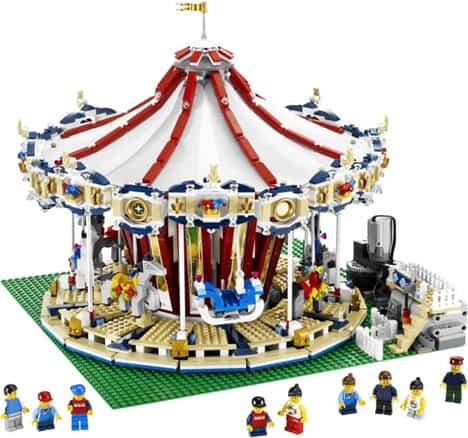 The Grand Carousel was in the Sculptures set, released by LEGO in July of 2009. It’s unique on this list (and among LEGOs) in that it’s one of the sets with Power Functions. In this case, the set spins and plays music like a real carousel. It’s one of the largest sets on this list, with 3,263 pieces, plus nine minifigures.

The Grand Carousel has swing boats, jumper horses, a center pole, and tons of reflective decals. It’s over 12” tall once completed. To buy The Grand Carousel, you’ll have to shell out as much as $3,305, though it only cost $249.99 on release.

Most LEGO sets are intended for kids ten and under. However, as those kids have grown up, the market for adult LEGO sets has grown exponentially. This includes The Grand Carousel, which has so many complicated moving parts to build that it is only recommended for users sixteen and over. 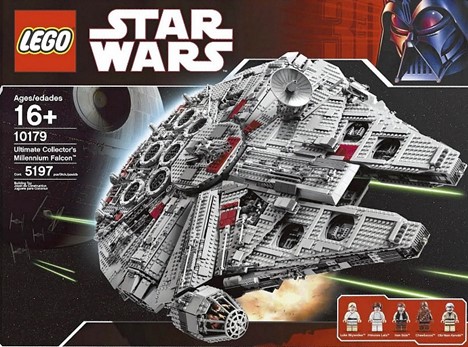 Star Wars LEGO tie-in sets are coveted and expensive even on release. The infamous Ultimate Collector’s Millennium Falcon set was released in 2007, before Star Wars had anything to do with Rey, Disney, J.J. Abrams or anything other than the core saga. It was released for $500 at the time of release, so collectors pretty much knew it was destined for greatness, even at the time.

The Ultimate Collector’s Millennium Falcon now scores thousands of dollars in online auctions, sometimes as much as $3,730. Even in lower conditions, the set sells for over $1,000.

This set is the largest on this list as well as the third largest ever released by LEGO, with over 5,000 pieces (the instruction manual is 311 pages long!). It also includes figures of the famous Star Wars heroes, including Luke, Leia, Han, Chewbacca, and Obi-Wan. The most expensive versions of this set are from the original first run where LEGO released limited first editions, which can be distinguished by a certificate of authenticity. 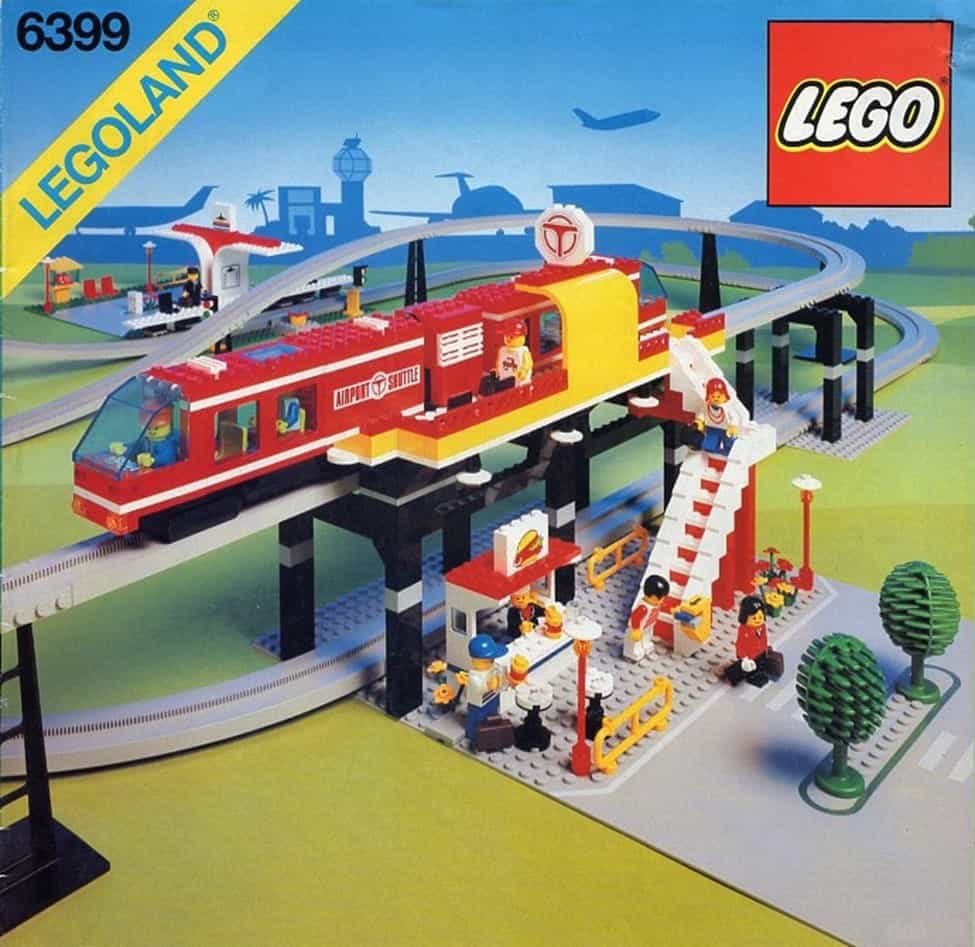 The Monorail Airport Shuttle is one of the older sets on this list, being sold back in 1990 as part of the LEGO’s series called “Town Airport.” The Monorail Airport Shuttle set has two rail cars powered by batteries on a track that loops around between waiting stations, phone booths, lamps, and a hamburger stand. It also includes nine thematically relevant minifigures.

The main reason this set is so rare is that LEGO did not produce it in-house. They outsourced it to another company that has since gone bankrupt. This means that the tools and pieces used to make the set don’t exist anymore. Its price tag of $3,989.00 comes from this rarity.

Monorail sets had become staples of LEGO since the first one, the Monorail Transport System, released in 1987. The white drive module for the 1990 set is identical to the 1987 one except for the red plastic cover. 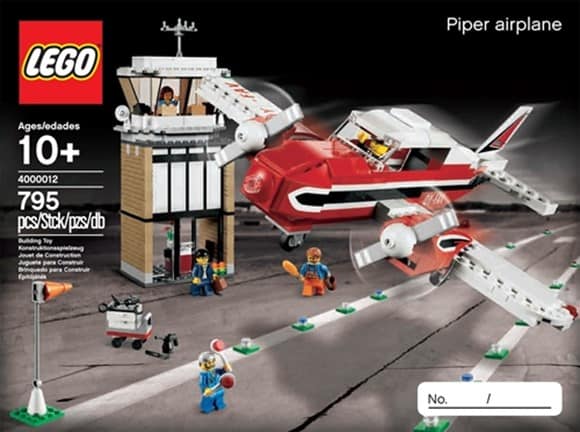 The Piper Airplane set is another of the Inside Tour Exclusives that LEGO gave out to its patrons in limited quantities. This particular set is one of the scarcest of the bunch, with only 53 being made for the 2012 LEGO Inside Tour.

The estimated price of the Piper Airplane is over $5,300 according to BrickEconomy. However, the most expensive we could find was one that sold for $4,016. It is predicted to grow in value over the next few years due to the decreasing supply of this rare set.

The Piper Airplane is based on the airplane purchased by the LEGO Group in 1962, meaning it has value both for pure toy collectors as well as LEGO company memorabilia fanatics. 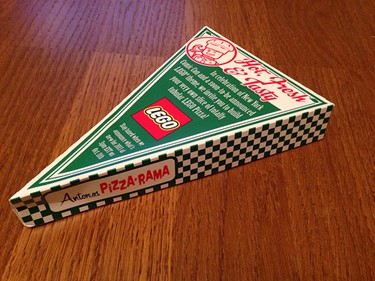 This cross-promotion with Teenage Mutant Ninja Turtles created a truly unique set. The Antonio’s Pizza-Rama Pizza set was sold at the 2012 New York Comic-Con. It came in a unique, pizza slice-shaped box, patterned off Antonio’s, the turtles’ favorite pizza joint.

When built, the set looks like a single slice of pepperoni pizza. Its cuteness is somewhat disarming since this promotional set now sells for $4,276 when the condition is just right.

Antonio’s Pizza-Rama pizza is the first food that the Teenage Mutant Ninja Turtles tasted after becoming mutant. It has played a frequent role in their lives from then on. It’s also a real restaurant chain in New York City and elsewhere. 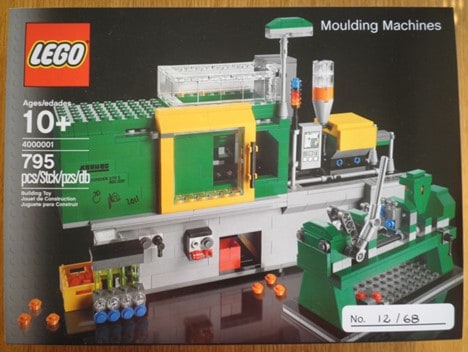 The LEGO Moulding Machines set is nearly 800 pieces of realistic LEGO-making simulation fun. It’s literally a LEGO version of the moulding machines that the company uses to make the LEGO bricks that made this set. This set almost never goes up for auction due to its rarity. When it does, it can fetch up to $5,000.

The reason for this set’s rarity is that like the next entry on our list, the LEGO Moulding Machines set was made in a limited edition (in this case, 68 sets), and given out for free to attendees of the LEGO Inside Tour. In 2011, 68 people got for free what would later become a gold mine, if they kept it intact.

This set should not be confused with set 40502, the Brick Moulding Machine set. However, it’s unlikely you would ever even see this set as it can only be bought at the LEGO House in Denmark (but with eBay, you never know). That set currently sells for 599 Danish Krones, the equivalent of $91.40 USD. 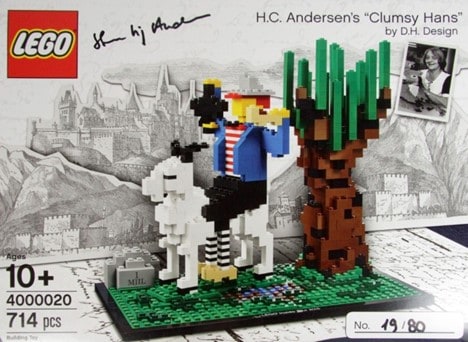 The most expensive LEGO set is the H.C. Andersen’s Clumsy Hans set. This was an exclusive set available in 2015 that was only produced 320 times. 120 were given out to lucky members of the exclusive LEGO Inside Tour. Another 50 or so sets were given to the employees managing the tour for each of the four tours conducted.

This set was produced in 4 different sets of 80, meaning that there are different back photos and printed sleeves for each batch. All are equally valuable, however, with the H.C. Andersen sets often selling for over $7,300.

The set is a literary reference to a Hans Christian Andersen fairytale called, “Clumsy Hans” or “Blockhead Hans.” While not as well-known as his other works (like “The Little Mermaid”), this story depicts a blockhead trying to woo a princess using his dithering literal-mindedness, which ends up working. The set depicts him riding a “horse” to meet his love, which was actually a goat.

LEGO sets for both adults and children can become scarce collector’s items due to how they were released. Many of the sets on this list were limited edition releases handed out to participants in LEGO Inside Tours, making them extremely valuable now. Buying these new or intact will set you back a few thousand dollars, even on the low end. But a Millennium Falcon that big and detailed? Obviously worth it.