As a variety of carp, koi domestication may have roots in 4th-century China. However, it wasn’t until the 19th century that Japanese fishermen started catching wild koi. These colorful fish were then cared for by rice farmers, leading to domesticated koi breeding in Japan.

Over the years, Japanese koi breeding practices have led to even brighter, more colorful fish.

Koi became more and more popular as the domestic population increased. Modern examples of koi fish can cost less than $10, but some sell for thousands or more. 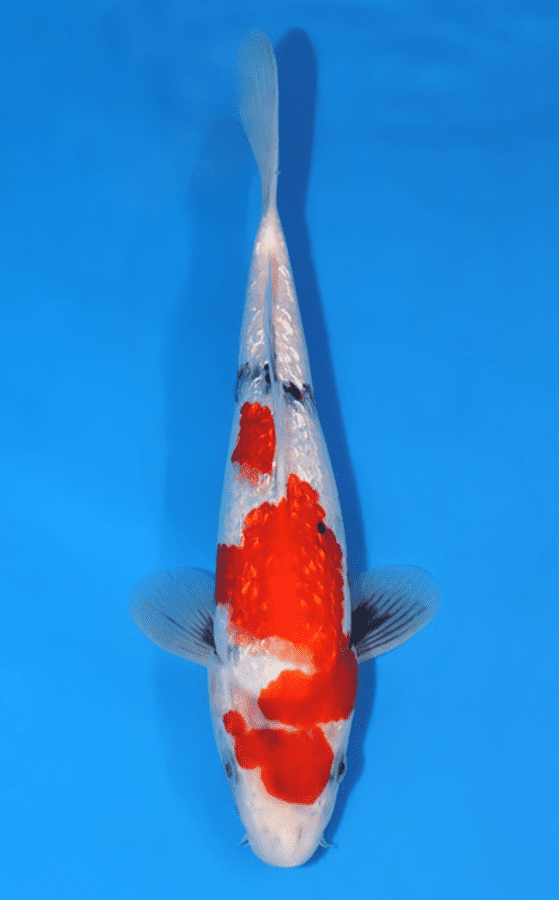 Ginrin koi are characterized by their iridescent, sparkling scales. The fish can develop a wide range of colors and patterns, but it’s pretty common to find Ginrin with orange splotches or with mostly yellow-gold bodies.

Ginrin koi have bright, “diamond scales,” but they’re not the same as metallic koi. The main difference comes down to how these scales sparkle under sunlight.

Although there might be similarities between two different fish, the patterns or splotches of color on a Ginrin koi are actually unique like a fingerprint.

In Japan, koi are sometimes called Nishikigoi. This roughly translates to “swimming (or living) jewel.”

Price: $100+
Alternate Name: Taisho Sanshoku
Coloring: White with red and black markings
Interesting Fact: These were the first tricolor koi to be developed

Taisho Sanke (sometimes just called Sanke) are tricolor koi, with large patterns of black across a white body and smaller red markings. Interestingly, Sanke were the first tricolor koi to be developed.

Sanke are part of a group of koi called the Big Three. These fish include Kohaku, Sanke, and Showa koi.

Unlike some varieties of koi, historians aren’t sure if the first Taisho Sanke was intentionally bred. However, reports say the variety probably first showed up around the 19th century.

While the exact origin of Taisho Sanke is unknown, we do know the fish was displayed at an exhibition in Tokyo in 1914.

Taisho Sanke might have a murky history, but reports say some of the first Sanke were found in Ojiya City, Niigata.

Price: $120 – $200 (or more)
Alternate Name: Alternate names depend on the fish’s color
Coloring: Wide range of colors, but always with a “black pinecone” pattern
Interesting Fact: These koi are considered one color regardless of contrasting scale patterns 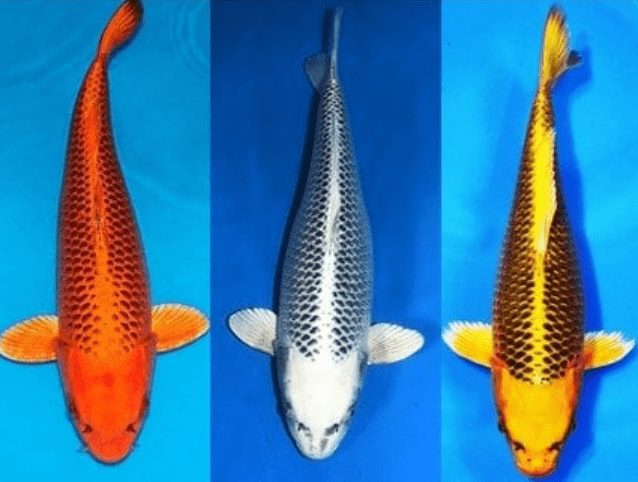 Matsuba koi have a variety of alternate names that depend on the specific fish’s coloring. Interestingly, despite their contrasting scale patterns, these fish are considered to be one solid color, making them members of the Hikari Muji class (koi that are a solid color without additional markings).

Matsuba are easily recognizable thanks to their “pinecone” pattern. This effect is created by scales with dark centers outlined by edges that display the fish’s body color. This variety is also characterized by its metallic scales which glisten under the sunlight.

If a Matsuba koi has an orange body, it’s called Orenji Matsuba. 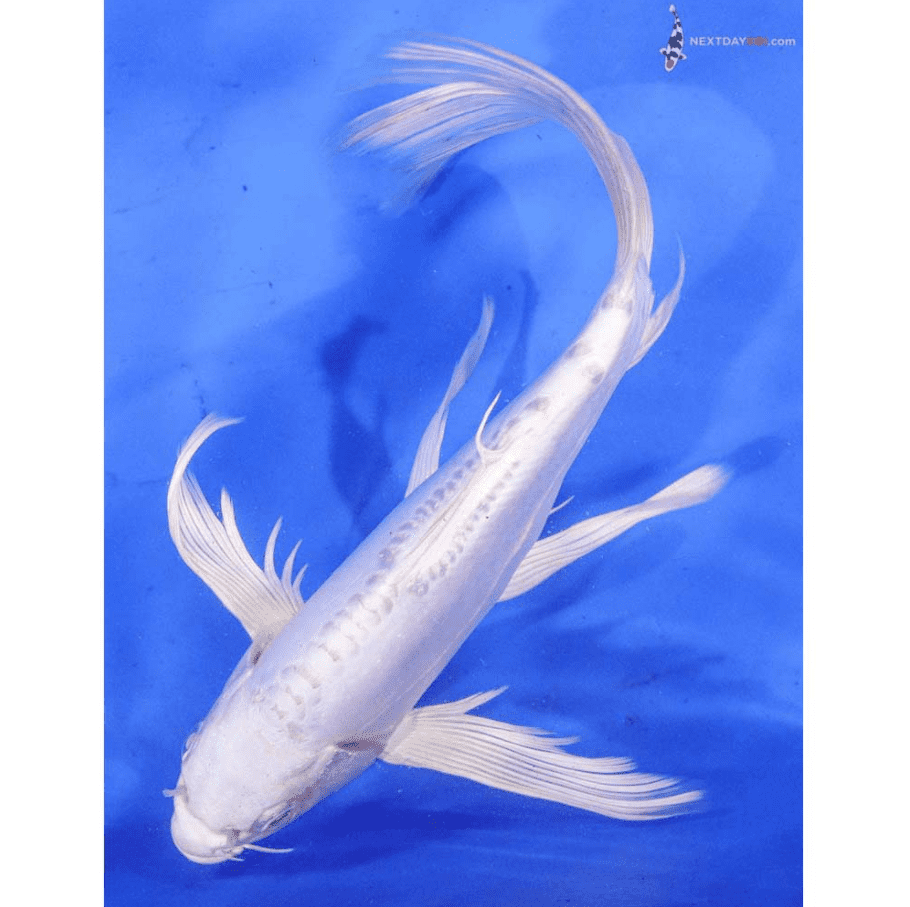 With price tags easily reaching $300, Platinum Ogon are some of the most expensive koi on the market. These metallic fish have solid white bodies with no patterns.

Interestingly, some fish sellers might try to market a Yamabuki Ogon as the Platinum variety. However, Yamabuki koi can be spotted thanks to patches of yellow at the base of their pectoral fins.

The Platinum Ogon is sometimes called Purachina Ogon in Japan, but they’re usually referred to as Platinum among American koi enthusiasts.

According to one report, people may purchase Platinum Ogon koi because their pond or tank is dirty and this variety is easy to see through murky water. 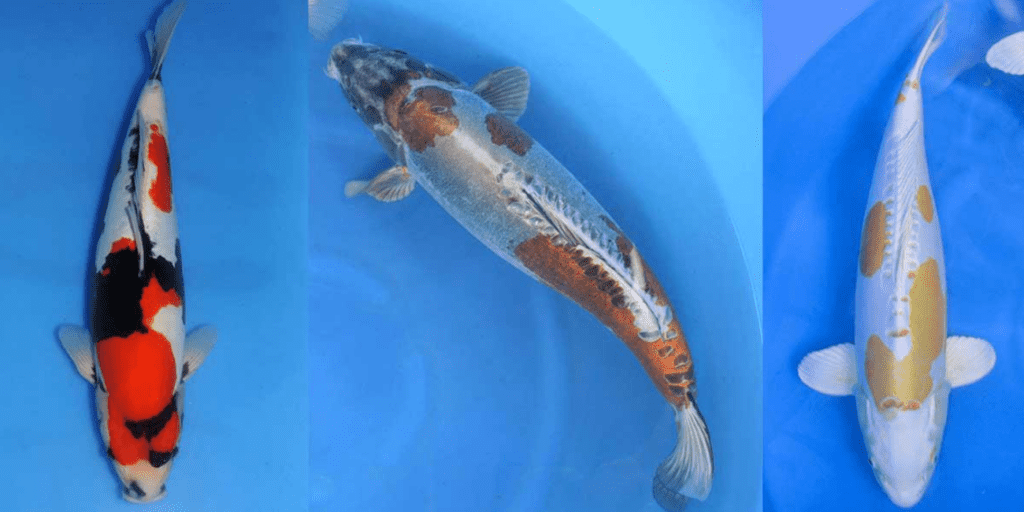 Although Doitsu koi develop a wide range of striking colors, the variety’s most prominent feature is its scaleless body.

The breed was developed about 100 years ago and has since seen several new variations. This is because Doitsu’s scaleless body can be crossed with other koi varieties, resulting in things like a scaleless Ginrin.

Prices for Doitsu koi vary quite a bit, but it’s not uncommon to see these sea creatures selling for about $500.

Although many koi originated in Asia, this variety actually comes from Germany. In that country, Doitsu koi were often used as food rather than decorative pets since their scaleless bodies were easier to work with. Doitsu were eventually brought to Japan, where they were also used for food before becoming pets.

Price: $600 – $700
Alternate Name: Other names depend on coloring
Coloring: Reddish or orange
Interesting Fact: Defined by its non-metallic black base color 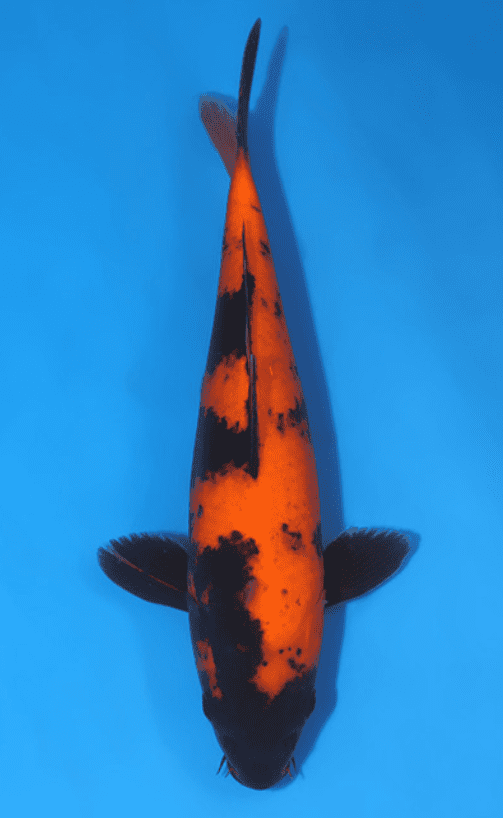 In the context of Japanese koi fish, the word Hi means red. However, Hi Utsuri are actually black koi with red coloring. Another variety of Utsuri is the Ki variation, which is black with yellow markings. These markings are referred to as secondary colors.

The price range for Hi Utsuri varies, but many sell for $600 or more.

Although secondary colors vary, Utsuri koi are defined by their large segments of alternating pigmentation. These colors wrap around the koi’s body. When analyzed, experts check to see if the pattern stretches from the fish’s head to the tail. If it doesn’t, the fish may not be classified as an ideal Utsuri.

If one of these fish has white as its secondary color, experts label it Shiro Utsuri. This variety is the most prevalent in the Utsuri family. 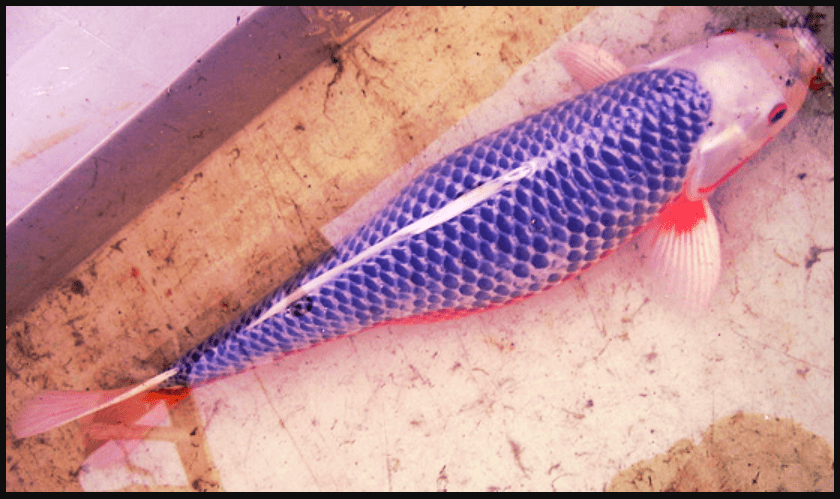 Asagi is one of the oldest koi breeds in the world. The fish has non-metallic scales in a diamond-like pattern, typically with blue pigmentation and splotches of red (like the Utsuri, these red splotches are called Hi).

Although standard Asagi are blue and red, some variations have more red pigmentation, earning them the name Hi Asagi. Other Asagi koi develop lines of white scales alongside the standard blue and red pattern. These are called Taki Asagi.

With prices easily hitting $950 or more, Asagi koi are among the most expensive varieties on the market.

Although a “flawless” Asagi would technically have a white head, these fish often have gray-toned heads. In some cases, the head will also feature red pigmentation. 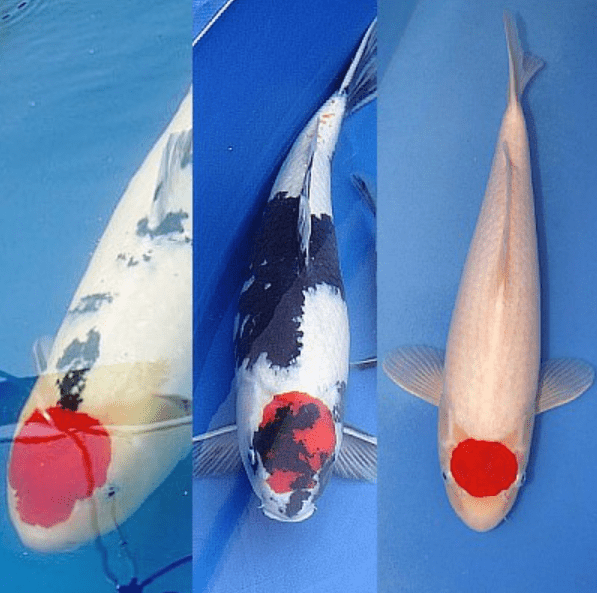 Tancho koi are characterized by a single red circle on top of their heads. Interestingly, the word Tancho closely translates to “red sun.”

Since the marking on their head looks similar to the Japanese flag, Tancho koi tend to be held in high regard among Japanese koi enthusiasts. Because of their popularity, this variety of koi often sells for more than $1,000.

Although other koi (like the Hi Utsuri) may have red markings on their head, the Tancho is distinct due to its unmarked body. If a koi has red markings on its head and body, it’s not a Tancho.

As with other koi, the Tancho’s red marking is called Hi. 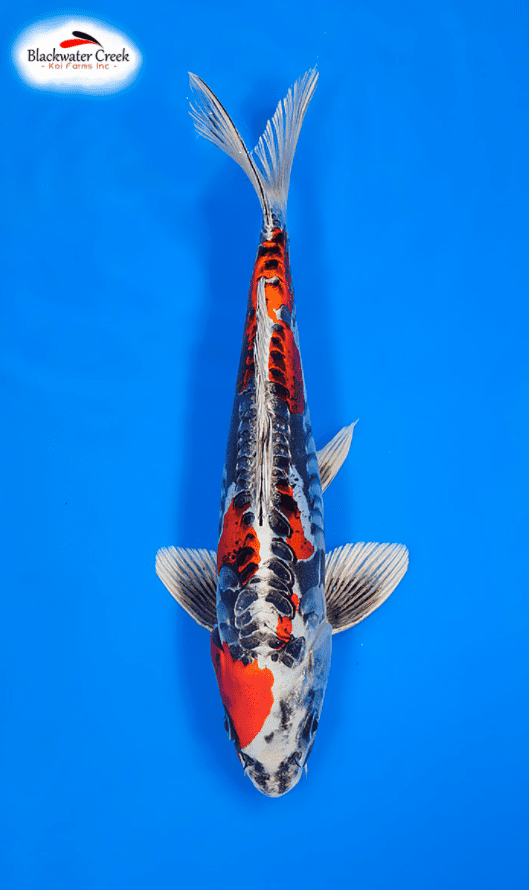 These pricey fish easily sell for $2,000, making them some of the most expensive koi in the world.

The Beni Kikokuryu is characterized by its scaleless body and metallic shine. The body’s coloring can include white, black, blue, and silver, but the fish always features more than one color.

Alternate names for this variety of koi depend on coloring. In some cases, these koi will actually be mistaken for Ghost koi and other breeds.

Interestingly, this variety of koi can actually undergo color changes depending on factors like water temperature.

Beyond ensuring the koi has good skin luster and sheen, experts will check a Beni Kikokuryu’s head for blemishes before making a purchase. 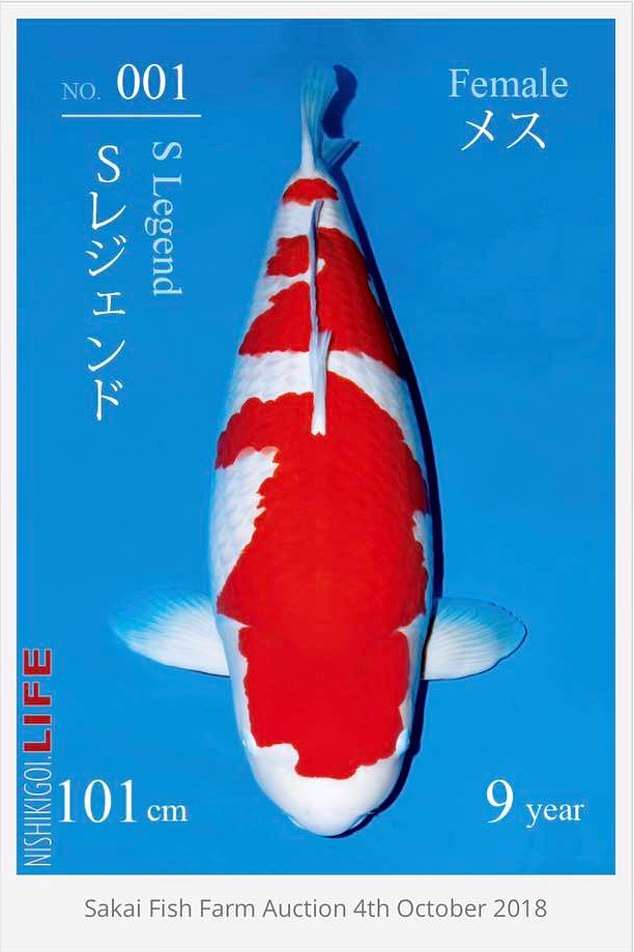 S Legend (Kōhaku) is the most expensive koi in the world.

S Legend is a Kōhaku koi that sold for nearly $2 million. The nine-year-old fish was a “perfect” example of the breed, with bright splotches of orange along a white body.

The fish came from a koi farm run by Kentaro Sakai, an award-winning koi breeder in Hiroshima, Japan. S Legend was purchased by a woman from Taiwan named Miss Yingying.

S Legend got much of his price thanks to his bright coloring and lack of blemishes. As one report put it, “the better-looking the fish, the more a buyer is willing to pay.”

Although sources are limited, some reports say S Legend died in 2019.