Counter-Strike: Global Offensive or CSGO is a team-based shooter developed by Valve (the guys behind Half-Life and Steam itself) for PCs and consoles in 2012. Since then, the advent of online gaming, especially as a competitive sport, has made the game one of the most valuable software properties in the world. The game has no fewer than 11 million active players per month and now makes its money completely from revenue generated by skin and upgrade trading, as the game has been free-to-play since 2018.

As one of the largest and most competitive esports in the world, CSGO also has one of the most active and valuable cosmetics trading markets. The game’s market popularity in China as well as the pandemic’s far-reaching impact on the growth of esports have made CSGO skins insanely valuable.

Here are the 8 most expensive CSGO skins, according to real-world sales. With the market changing, skins even more valuable may start selling, especially to China, in the next year. 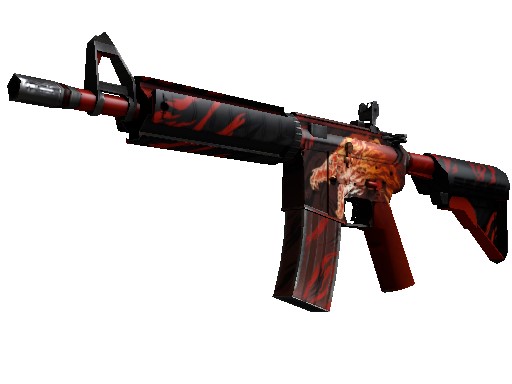 The M4A4 Howl with StatTrak enabled is an iconic CSGO rifle skin from the Huntsman collection. It may be a gun decked out in eye-catching raging flames and a fire-breathing monster, but that’s not why the gun is so rare. It launched as a pretty rare skin but became even more coveted after a scandal made it a CSGO legend.

Today, players who still have this legendary skin can sell it for $8,000 or more.

The skin was actually a custom user-created skin from the Steam workshop, which became so popular that Valve added the skin, then called “Howling Dawn,” and its custom sticker to the official game for the Huntsman Collection. The DeviantArt contributor named CanisAlbus discovered the gun in the game. Recognizing his own stolen artwork, he sent Valve a DMCA takedown notice.

Today, only people who had the guns at the time and kept them after they were removed from the game can resell them. 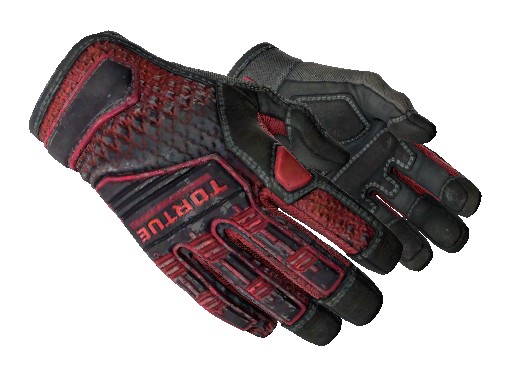 The Crimson Kimono Specialist Gloves in the Hydra Collection can garner as much as a handsome $10,000 from the skin market. They’re black gloves emblazoned with red patterned fabric. Though they appear on the market often, they are extremely rare in Factory New condition.

The Crimson Kimono Specialist Gloves’ flavor text says, “Start seeing red,” a reference not only to the gloves’ red diamond fabric pattern but also their popularity with knife-wielding stealth players. They were added to the CSGO catalog in November of 2016. 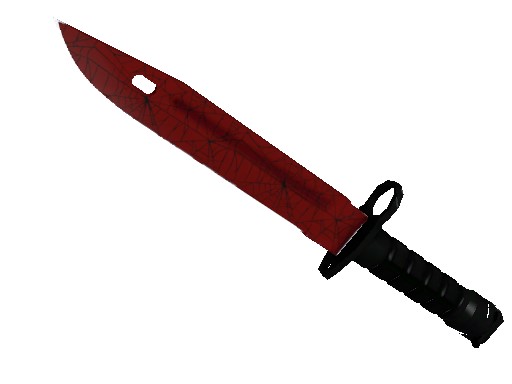 The M9 bayonet got its own skin variant at the dawn of CSGO skins. The intimidating blood-red blade of the StatTrak Bayonet Crimson Web knife quickly became one of the most coveted of all weapons, with not only the Covert weapon grade but all the benefits of value and rarity that the StatTrak technology provides as well.

Today in factory new condition, the Bayonet Crimson Web skin sells for $11,000. To add to the skin’s allure, the crimson web patterns are generated in random unique configurations on every skin.

Valve discontinued the StatTrak Bayonet Crimson Web skin in 2015, meaning that it no longer spawns organically in Arms Deal chests. This means that it can only be bought on the market, making factory new knives even rarer. 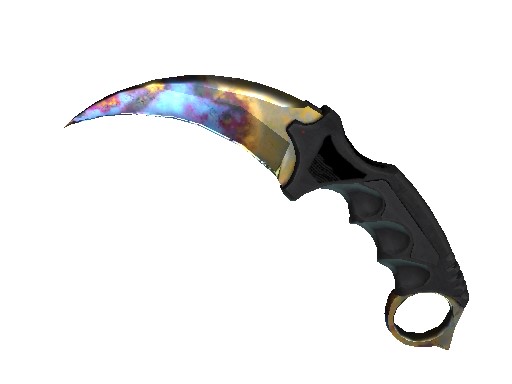 The Karambit Case Hardened knife is well-known as a coveted, unique skin in CSGO, in every color, condition, and variant. The value skyrockets when considering the Blue Gem variant, which spawns in an Arms Deal Chest at a less than one percent rate.

Since 2013, factory new versions of this skin have been highly prized, especially since each skin’s pattern is unique. Blue Gem variants in new condition can sell for $15,000.

The Karambit skin class is one of the most coveted in CSGO by default, just being a cool-looking knife that has become a symbol of player experience and skill. Even the less valuable, default Karambit skin colors and patterns frequently sell on the skin market for $1,000+. 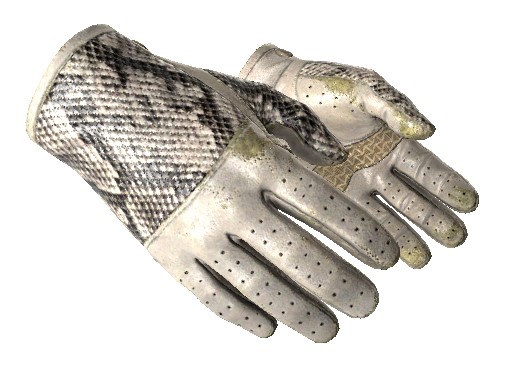 In 2018, the King Snake Driver Gloves dropped as part of the Clutch Collection. It would be an understatement to say that they were coveted. These gloves, sporting the tantalizing “extraordinary” item rating, can garner up to $20,000 when sold in factory new condition.

This makes them tied for the most expensive glove skins in CSGO, as you’ll see in a minute.

The Clutch Case contained a total of 17 weapon finishes designed by the CSGO community, none of which fetch very high prices. These gloves, which are one of 24 designs in the crate, are definitely the cream of the crop. You needed a Clutch Case Key to open the box and see your prize. 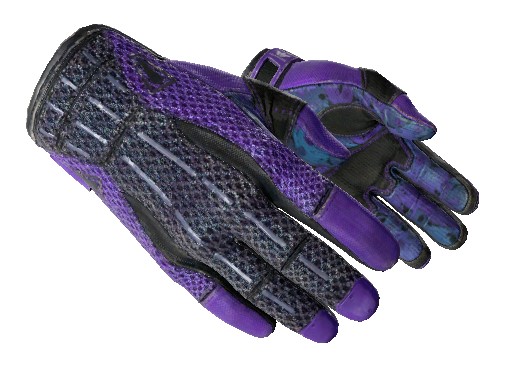 Not only are the Pandora’s Box Sport Gloves one of the rarest skins in CSGO, but they have the honor of being tied as the rarest glove skin in the game. Even in used condition, this skin can cost thousands of dollars. In factory new condition, it can fetch twenty grand on the open market.

Since 2016, these gloves have been eye-catchers with their unique purple weave and padded athletic glove pattern. We suggest the purple mesh and black texture overlay would be perfect for nervous bomb disposal experts.

Operation Hydra crates contained 24 possible unique gloves, as well as the highly coveted AWP Oni Taiji Sniper Rifle. If you could snag one with StatTrak enabled, you’d have a $1,000 skin as a little bonus. 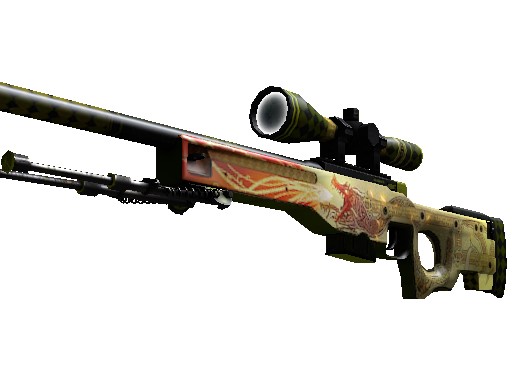 The Souvenir AWP Dragon Lore is a sniper rifle, which already makes it one of the most valuable skins in CSGO. You used to be able to organically acquire this gun in a Cobblestone case by watching players compete on its associated map. There was around a 1/250,000 chance of getting a Souvenir AWP Dragon Lore skin and even then, the condition would still be up in the air.

The issue now is that Cobblestone is no longer playable in pro circuits so you can’t farm this skin from the map’s boxes anymore. In other words, you can’t unlock it. You can only buy and trade it on the marketplace, which is why this skin now sells for around $30,000 in factory new condition.

Cobblestone was a bomb defusal map added to CSGO with the Winter Offensive update. It was notable for having a large vertical combat area that emphasized fall damage and sniping, adding to the allure of its signature skin, the Souvenir AWP. 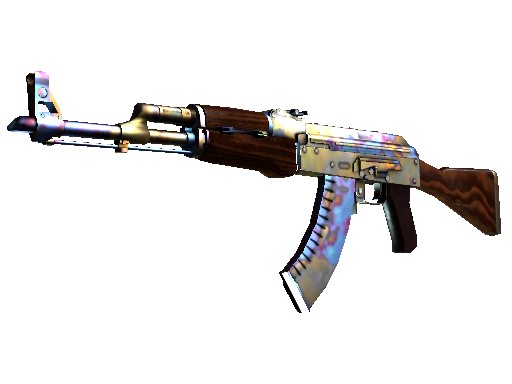 The most expensive CSGO skin is the StatTrak Case Hardened Ak-47. This skin was part of the Arms Deal Collection and is notable for its shiny blue casing, which signifies the skin’s rarity further. StatTrak technology, as mentioned previously in this list, tracks the kills of the individual weapon between owners. It can take even a gun that has minor wear and turn it into the most valuable skin in the game.

The gun had 4 Titan Katowice 2014 stickers, each high-value on their own, contributing to the gun’s final selling price of $150,000 through Steam.

The Ak-47 Case Hardened skin is about as old as CSGO, being part of its first weapon case and then in the Arms Deal Collection. Players loved the blue hue, so the gun just kept getting rarer. This final sale was so expensive that someone calling themselves a “skin middleman” oversaw the transaction to make sure it all went smoothly.

CSGO has become one of the reigning esports franchises in the world. That honor comes with a ludicrously valuable skins trading market, currently valued at around 5 billion dollars. The skin gambling community is showing no signs of slowing down, either, with the pandemic only raising people’s investment in the growing market capacity of CSGO’s insane cosmetics trading empire.

The worst thing about seeing these skins for long-time CSGO players is that many have found and traded them over the years, not predicting their meteoric rise in value. Who’s to say what next year’s most valuable skins will be? And who knows what they’ll be worth by then?