Garbage Pail Kids are perhaps one of the most controversial games of its time. These sticker trading cards released in 1985 were a parody of Cabbage Patch Kids, a popular line of cloth dolls.

Each character featured in the Garbage Pail Kids cards represented some sort of comical deformity and suffered a horrible fate or death.

The cards were vehemently criticized for the gross humor and grotesque images they represented. Many thought the humor depicted in their artworks was inappropriate for the children.

Despite all these negative feedbacks, Garbage Pail Kids managed to survive. In fact, soon after release, it was a smash hit and immensely popular among kids. 15 original series of regular cards were released in the US from 1985 to 1988. 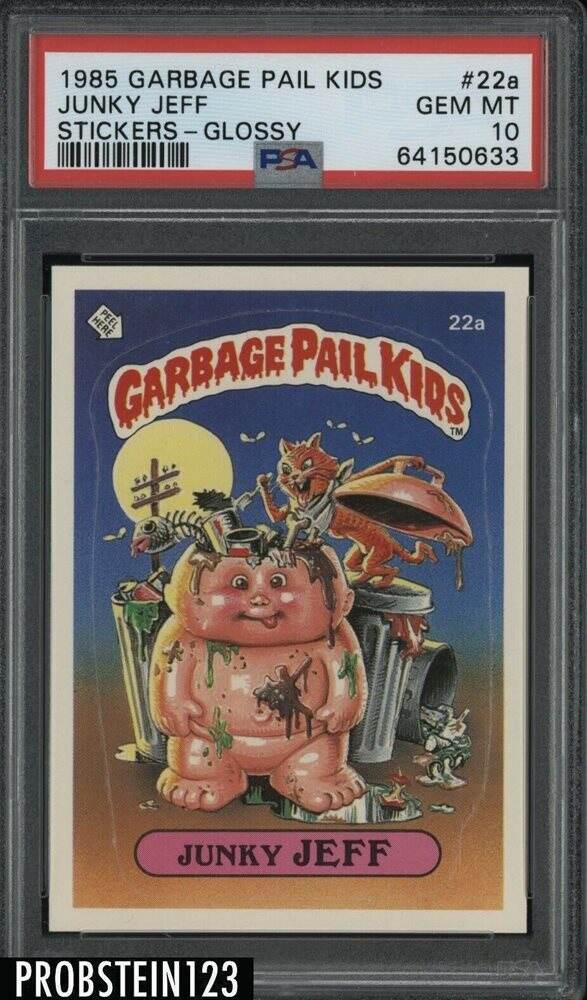 Junky Jeff card was a part of the first old series. It features a bare-bodied little boy covered with garbage. The boy depicted in the artwork is obese, and his head is cut off. The head spills junk and various gross object. An alley cat who holds a lid-like object in one hand raids his head.

The boy has an empty smile on his face. As a whole, the boy looks like a living garbage can.

Some believe the artwork tries to remind us how alley cats collect food from the garbage. However, the dominant notion is that the artwork mocks how the kid’s mind can be filled with garbage ideas and information.

Garbage Pail Kids cards were released in many other countries, including Japan, Australia, New Zealand, and several European countries. However, the name was different for each country. 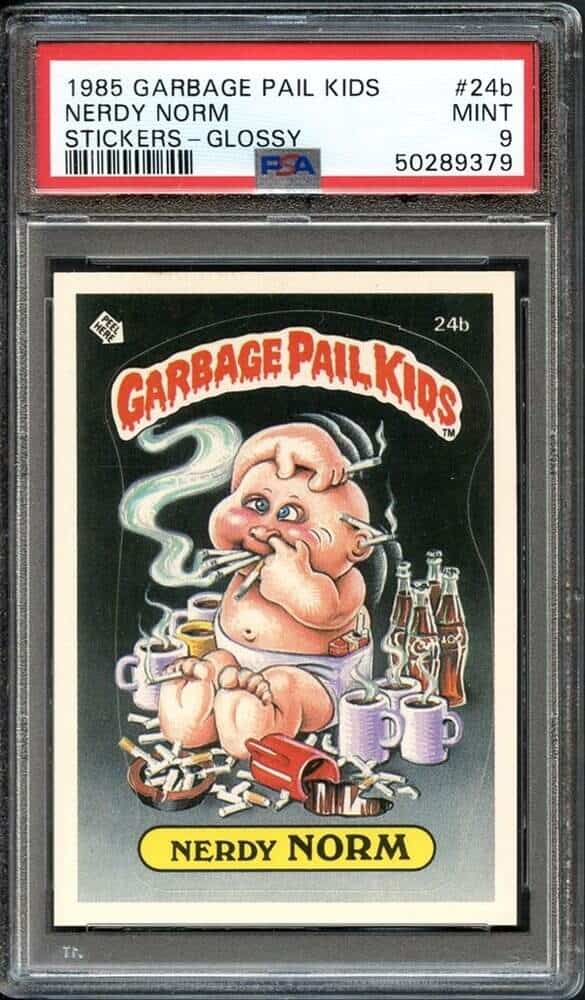 Nerdy Norm was one of the most criticized cards released as part of the original series (OS). Parents despised the artwork that depicted a bald kid smoking cigarettes and drinking.

The boy is wearing a diaper and holding a cigarette in one hand. The hand is rested on his head. With his other hand, he is picking up his nose. There are four cigarettes in his mouth, and two others jut out of his head and ear.

He is surrounded by coffee cups and coke bottles. An ashtray in front of him is full of cigarette butts.

The artwork probably tried to mock the way people handle their stress and anxiety. Cigarette smoking in the US reached the height of popularity in the 1980s and 90s. It was a reaction to that phenomenon.

Many schools in the US banned Garbage Pail cards. The official reason cited was that it distracted the students during class. 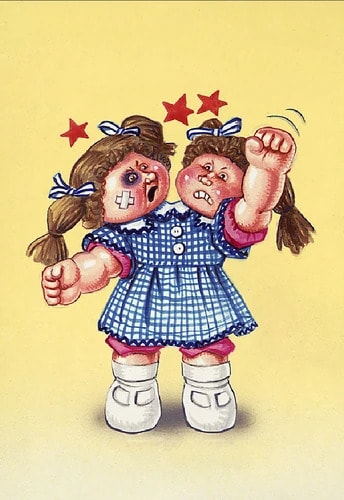 The artwork depicts an image of a young girl with two heads fighting with each other. Both faces show injury marks and look violent. The card makes fun of mental health disorders which is clear both from the image and the name.

The card was criticized for the right reasons and was very unpopular, especially among the parents.

In some prints, the name of the card was changed to Fran Fran, possibly because the developers realized the name was too over the top. 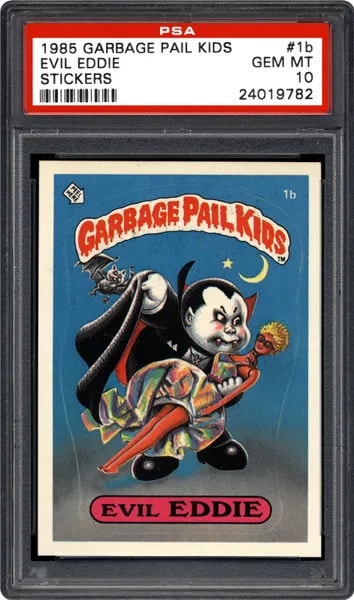 Evil Eddie is the number 1 card in old series 1. That is the reason why this card has been sold in such a high number

The card depicts a little vampire boy holding a barbie-like doll. The boy is clinging to her, ready to bite her neck. There is also a small bat who proudly watches the vampire kid.

The image is based on the character of Dracula by Bram Stoker, while the name is a reference to the Eddy, vampires that vanish and have a whirling move. It is clear from the artworks of the first series that the developers of Garbage Pail Cards were ready to do everything to counter the cute and cuddly image of Cabbage Patch kids. 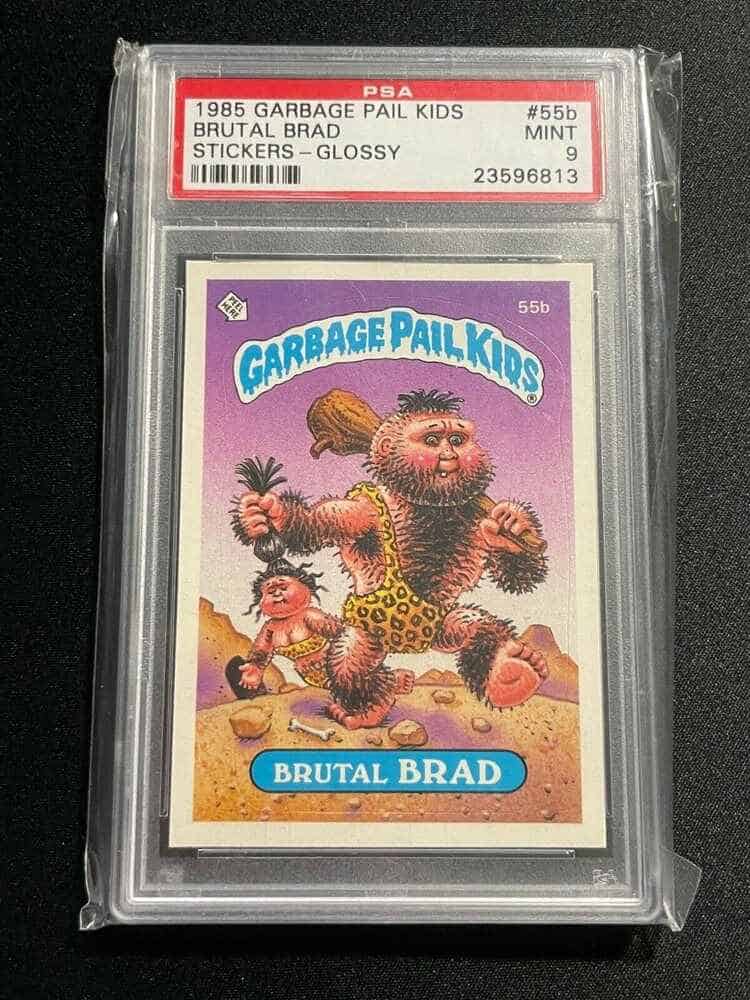 Brutal Brad was a part of the original second series. By this time, Garbage Pail Kid began to engage with some serious issues. The picture on the card depicts a hairy caveman in a leopard skin toga dragging a woman by a hair. He is also holding a club in his other hand.

The image may simply be a representation of the popular belief that cavemen used to hit their chosen partners and drag them by their hair. It can also be a reference to domestic violence. However, it is unclear if it endorses the violence or tries to mock it.

The counterpart of this card was named Hairy Garry, a character that appeared in the Garbage Pail Kids animated series Idaho Spud.

This card has a female counterpart named Brutal Bridget #56b. The imagery is almost the same, but the roles are reversed. In that card, a cave woman carries a weapon over her shoulder and drags a dead caveman with her other hand. 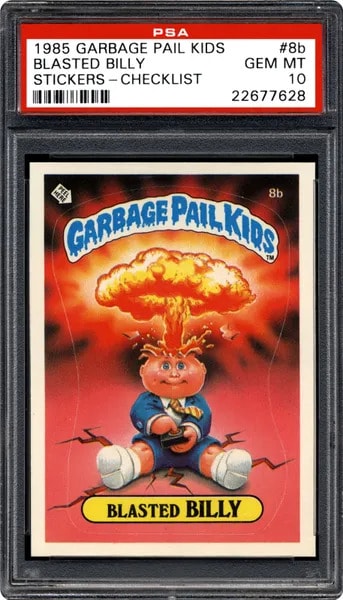 Blasted Billy was a part of the original series one. It is the counterpart of the most iconic Garbage Pail Kids character Adam Bomb. However, the character was never as popular as Adam.

Both Adam Bomb and Blasted Billy represent Cabbage Patch kids in a tuxedo. They are bald boys with blue eyes. They wear a blue coat, blue shorts, white boots, and a tie.

The artwork depicts the boy sitting on the floor and pressing a detonator box. It causes an explosion above his head and forms a mushroom cloud. It was a reference to the atom bomb that was being introduced at that time.

When the artwork on the “a” and “b” Garbage Pail Cards was always the same, the variations were usually depicted on the reverse of the cards. Some of them had checklists on the back, and others carried announcements of mock awards. 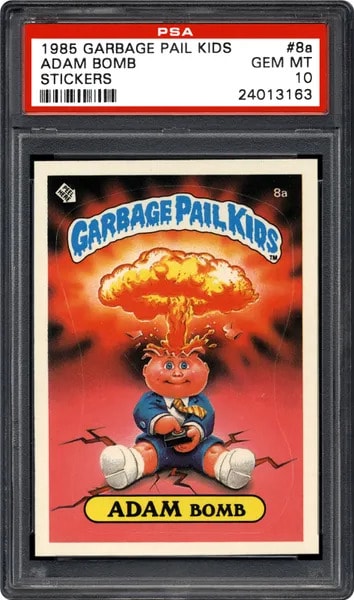 Adam Bomb was the most popular character in Garbage Pail Kids. The artwork is the same as the Blasted Billy. The name Adam Bomb is a direct reference to the Atom bomb. Adam Bomb became so popular mainly because this character was featured on the cardboard boxes and wrappers of the Garbage Pail Kids cards for the first five series.

The card is not only the second most expensive on this list, but the cumulative sales value is also considerably higher for this card. It is also one of the highest sold cards of Garbage Pail Kids. The card was sold for $7,643 on June 2, 2022. Previously, the highest price for this card was $7,500.

The Adam Bomb card was reprinted in All New Series 1. Several variations of this card appeared in the Flashback series. The character was also honored in the Trash Can Trolls series. However, despite all the fame, this popular character was absent in the Garbage Pail Kids Movie. 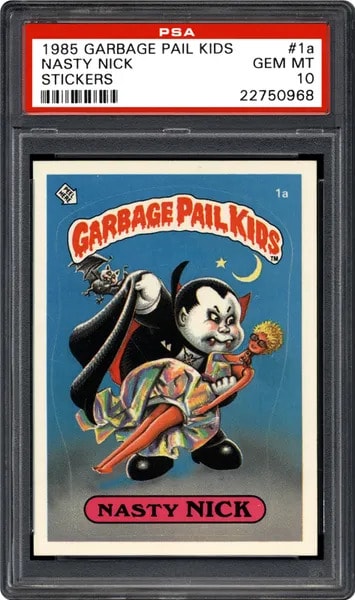 Nasty Nick is the most expensive Garbage Pail card ever sold in an auction. This card fetched a hefty amount of $19,000 in an auction held on October 28, 2020.

The card resembles the design of Evil Eddie but is far more popular than its counterpart. It is probably because this card holds the 1a number and is thus considered the first Garbage Pails Kids card ever produced. The name is a reference to the phrase ‘what a nasty nick’.

Garbage Pail Kids were invented by famous cartoonist Art Spiegelman who later won a Pulitzer Prize in 1992 for his holocaust graphic novel Maus.

8 Most Expensive Resorts in the World