14 Most Expensive Dale Earnhardt Collectibles Ever

Dale Earnhardt is one of the most famous NASCAR drivers in the last few decades. He has won numerous championships, and Chase Elliot is following in his footsteps to become an instant legend after winning at Daytona.

His legacy is more than just racing. It’s a legacy of cars, memorabilia, and collectibles. They are known for their high prices due to their rarity and unique designs, fans always want the original die-cast vehicles no matter the year or model numbers. 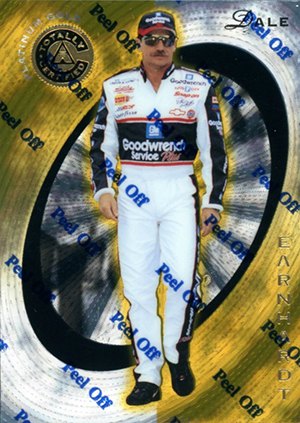 Low-numbered parallels became more prevalent in the late 1990s. One of the main objectives for many Dale Earnhardt collectors is the 1997 Pinnacle Totally Certified Gold. The chaotic etched foil pattern, which is numbered 49, feels ideal for racing.

Tin foil with gold and silver gradients was used to create the Pinnacle Totally Certified Gold Card. It has a full-frame picture of Dale Earnhardt Sr. wearing a black face hat, sunglasses, and a Goodwrench racing outfit. Around the wheel is inscribed the phrase “Peel-Off.”

Although this Dale Earnhardt collectible card is uncommon, its design prevents it from placing importance. 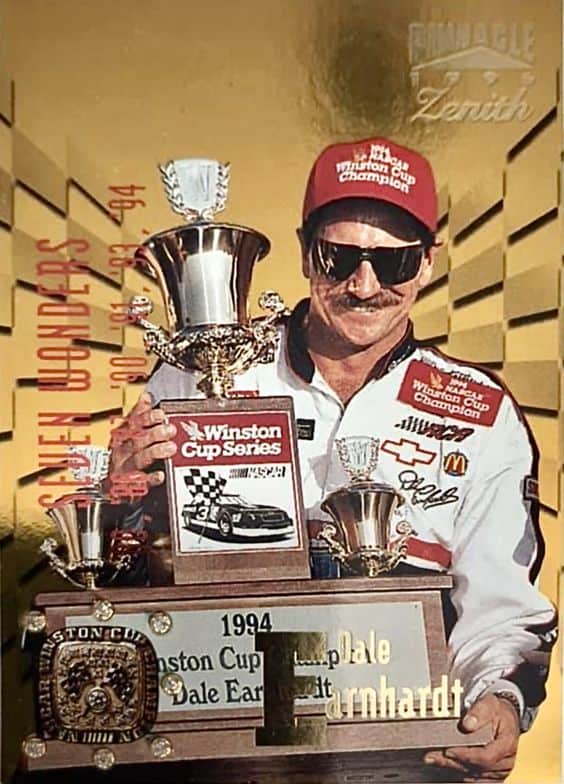 It is hand-numbered out of 94 on the reverse, inserted 1:6,025 packets, and extremely elusive. This card commemorates Earnhardt’s record-tying seventh Winston Cup victory. 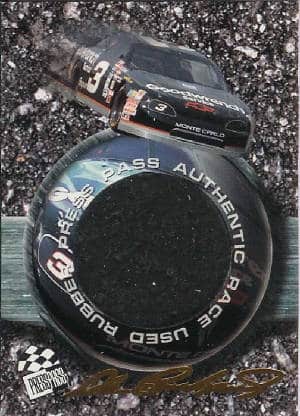 Because it was the first card to feature memorabilia, the Press Pass Burning Rubber Dale Earnhardt Race-Used Tire card served as the catalyst for the Dale Earnhardt card collection. Prior to its creation, signed cards were the most expensive.

All the cards have numbers between 1 – 500 and come in 1:480 packs. The picture on the cover depicts Earnhardt Srvehicle .’s flying over a huge rubber tire with the words, “Press Pass Authentic Race Used Rubber 3.”

One of the most groundbreaking inserts ever produced for the hobby is the 1996 Press Pass Burning Rubber. 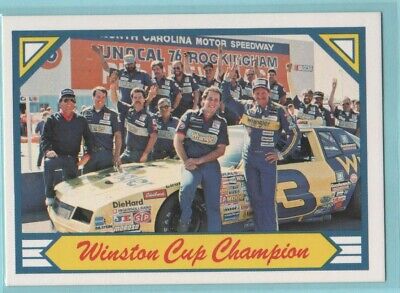 MAXX made its debut in 1988 and contributed to the mainstreaming of racing cards. Although there are numerous Dale Earnhardt cards in the collection, his automobile is featured on most of them. But on the 1988 MAXX Charlotte Dale Earnhardt #87 Winston Cup Champion card, the illustrious racer is seen with his crew.

Even though Earnhardt’s name isn’t on the front, it is obvious that this is a Dale Earnhardt card. 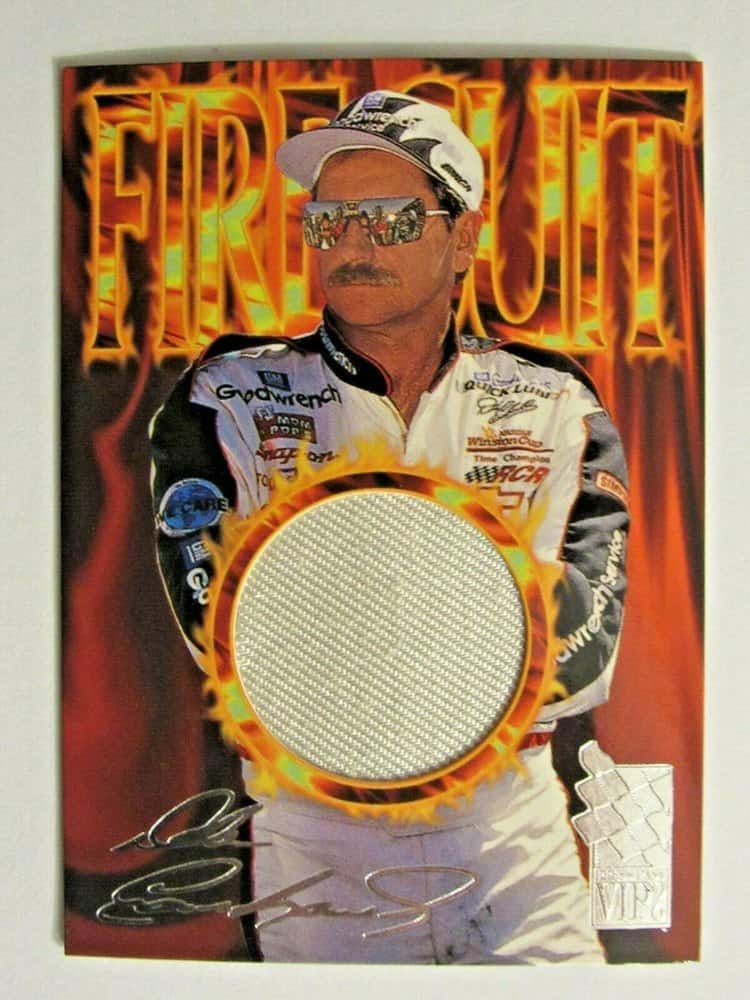 This card features Earnhardt rather than merely his car, in contrast to the Burning Rubber memento cards. 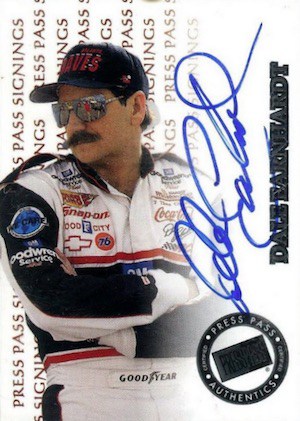 There are also 400 examples of the Dale Earnhardt signature card. There is a 100-piece limited edition gold ink variation of this card available for a steep premium. 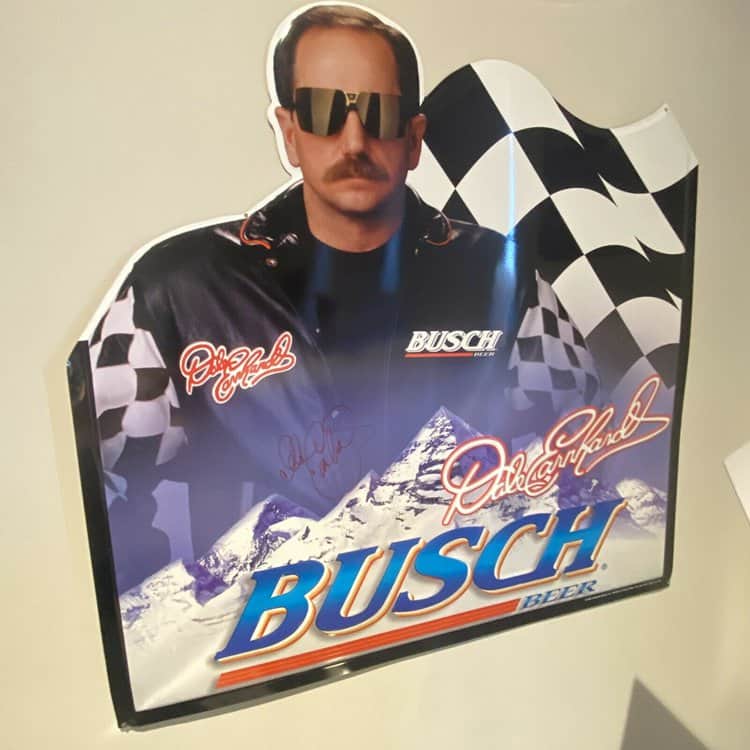 Over the snow mountain in the lower right corner, there is a signature. The highest and final bid for this metal sign was 30 US dollars. 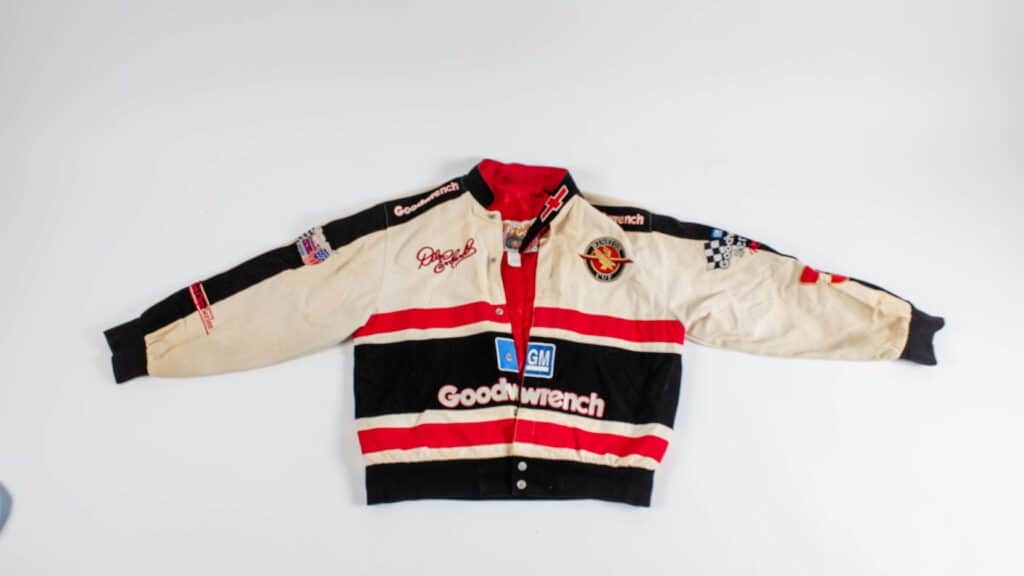 In the 1990s, Dale Earnhardt autographed this Goodwrench Winston Cup Jacket at the Dutchess County Fair. White serves as the backdrop, while black and red serve as the ornaments. “Winston Cup” is stitched on the left arm. 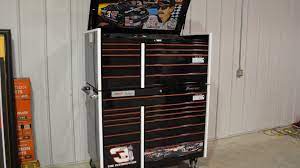 The Snap-on Dale Earnhardt Tool Box is a limited-edition item. It is weather-resistant, and it also has a lock included and a ball-bearing drawer slide. This toolbox is a type of tool chest that is color black and has 24 drawers. The highest price of this toolbox in the market is 8,500 US dollars.

High-security tubular locks on the toolbox have a limited keyway that can be readily keyed similar to other tool storage accessories.

Additionally, it includes a reinforced 14 gauge bottom channel double wall construction with corner gussets for an upper structural base and added strength and stiffness. 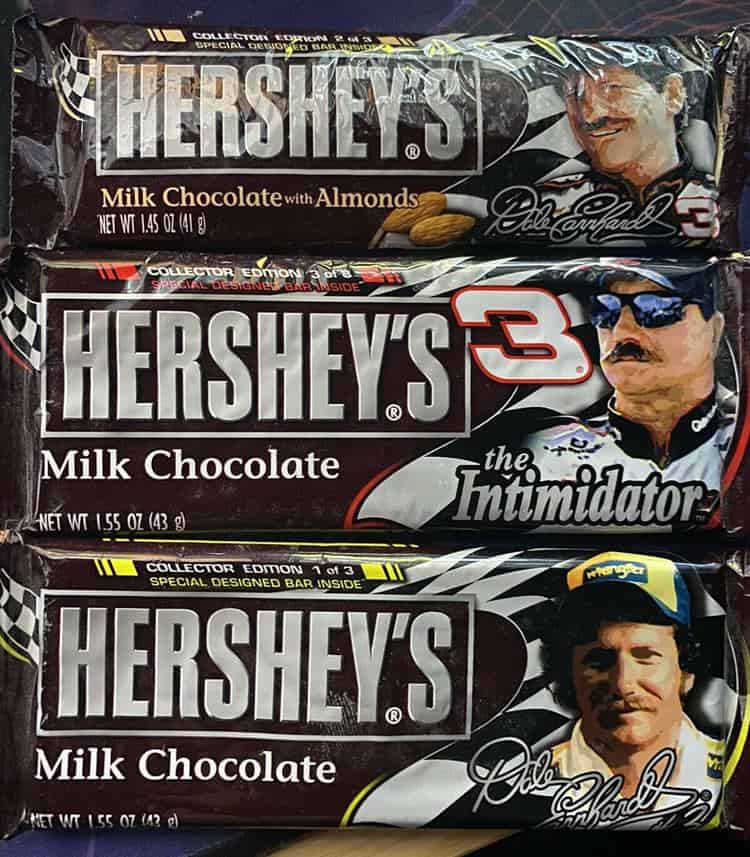 The Dale Earnhardt Hershey’s Chocolate Bar has long gone past its expiration date, therefore it should not be consumed. The pinnacle of racing memorabilia is represented by these chocolate bars.

There are three existing limited edition series of this chocolate bar. Fans can still appreciate owning them as keepsakes because they are limited edition.

The candy bars will include a picture of the No. 3 Chevrolet that Earnhardt raced to victory in the 1998 Daytona 500 as well as Earnhardt’s autograph. They have never been opened and have been frozen since 2007. 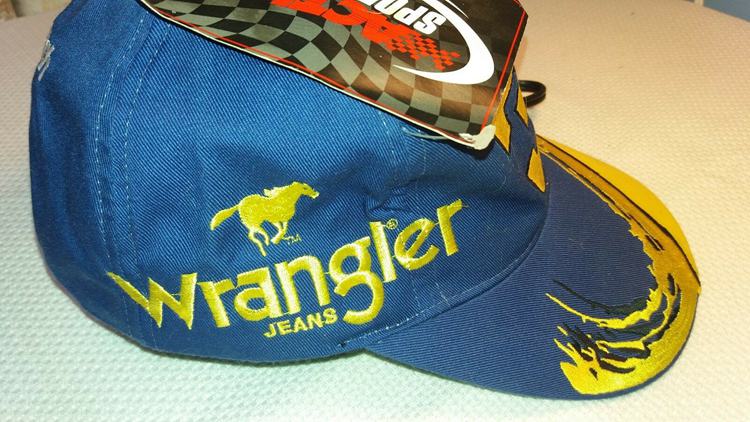 Dale Earnhardt’s name and the number 3 are embroidered in yellow on the front of this Vintage NASCAR Face Cap. Good Wrench Service Plus and Wrangler Jeans sponsored this hat.

With a Chase Snapback for adjustment, it is one size that fits most. This face cap was manufactured in Taiwan by the Chase brand. 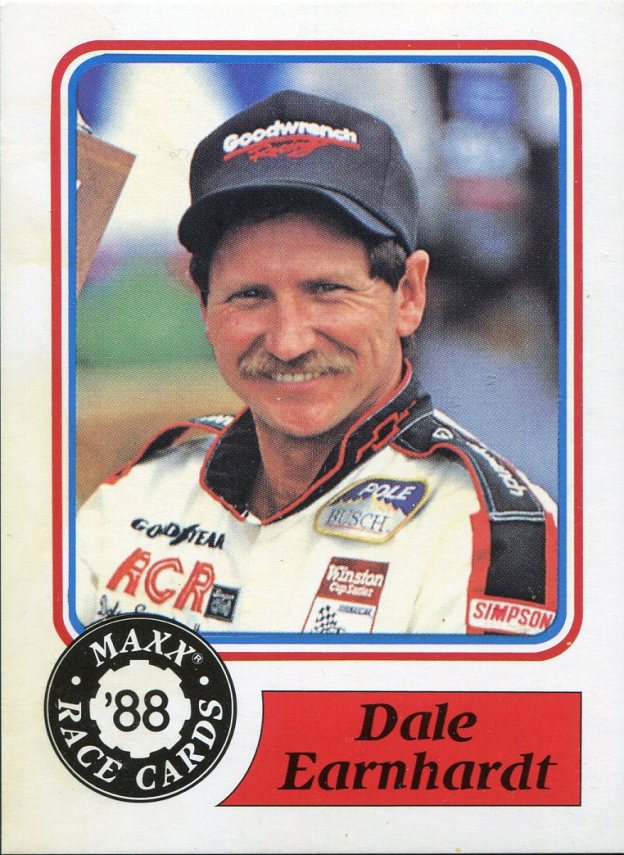 MAXX Charlotte Dale Earnhardt’s #99 card’s intriguing history makes it popular among players. Dale and MAXX disputed over the pricing, which led to the latter withholding it from a sale. It did, however, get into the general market through bootlegging and rose to fame as an unreleased product.

Later, in 1994, MAXX did issue a few copies through redemption. A gold sticker that is placed on the front of each serves as a serial number. One hundred numbered signed buybacks were made available by Upper Deck in 1997.

There is a fake version of this card that misspell Earnhardt’s hometown of Kannapolis, which is written “Kannapolis” so collectors should be aware. 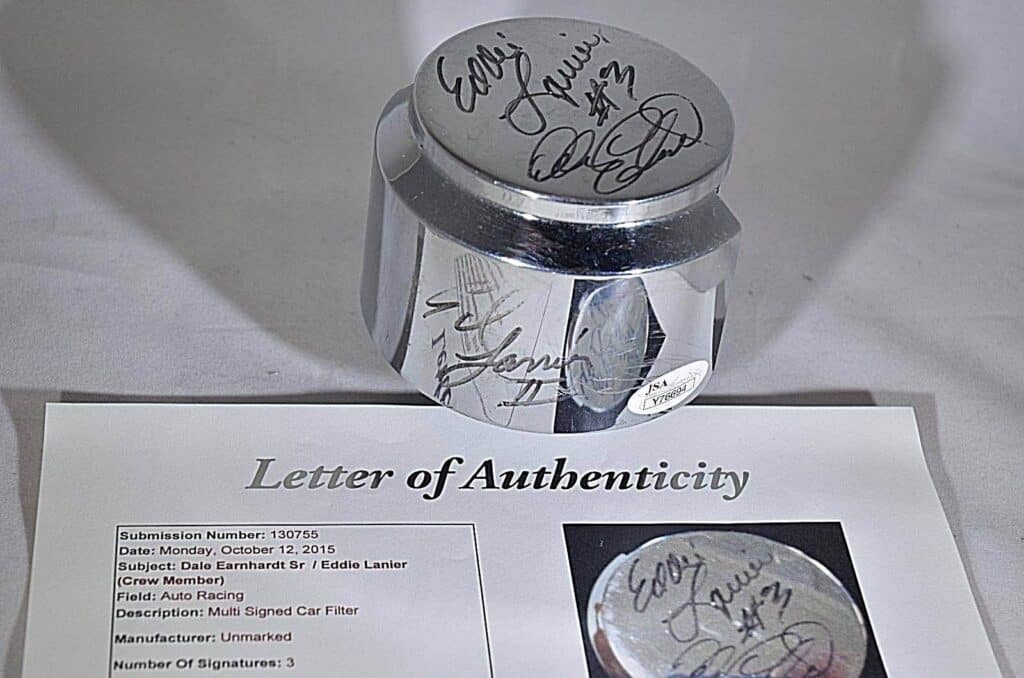 All three signatures of Dale Earnhardt have been verified and filed online with John Spence.

According to history, they created the appendages following the spectacular Talladega victory in 1990, which served as atonement for Earnhardt’s humiliating Daytona defeat the year before by only two points. 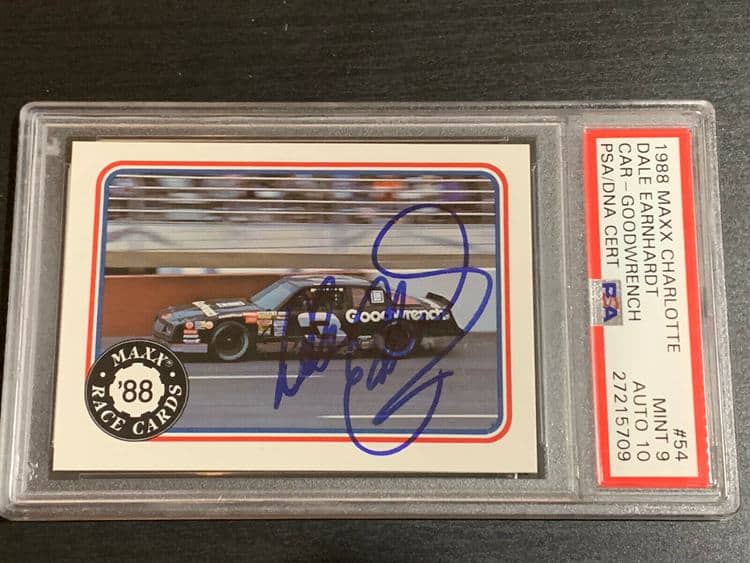 “The Intimidator” is described on eBay as a once-in-a-lifetime treasure for aficionados.

On the other hand, a letter from GM Goodwrench announces that Chevy will now be painted in the new colors of Black and Silver rather than the Wrangler yellow and blue. Because this specific edition was previously owned, it’s possible that this had a big impact on its worth.

Due to the maneuvers, his vehicles made that other drivers wouldn’t dare, Dale Earnhardt acquired the moniker “The Intimidator.” It is encased in a plastic film for protection, and a second flap on top of the card lists all of its information.

12 Most Expensive Suits You Can Buy