10 Rarest and Most Expensive Topps Baseball Cards Ever

Topps is the leading producer of American football, baseball, basketball, ice hockey, soccer, and other sports and non-sports themed trading cards. In 1952, Topps debut its very first baseball cards and they are among the hobby’s most valuable pieces. The rarest Topps cards are worth hundreds, even millions of dollars today and this list contains some of the rarest/most valuable Topps baseball cards ever. Even in subpar conditions, the rare cards on this list are worth money, so if you have any of these cards, it’s a good idea to get them professionally graded.

As of July 2021, the information on this list is as accurate as possible and will be updated as needed. 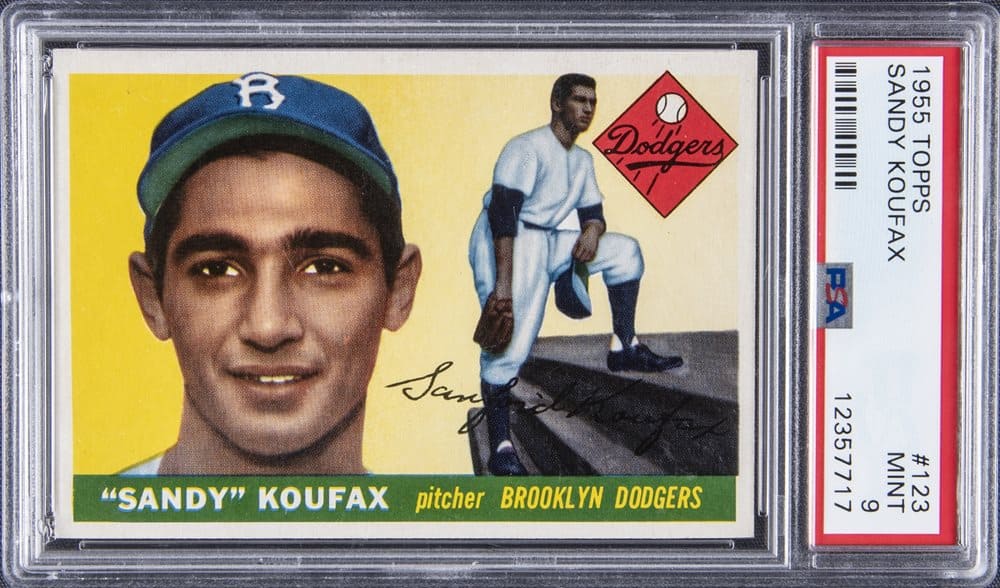 The 1955 Topps #123 Sandy Koufax rookie card is the player’s most valuable and collectible card. While there are nearly 9,000 known copies of Koufax’s rookie card, there are only about two dozen cards in mint condition. These mint condition copies are typically worth a few ten thousand dollars, but the some have sold in the lower hundred thousands. In 2021, Goldin Auctions sold a PSA Mint 9 copy of the Topps #123 Sandy Koufax card for $369,000.

Although the 1955 Topps #123 Sandy Koufax card is the most popular Koufax card, many copies do have print defects such as subpar centering and issues that are highly visible on the card’s light-yellow background. 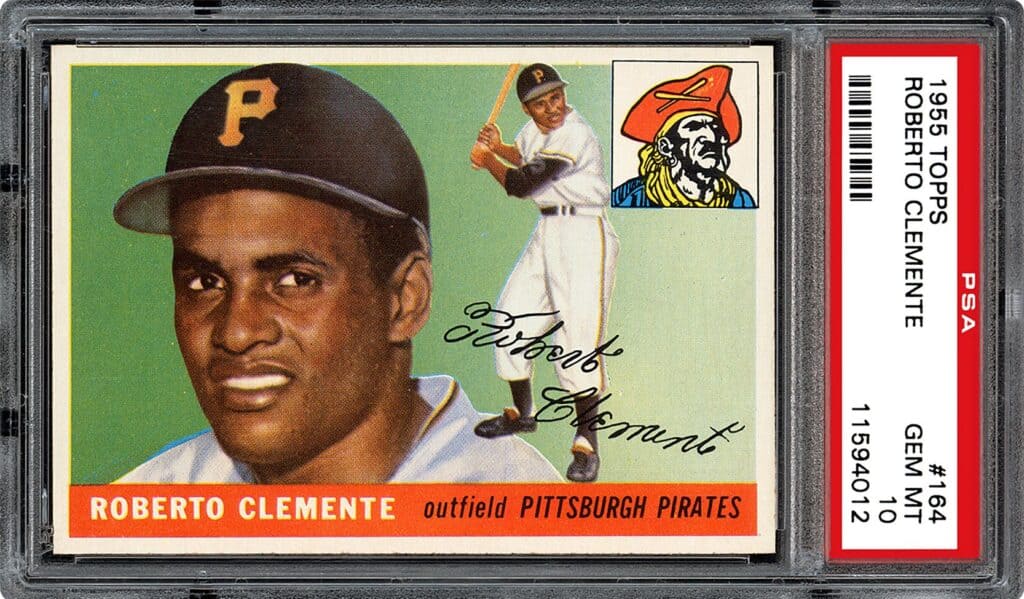 The 1955 Topps baseball card set is considered by many baseball card collectors to be one the best Topps sets ever produced. One of the shining jewels of that collection is the #167 Roberto Clemente rookie card. Finding high grades of the Celemente’s rookie card is difficult and there is only one known example with a grade of PSA Mint 10. This card has not been seen since it was last sold in 2012.

In 1973, Roberto Clemente became the first Caribbean and the first Latino-American player to be enshrined in the National Baseball Hall of Fame. 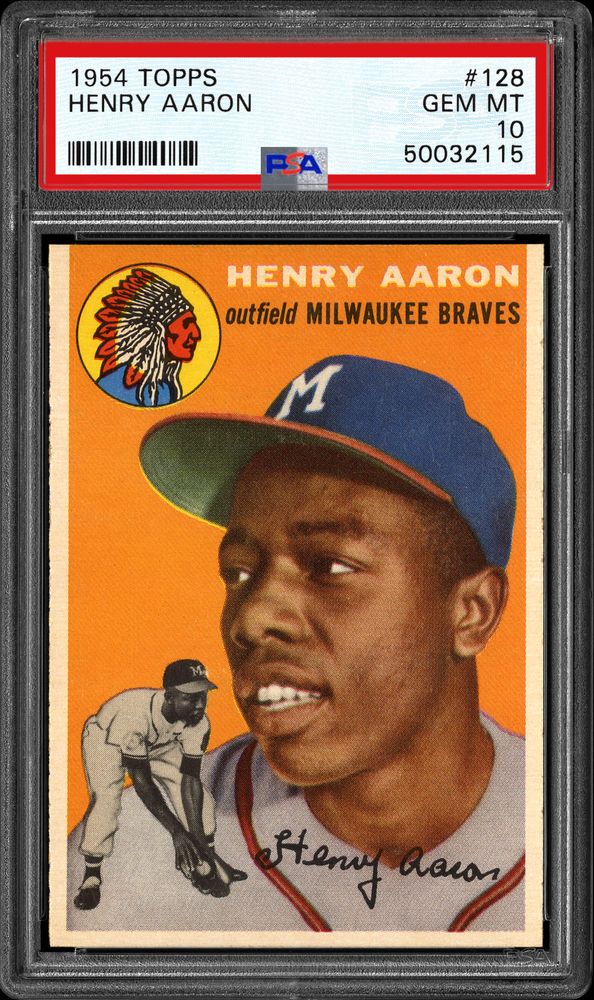 While the Topps 1954 #128 Hank Aaron may not be the rarest or most valuable baseball card out there, it is one of the most recognized sports cards ever and is symbolic of the card collecting hobby. 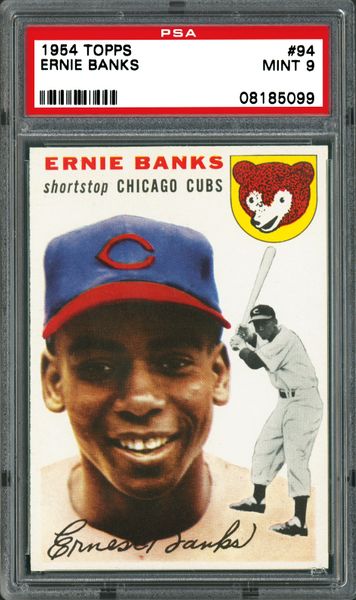 The Topps 1954 #94 Ernie Banks card is Banks’ rookie card, making it the most valuable and popular Banks card. One of the most striking things about Banks’ rookie card is how young he looks in the headshot. Banks’ had made his professional baseball debut in 1953 at the age of 17.

Hank Aaron and Al Kaline also had their rookie cards released in the 1954 Topps set and along with #94 Ernie Banks, they are the most valuable cards in that year’s collection. 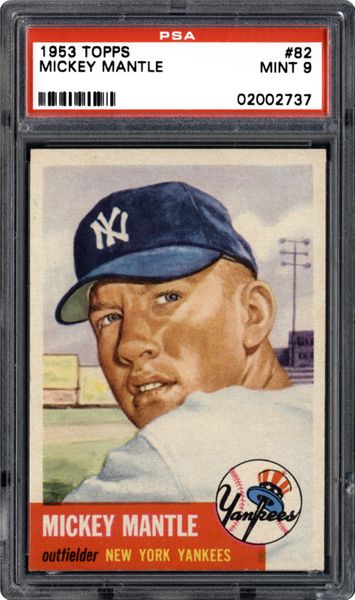 Many baseball card collectors consider the 1953 #82 Mickey Mantle to be Mantle’s most beautiful card because it features a closeup of his face. Other collectors argue that this closeup is actually detrimental to the card’s value because there are often noticeable print errors on Mantle’s face. Additionally, the red bottom border on the #82 Mickey Mantle is often scuffed up. This issues have made it difficult to find a mint condition #82 Mickey Mantle. When higher grade Topps #82 Mickey Mantle cards do come up, they sell for a few hundred thousand dollars. 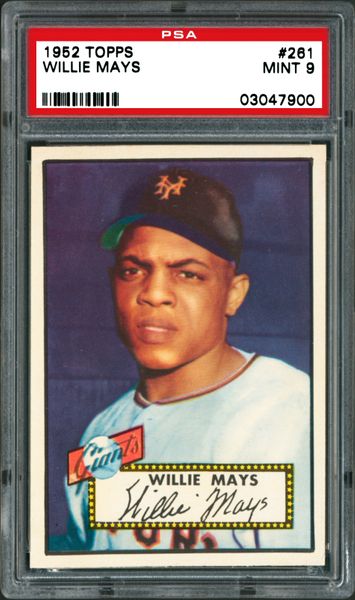 Lower grades of the 1953 #211 Willie Mays cards sell for a few thousand, while the highest conditions sell for a couple hundred thousand. In 2016, a PSA Mint 9 copy of the #211 Willie Mays card was sold by Heritage Auctions for $478,000. The card was part of Heritage Auctions’ Sports Collectibles Catalog Auction, which earned more than $11 million total.

Many people think that the Topps 1953 #261 Willie Mays was the player’s rookie card. Mays’ rookie card was actually released the year before by Bowman. 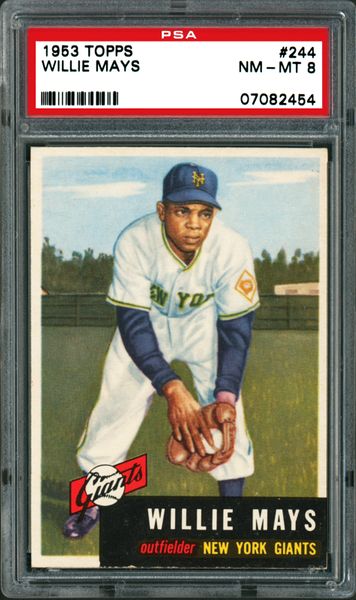 The 1953 Topps #244 Willie Mays card is considered the rarest from that year’s baseball card set. Reportedly it had a short print run and existing copies are in poor condition because the bottom edge of the black rectangle with Mays’ name is often worn out. However, a PSA Mint 9 Topps #344 Willie Mays card was sold for $132,000 in 2017.

Interestingly, Mays did not play baseball during the 1953 season because he was drafted into the U.S. Army to serve in the Korean War. Mays had only played in 34 games in 1952, but was popular enough for Topps to feature him on a card.

The 1953 Topps #244 Willie Mays card is one of the player’s most popular cards and features Mays’ iconic “basket catch” fielding pose. 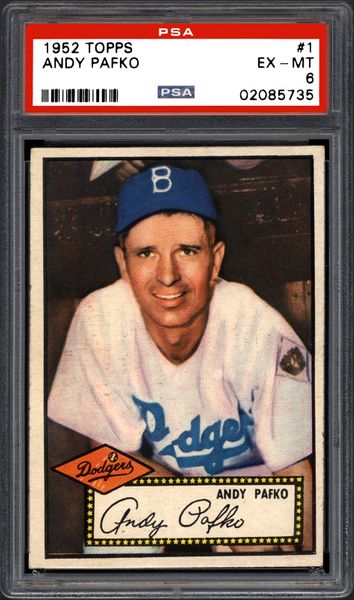 Although Andy Pafko was not a star baseball player, in the years following his retirement in 1959, he has become quite legendary amongst baseball card collectors. This is because Pafko is the player featured on the very first baseball card that Topps produced in 1952. Because the 1952 #1 Andy Pafko card was the first in the set, kids put it on the very top of their collection. At the time it was popular to keep a stack of baseball cards together with a rubber band. While this was a very practical idea, it caused severe damage to most Andy Pafko cards. 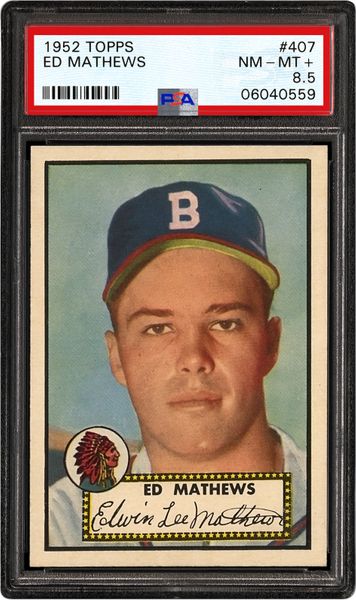 The 1952 Topps #407 Eddie Mathews is the second most valuable card, behind the #311 Mickey Mantle, from Topps’ first set of baseball cards. Like the Mickey Mantle card, Eddie Mathews rookie card was a higher number in the set, in fact Mathews was the very last card, which meant that it a lower production number. Since Eddie Mathews was the last card in the set, most existing cards are in rough condition because kids/collectors often stacked their cards with the last card on the bottom. Topps #407 Eddie Mathews cards in poor condition are only worth a few thousand, but mint condition cards have an estimated value of about $250,000.

Not only are existing 1952 Topps #407 Eddie Mathews cards pretty beat up, many of the cards are off-center, with Mathews’ picture skewed to one side. 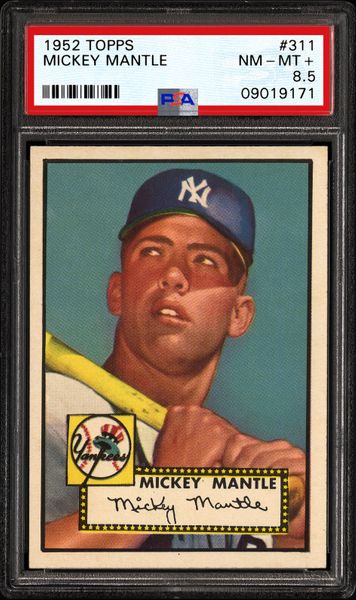 1952 was the first year that Topps released the modern baseball card and higher numbered cards from the series, like #311 Mickey Mantle, had a smaller print run. This has added to the cards’ rarity and appeal to baseball card collectors. Topps #311 Mickey Mantle cards in lower conditions can still fetch tens of thousands of dollars.

The 1952 Topps #311 Mickey Mantle purchased by Rob Gough was last sold in 2018 by former NFL Super Bowl champion Evan Mathis to an anonymous buyer for $2.8 million.

10 of the Rarest Phobias in the World