CS:GO started as just Counter-Strike. This early version was developed by Minh Le and Jess Cliffe in the late 90s, but it eventually caught the interest of gaming company Valve in the year 2000. Valve knew there was something special about Counter-Strike, so the company helped release the first non-beta version for PC.

Over the years, Counter-Strike saw a lot of success and a few variations — but the game started to look dated.

Finally, Valve decided to reinvent their famous FPS. In 2010, the company developed the iconic Counter-Strike: Global Offensive, a new and improved edition that was released two years later.

With years of popularity, CS:GO has seen some wild skins and expensive objects — including a lot of expensive knives. Here are the top 10 most expensive CS:GO knives. 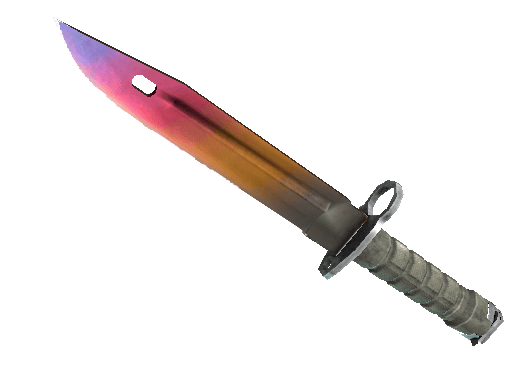 Selling for over $400, the Bayonet | Fade marks an expensive start to the world of high-priced CS:GO blades — but it’s nowhere near as costly as other knives on this list.

The knife’s gradient design was created by coating the chromed blade with translucent paints. Interestingly, the handle is unpainted — which might be a helpful feature when it comes to the wear and tear of combat.

This is the first of many knives on this list that debuted with The Arms Deal update. This big change to CS:GO was the start of many exciting changes that secured the game’s popularity for years. 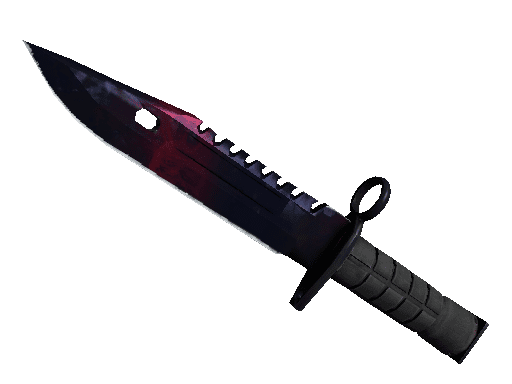 This blade has a flavor text that reads getting lost in its color can prove fatal — and it’s not hard to see why. With a slick candy coating and swirling, marble-like details, this sharp knife is easy to stare at. But don’t look too long, that blade is sharp.

The M9 Bayonet debuted in 2015 with the Full Spectrum update. Beyond this blade, the update featured gameplay adjustments and the Chroma Case.

Today, the M9 goes for well over $500, making it one of the most expensive CS:GO knives.

Interestingly, the M9 Bayonet has been anodized. In the real world, the process of anodizing involves changing the oxide levels on the surface of a metal object to give it the appearance of color variation. 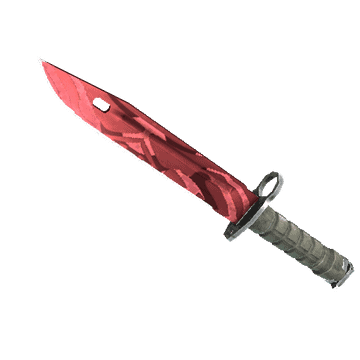 With a name like Slaughter, you know this knife is deadly. The blade features a coating of red translucent paint and an abstract design created with aluminum and chrome paint.

The Slaughter is available in over 10 cases that were released between 2013 and 2015, but that availability hasn’t stopped prices from climbing. Recently, the blade was available for over $600 — but depending on the rarity of the skin, these knives can go for even more.

This knife debuted in 2013 along with The Arms Deal update. Although the blade was very popular after its release, one report says the knife is less popular today. 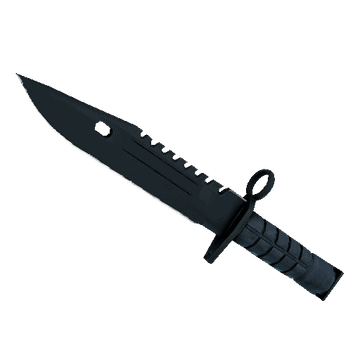 The M9 Bayonet | Night isn’t the most flashy blade, and that’s probably why it’s so deadly. The knife resembles the night sky, with a sleek design and deep blue paint — making the blade easy to conceal before an attack.

According to one report, the M9 Bayonet | Night was really popular when it was released in 2013, but it’s recently decreased in popularity. However, the blade still sells for a staggering $847.20 in new condition.

Like other knives on this list, this weapon was released with The Arms Deal update. The 2013 release included over 100 new weapon skins and two new stock weapons.

Price: $859
Design: Marbleized
Interesting Fact: Originally made to be mounted on a rifle
Year Added: 2016 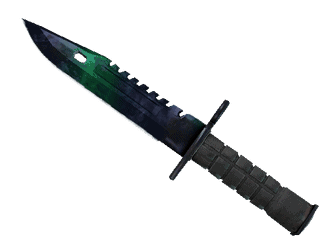 This knife came out in 2016 when the Gamma Exposure update dropped. With a price of nearly $900, the M9 Bayonet | Gamma Doppler features a unique, smoky marble look.

Debuting alongside the Gamma Exposure update, this knife is pretty popular among gamers — but it’s also very expensive, so it’s not often found during gameplay.

Beyond the this sharp knife, the Gamma Exposure update also marked a series of changes to CS:GO’s sound system. The changes were designed to improve general sound quality, but it was also meant to reduce “ear fatigue” reported by players. 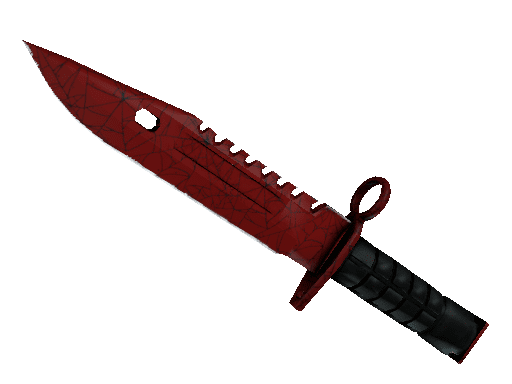 The unique blade, which debuted in 2013, features a spider web design on a red base coat. Next, a layer of semi-gloss covers the whole thing for a light shine.

This knife wasn’t the only exciting change brought by The Arms Deal update. The 2013 release also brought eSports to the world of CS:GO — with new systems to pool prizes for competitive gameplay.

The Stiletto Knife | Crimson Web looks really cool, but the price might be a drawback. The blade goes for nearly $1,600 — making it one of the most expensive ever produced.

This knife debuted alongside CS:GO’s A New Horizon update. The update was released in 2018 and featured a revamped user interface aimed at making the game’s overall appearance more modern. 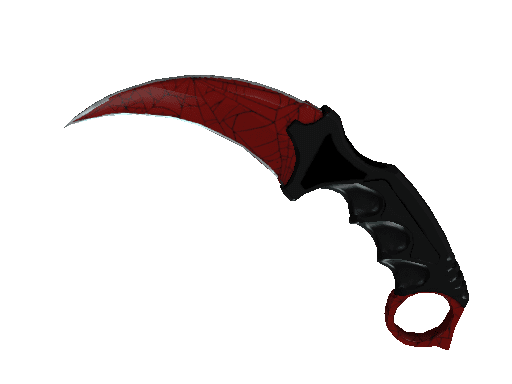 This is another knife that features the Crimson Web design, but this time the blade is curved. The knife also features deep grooves in the handle for a tight grip and a deadly sharp edge.

That curved blade is probably the knife’s most exciting feature though. Known as “the Karambit,” these blades are extremely rare.

Interestingly, the price of this knife also drops significantly depending on its condition. If buyers are willing to go for a copy in just slightly worse condition than “Minimal Wear,” they can expect to save about $1,100 — not a bad deal.

This is yet another knife that debuted with The Arms Deal update. The update was evidently a successful change to the CS:GO world: According to one report, the number of active players skyrocketed after the 2013 release. 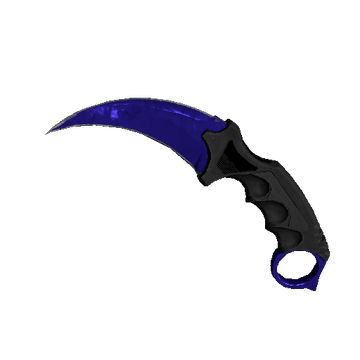 Prices jump with the Karambit | Doppler Sapphire. With an incredible cost of $15,128.90, gamers could buy about 30 Bayonet | Fades for the same price.

The blade, which debuted in 2015, does look pretty cool though. The design includes metallic paint with wavy lines and a vibrant purple hue as well as that iconic curved blade. Like other Karambit knives, the Doppler Sapphire includes a well-designed grip.

When this knife came out, CS:GO also got Chroma Cases. These cases included a variety of community-designed weapon skins and six knife finishes — including the Doppler finish. 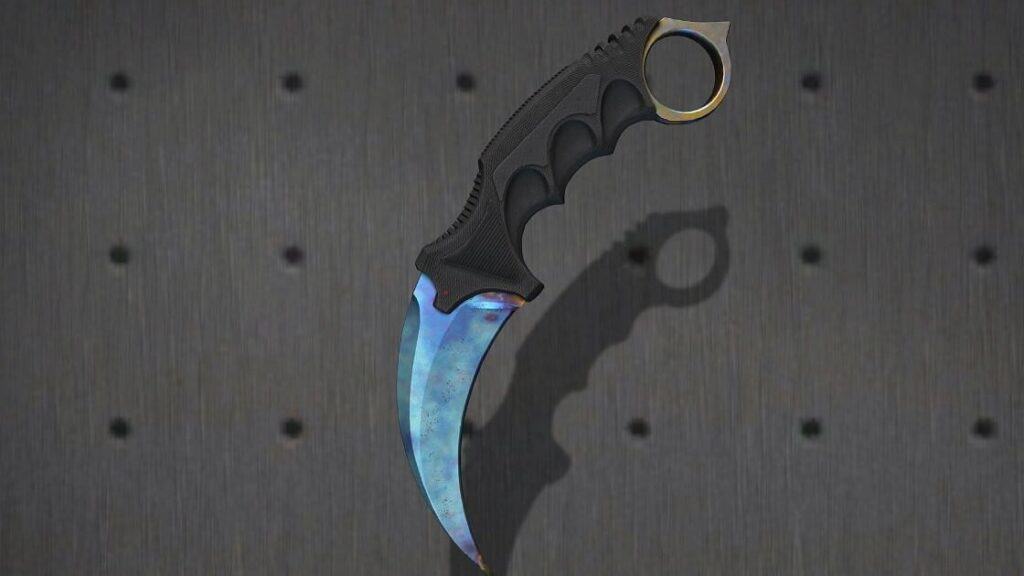 Karambit Case Hardened is the most expensive CS:GO knife.

With a reported price of over $1.4 million, the Karambit Case Hardened is by far the most expensive knife on CS:GO. The incredibly expensive blade follows the classic Karambit design, but there isn’t much else special about the blade except how rare it is.

Reports of the rare knife’s price came from ohnePixel, a famous CS:GO YouTuber and trader who apparently served as a middleman for the expensive transaction.

Interestingly, the original owner of this knife was once reportedly offered about $1.3 million for the blade — but they said that offer was “low.”