Baseball has been around for almost 200 years, though its exact origins remain a bit unknown. Most believe it began in New York in 1839, though similar games had already existed for decades. But it wasn’t until 1903 that Major League Baseball was created, ushering in the modern version of the sport.

Today, it is a 30-team mega-profitable worldwide phenomenon, particularly popular in the United States and Japan. The trading cards associated with the game, spearheaded by the company Topps but including other brands as well, are highly valued collector’s items, especially on the high-end. Today, we’re talking about the most expensive baseball cards ever sold. 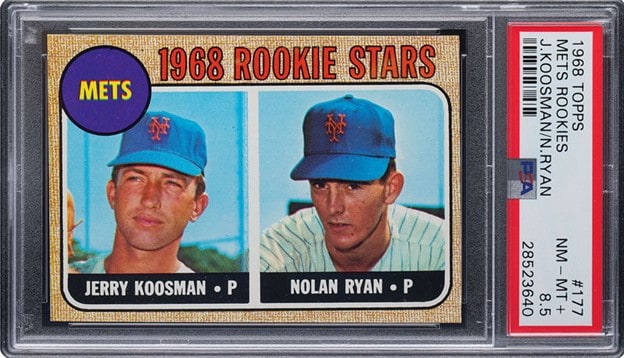 Nolan Ryan was a power pitcher who played for four teams over a career that spanned from 1967 to 1993, making him one of the longest-running pitchers around. Despite this span of time, he only played on a World Series champion team once when he played for the Mets in 1969.

Ryan shares this card with Jerry Koosman, who was also a pitcher for the New York Mets and had 222 wins of his own. He had a shorter career compared to Ryan from 1967 to 1985 but was a 2x All-Star in addition to being a 1969 World Series champion with the Mets, same as Ryan. 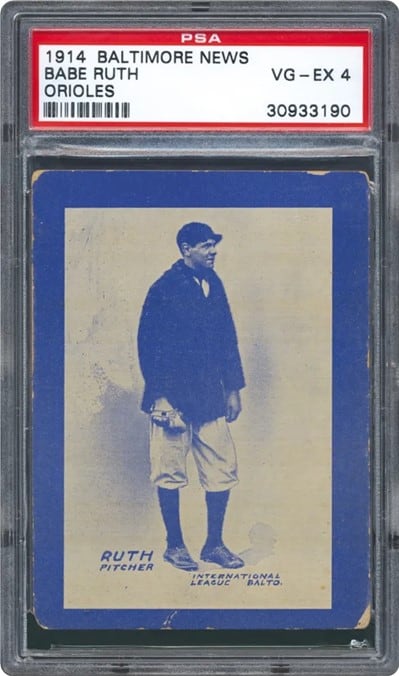 This won’t be the last time you hear Babe Ruth on this list. The Babe being the sport’s most famous player comes with the kingly burden of having several of its most valuable cards. This Baltimore News #9 card comes from back when Babe played for the Baltimore Orioles, circa 1914.

Jack Dunn of the minor leagues hired Ruth to the team, though financial troubles would force him to sell his contract to the Red Sox the same year. This has led to this pre-rookie Babe Ruth card becoming ultra-valuable, with only about 10 copies of the card known to still be around. Both the blue and red-bordered cards are equally rare and can sell for over $900,000 in good condition.

Babe Ruth was discharged from St. Mary’s school before turning 19 and was signed to the Orioles under mysterious circumstances, with many stories suggesting that Ruth jumped into a random game and pitched it to victory while Jack Dunn watched. According to Ruth, he just worked out on the mound for a half hour and Dunn signed him on the spot. 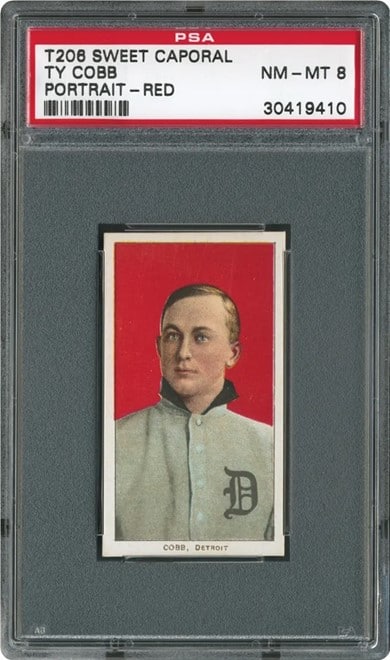 The Ty Cobb Tobacco cards are an oddity. Since they are their own brand and not an established collector’s set like Topps, some collectors don’t count them as official MLB trading cards. However, this has not stopped the rare Ty Cobb Tobacco cards from fetching huge premiums at auctions, including a 1911 T206 that sold for $1.1 million.

The back of the card says, “’Ty Cobb’ King of the Smoking Tobacco World.” These controversial cards may be the rarest in the entire world in higher conditions. Only their less-than-official status has kept them from fetching higher prices.

Only 22 examples of the Ty Cobb card are known to exist. One lucky family in 2016 discovered a paper bag in their great grandfather’s home that contained no fewer than seven cards from this era, including the ultra-rare Ty Cobb shown here, which is the best condition any of these ultra-rare cards have ever been discovered in. 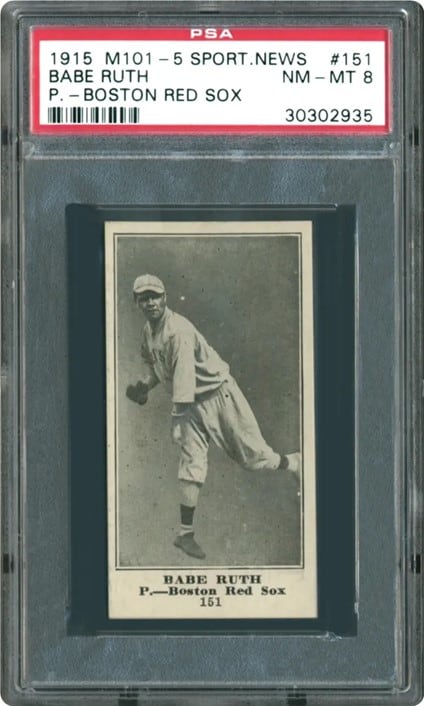 While not quite the oldest baseball card on this list, this Babe Ruth M105-5 Sporting News Rookie Card goes back quite a ways. Those used to the Topps look may be surprised to see the card’s skinny length and faded photo, which depicts Ruth playing for the Boston Red Sox. So this was before he was sent to his now-infamous run at the Yankees.

The M101-5 set contained 200 cards. The Babe Ruth rookie card is the essential card in the set, no matter what advertising back you find. Many even feature blank backs. At high quality, this card’s value has been estimated by the PSA card graders to be in the neighborhood of $1.35 million.

Babe Ruth’s impact on the teams he played for, even just as a leftie pitcher before playing any other position, is difficult to understand from today’s perspective. Let’s put it this way. Ruth played six seasons for the Red Sox and in that time, they won the World Series champion title three times. In the century since he has stopped playing for them, they have won that title only four more times. 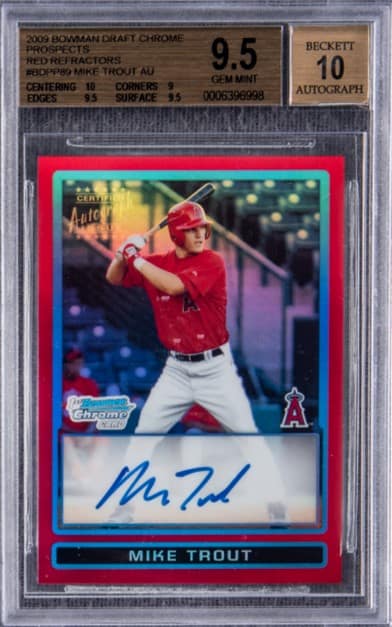 Unlike the other player cards on this list, Mike Trout is a contemporary baseball champion. He’s been an all-star in nine out of eleven of his seasons and has won three awards as an American League MVP. He plays outfielder for the Los Angeles Angels and is widely considered a shoo-in for the Hall of Fame.

This Bowman Draft card, BDPP89, a subset of Topps, was created to be rare. This base card is short-printed and autographed in a limited gold edition, produced only once. When it sold in August 2020, it fetched a world record $3.9 million for this one-of-a-kind beauty. It’s been beaten since then, however, as you’ll soon see.

Mike Trout has batted a .305 average throughout his decades-long career so far. This has included 310 home runs and 1,419 hits. So far, he has been an All-Star nine times, an AL MVP three times, an All-MLB First Team member twice, and has won the AL Hank Aaron Award twice. 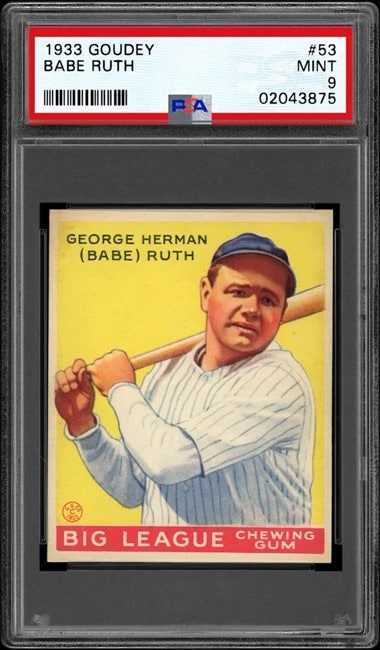 Goudey is not a name often repeated in common trading card circles compared to Topps. However, the Goudey Gum Company indeed made baseball cards, including a 240-card set of them that included four different Babe Ruth cards, including this one. The Babe was not only the first international baseball star but also arguably its most famous player of all time. He was part of the first Hall of Fame in 1926 and a member of the MLB All-Century Team.

Babe Ruth was famous enough to earn himself a ton of nicknames in his career. These included “The Colossus of Clout,” “The Sultan of Swat,” “The Titan of Terror,” “The King of Swing,” “The Big Bam,” “The Great Bambino,” or perhaps most famous and most appropriately, simply “The Babe.” 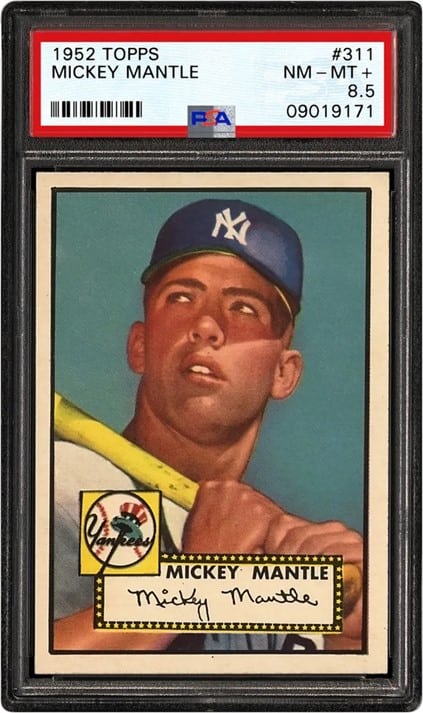 This Topps baseball card of Mickey Mantle, arguably the second most famous name in baseball behind The Babe, sold for $5.2 million in 2021. From 1951 to 1968, Mantle garnered a reputation for being the best switch-hitter in the sport, until he started to get a reputation for his injuries instead of his wins. Many baseball historians believe that he might have challenged Babe Ruth for the all-time home-run record had he not been hurt, ending his own run with 536.

This card has a story to go with the legend. 1952 was a slow year for Topps cards sales, leaving Sy Berger, the company owner, with hundreds of cases of unsold cards. Rather than store them, he dumped them in the nearest river (the Hudson). As a result, ironically, cards that were part of that run, including the ’52 Mickey Mantle, are some of the rarest and most valuable in the world. 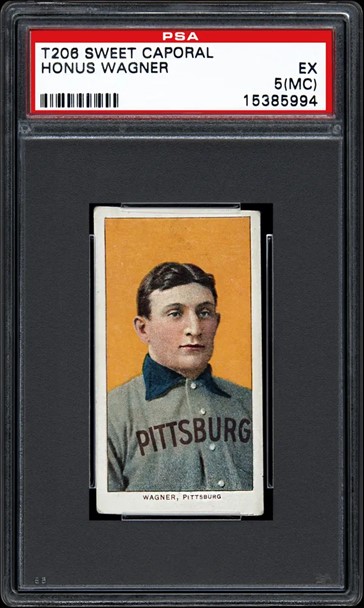 The most expensive baseball card is the Honus Wagner T206. Honus Wagner made his name playing for the Louisville Colonels and then the Pittsburgh Pirates back in 1897 through 1917. In the National League, he was number one in batting, runs, and stolen bases, eight, five, and five times each, respectively.

When the first Baseball Hall of Fame was created in 1936, Wagner was one of the first to be inducted. The American Tobacco Company released this baseball card, the T206, in 1911. In August of 2021, it was auctioned off for $6.06 million, making it the most expensive baseball card of all time.

The Wagner T206 card was rare even at the time of its production. There are two competing legends as to why. One is that Wagner was a teetotaler, meaning he didn’t drink alcohol or smoke, and the card became limited due to his objection to being on a tobacco card. The other possibility is that he wanted more money from the company for the use of his likeness. Either way, the card was rare to begin with and is now an absolute treasure.

The rarest baseball cards have passed from collector’s items into legends. With many of these cards fetching millions at auctions and the ceiling for the most valuable ones raising every year, it’s anybody’s guess which card will become the most expensive next.

8 Most Expensive Paintings Ever Sold in History