8 Most Expensive Paintings Ever Sold in History

The most expensive paintings ever sold represent not only significant collectors’ items but also key moments in important art movements. These paintings are therefore valued both for visual enjoyment and historical significance. Many are crucial keystones in the progression of an artistic style or in the life of a famous and influential artist.

The works presented here are the most expensive ever sold at the time of writing. Continue reading to learn about the enormous prices and historical backgrounds of some of the most significant pieces of art ever made. 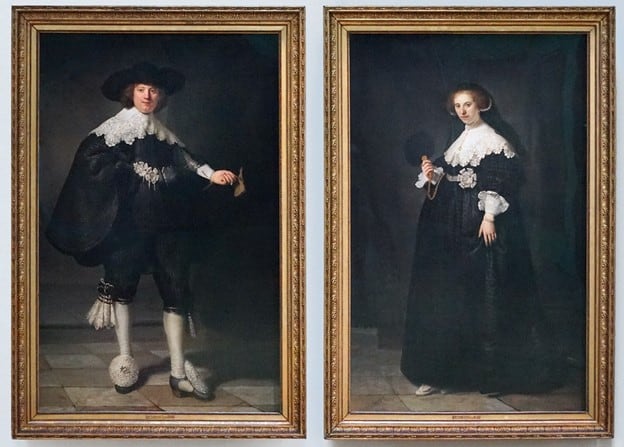 The paintings known as the Pendant portraits of Maerten Soolmans and Oopjen Coppit are actually two wedding portraits by the Dutch master, Rembrandt. They were painted for the marriage of the two people in 1634. Though they were painted as two distinct pieces, they have always been bought, owned, and displayed together throughout France and the Netherlands.

In 2016, these paintings were bought jointly by the Rijksmuseum and Louvre Museum for an adjusted price of $197 million.

These two paintings are full-length to match the size of the subjects, a unique occurrence in Rembrandt’s work. Oopjen Coppit outlived her husband, remarried Captain Maerten Pietersz Daij, and outlived him as well. As a result, the family who once owned these paintings falsely identified the subjects as “Meneer Day” and “Mevrouw Day,” a transliteration of “Daij.” They had been known by that name until the 1900s. 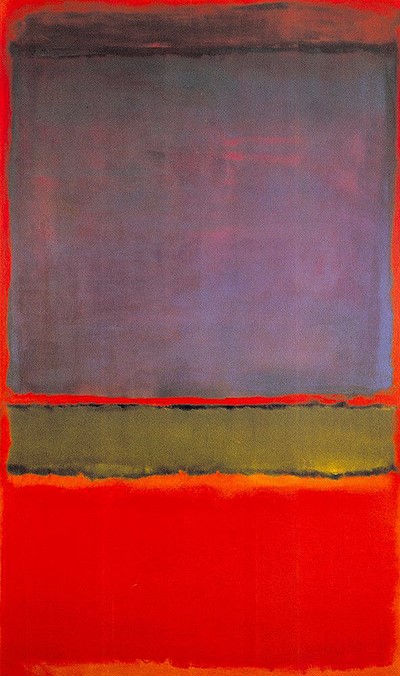 Mark Rothko was a Latvian-American artist known for using solid colors with shaded delineations to create tall, abstract pieces. The most expensive of these is an oil painting completed in 1951 called No. 6 (Violet, Green and Red). It was sold in 2014 to a Russian billionaire for an adjusted price of $197 million.

Like another painting later on this list, No. 6 was part of the Bouvier Affair, which was a series of lawsuits concerning art value misrepresentation across middle Europe.

Despite being well-known as an abstract expressionist, Rothko never consciously ascribed his work to a single movement. He wasn’t always associated with the abstract, however. In the 1940s, his work was more Surrealistic and tragic. 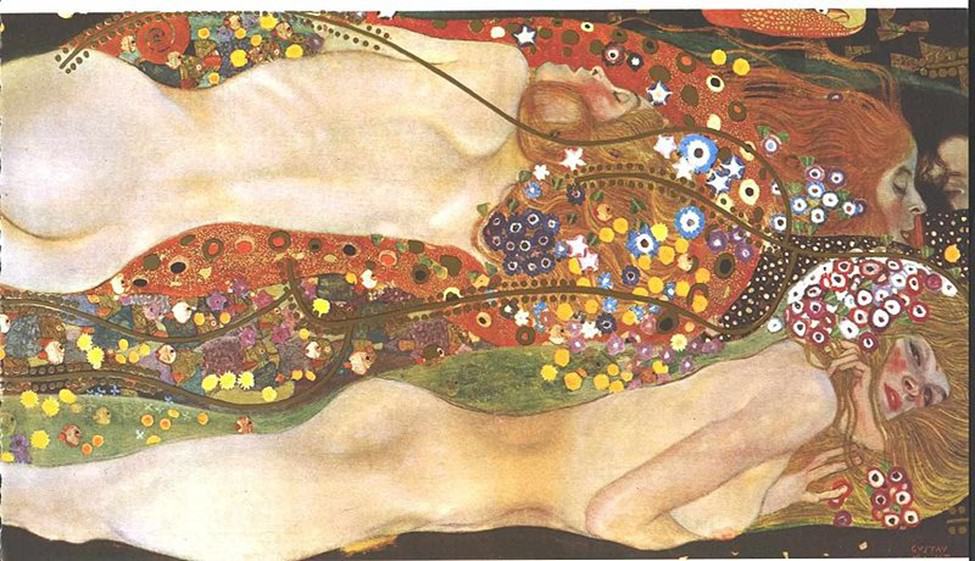 The Austrian symbolist painter Gustav Klimt is best known for his series of paintings of the “Woman in Gold.” However, Wasserschlangen II or Water Serpents II remains his most expensive work to date, selling in 2014 for $204.2 million in adjusted dollars.

This oil painting depicts images of water, fish, mermaids, and Klimt’s iconic swirls of jewel-like gold embellishments. The painting includes four figures in total in a portrait of mythical lust that is almost as controversial as the sale of the work itself.

Controversy surrounding the painting’s true value remained a subject of debate throughout the last century. Jenny Steiner was the painting’s original owner. She had to leave the painting behind when fleeing Vienna from the Nazis in 1938, after which it was confiscated. The painting’s possession and sale to subsequent Russian collectors has been mired in questions of who “actually” owns the work. It has been bought several times, finally sold to an unnamed Princess of Qatar in 2014 for this record-breaking price. 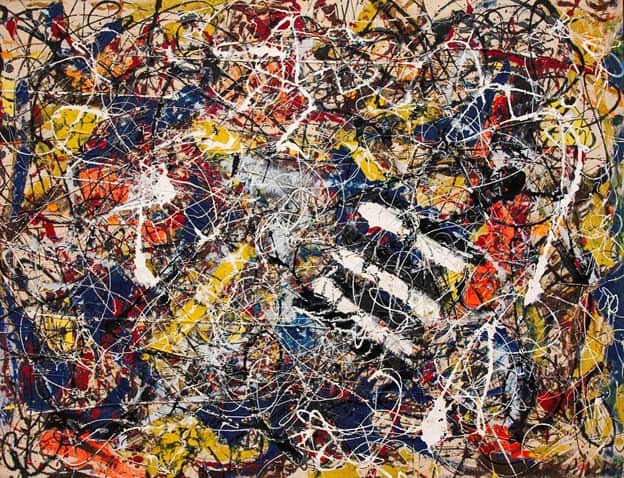 The abstract expressionist, Jackson Pollock, was as much known for his unique techniques as for his high prices. The oil paints were dripped onto a canvas of fiberboard, which was turned horizontally. Number 17A, arguably the most famous example of this technique, was painted in 1948, just a year after the world was introduced to this new style.

This is the painting that made Pollock a household name in art when it was featured in Life magazine, 1949. It is now owned by the hedge manager, Kenneth C. Griffin, for $218 million (adjusted).

Pollock was known for being unstable. Some art historians suggest that he had manic depression, an idea compounded by records of his Jungian psychotherapy sessions in the late 30s and early 40s. He was also a known alcoholic. 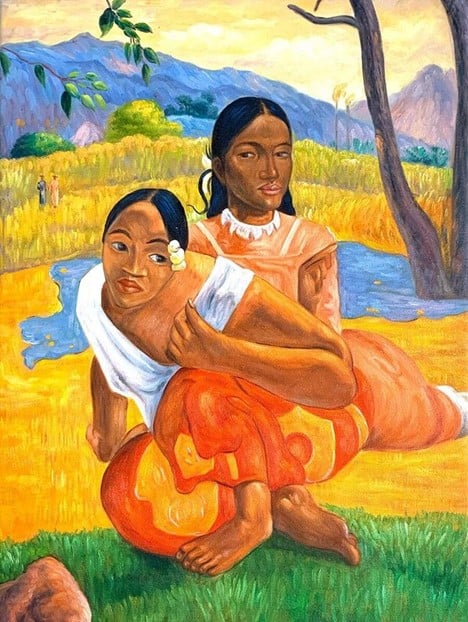 Nafea Faa Ipoipo is an oil painting by Paul Gauguin, completed in 1892 and depicting native Tahitian people. The painting’s title translates to When Will You Marry? It currently resides at the Kunstmuseum Basel in Switzerland, which is the oldest public art collection in the world.

The painting was sold in 2014 to the Royal Family of the State of Qatar for $229 million. This will not be the last time they come up on this list.

Gauguin went to Tahiti in 1891 to find subjects for an art series on primitive paradises. However, he discovered that since colonization in the 1700s, Tahiti had become a far less populated and indigenous place. To communicate both his intentions and the changes, he combined indigenous and colonized imagery. Consider this particular painting, where the woman in front is dressed in the clothes of her people while the woman in back is dressed in a Western-style dress. 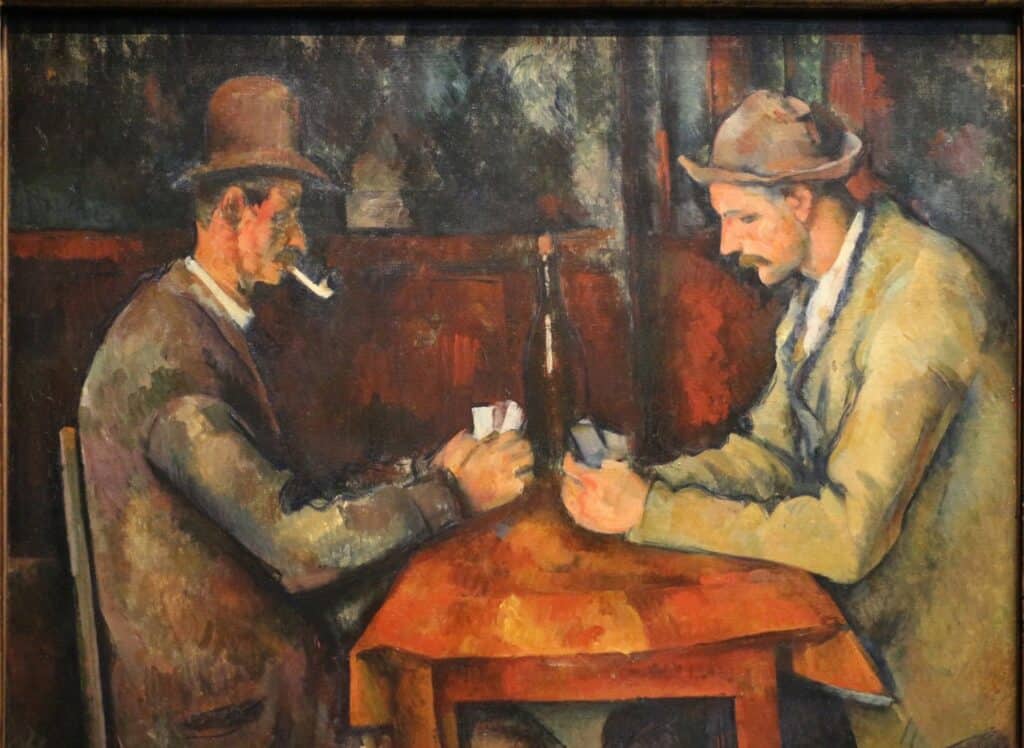 The Post-Impressionist, Paul Cézanne, is known for many paintings, including a series of works in oil of people playing cards. The most famous of these was painted between 1894 and 1895 and is titled simply, The Card Players.

In 2011, this painting was sold to the Royal Family of the State of Qatar for a then record-breaking $250 million, which is $287.6 million adjusted to today’s dollars. As you’ll see, it was soon surpassed, however. The painting currently resides at the Musée d’Orsay.

The Card Players represents a large body of work by the French Post-Impressionist, and therefore a significant amount of art history. Not only are there five finished paintings of the players but there are also numerous studies, sketches, and pre-paintings of the farmers depicted. Art historians believe that the workers posed for these studies at the Aix Café so that the artist could sketch them and simply transferred them to the finished paintings later, at another location. 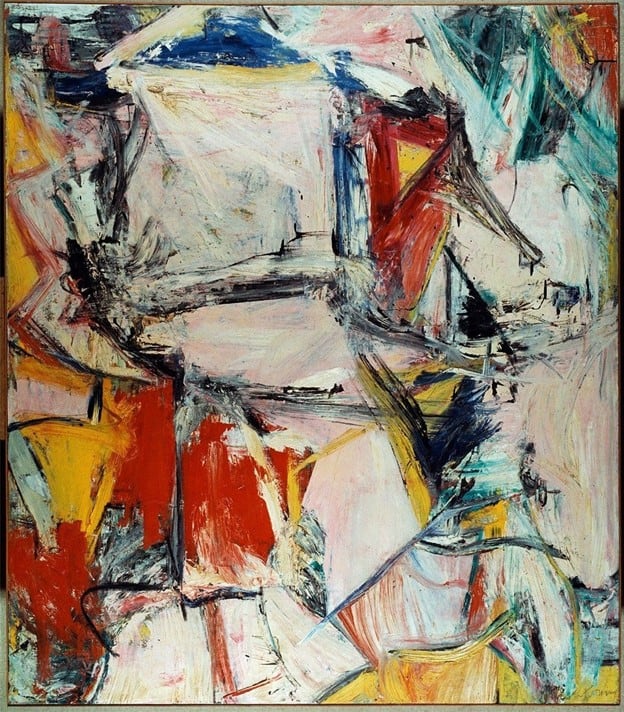 This abstract expressionist painting in oil was done by Willem de Kooning, a Dutch-American expressionist, in 1955. The title of the painting, Interchange, is both internally and externally symbolic. In other words, it describes the picture itself but also refers to a change in de Kooning’s career. This is when he began to stray from concrete subjects like female figures and progressed to his late-career fascination with abstract urban scenery.

Despite this, there is an abstract depiction of a woman in pink in the painting’s center, if you squint. The painting sold in 2015 to Kenneth C. Griffin for $328 million. It is currently on loan to the Art Institute of Chicago.

De Kooning is responsible for many other highly prized abstract expressionist works, including Composition, Police Gazette, and Easter Monday. 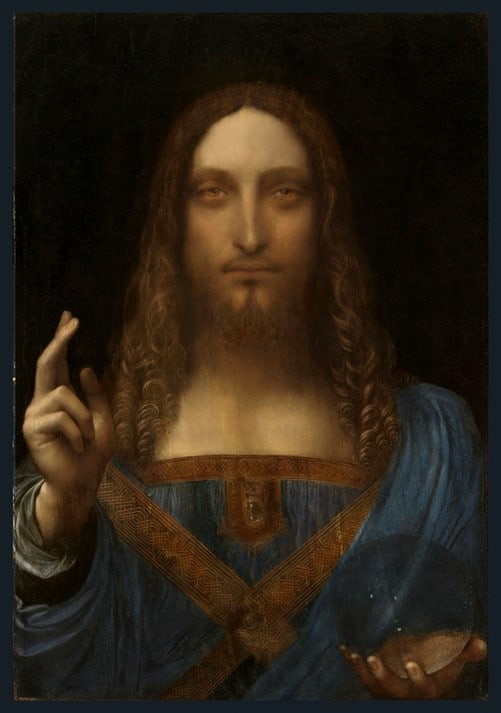 The most expensive painting is Salvator Mundi. This painting by Leonardo da Vinci has often been debated by art historians in terms of authenticity. For many years, the original was thought to be lost. However, among the many copies, they discovered the original, obscured by more recent paint. Once removed, the original work, painted around 1500, became clear.

This painting was sold in November of 2017 to Badr bin Abdullah Al Saud of Afghanistan, through a middleman. Its final price was $475.4 million, making it the most expensive painting ever sold.

Leonardo da Vinci ran a workshop of artists, many of whom painted their own works as well as contributed grunt labor to the master’s. It’s unknown whether Salvator Mundi is a painting that can be attributed to da Vinci alone or should also include credit for his hardworking workshop.

The world’s most expensive paintings represent art history movements changing, scandals developing, artistic visions evolving, and more. These paintings, all worth hundreds of millions of dollars, are powerful expressions of their individual positions in the art world. Any art lover would be lucky to see one of these masterworks, let alone own one.

9 of the Most Expensive BMWs Ever Sold