Board games have been a part of life, every era has seen one – from mere sticks and stones to marbles, to dice games, poor or rich everybody has once entertained themselves with a good board game now and then. The history of board games can be dated back to Predynastic Egypt, which is way before the Pharaoh. Board games haven’t lost their appeal with family game nights still as popular as ever they have just evolved into more interesting schemes, imaginative narratives, and beautifully designed. Though video games are taking over as the main source of entertainment you still can’t right of the appeal of a traditional board game for good old-fashioned entertainment.

This should come as no surprise how board games have also become a collector’s favorite item. Despite popular belief, the rarity of a board game is not judged only for its age, it also has to do with how many of them were published and how many of them have survived circulation.

Here are few rare board games that are hard to find. 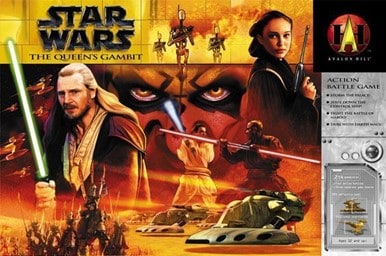 The game initially retailed for $100, but as all Star Wars things go, this too now has risen to $1000 after it becomes somewhat rare. The Phantom Menace might have not seen the same kind of approval as other Star War movies do, but this board game based on the film became quite a hit. It came out in 2000 before the movie was released. The game is a strategy game that involves cards, individual moving pieces, a 3D palace, and 16 dices.

If you have one of these sitting in your attic, no that it will probably sell for more than a grand. 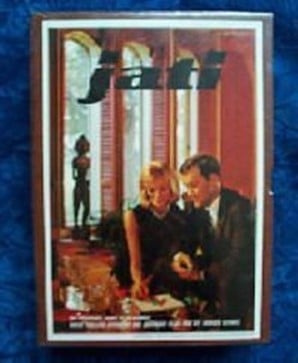 This one was just a candidate for publication but never was published in sellable quantity. Total 100 copies were made which were used to playtest for quality and experience. Still, however, few copies slipped through and are rare today. The game is a rather straightforward tile placement game and can be played in groups of 2 to 4 with a 10×10 inch board as the playing board. 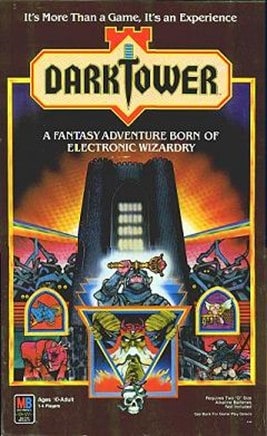 Dark Tower is one of the very covetable games. It both ranks high on an entertaining and interactive level. The game is uncommon and enjoys a vintage label as it was released in the early 80s. Dark Tower was one of the first attempts at including electronic components in gameplays which was a tower that was situated in the centre of the board, no wonder it was everyone’s favorite back then and developed a cult following. Today, properly working copies of Dark Towers are hard to find and that’s why they are highly sought after by collectors and hobbyists. Dark Tower was produced in limited quantities because soon after its publication it became subjected to a lawsuit brought on Milton Bradley for intellectual property theft.

It is predicted that its sequel dubbed as ‘Return to Dark Tower’ being developed by Restoration Games will shortly release in July 2021. 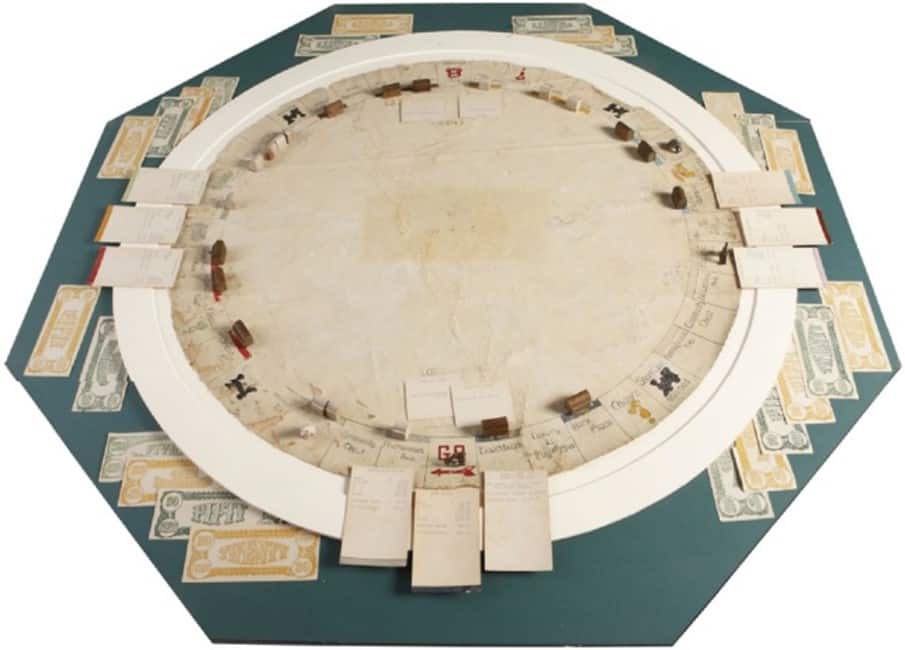 Charles Darrow created his first edition of Monopoly in 1933 as prototypes before selling his idea to Park Brothers, which they initially rejected and only accepted after he sold 5000 of his handmade copies. His initial design featured properties from around the Atlantic City.

Darrow has been surrounded by controversy and has been accused of stealing Elizabeth J Maggie’s idea of her game ‘The Landlord’s Game’ to develop his concept of Monopoly.

Park Brothers later bought rights for the Landlord Games too, free to pursue Monopoly’s publication then. To this day over 250 million copies of Monopoly have been sold in many languages and themes which make it the most popular board game in the world.

Imagine a board game where chess and formula 1 racing comes together – this board game is just that and more. A spectacular collector’s item, the Renault F1 Team Collection Chess Set is manufactured using stainless steel, fine class aluminium, and titanium, not surprisingly these materials are used in making Formula 1 cars too. The chessboard is made of supreme quality carbon fiber. It’s one of the super rare chessboards and truly exquisite. 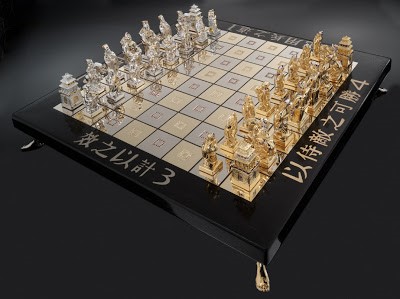 Another luxurious piece of art and the second most expensive chess set in the world is designed by Victor. F. Scharstein and called ‘Art of War Chess Set’. It features beautiful pieces made with ornamental details. The design is influenced by Chinese history and aesthetics. The chessboard is made of ebony and gold and comes lined with high-quality velvet. The chess pieces are lined with diamonds, rubies, emeralds, sapphires, and more. 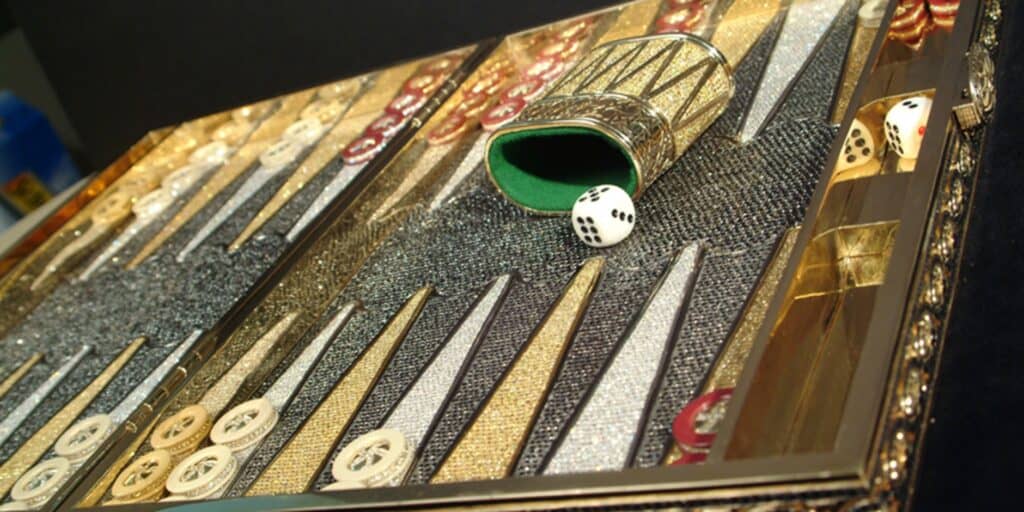 The history of backgammon can be traced to 5000 years ago in Mesopotamia. The game has been played for centuries and still to this day has a huge fan following, its one of those classics that you can’t write off. This particular piece was designed by Bernard Macquin in for Charles Hollandar collection. It was inspired by the old ancient art of Mesopotamia.

The luxurious game board features more than 60, 000 black, white and yellow diamonds weighing 2071 carrats. The whole thing took 10, 000 man hours to realize. It weighs 6.7 kg of gold and 150 g of silver. What a feat!  Definitely one of the rarest in my book. 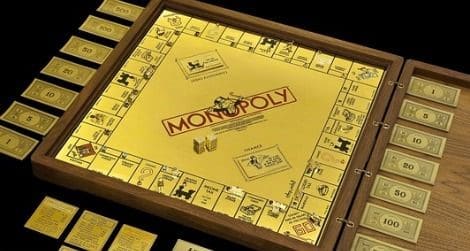 Sidney Mobell has turned many items into fine jewellery; among his creations is a Monoply set like none other. This limited edition board game was manufactured in 1988 and is made of 23 carat gold, has a collection of extraordinary 165 gemstones which include 60 diamonds, 47 saphires and 24 rubies. The dice itself is worth 10,000 dollar. The set is more of a display kind rather than playing type, unless you really like to roll in gold. 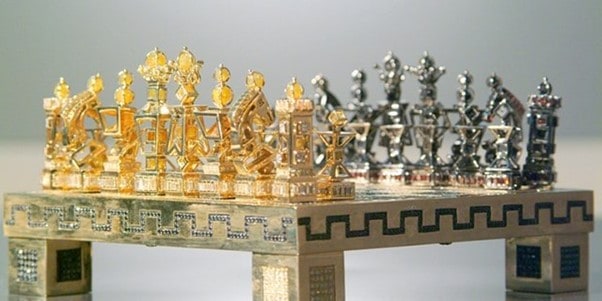 If opulence could be captured in a chessboard it would be this! What a sight to behold. The bejewelled chess set was commission by the Royal Jewel Company and was made in Britain. Its extravagance includes solid gold, platinum and features 748 diamonds, 73 rubies, 146 sapphires, and even is crusted with black and white luscious pearls. It retails for $9.8million making it the most expensive chess set ever.

It’s safe to say that the Royal Jewel Chess Set is the rarest board game.