Baseball cards are some of the most sought after items in the card collecting hobby and can fetch thousands, even millions, of dollars at auction. Of course, the rarer a card is, the more valuable it is and the cards on this list are not only some of the hardest to find in the hobby, but routinely sell for at least tens of thousands. Some of the more iconic cards on this list are even worth a couple million dollars!

As of July 2021, this list is as accurate as possible, but as more of these rare cards turn up or go up for auction and time passes, the value of these cards will undoubtedly change. 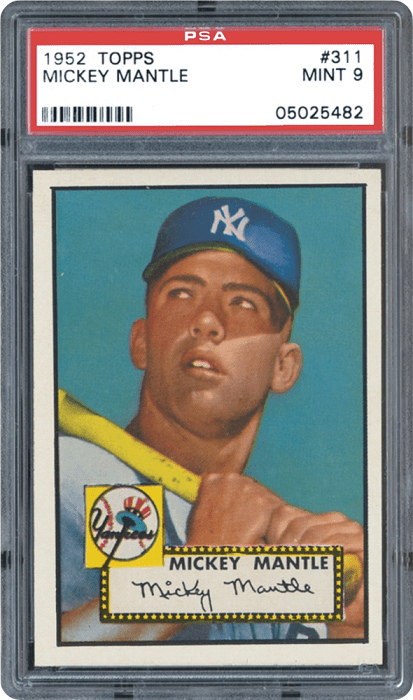 The reason for this card’s particular scarcity and value is for a number of reasons: 1952 was the first year that Topps began making sports cards so any of the first run cards are highly desired and high number cards, between 311 to 407, were not printed in high volumes so fewer of them have survived.

One more fascinating thing that makes the Topps #311 Mickey Mantle cards fairly hard to come by is that in the early 1960s, Topps’ card pioneer Sy Berger dumped many of the first run cards from 1952 into the ocean because they were taking up too much space in the company’s warehouse. 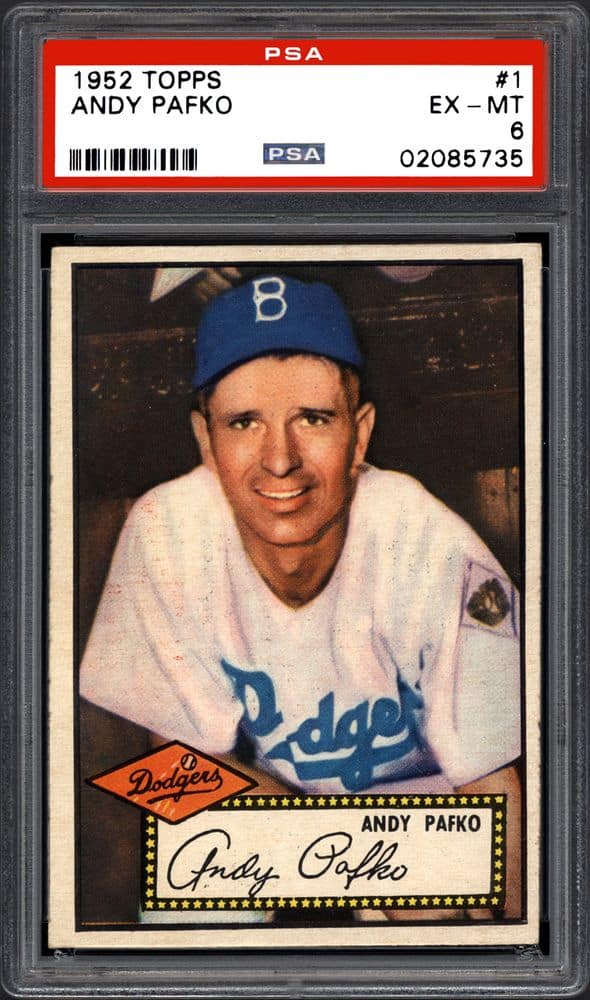 Andy Pafko was not a star baseball player and never made it into the Hall of Fame. However, he is now best known for being on the first baseball card ever produced by Topps. In 1952, Topps released #1 Andy Pafko in its very first set of baseball cards. The reason the Topps #1 Andy Pafko is now rare is because at the time the card was first released, kids always put the first card in a set on top of their stack. This meant that any opened Topps #1 Andy Pafko cards were worn out. Very few of these cards exist in good condition today.

Only one PSA Mint 10 copy of Topps #1 Andy Pafko has ever been found. The card was discovered in 1998 when a collector took the chance to open a sealed pack of 1952 Topps baseball cards and made the find of a lifetime. 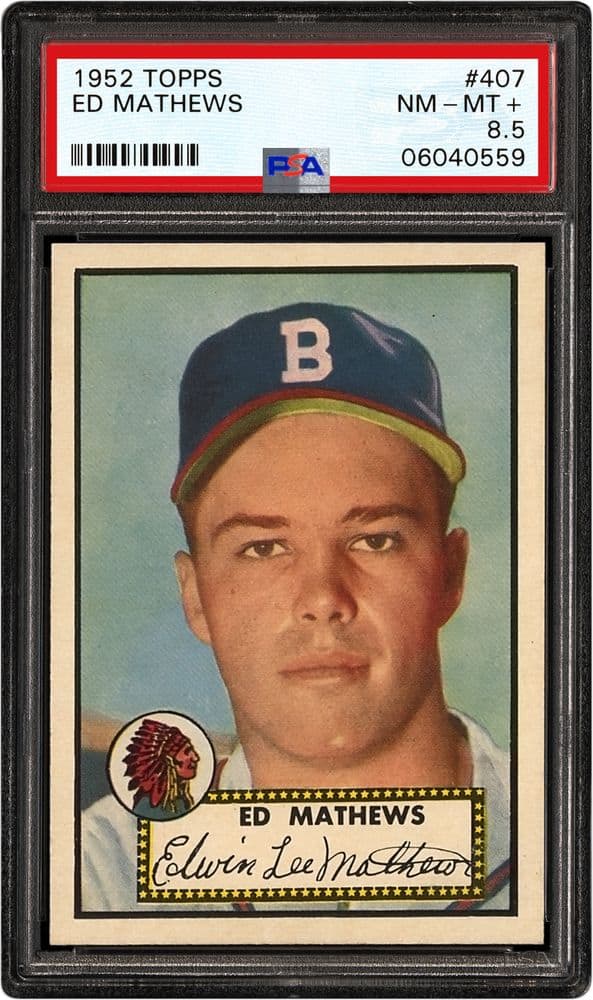 Typically, Topps #407 Eddie Matthews cards in good condition sell for tens of thousands of dollars. PSA estimates that a mint condition copy could be worth a quarter of a million dollars. 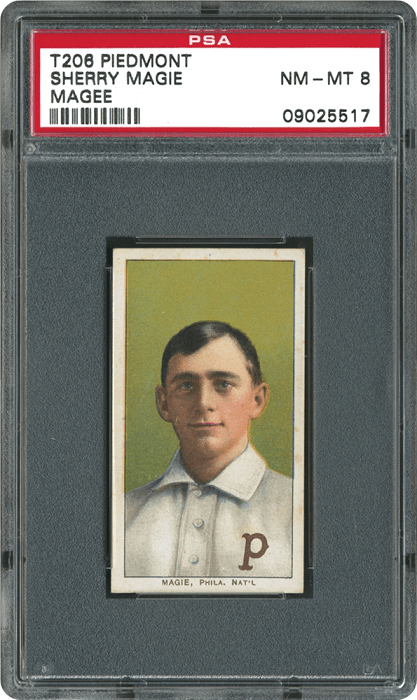 Along with the Honus Wagner, Joe Doyle error, and Eddie Plank T206 cards, the Sherry “Magie” (Magee) error card is one of the rarest and most valuable baseball card in the baseball card collecting hobby. Of all the error cards, this one is the most famous because Magee’s last name is misspelled as “Magie.”

Like all the rare T206 cards, the Sherry “Magie” is valuable even in poor condition and can sell for a few thousand dollars. 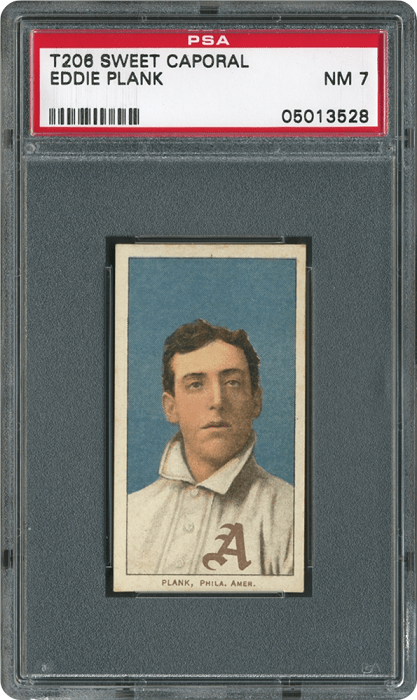 Although the T206 Eddie Plank card is not quite as rare as some of the other cards on this list, it is widely considered to be the second most desirable card in the T206 series and highly underrated. Like the T206 Honus Wagner card, very few Eddie Plank cards were produced.

The reason why so few Eddie Plank cards were made remains a mystery, but many experts speculate that Plank (and also Wagner) either wanted to be paid more for his image or just didn’t feel comfortable promoting cigarettes to children. Plank was actually one of the most outspoken anti-tobacco advocates in baseball and he lived a very clean lifestyle free of alcohol and partying as well.

Besides the speculation over whether or not Eddie Plank asked to be removed from the T206 series, one of the most likely explanations for the scarcity of T206 Eddie Plank cards is that the printing plate was deeply flawed and many of the cards had to be destroyed because they did not pass quality control standards. 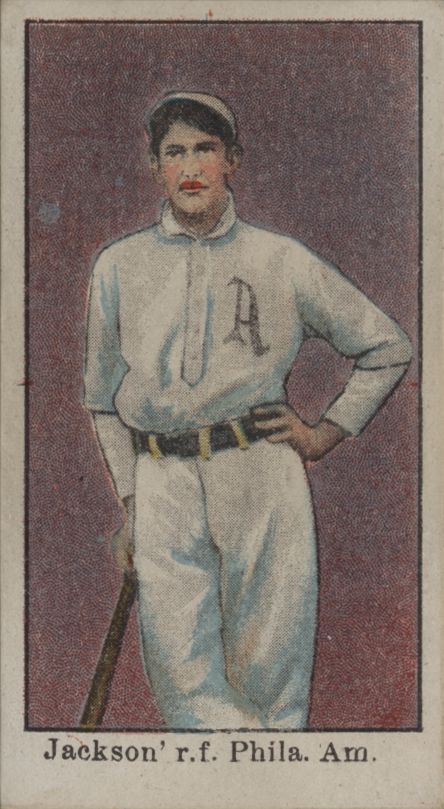 “Shoeless” Joe Jackson is infamous for his alleged association with the Black Sox Scandal, in which players from the 1919 Chicago White Sox attempted to fix the World Series. Arguments over whether or not Jackson participated in the career-ending event still persist today, and many people believe that he would have been one of baseball’s greatest had his career not ended so early and unfavorably.

The American Caramel Joe Jackson cards is one of the few cards to show Jackson as a member of the Philadelphia Athletics, as he only played 10 games with the team between 1908 and 1909. 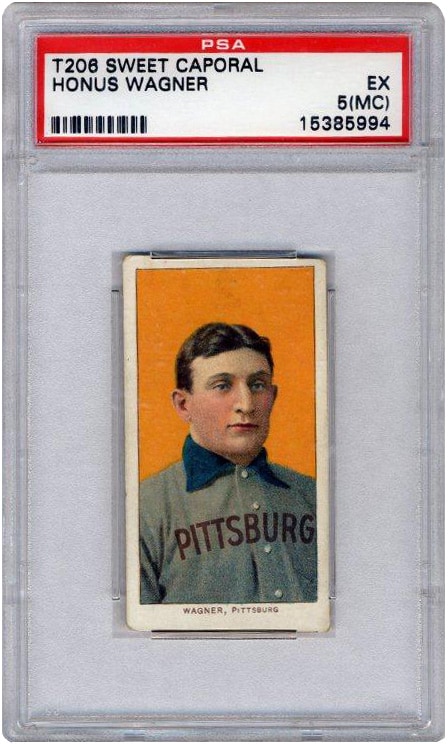 Of all the baseball cards to ever exist, the T206 Honus Wagner is the most coveted because so few were produced. It is estimated that only about 50 to 200 T206 Honus Wagner cards were ever released, which is significantly lower than the “tens or hundreds of thousands” of T206 cards produced for other players. Although there are between 50 to 75 T206 Honus Wagners known to currently exist, these cards do not often go up for sale very often and this only increases its value.

As of 2016, the most paid for a T206 Honus Wagner was $3.12 million. At the time this was the most ever paid for a baseball card, but this record was recently broken. Other examples of this rare Honus Wagner card have sold for between $451,000 to $2.8 million.

While no one knows for sure why so few T206 Honus Wagner cards were produced, there is speculation that Wagner personally asked to be removed from the lineup because he either didn’t like the cigarette company marketing the cards to children or because he wanted more money from the company to use his image. 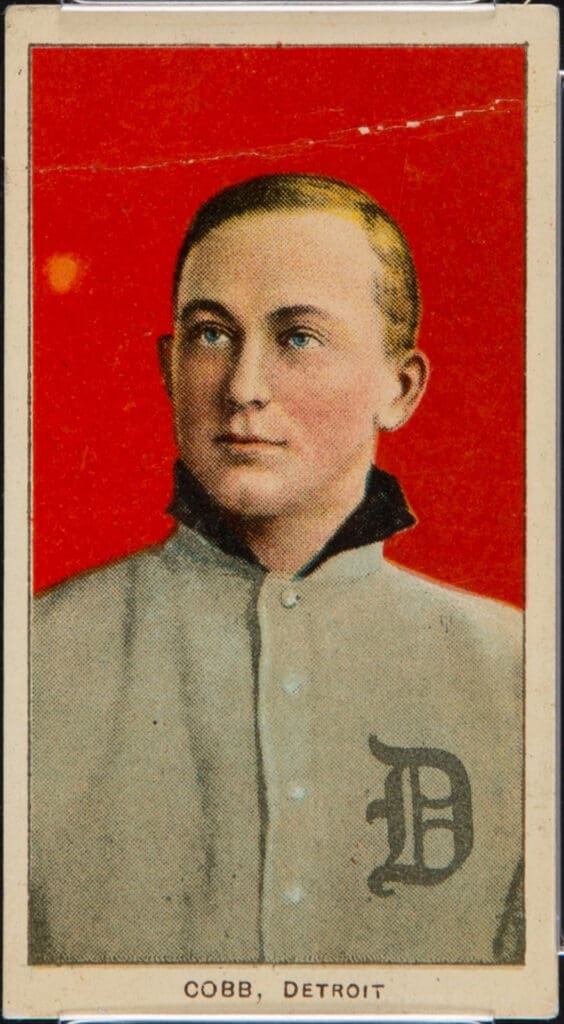 Ty Cobb, aka The Georgia Peach, is one of the most legendary baseball players to have ever lived and his baseball cards and memorabilia are some of the most popular collectible items. With many Ty Cobb cards produced over the years, they of course range in rarity and value. Of all the Ty Cobb cards out there, the T206 Ty Cobb Back is the rarest and most valuable.

In 2016, an anonymous family from the Southern United States made the discovery of a lifetime when they found seven of these rare Ty Cobb Back cards in a paper bag that was nearly thrown out. The find, dubbed “The Lucky 7” was eventually sold for auction for about $3 million!

Two years after discovering the The Lucky 7 Ty Cobb Back cards, the same family miraculously found an eighth card, but has decided to keep it as a memento of their incredible luck and good fortune. 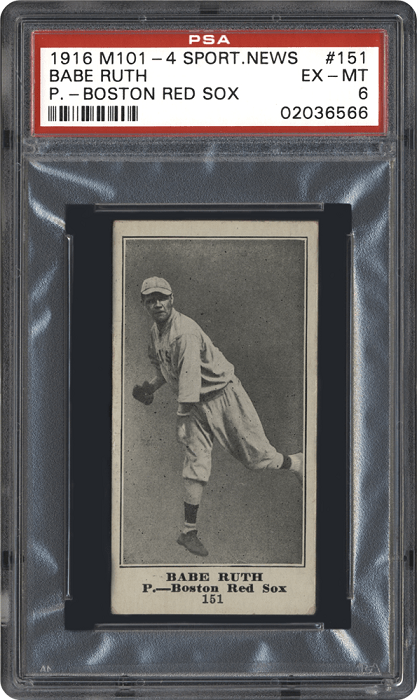 Babe Ruth is unarguably the greatest player that baseball has ever seen and anything associated with him is valuable and collectible. However, the Sporting News Babe Ruth rookie card, is not often talked about in the baseball card collecting hobby and is typically overlooked. Although this piece of Babe Ruth card is overshadowed by legendary T206 Honus Wagner and Topps #311 Mickey Mantle, it is worth a pretty penny and difficult to find.

In 2019, the Sporting News Babe Ruth rookie card was back in the spotlight when one was put for auction after being discovered in a piano along with 79 other vintage baseball cards from over 100 years ago. 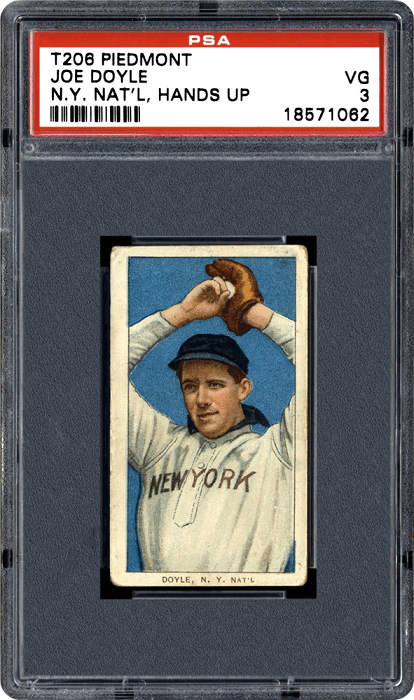 While there are a few cards in the famed T206 series that are hard to come by, the T206 Joe Doyle N.Y. NAT’L error card is the rarest baseball card in the world with fewer than 10 known examples. The reason for the rarity of the Joe Doyle card is that it incorrectly listed N.Y. NAT’L after Doyle’s name – Doyle played for the Highlanders of the American League and not the Giants of the National League.

The mistake was caught early on in the production of the T206 series and no one knows for sure how many of the error cards were released to the public. In fact no one even knew that the Joe Doyle error cards existed until 1980s when long-time dealer and collector Larry Fritsch had finally revealed that he had noticed the mistake on the card and was looking for more.

Of the known authentic T206 Joe Doyle error cards, there is only one that has an advertisement for Piedmont 350 cigarettes on the back. It is believed that this was part of the first run of the Joe Doyle cards before the mistake was corrected and other cigarette brands were used.