Huskies are playful, loyal, and funny. These medium-sized dogs make great companions and are loved by pet owners across the world. Many different breeds are colloquially called huskies; however, American Kennel Club recognizes only one breed as the Husky. It is the Siberian Husky.

In this article, we list 8 of the rarest coat colors and patterns that can be found in Siberian husky. For the sake of clarity, we do not include any other breed in this list, even when they look very close to Siberian huskies and can be confused as one.

While talking about the unique and rare coat colors, we also consider different patterns that offer a distinctive look to the dog. 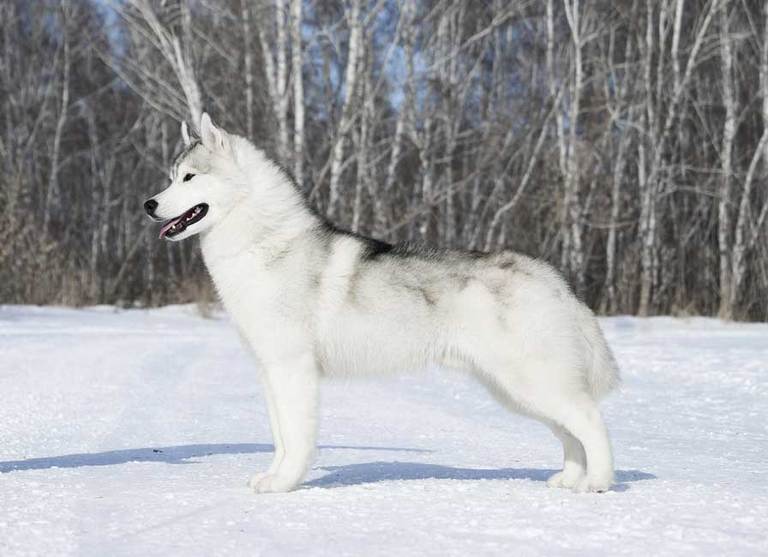 Siberian Huskies can feature three shades of gray; silver gray is the rarest of them. The other two shades of gray are wolf-gray and darker gray.

Silver gray coat color results from complete restriction of the agouti gene. The coats have tones of silver, blue, or other colder shades. The undercoat is white. Silver-gray huskies may also have patches of white, especially on their chest and tummy. However, you won’t find red, beige, or tan on their body. The hair tips are often black. The silver may appear bluer due to the presence of a dilution factor.

Wolf Gray husky is also quite rare but more available than the Silver Gray Huskies. It is a result of the allowance of the agouti gene. Wold Gray Huskies feature a mix of warm shades of gray with tan, red, and beige behind the ears and around the legs and back. The undercoat of Wolf Gray Husky is beige, which blends well with the gray topcoat.

Medium/Dark gray is the most common of all gray huskies. These huskies feature a tinge of warm tones such as red or tan but not to the fullest depth. Their undercoat is a mix of silver and beige.

Siberian Huskies have two layers of coats that protect them from cold weather. The topcoat is longers and water-resistant, while the undercoat is short and thick. 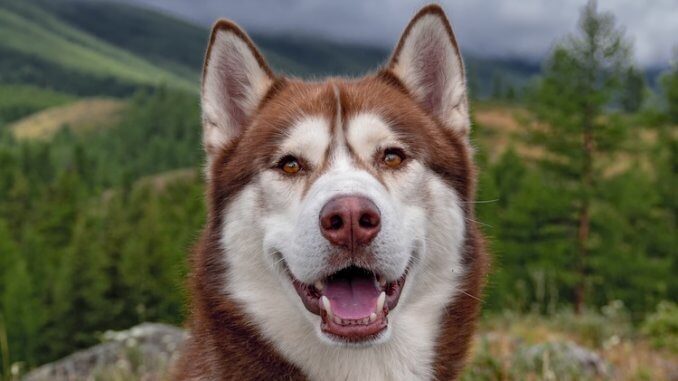 Red and white Siberian Huskies can feature a range of shades, from dark rusty red to a lighter strawberry blonde red. They have whitish patches on their chest, face, legs, and around their ears.

Red Huskies are characterized by a complete absence of black hair. The undercoat of a red and white husky can be light red, copper, or cream. The coloration is caused by a pair of homozygous recessive genes. Due to the dilution factor, the color can fade from dark to light across the body.

Siberian Huskies are most famous for their participation in the historical serum relay. In 1925, there was an outbreak of a diphtheria epidemic in Nome, Alaska. A team of more than 100 Huskies was formed to bring lifesaving medicine from a place located more than 600 miles away.

Rarity: Uncommon
Appearance: At least 75% of hairs are black
Average price: Around $4250

Black is not a rare coat color for huskies, but they often carry the piebald gene, which makes them appear black and white.

Even when a husky has scattered white or tan patches on its legs, chest, face, and the tip of its tail, it is considered a black husky as long as 75% of its body is black. However, to be considered pure black or mostly black, the pigmentation of the husky’s nose, eye rims, and lips must be strictly black.

The color can be jet black, matte black, or dilute black. The last one may appear close to blue or grey. A 75% black husky is also called the afro-husky.

The size of white markings depends on whether the dog inherited the piebald gene from both parents or only one of them.

People belonging to the Chukchi tribe living in the Siberian Peninsula of northeast Asia developed huskies as working sled dogs. 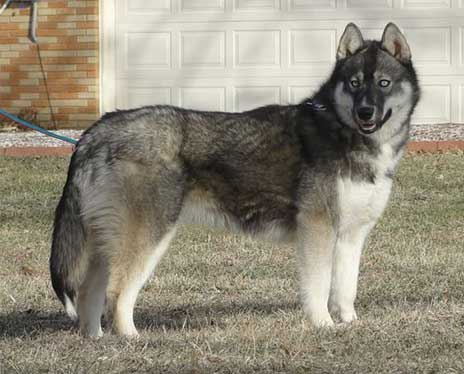 Agouti and White is a standard husky color recognized by the American Kennel Club. Agouti coloring is pretty common for mammals such as wild rodents, deer, and rabbits but rare in huskies or any other domesticated dog breed.

Each individual hair of an agouti Husky features at least two different bands of color, typically shades of black and tan. The outer coat may also contain red or grey. The undercoat of agouti husky is charcoal.

Typically, the root and tip of the hairs are black with tan or red in the middle. A single hair may feature more than two colors. Agouti huskies may have white fur on their nose, chest, and legs. They have a wild appearance, and their body color resembles that of a wolf.

An agouti husky’s face may appear dirty due to the presence of a dominant dark mask. 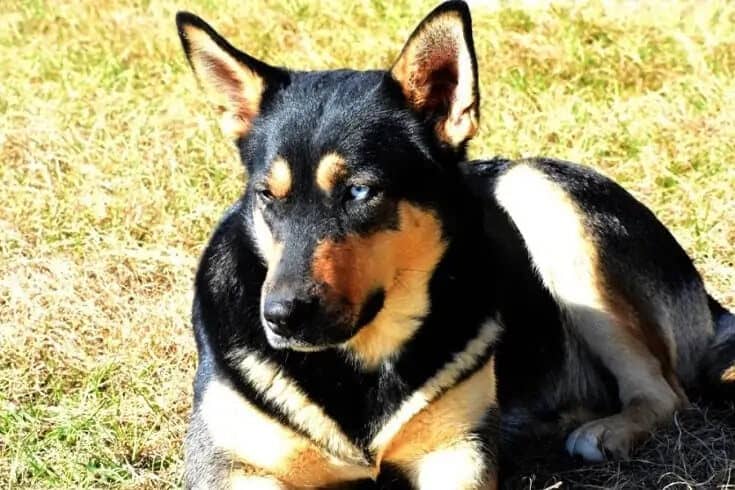 Black and tan is a very rare combination for Siberian huskies. The body of the dog is black with tan markings on its chest, tummy, legs, paws, and face. The black can range from jet black to dilute black.

Black and tan huskies are so rare that they are often only available to breeders specialized in this color combination. They may also ask for a higher price for these unique huskies.

The color combination is, however, more common in the crossbreed between husky and rottweiler known as rottsky. Thus, make sure you check the documentation of the breed before purchasing one.

Blue is a pretty common eye color for huskies. It is caused by a mutated duplication near ALX4. Due to the presence of this gene, the iris of huskies has lower melanin pigmentation, and their eyes remain blue. 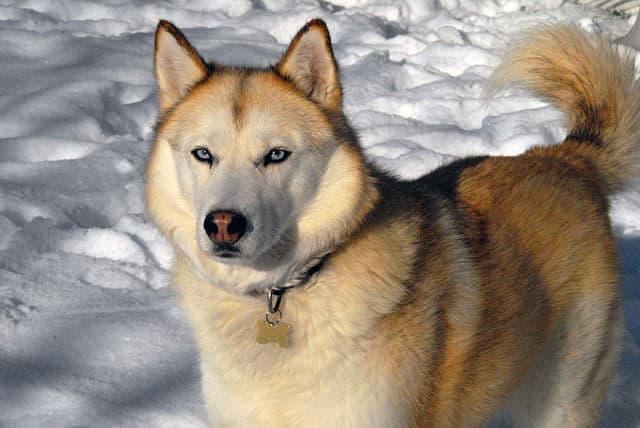 Sable is an extremely rare coat color for Siberian huskies. The undercoat is a shade of red or copper, and the guard hairs are banded with red near the roots and black at the tips. Sable huskies always have black points and black tipping on furs.

The topcoat shade is never influenced by the dilution factor. White patches can be seen on the chest, face, and legs. Some sable huskies may appear wolf grey at birth, but the red tone acquires full depth as the puppy grows. Sables are often called the black-nosed red husky.

The American Kennel Club recognized Siberian Huskies in 1930. The breed was officially recognized by the United Kennel Club in 1938 as the Arctic Husky. The name was changed to Siberian husky in 1991. 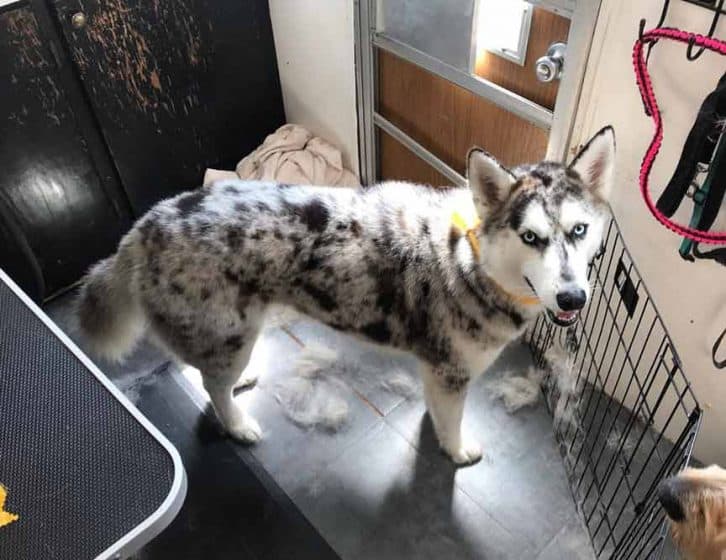 Merle is not a coat color, it is a pattern that is characterized by dark patches on lighter backgrounds of the same coat color. It is caused by the M Allele of the PMEL gene. It alters the base coat color and causes patches.

The affected dog may display a mottled pattern or a combination of color smears and spots. Merle pattern is a result of impure breeding. The god may have issues with hearing or sight. The problem is more acute in dogs that carry two copies of the M Allele gene.

Merle coat pattern is not permitted by the American Kennel Club and any husky with this pattern is disqualified. 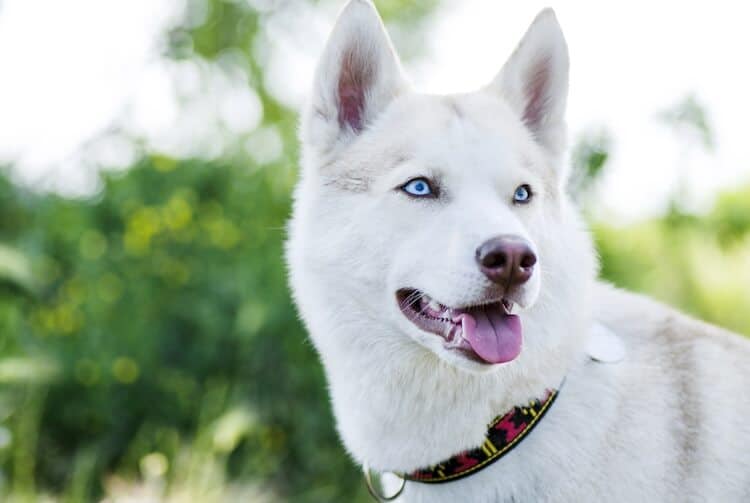 White is the rarest color of Siberian husky. Usually, all light-colored huskies have a few brown or black patches on their body. However, a true white husky does not have such patches. Only the skin around their eyes and nose might have black, brown, or liver color markings.

White huskies are not albinos. Their coat color is controlled by completely recessive genes, and most have blue eyes. However, you can also find white huskies with brown or bi-color eyes. Their undercoat is either white or silver.

You may notice very light cream patches on the body of your pure white husky, especially under bright sunlight. The American Kennel Club confirms that this shading is absolutely normal in white breeds.

7 Most Expensive Hammers You Can Buy