What Is the 1961 Franklin Half Dollar Made Of?

The first Franklin 50-cent coin was issued in 1948. Before that, the 50-cent coin features the Walking Liberty design. The US Mint struck this coin in Denver and Philadelphia. 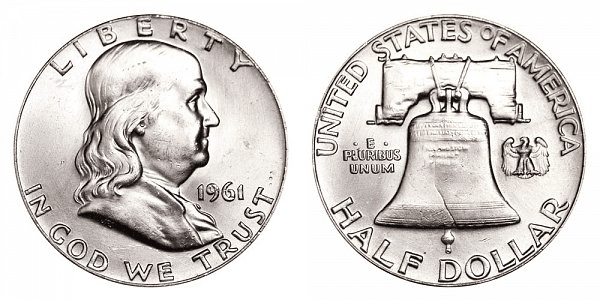 Regarding the design, the obverse features a bust of Benjamin Franklin. He is one of the Founding Fathers of the United States. Inscriptions on the obverse include LIBERTY, IN GOD WE TRUST, AND 1961.

On the reverse, you’ll find the Liberty Bell. Aside from that, a small eagle was included to fulfill the legal requirement that all half-dollar coins should include a picture of an eagle. Inscriptions include UNITED STATES OF AMERICA, E PLURIBUS UNUM, and HALF DOLLAR.

In just a few years later, in 1964, the Franklin half-dollar would be replaced by the Kennedy half-dollar.

The 1961 Franklin half dollar has at least three varieties, which include a proof version. The US Mint that produced the 1961 half-dollar coin were Denver and Philadelphia. If you look at the coin varieties, there are no big differences except for their mint mark. However, proof coins are known to be more detailed, attractive, and shinier in appearance.

Here are the 1961 Franklin half-dollar varieties that you should know: 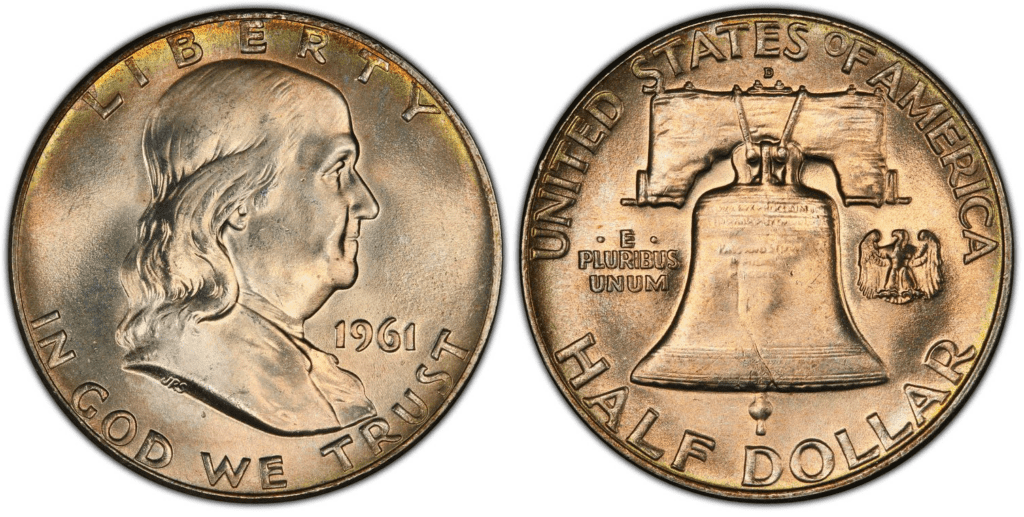 The 1961 D half dollar was produced in the Denver Mint. Thus, you’ll find the mint mark, “D” on top of the Liberty Bell. At the end of 1961, there were more than 20 million of these coins produced. This made the 1961 D half-dollar the most produced variety in the 1961 half-dollar series. 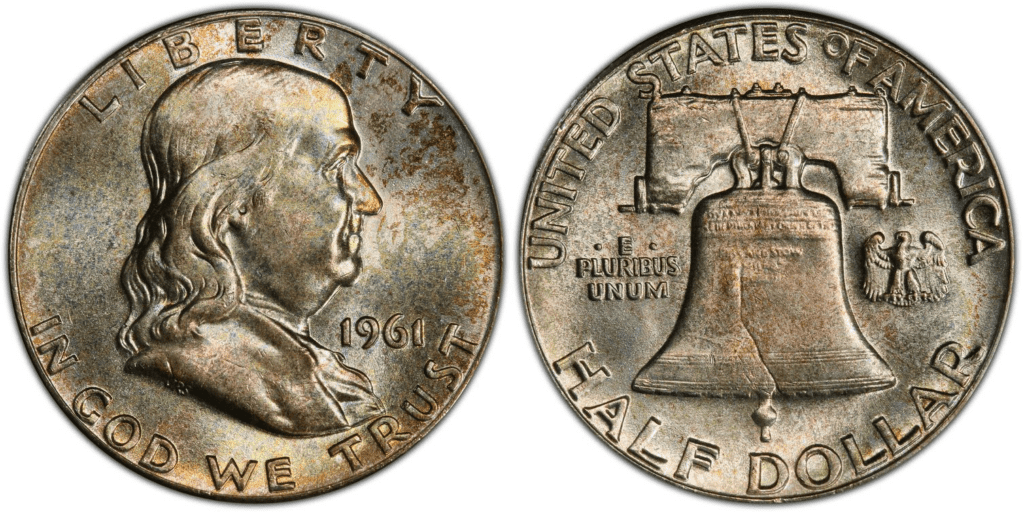 The Philadelphia Mint produced more than 8.2 million of 1961 half-dollar coins.

Some of the rarest 1961 no-mint mark half-dollar coins are the ones with Full Bell Lines on the reverse. Today, there are no 1961 P 50-cent coins with a grade higher than MS-66. 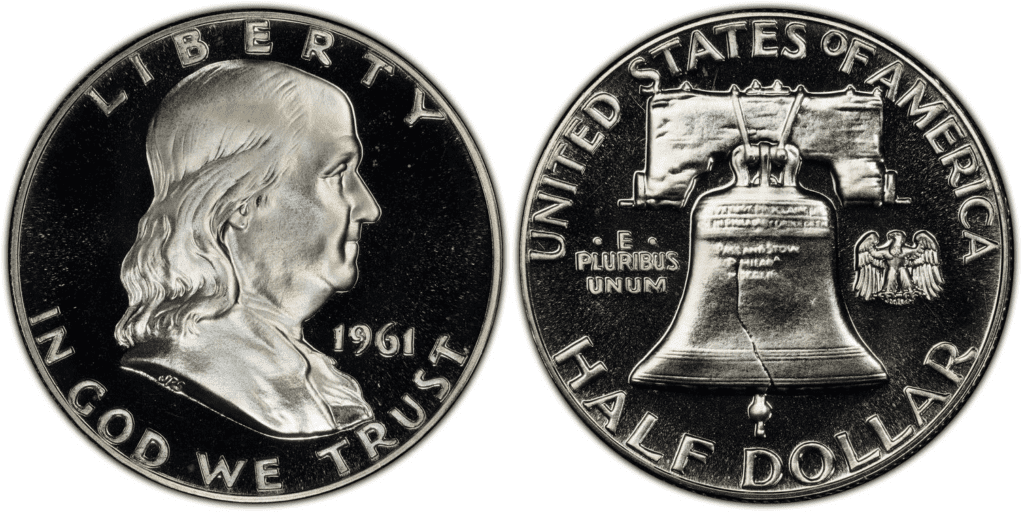 Today, 1961 50-cent proof coins are fairly common. However, proof coins with deep cameo and full cameo surfaces are difficult to find. If you have this kind of proof coin, you may be able to sell it for a few hundred dollars. Nevertheless, the average selling price of 1961 half-dollar coins is $0.50 to $22.

In 1961, there were a total of more than 31.5 million Franklin half-dollar coins produced by the US Mint. With so many coins produced, it’s not surprising to find error coins for this series.

There are different reasons that errors may happen, which include mint striking errors, die errors, and planchet errors. All these are related to the wear and tear of the minting equipment. As you can imagine, producing hundreds or thousands of 1961 half-dollar coins daily could inevitably lead to errors.

In mint striking errors, the die is calibrated accurately to ensure that it is strong enough when it strikes the planchet. If the strike is too weak, engraved materials won’t be too pronounced.

Sometimes, a strike can also be off-center or too broad, making the engraved elements to be in the wrong angle.

There’s also a common error in the 1961 Franklin half-dollar series. This is called the doubled die reverse (DDR) or doubled die obverse (DDO). This error happened when the die struck the planchet twice. Because of this, engraved elements may have doubled in appearance. 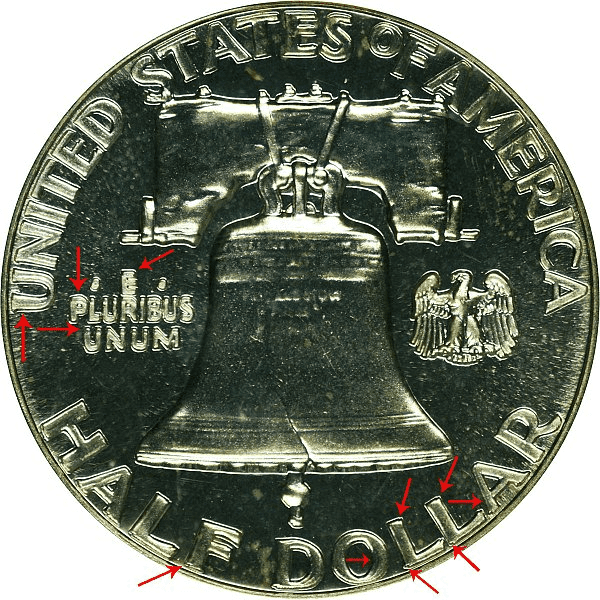 The next type of error is the die error. The die strikes planchets multiple times. Because of this, the die may break. A broken die has cracks in it. When the broken die strikes the planchet, the die leaves a cracked mark on the coin.

For the planchet errors, the coin is not properly cut. It may have a clipped edge, or it is too thick or thin.

While it is true that coin errors are something unintentional and should be avoided at all costs, most coin collectors are more than happy to buy error coins. The reason is that error coins can be valuable because of their rarity and unique condition.

How Much Is 1961 Franklin Half Dollar Worth Today?

While the face value and melt value of the 1961 half-dollar coin aren’t that big, you would be happy to know that there are coins in this series that are more valuable.

Check out this 1961 Franklin Half Dollar values chart to learn more about its prices:

As you can see, there are still 1961 half dollars that can be worth hundreds of dollars. However, according to Professional Coin Grading Service (PCGS), their records show that the most expensive 1961 half dollar ever sold is the 1961-D half-dollar coin with a grade of AU53. It was sold for $5,290 during an auction held by Bowers & Merena in September 2002.

Where To Buy Or Sell 1961 Franklin Half Dollar?

The most common place to buy or sell the 1961 Franklin half dollar would be on the Internet. However, supplies may not be abundant anymore since this is an old issue. You have to give it a try and see its availability.

You can go to Amazon and eBay, which are the most popular websites where you can both buy and sell 1961 Franklin half dollar coins. You can also do a Google search to find websites that specialize in selling and buying 50-cent coins.

You might want to try coin shops, antique stores, and auction houses. These places are known to offer some of the rarest US coins.

Is a 1961 Ben Franklin Half Dollar made of silver?

The 1961 Benjamin Franklin half dollar is made of silver. Specifically, it is made of 90% silver and 10% copper.

Are the words “E PLURIBUS UNUM” on a 1961 Franklin half dollar super rare?

The E PLURIBUS UNUM on a 1961 Franklin half-dollar isn’t super rare. The US motto, which means “Out of many, one,” is a standard part of the engraved elements on the coin.

Benjamin Franklin, the sixth president of the United States, is the person whose image is found on the 1961 half dollar. His bust also appears on the half dollars issued from 1948 to 1963.

6 Most Expensive Camaros Ever Sold