The US Mint has been producing the Lincoln penny for more than 100 years, and is being issued even today. With that in mind, there’s no doubt that old Lincoln pennies are more valuable than modern pennies.

As time goes by, the value of pennies increases. Also, wheat pennies are even more valuable because they are older than the ones with the Lincoln Memorial on their reverse.

The Lincoln penny was first struck in 1909. Victor David Brenner prepared the original design. He designed both the obverse and the reverse side of the coin. The reverse featured two stalks of wheat, thus the nickname “wheat penny.” However, by 1959, the wheat was replaced by the Lincoln Memorial. 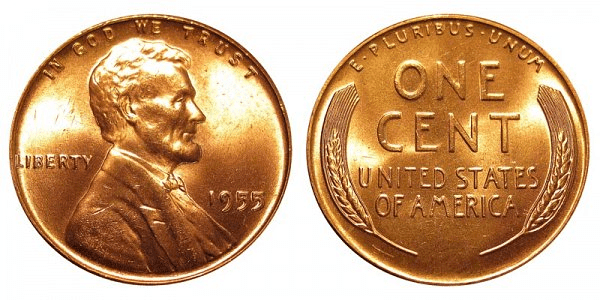 The design of the 1955 Lincoln penny was relatively simple. It has the image of Abraham Lincoln facing to the right side. Inscriptions include IN GOD WE TRUST, LIBERTY, and 1955.

On the reverse side, you have the two stalks of wheat engraved on the left and right sides. You then have the inscriptions, which include E PLURIBUS UNUM, UNITED STATES OF AMERICA, and ONE CENT.

In 1904, the President at that time, Theodore Roosevelt, asked Leslie Mortier, the Secretary of the Treasury, to make some improvements to the US coins. According to Roosevelt, US coins lack an artistic look and must be changed.

That was when Mortier asked Augustus Saint-Gaudens to redesign the cent. Unfortunately, at that time, Saint-Gaudens was already sick with cancer. Regrettably, he didn’t finish the design for the cent. Thus, Brenner was tasked to complete the design.

Aside from the standard struck pennies, some error coins sporadically appear due to minting errors.

Here are the 1955 Lincoln penny varieties you should know: 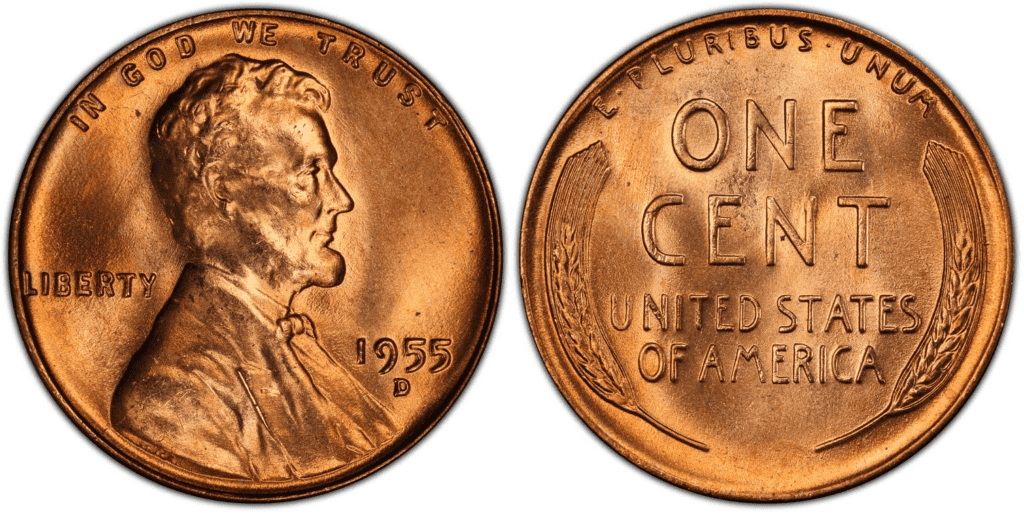 The Denver Mint produced more than 563 thousand 1955 D pennies, which is the highest mintage for this penny series.

The price range of the 1955 D penny is $0.01 to $8.00. While thousands of 1955 D pennies are produced, most are now damaged. That’s why you would have difficulty finding these coins in uncirculated conditions. The 1955 D penny became rare when it reached MS66 and higher grades. 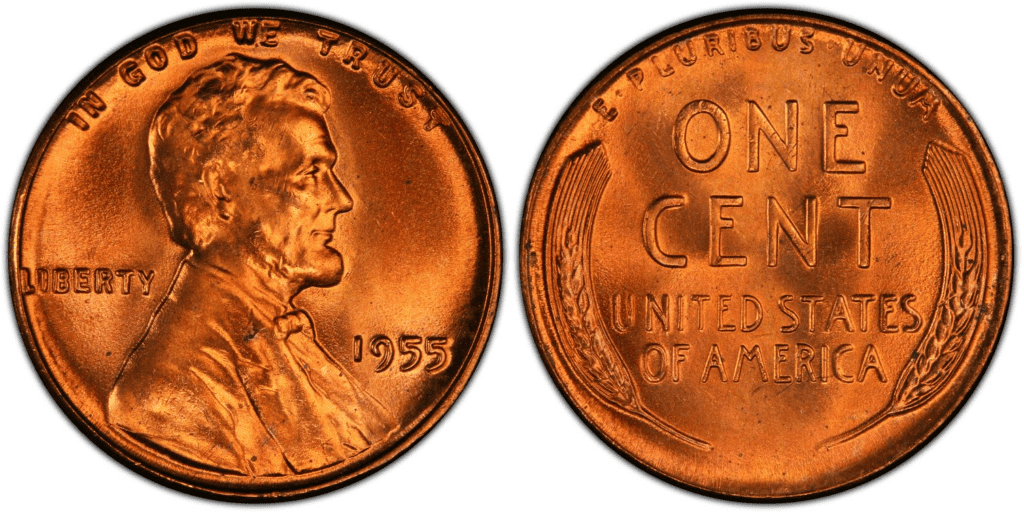 What’s worth noting about the 1955 wheat penny is that the quality control at that time was inferior. Because of a very tight budget, the three Mints, especially the Philadelphia Mint, were forced to use even severely worn dies.

This is the main reason that in 1955, many people were encouraged to save their beautiful 1955 P pennies because they would surely be worth a lot of money in the future. 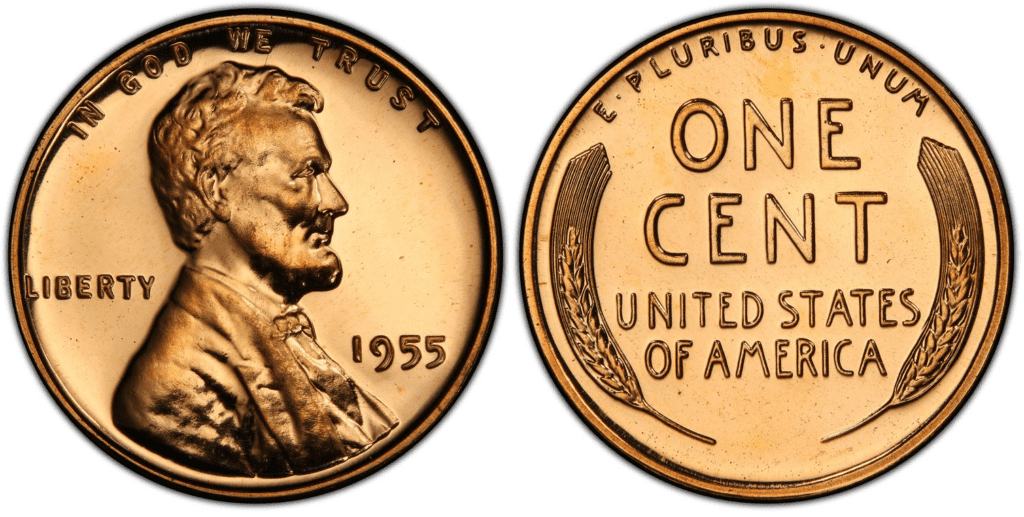 Proof coins are specially made with extra care. That’s why, if you compare the 1955 wheat penny-proof coins to other varieties, it usually has the best luster, detail, and color.

The Philadelphia Mint produced 378 thousand proof coins in 1955, which was very low compared to the mintage of the following year. Nevertheless, the 1955 penny-proof coins are actually among the most common proofs in the wheat cent series. PR68, PR69, and PR70 are tough to find. 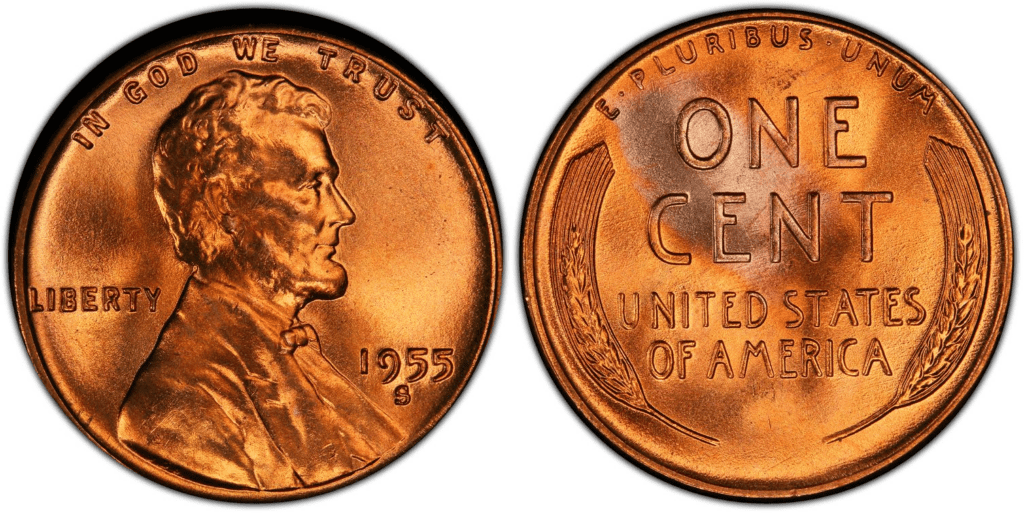 The San Francisco Mint produced more than 44 million wheat pennies in 1955. Price may range from $0.01 to $12. With a large mintage, the 1955 S penny can easily be found in circulation today. However, 1955 S pennies in MS65 to MS66 are relatively scarce. Some examples with MS67 and MS68 should also be available but difficult to find.

With almost 1 billion 1955 Lincoln produced, it is not difficult to imagine that there will be error coins.

Perhaps, the most commonly identified error in the 1955 series of Lincoln penny would be the doubled die obverse (DDO) error.

In this error, the die hit the planchet twice, leaving a doubled effect on the engraved elements. Not all DDO errors are prominent. Some of them can be difficult, and you might even need a magnifying glass or microscope to find them. 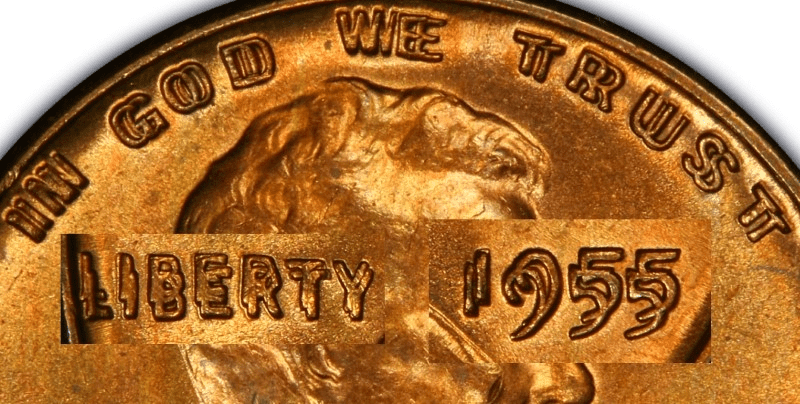 Some of the most expensive 1955 pennies have the DDO error. The more prominent the error is, the more expensive it becomes.

If the doubled die error is in the reverse, it is called DDR. Moreover, other errors affected the 1955 wheat Lincoln pennies. Here are the examples:

How Much Is The 1955 Lincoln Wheat Penny Worth Today?

The 1955 Lincoln Wheat penny is worth 1 cent, as its face value shows. Its melt value is $0.0253. If your penny is in Average Circulated (AC) condition, you might as well get 18 cents from it. Certified pennies could bring you as much as $22.

You are probably correct if you think that’s not a lot of money. However, you would be surprised how some 1955 Lincoln pennies are worth astronomically a lot compared to their face value or melt value.

Here’s a 1955 Lincoln Wheat Penny values chart to help you know its pricing:

As you can see, some 1955 wheat pennies are valued in the thousands. To further give you an idea of how much a 1955 Lincoln penny can be, check out these auction records for each variety:

Where To Buy Or Sell 1955 Lincoln Wheat Penny?

You can buy or sell 1955 Lincoln wheat pennies online and offline. Many websites today will quickly give you results for the coin you’re looking for today.

Aside from the Internet, you can visit coin shops, pawnshops, antique stores, and auction houses. All these places are known to buy and sell pennies and other coins.

There are different rare 1955 pennies today. Perhaps, the rarest would be the 1955 1C Doubled Die Obverse, RD (Regular Strike). Unfortunately, this penny comes with a prominent DDO error, which rarely happens during minting.

How many 1955 doubled die wheat pennies are there?

According to estimates, about 40,000 1955 doubled die wheat pennies were produced in just one night. As a result, about 20,000 to 24,000 coins entered circulation. Although there are many doubled-die errors, only a few have a prominent and obvious appearance of doubling.

The 1955 penny with a doubled die error is among the most expensive types of the 1955 penny.