The Lincoln penny is perhaps the most popular coin in the United States. Not just because of how much it is used in everyday life but because it has been in circulation since 1909.

The 1954 Lincoln penny is made of 95% copper and a 5% mixture of tin and zinc. The value of the penny is 1 cent. It has a mass of 3.11 grams, heavier than pennies today. However, the diameter of the coin stays the same at 19.05 mm. The edge has always been plain and not reeded. 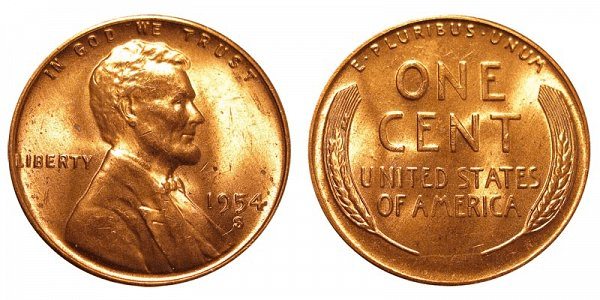 Victor David Brenner originally designed the Lincoln penny. On the obverse, you’ll find the bust of Abraham Lincoln, the sixteenth president of the United States. Inscriptions include the following:

On the reverse, you’ll find two stalks of wheat on both sides of the coin. Inscriptions include the following:

Aside from the standard varieties, there are also some error coins that made it to circulation.

Here are the 1954 Lincoln penny varieties that you should know: 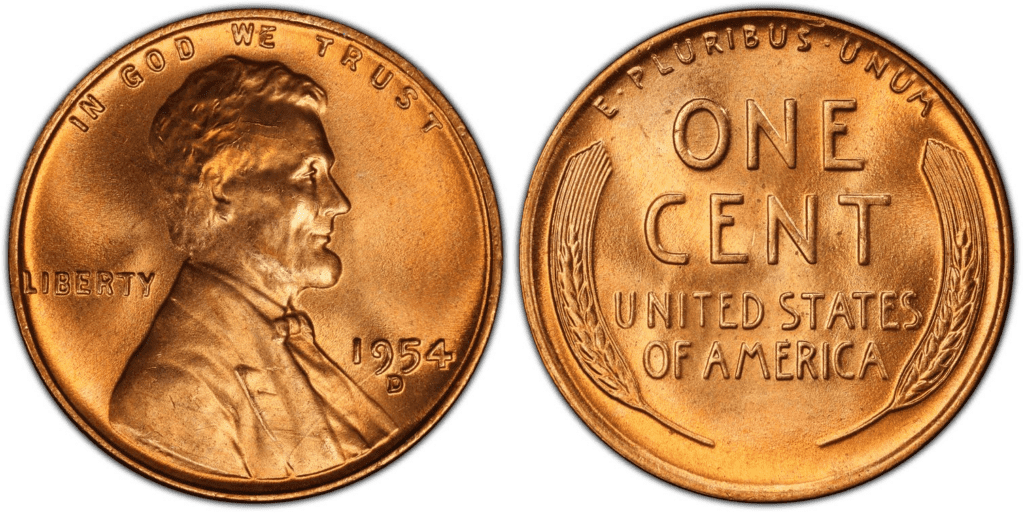 Because of the high mintage of 1954-D pennies, they can still be seen in circulation today even if decades of years have already passed. Coins in MS64 condition can be easily found from rolls. Even coins in MS65 and MS66 should reasonably be available. On the other hand, the 1954-D becomes super scarce in MS67 conditions. There might probably be under 100 of these MS67-graded penny coins today. 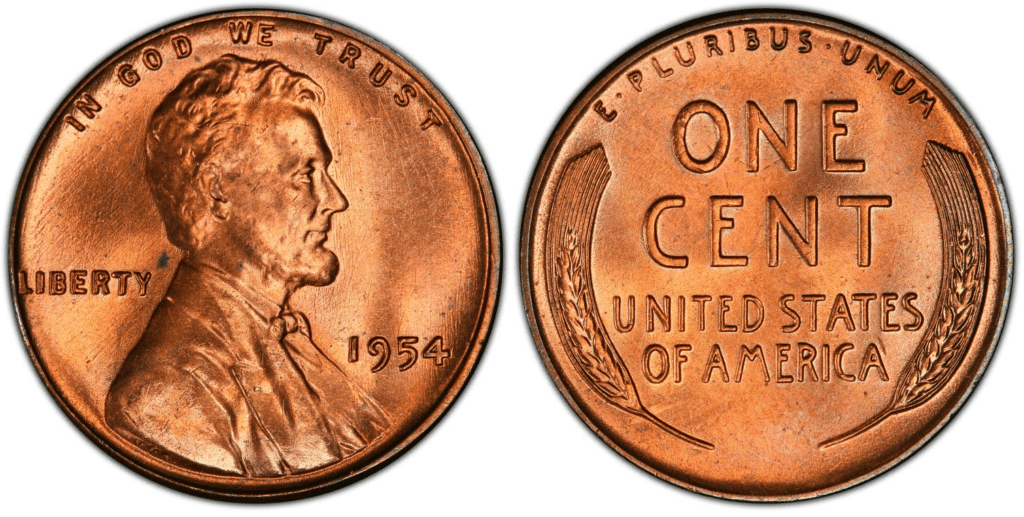 The Philadelphia Mint produced more than 71 million Lincoln pennies in 1954. Its price can start from $0.01 to $14.00. Rare and unique coins can be more expensive.

It’s worth noting that the mintage of the penny in 1954 drastically fell. In 1953, the Philadelphia Mint produced more than 256 million. Compare that to the 71 million in 1954.

Some numismatists noted that the 1954-P was struck poorly. This is because the Mint used worn-out dies. That’s why 1954-P pennies with a grade of MS67 are extremely rare. 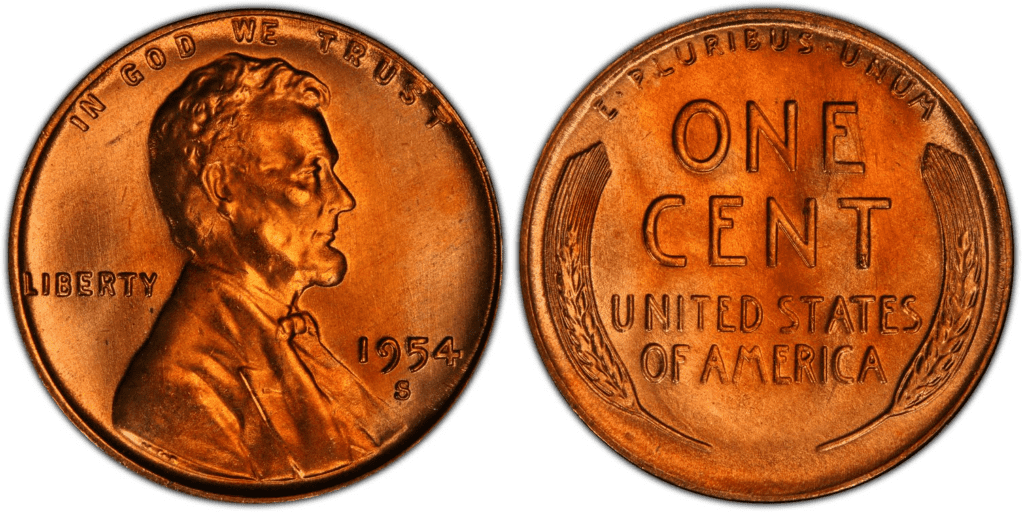 In 1954, San Francisco’s Mint produced poorly struck Lincoln 1-cent coins. Quality control wasn’t so good, and worn-out dies were used. This was the main reason that there are a lot of 1954-S pennies that look blurry. 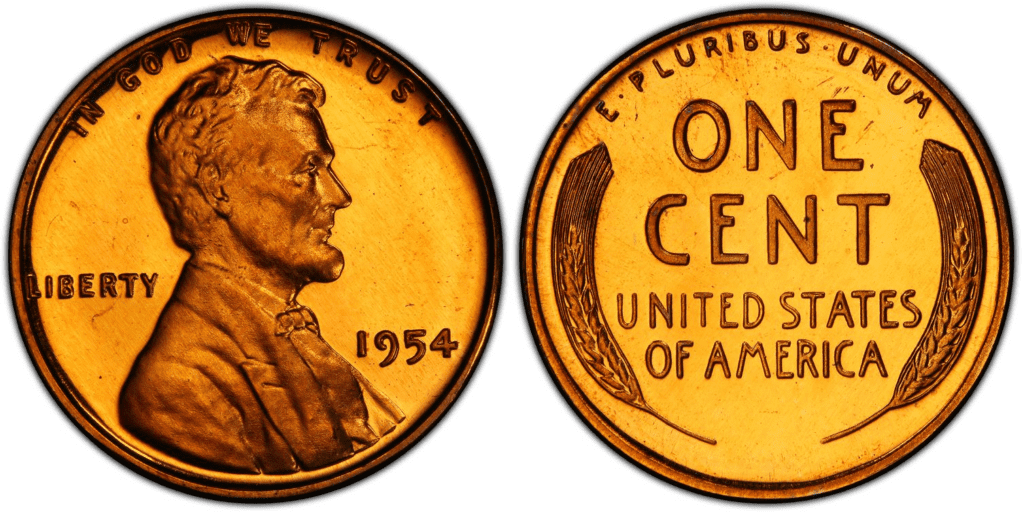 As you can see, there are only more than 233 thousand proof pennies. This tells you that there was a low demand for proof coins in 1954. Nevertheless, because only a few are made, there’s also a low demand, leading to their value increasing even more.

With more than 419 million 1954 Lincoln pennies, it’s just a matter of time before some coins will be made with errors. Although the US Mint doesn’t want to have error coins, many coin collectors would love to have them.

As mentioned above, the pennies struck in Philadelphia and San Francisco were poorly struck. As a result, there are a lot of 1954 pennies with blurry and smudged appearances, even if they just entered circulation.

One interesting error you might want to note is the 1954 S Lincoln wheat penny “BIE” die break error. In this error, the die broke between B and E in the word “LIBERTY.” 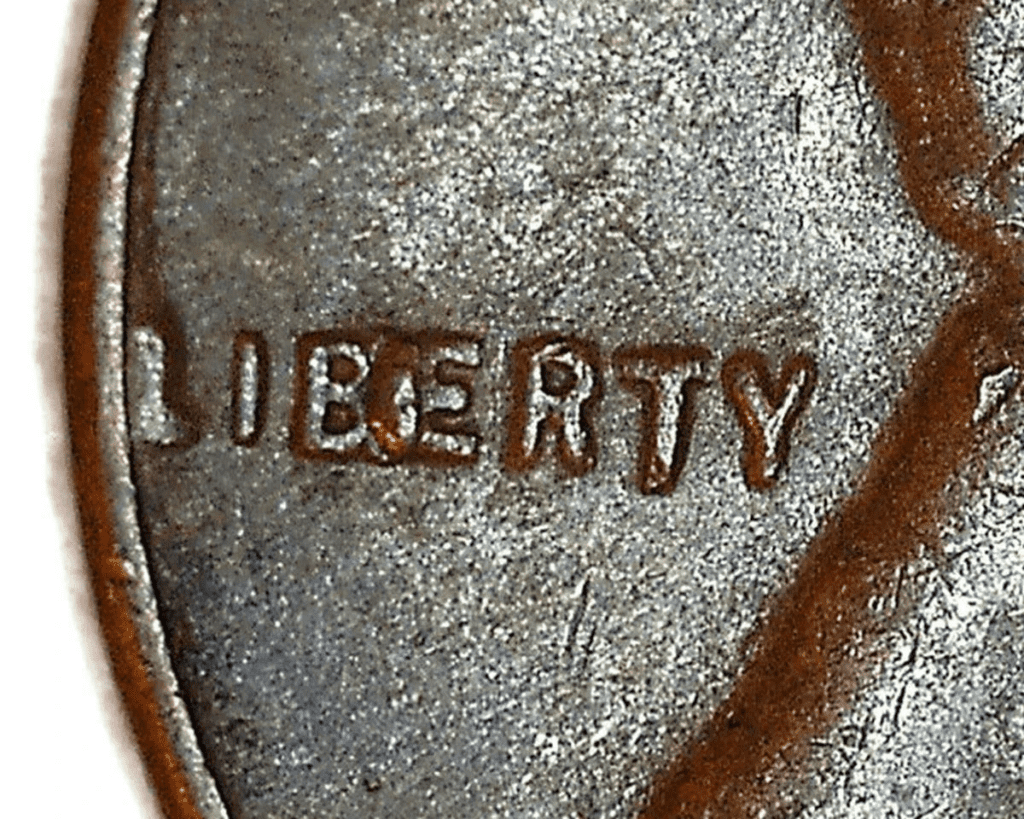 So, there’s an extra letter I between the B and the E.

How Much Is the 1954 Lincoln Penny Worth Today?

You might think the penny isn’t worth anything after knowing its face value and melt value. Nevertheless, don’t lose heart. Did you know there are still 1954 Lincoln wheat pennies worth hundreds and even thousands of dollars?

Take a look at this 1954 Lincoln Penny values chart to learn more about its pricing:

As you can see, some 1954 pennies are just so valuable. To get an idea of their potential value, take a look at the auction records of each of the 1954 wheat penny varieties:

Where To Buy Or Sell 1954 Lincoln Penny?

If you want specific websites, then you can be sure that Amazon, eBay, and Etsy would be among the options. There are also websites that specialize in buying and selling Lincoln pennies. Examples would be JM Bullion, USA Coin Book, and CoinTrackers, to name a few.

Of course, the Internet is not the only place for you to buy or sell 1954 Lincoln 1-cent pennies. You can also go to antique shops, pawnshops, and coin shops. Try to join auctions as well.

The 1954 penny isn’t rare, especially if you’re looking for circulated coins. However, 1954 pennies with grades of at least MS68 or PR68 are rare since only a few of them are known to exist today.

The most common error of the 1954 D wheat penny would be the die break. Other errors include off-center strikes, planchet errors, and doubled die strikes.

Circulated 1954, no mint penny would only be worth a few cents. However, if you have a 1954 no mint penny, which is still in good condition and has a rare attribute, then you can sell that for a few hundred to even a thousand bucks.