What Is the 1955 Jefferson Nickel Made Of?

The 1955 Jefferson nickel is a popular coin for many collectors today. Although the face value of this coin is just 5 cents, some come with a high collectible value.

Some nickels were called “Wartime NIckels,” issued from mid-1942 to 1945. These nickels were then made of 56% copper, 35% nickel, and 9% manganese. The change was brought about the World War II since copper and nickel were vital raw materials to win the war.

The artist Felix Schlag designed the first Jefferson nickel after winning the design competition. His nickel design was used from 1938 to 2004 when a new design by Joe Fitzgerald replaced it.

Fitzgerald’s design didn’t last long, as it was quickly replaced by Jamie Franki’s new Jefferson design in 2006. Interestingly, Schlag’s reverse design remained untouched except in 2004 and 2005, when the coin bore commemorative designs. 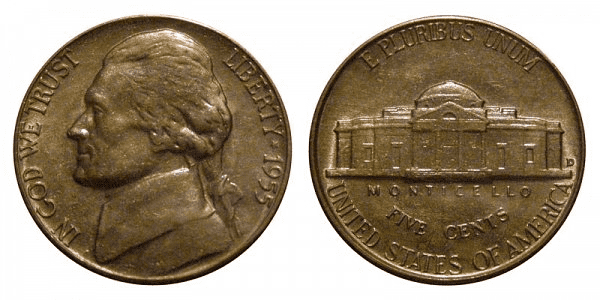 As you can imagine, the Jefferson nickel features the left profile of Thomas Jefferson, the 3rd president of the United States and one of its founding fathers. Inscriptions include the following:

On the reverse, you’ll find the Monticello mansion, owned and even designed by Jefferson himself. The inscriptions include the following:

First struck in 1938, the Jefferson nickel replaced the Buffalo nickel. Although the buffalo nickel looks impressive and beautiful, it is challenging to mint. In addition, its die could easily break, so when the time finally came for the US Mint to replace the Buffalo nickel legally, they chose Thomas Jefferson to grace the 5-cent coin.

The 1955 Jefferson nickel comes in three standard varieties. These are the 1955-D, 1955-P, and 1955-P proof nickels. In 1955, only the Philadelphia and Denver mints were operational. The San Francisco Mint stopped producing nickels. This led to a low production of nickels in that year.

Aside from the standard varieties of the 1955 Jefferson nickels, some have errors, giving rise to a different type of coin.

Here are the 1955 Jefferson nickel varieties that you should know: 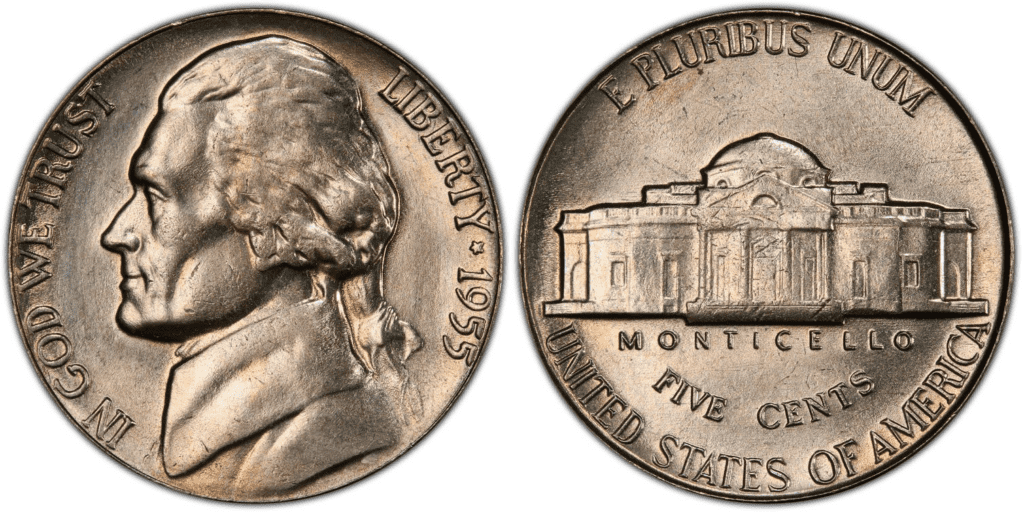 The 1955-P Jefferson nickel was struck in the Philadelphia Mint, and more than 7,888,000 of these coins were produced. As you can see, this is among the lowest mintage figures of nickel in its entire history. Just compare it to the mintage of 1954, which is more than 47 million, and 1946, which is more than 35 million.

Nevertheless, if there’s a low mintage for a particular coin, its value would usually go up since there’s a smaller supply. That’s why a 1955 P nickel can range from  $0.05 to $60.00. Some are even more expensive when sold in the open market.

It’s worth noting, though, that the 1955-P is poorly struck. So, it would be difficult to find a 1955-P nickel in MS66 and higher condition. 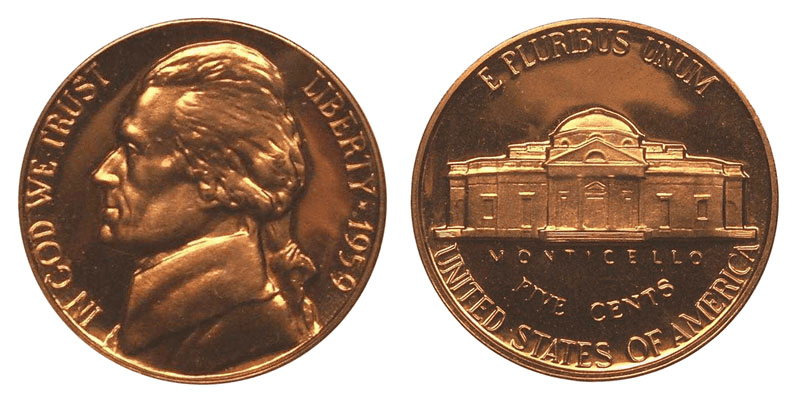 The 1955-P proof Jefferson nickel was also struck in the Philadelphia Mint. At the end of 1955, there were more than 378 thousand P-proof nickel coins.

The mint mark is absent, which is expected for coins struck in the Philadelphia Mint. The average price ranges from $0.05 to $72.00.

Because proof coins are not meant for circulation but for collectors, you will notice that it has low mintage. As a result, there’s a higher demand among collectors for these coins.

The most sought-after 1955-proof nickels would be the one with a grade of PR69 and a deep cameo surface.

In 1955, the proof nickel came in a new pliofilm packet and was shipped in an envelope. This has improved the preservation rate of the coin. 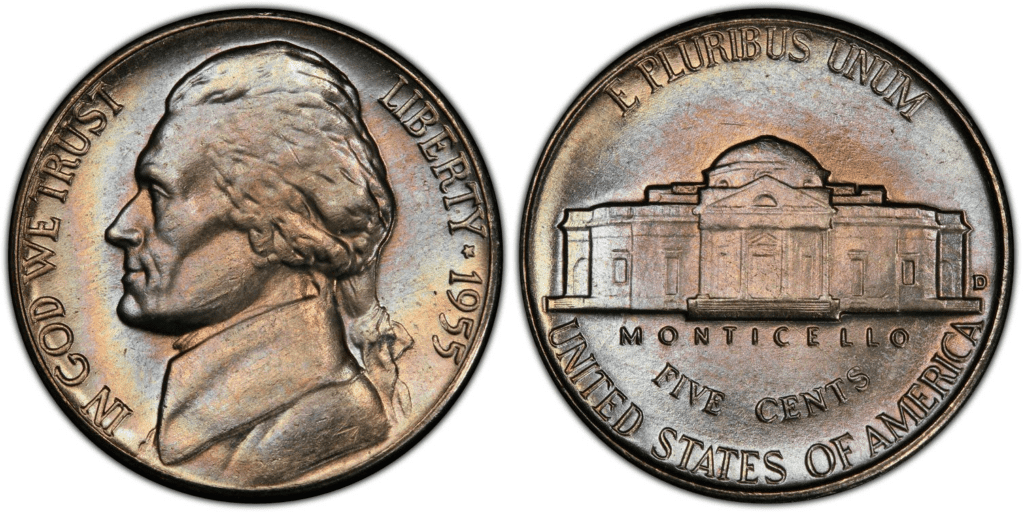 The 1955-D proof Jefferson nickel was struck in the Denver Mint. The Denver Mint produced the most 1955 nickels, reaching more than 74 million.

Unlike the Philadelphia Mint, the Denver Mint added a mint mark to the coins it produced. As a result, you’ll find the “D” mint mark between the right side of the Monticello and the edge of the coin. The D mint mark signifies that the coin was struck in the Denver mint. The average price ranges from $0.05 to $13.00.

While the US Mint issued only 74 million 1955 D nickels, you can still find them in circulation today. Nevertheless, they instantly become scarce in grades equal and higher to MS65.

Overall, the 1955 D nickel is generally more appealing than the nickels struck in Philadelphia.

With more than 82 million copies, the 1958 Jefferson nickel couldn’t escape the fact that coins could have errors. That’s why, like any other coin series, the 1955 nickels have their fair share of error coins.

Perhaps, the most common intended error is the D-over-S mint mark. Unfortunately, as you can remember, the San Francisco Mint stopped its operation. Thus, it has some unused reverse dies.

Instead of throwing away these precious dies, the US Mint reused them. However, to do this, they had to remove the S mint mark of the die. The problem was that you couldn’t simply erase the mint mark. So instead, the D mintmark of the Denver Mint was directly overpunched to the S mintmark. This leads to the D over S variety of the 1955 nickel. 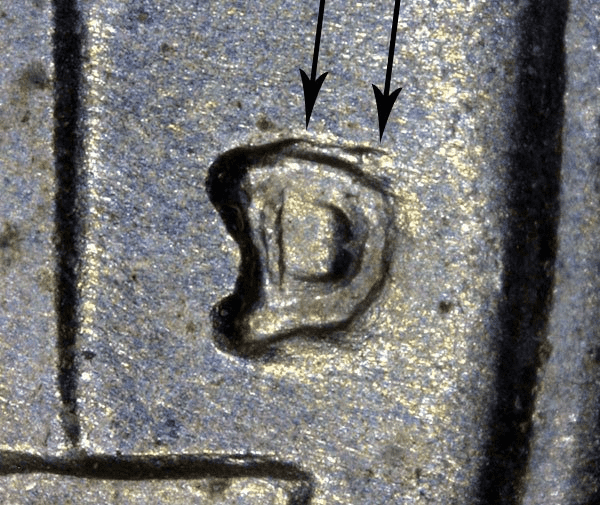 The error isn’t that obvious, but if you look closely, you can still see some portion of the “S” mintmark.

Aside from the D over S mintmark error, the nickel also had a fair share of the common coin errors.

For example, some coins also have planchet errors where the coin has a folded or clipped edge. Strike errors also happen when the die struck the coin twice, the strike is weak, and the strike is hit through a foreign material.

How Much Is The 1955 Jefferson Nickel Worth Today?

As you can imagine, if you rely on its face value and melt value, you won’t get much from the 1955 nickel. However, this coin can be worth more if it’s still in good condition and has some rare attributes.

Here’s a 1955 Jefferson Nickel values chart that should give you more details about its pricing:

You can see here that the 1955 nickel could sell for hundreds and thousands of dollars. To help you better understand how much the 1955 nickels were sold in the past, take a look at these auction records:

Where To Buy Or Sell 1955 Jefferson Nickel?

Some websites specialize in selling and buying US coins. You can find them by just doing an Internet search. Some examples would be USA Coin Book, Coin Trackers, and JM Bullion.

If you’re not a fan of the Internet or can’t find what you’re looking for online, you can try antique stores, coin shops, pawnshops, and auction houses.

Is there anything special about a 1955 nickel?

The 1955 nickel becomes special when it is still in great condition. Moreover, in 1955, there were coins struck in Denver with a D over an S mintmark.

How much is a 1955 nickel worth with no mint mark?

The 1955 nickel is only 5 to 10 cents in value if it is in circulated condition. However, 1955 nickels with grades of at least MS67 or PR68 could be worth hundreds or thousands of dollars. 1955 nickels with a Full Step rating are even more valuable.

You can be confident that the 1955 nickel is not silver. The 1955 five-cent coin is instead made of copper and nickel.