What Is the 1948 Roosevelt Dime Made Of?

The 1948 Roosevelt dime is among the US’s most beloved and popular coins. It was first struck in 1946 to replace the Mercury dime. Since then, the US Mint has continued to issue the Roosevelt dime.

If you’re looking for a silver coin to add to your collection, then the 1948 Roosevelt should be on top of your list. It has 90% silver content, and the rest is copper. Its silver fineness level is 0.9, while its actual silver weight (ASW) is 0.0723oz. The same composition was used until 1964.

By 1965, the US Mint needed to remove silver content from the Roosevelt dime to lower the cost of producing coins.

The Roosevelt dime has a face value of 10 cents, a mass of 2.50 grams, and a diameter of 17.90 millimeters. A fun fact: the dime is currently the smallest coin in terms of diameter and thickness. 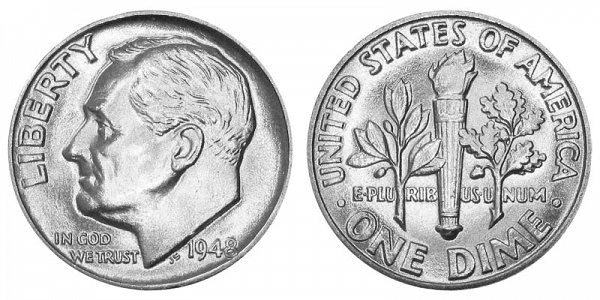 When it comes to design, you’ll find the face of Roosevelt on the obverse. Inscriptions include LIBERTY, IN GOD WE TRUST, and 1948.

Itprettyite interesting how the US Mint chose the dime to be the coin that will feature the face of Roosevelt. You see, Roosevelt was ill with polio. As someone who has experienced the disease firsthand, he spearheaded the formation of the March of Dimes, which is a nonprofit organization that improves the health of mothers and babies.

The primary method of the organization in collecting funds is asking every individual to contribute 10 cents, which can easily become a considerable amount if many people contribute.

On April 12, 1945, President Franklin D. Roosevelt passed away. Many people loved him as he was the president who took the reins of the US and led it through the Great Depression and World War II. As a way to honor the beloved president, the lawmakers acted fast to add him to one of the coins of the US.

The 1948 Roosevelt dime has three official varieties. These are the 1948-D, 1948-P, and 1948-S. During this year, no proof coins were produced due to cost-cutting, and the country was recovering from the war.

Aside from these standard-issued coins, some error coins give rise to a new variety.

To learn more, here are the 1948 Roosevelt Dime Varieties: 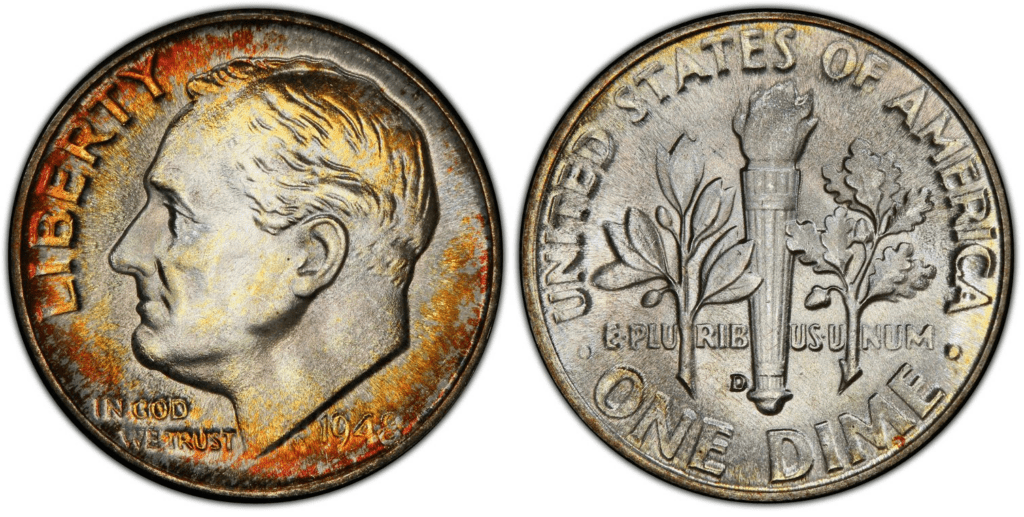 It should be noted that the 1948-D is considered to be the most well-struck variety compared to the other coins produced in San Francisco or Philadelphia. 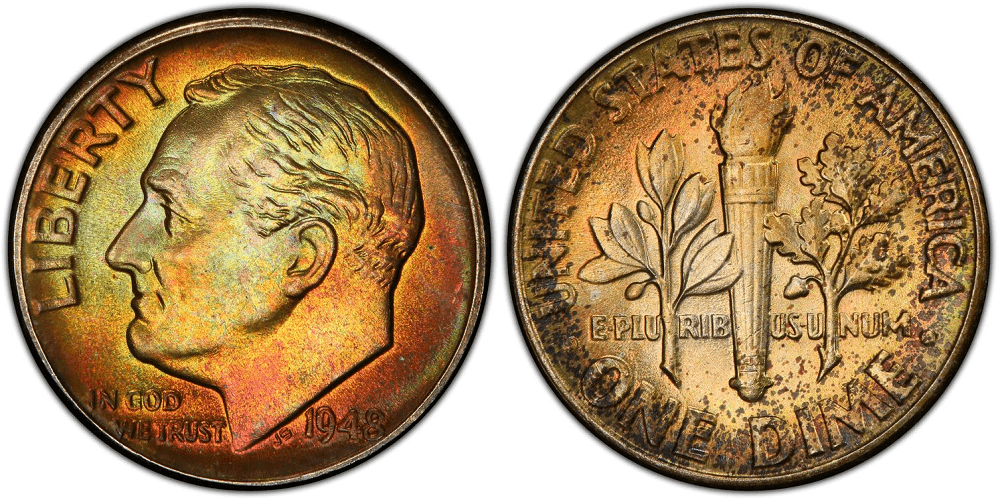 Due to the war and Great Depression, the dime’s mintage fell. However, because fewer dimes were produced in 1948, many speculators and collectors saved hundreds of BU dime rolls. Thus, today, many dimes are available up to MS66 grade.

If you’re looking for the most valuable 1948-P dime, you should look for the Full Band Prooflike coin. This coin has a detailed look of the Liberty torch. Not only that, but the coin looks like it was made like a proof coin.

Usually, this happens when the die is freshly polished. Because it is in its best condition, even if the Mint didn’t plan to make the coin look like a proof, it will look a proof because of the excellent quality of the die. 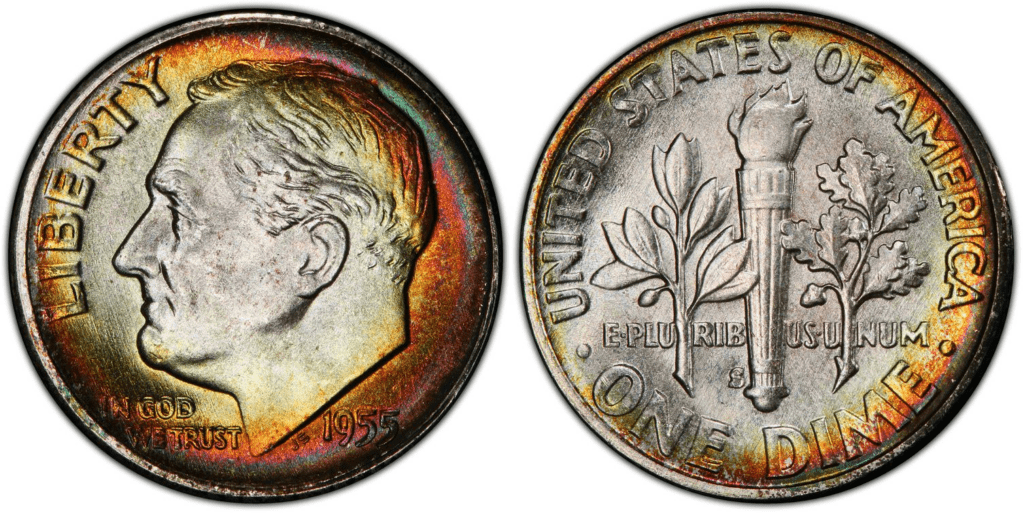 The San Francisco Mint produced more than 35 million 1948 dimes. At that time, perhaps, the most hoarded variety was the 1948-S. The S varieties of dimes are known to have a frosty and bright luster. Although this might sound wonderful, the peripheral elements near the coin’s edge are frequently shallow and distorted. This resulted in due die erosion.

There were more than 160 million Roosevelt dimes issued in 1948. As the country recovered from the war, almost all agencies, including the US Mint, needed to cut costs.

As a result, the 1948 Roosevelt dimes were produced with poor quality control. So, it should not be surprising to see some dimes have errors.

One of the most common errors of dime production in 1948 was the S over S repunched mint. The Denver and San Francisco Mint added a mint mark on the coins they produced. Sometimes, these mint marks are struck to the coin twice. So, if you look closely, you’ll see some doubling on the mint mark S.

Repunched Mint marks also happened in the Denver Mint. However, it was just minor, and only a few received this error.

Aside from that, there’s also the doubled die strike error. This happens when the die hits the planchet twice. Again, you’ll find doubling, especially on the inscribed letters.

How Much Is 1948 Roosevelt Dime Worth Today?

The 1948 Roosevelt dime has a face value of 10 cents. Its melt value is slightly higher at $1.7340, which is expected since the 1948 dime is made of silver. The melt value of the dime may increase (or even decrease) depending on the market value of silver.

Nevertheless, the actual value of the 1948 Roosevelt dime doesn’t lie in its face value or melt value. So if you have a rare 1948 10-cent or it is still in good condition, you could earn a lot from your coin.

Here’s a 1948 Roosevelt Dime value chart that you should go check out:

The 1948 Roosevelt dime is more valuable than you think. As you can see on the table, some were sold for hundreds and thousands of dollars.

You will begin to appreciate more the value of the 1948 Roosevelt dime when you read the following auction records for each variety:

Where To Buy Or Sell 1948 Roosevelt Dime?

As its face value shows, the 1948 S dime is worth 10 cents. However, its melt value is slightly higher, surpassing the one-dollar mark. Therefore, if you have a 1948 S dime with unique and rare attributes, you’ll surely be able to have a more valuable 1948 S dime. To give you an idea, the current auction record for a 1948 S is $4,465.

The mint mark on a 1948 dime is on the coin’s reverse side. Therefore, you should see a D or S on the left side of the Liberty torch’s tip.

The 1948 Roosevelt dime is worth around $5 for circulated ones. However, 1948 dimes with a grade of at least MS65 should be worth more.