What Is the 1953 Lincoln Wheat Penny Made Of?

The 1953 Lincoln Wheat Penny is made of 95 percent copper and 5 percent tin and zinc mixture. The pennies produced from 1909 to 1942 and 1944 to 1982 have the same metal composition. However, in 1943, the U.S. Mint struck Lincoln coins with zinc plated with steel. This was because, during the war, there were shortages of copper. 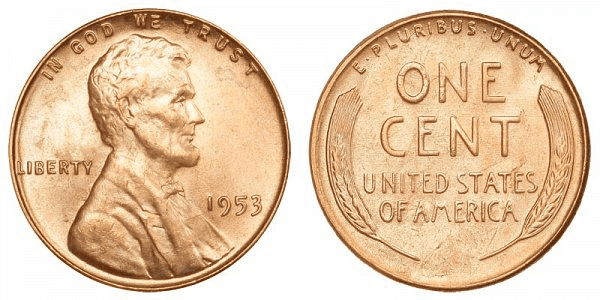 There is quite a story regarding the design of the 1953 Lincoln cents. At first, the coin’s design was a flying eagle created by sculptor Augustus Saint-Gaudens, but later on, then-president Theodore Roosevelt learned that by law, an eagle could not appear on the coin. So the coin had to be redesigned. But unfortunately, Saint-Gaudens became very ill and died without finishing the obverse design.

The inception of having Lincoln on the one-cent in 1909 happened when Roosevelt thought of honoring his fellow Republicans, as also was proposed by many citizens to the Treasury Department.

In the first month of 1909, the sculptor Victor David Brenner was commissioned for the coinage redesign to have Lincoln’s profile on the cent. The commemoration of his centennial birth anniversary was also in that same year, as he was born on February 12, 1809.

When it comes to the obverse (heads) of the 1953 Wheat Penny, you can see the bust of the assassinated 16th U.S. President Abraham Lincoln facing right. The inscriptions on this side include the following:

On the reverse (tail), Brenner designed two stalks of wheat placed on the left and right sides of the coin. The inscriptions also include the following:

Brenner depicted two ears of durum wheat on the cent at that time, making the one-cent coins known for ‘wheat pennies’ struck from 1909 to 1958. In 1959, Brenner’s wheat was replaced with the Lincoln Memorial, designed by Frank Gasparro.

Overall, the U.S. Mint produced more than 1 billion pennies of the combined varieties of the 1953 wheat penny and released these coins into circulation.

To learn more about these varieties of the 1953 Lincoln wheat penny, take a look at the below descriptions: 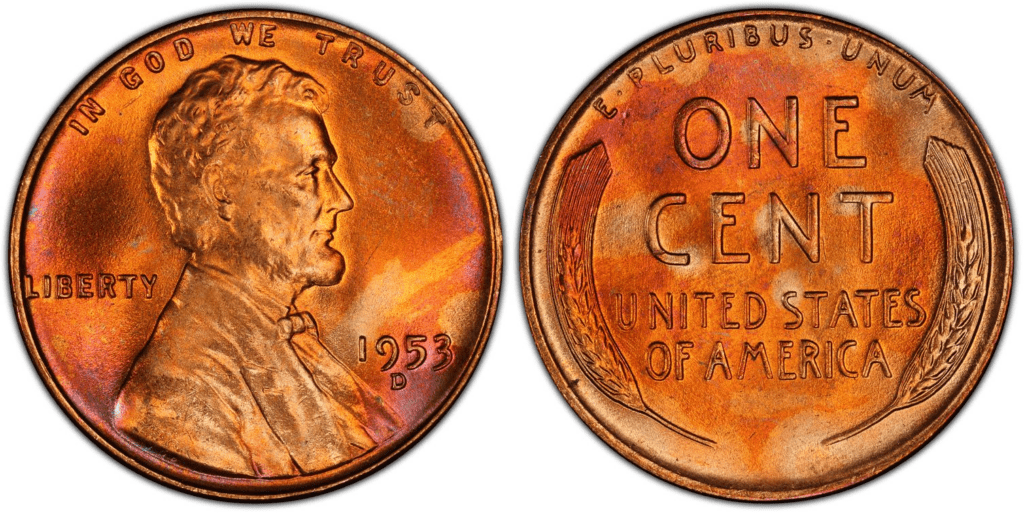 The Denver mint produced the most 1953 pennies, striking over 700 thousand coins. Of the entire series, the 1953-D coins are the 9th highest mintage of all date and mintmark combinations. Because of this, many rare coins were produced for this variety.

Many numismatists preferred the lightly circulated to full Mint State (like new) condition of this variety. Most of the 1953-D wheat pennies are still retaining their bright luster. 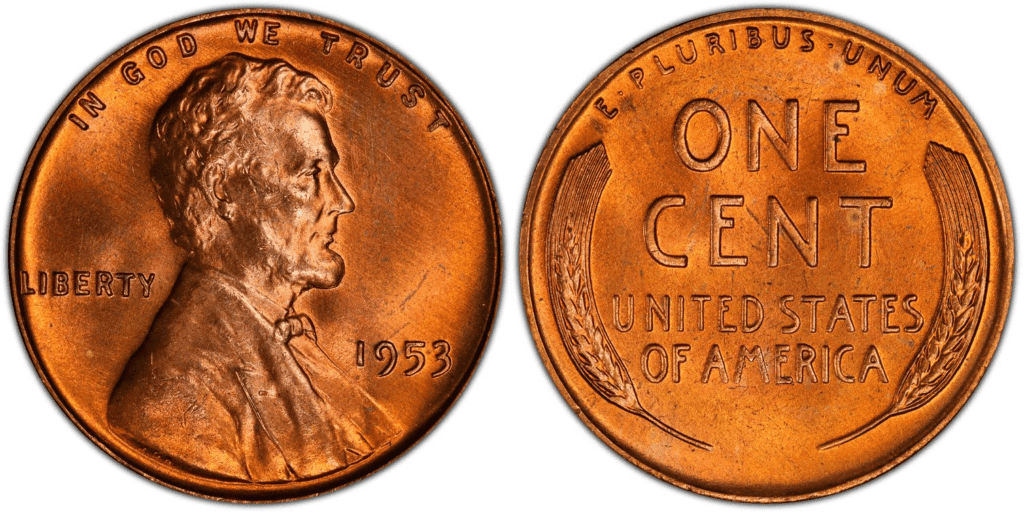 The 1953-P Lincoln cent is one the most challenging P mint marks, especially for its MS66 grades or higher. Approximately 400 – 500 MS66 Red (R.D.) Red samples exist. Issued MS66 coins between 1920 and 1958, like the 1953 wheat pennies, are hard to find. Meanwhile, the cents in MS67 Red condition are almost unheard of, perhaps with less than five samples.

For its MS65 condition, most existing samples were weakly struck with nicks and scratches. Unfortunately, most of these were already graded, and they began to be scarce. 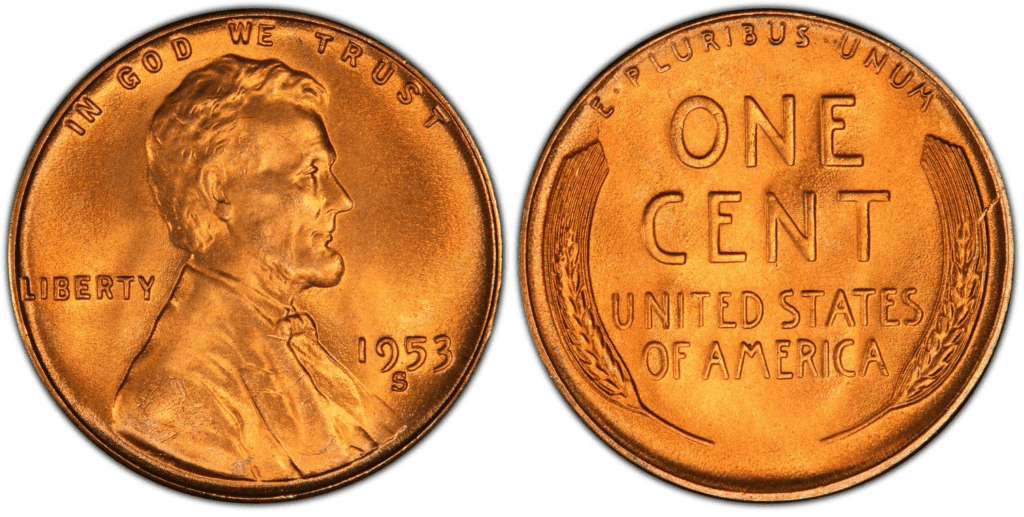 There are abundant rare grades for San Francisco wheat pennies (1953-S). The exceptional quality of the 1953-S should be worth a premium, specifically the ones with Red color. Albeit the fewest number of minted coins among the three mints, the 1953-S variety is still available in different grades. 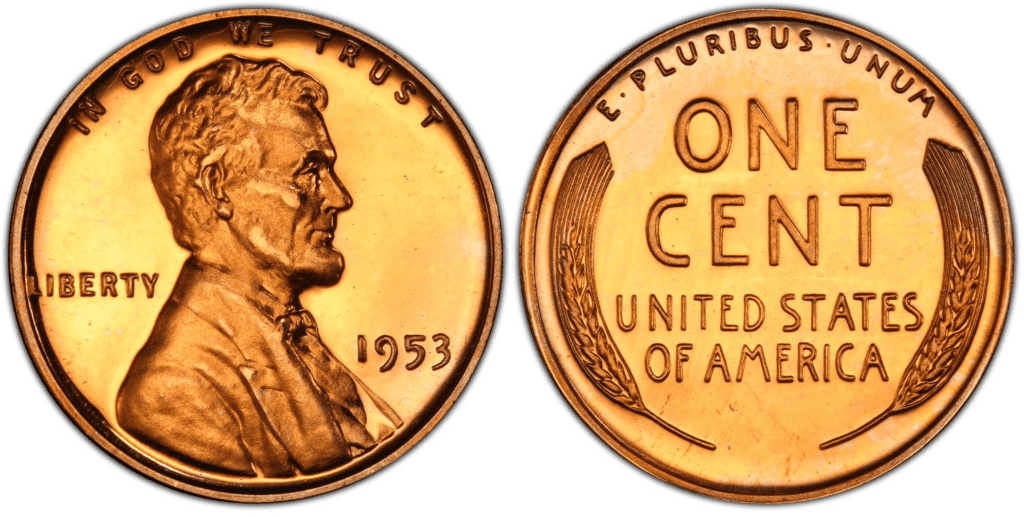 In 1953, the U.S. Mint made over 1 billion Lincoln Wheat Penny for circulation. Of this massive production, the equipment could be expected to have been overworked and deteriorated, which resulted in mint-made error coins.

Though these errors are mostly unintentional, the coins show some uniqueness and rarity. Distinct and special coins like these are valuable to many collectors as these are premium ones when sold.

Error coins that can be produced during the minting process are due to, but not limited to, the following:

Let’s take a look at a couple of 1953 Lincoln Wheat pennies below: 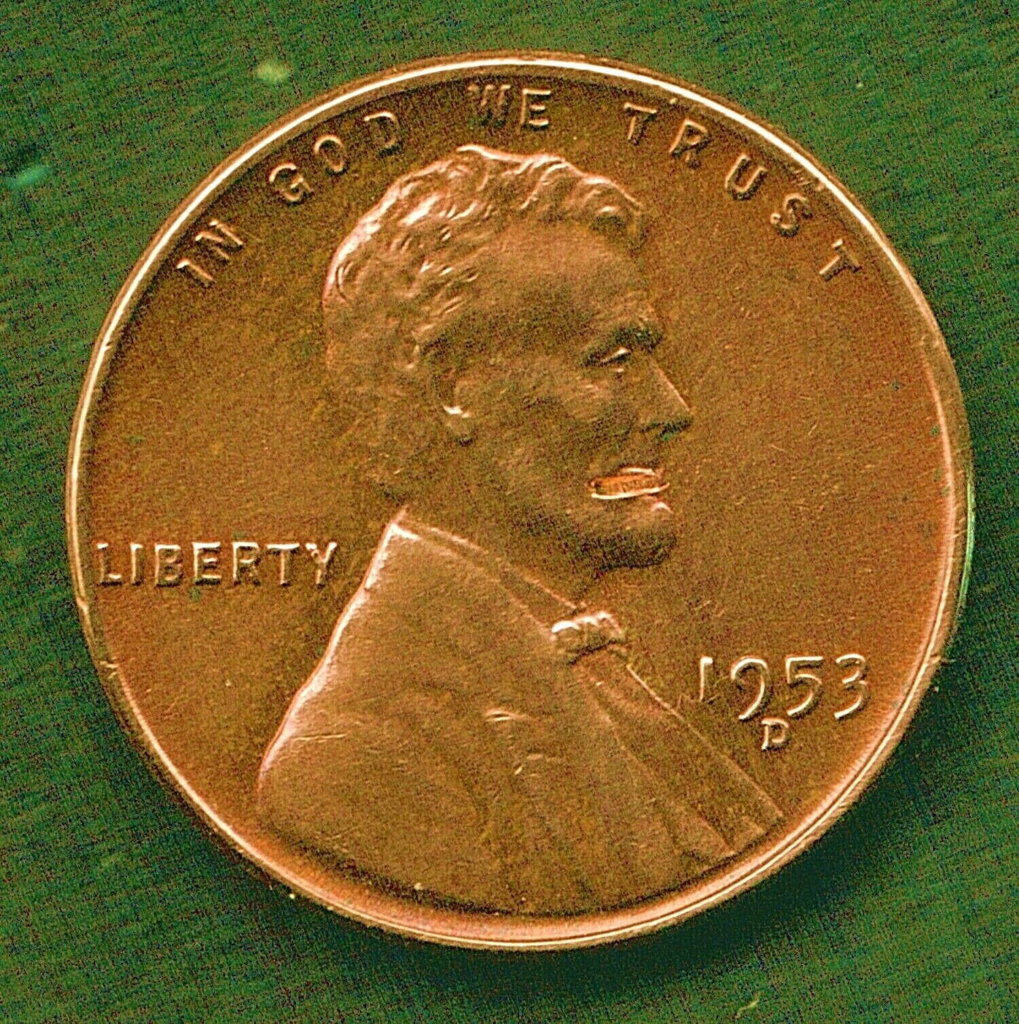 This sample above shows a die break on Lincoln’s teeth. Die breaks cross the bust’s face from rim to rim. It shows that one side of the break is slightly higher than the other. 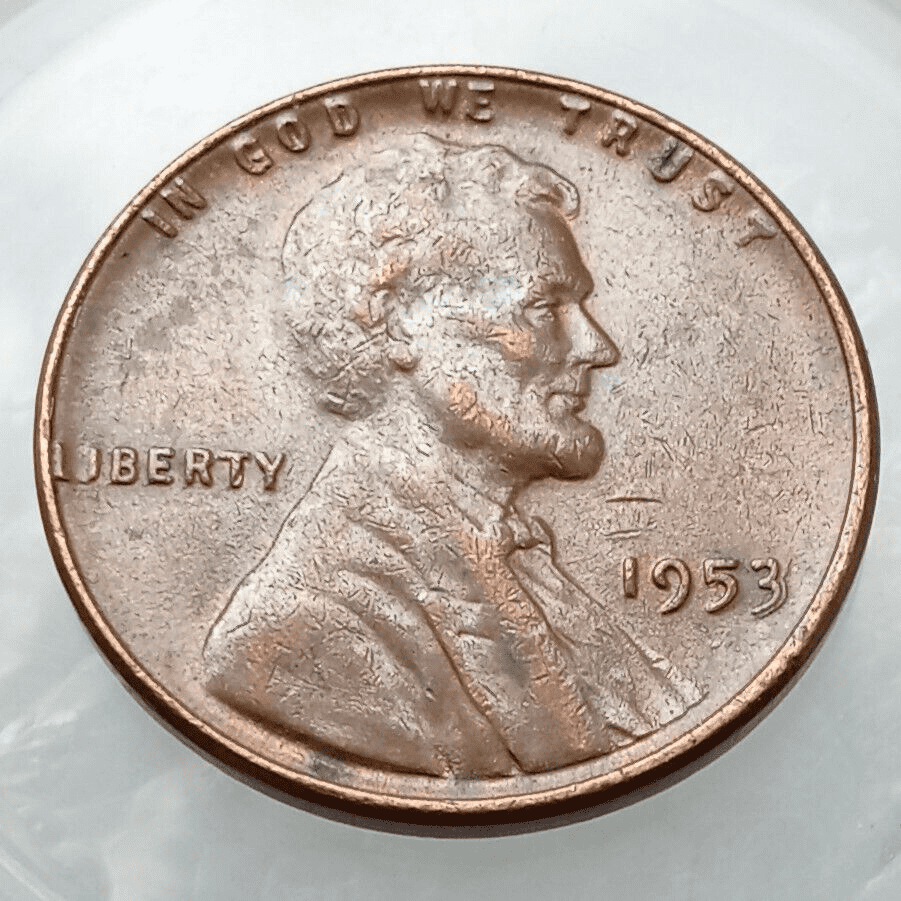 If you look at this sample, the error is on the 3 of the release year – 1953.  Usually, doubled die error (misspelling of double die) is visible to the human eye. When the die or hub misaligns during the hubbing process, it can create duplicate design elements. Doubled die strength varies from very light, isolated to extreme and widespread.

How Much Is the 1953 Lincoln Penny Worth Today?

As usual, the coin’s condition, grade, and rarity determine the value or worth of the 1953 Lincoln wheat penny. Its melting value is generally based on the value of the metals it is made of: copper, tin, and zinc.

The 1953 Wheat Penny is generally valued based on its minting types from three different mints – Denver, Philadelphia, and San Francisco. So, for example, you can take a look at the value of these 1953 Lincoln pennies below:

Where To Buy Or Sell 1953 Lincoln Penny?

Ah, this is easy! Online is your go-to place for selling and buying your 1953 Lincoln Wheat penny. The usual sites are eBay and Amazon. Some sellers are also offering the coins via Etsy.

Also, physical stores like antique stores and pawnshops are available if you like selling and buying offline. Other shops like coin shops and auction houses are your other options.

Professionals from PCGS and NGC can also be your consultants if you need advice on how and where to go about buying or selling your 1953 wheat pennies.

Known errors that occurred for some of the 1953 Wheat Penny are the following, but not limited to:

These error coins can be found on some selling sites, like eBay. Its cost depends on the condition and rarity in general.

It’s not easy to determine the value of your 1953 Lincoln Penny, though. Depending on its condition, you would know if your cent is worth a premium. Most collectors are meticulous regarding the “Grade” of a coin. The grading specifications you should consider are Uncirculated, Extremely fine, Fine, and Good (detailed above).

You can also bring your coin to PCGS and NGC to be professionally graded to get the overall value for your 1953 wheat penny.

Is there anything special about a 1953 penny?

If you own a 1953-S Wheat Penny, great for you! MS66 grades or higher are relatively special and scarce. The Redder, the rarer, and better too. These coins could be worth a premium when sold.