The fursona community has been popularly recognized since 1997 when the first conventions were held. Since then, the furry fandom has expanded the scope and quality of their work in materializing their personalities into wearable costumes to enhance the experience of their fetish.

People are now able to live in and as their fursonas in full fursuits.

This has led to the rise of luxury fursona costume commissions done by artists and puppet makers with an interest in the community. The online fursuit marketplace, The Dealers Den, has been the site of a lot of ultra-expensive fursuits that capture how expansive and immersive the fandom has become.

Continue reading to learn about the 10 most expensive fursuits. 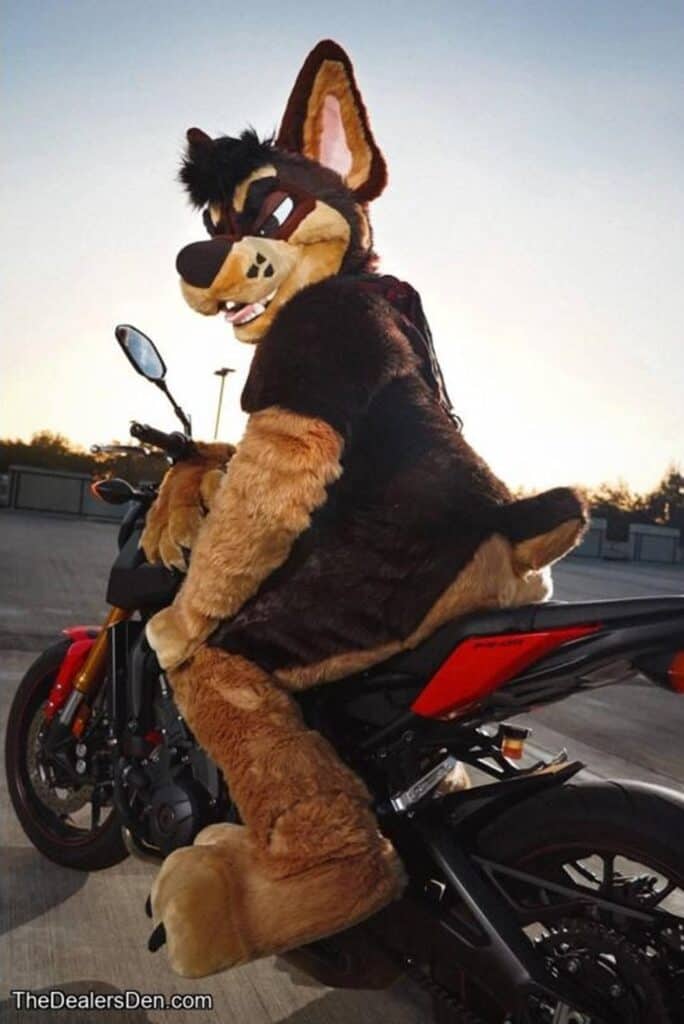 The Doberman Mutt is a fursuit built by Mixedcandy, a suit maker who will appear repeatedly on this list due to their reputation for high-quality, complete fursuits. They often break fandom records at auctions on The Dealers Den.

The Doberman Mutt suit is pictured riding a motorcycle due to its traits of rebelliousness and individualism. The suit consists of short fur, which is dark brown on the body and tan on the limbs and paws.

The tail is short and stubby, sewn right into the suit rather than pinned on like some other models.

The Doberman Mutt fursuit sold at its auction for $10,200.

Dobermanns are well-known for traits of intelligence, loyalty, and alertness. Among the furry fandom, they are considered the strong, stubborn guard dogs of the pack. 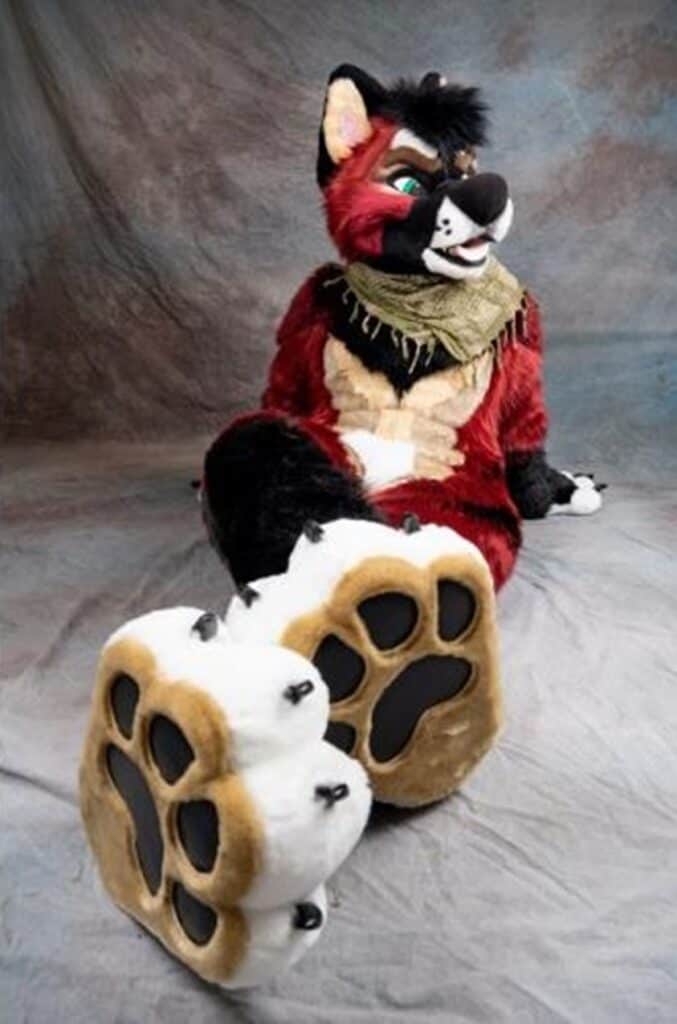 The Red Dog fursuit gets its name from its obvious bright red fur, distinguishable from the usual orange or brown tones of other fursonas.

Its hand and feet paws are black with white toes and tan/black pads. It has an expressive furrowed brow and tall, pink ears.

The suit was made by Mixedcandy and sold on The Dealers Den for $11,010, making it one of the priciest fursuits out there. 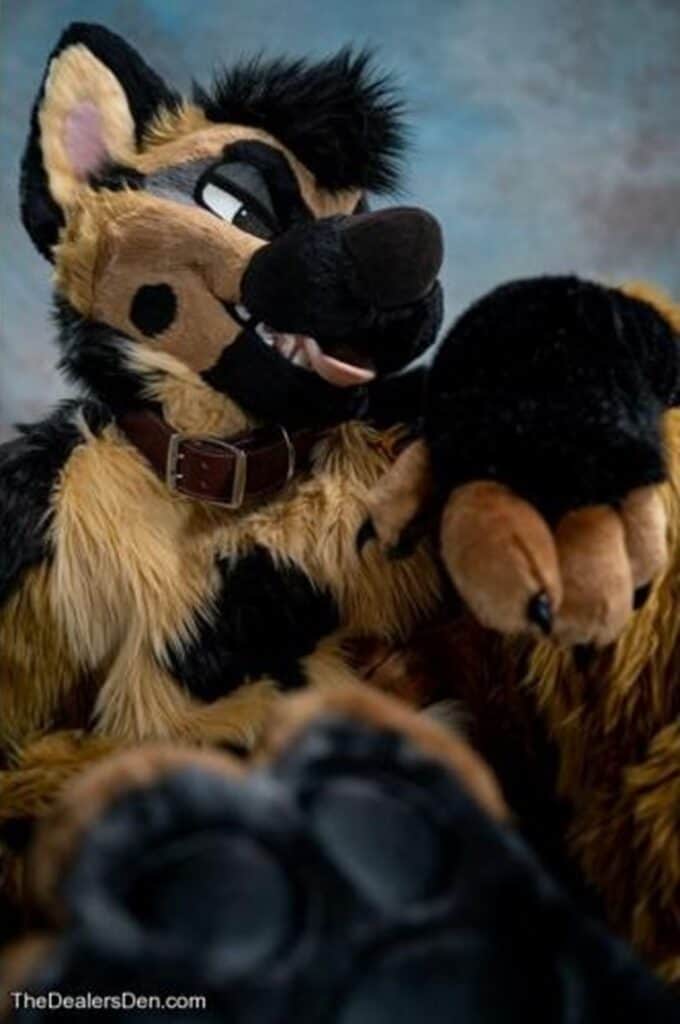 This German Shepherd suit was made by the luxury suit maker, Mixedcandy. Its fanged face is playful and antagonistic, with brown fur and black accents. Its paws are black with brown fingers, emulating gloved hands.

This breed of dog is marked by its intelligent fursona, as well as its strength and size. This is why this fursuit was made for someone taller and bulkier than the usual fursona. It was sold on The Dealers Den for $11,111.11, which is a surprisingly symmetrical amount for an auction that ended with dozens of bids.

German Shepherds are popular with the sub-community of furries known as Nazi Furs or “Nazifurs.” They started in March 2005 out of a shared interest in the Third Reich of Nazi Germany. The community’s founder was named Banalheart and expressed that the sub-category was designed to help them express their fetish for re-enactment, uniforms, history, and the military. 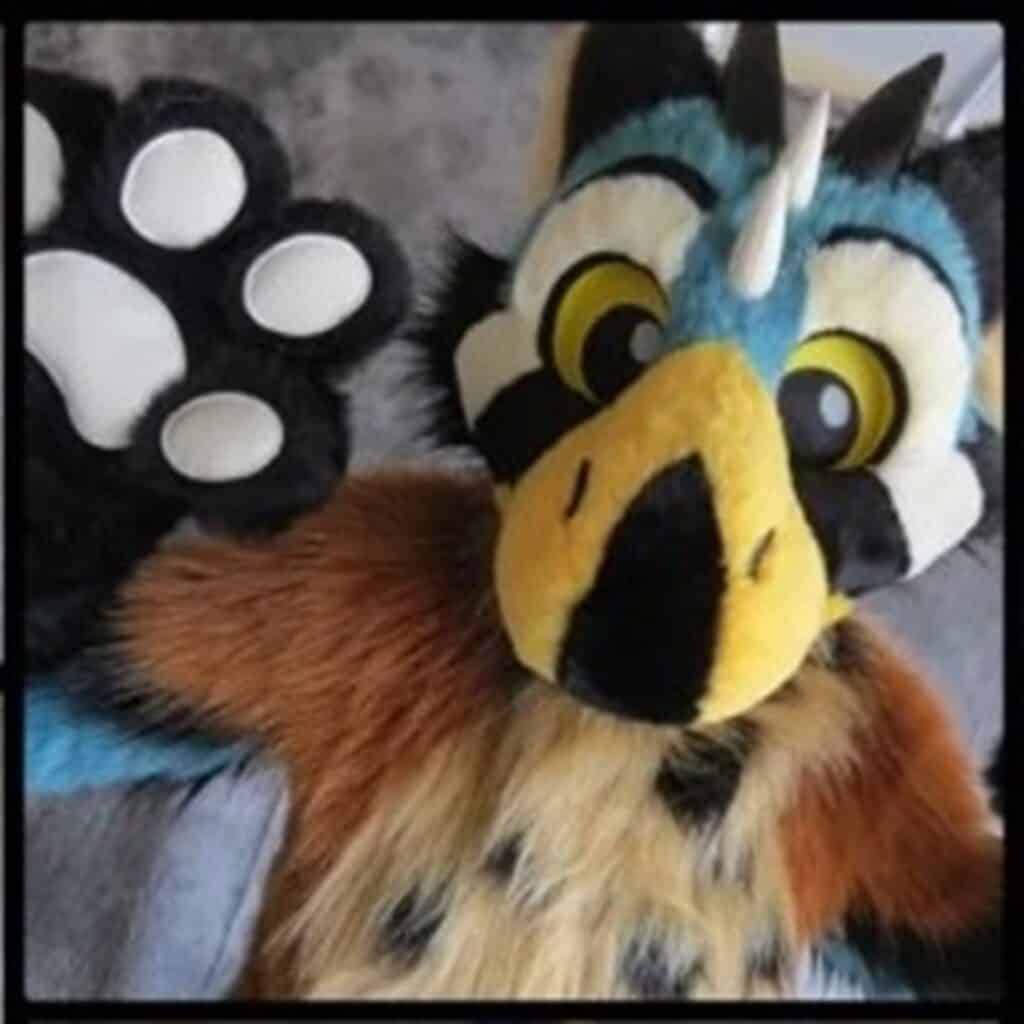 The Angel Dragon fursuit was made by PhoenixWolf and sold on The Dealers Den at the end of a grueling auction that accrued 187 bids on 2/14/2015. The final sale price of this multi-colored furry was $11,575. It’s noted for its furry multi-colored coat that’s gold and brown with blue and white highlights and black paws.

The fursuit broke a record for high-priced suit auctions that had been held for the previous four months by the Lavender Corgi, which cost $8,025. 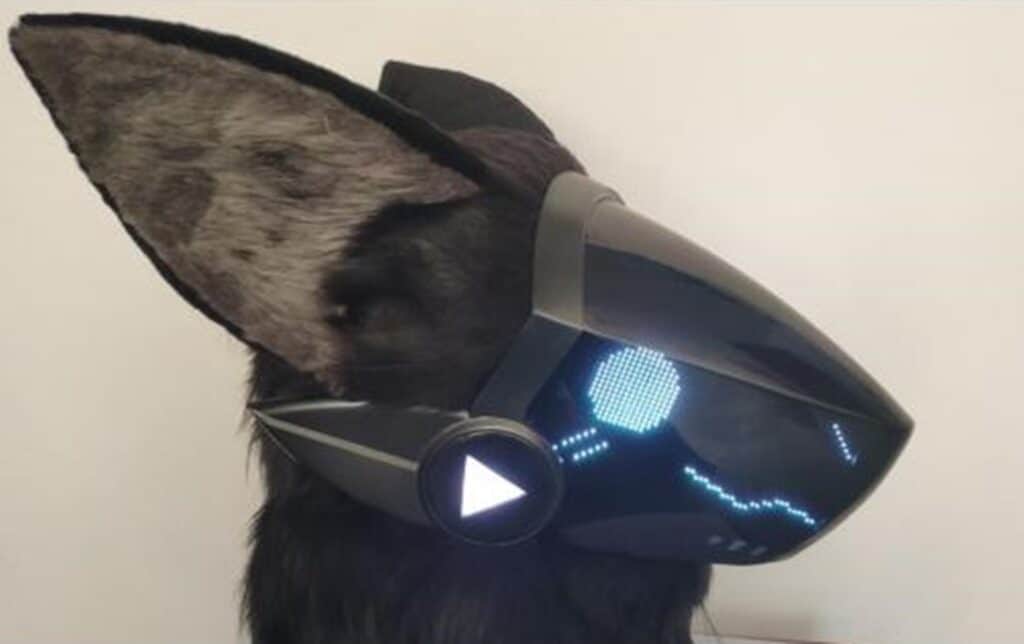 The Protogen fursona head was made and sold by Jting-F. It features a robotic animal head made from black plastic with metal and glass internal parts. The head’s long ears contain grey and brown fur while the mask itself is lined with black fur.

The thing that makes this head unique is its full electronic functionality, which allows the wearer to display blue pixelated emotions on the visor-like head. The head alone was eventually sold on The Dealers Den for $15,200.

Protogens, which are sub-species of Primagens, are Anthro cyborg creatures. According to the Furry Fandom, they are 40% artificial and 60% biological, with a robot face and organic ears and organs. The Protogen visor is created in furry lore using nanites. Protogens are inseminated in lab conditions and grown using a tank system that works as an artificial womb. 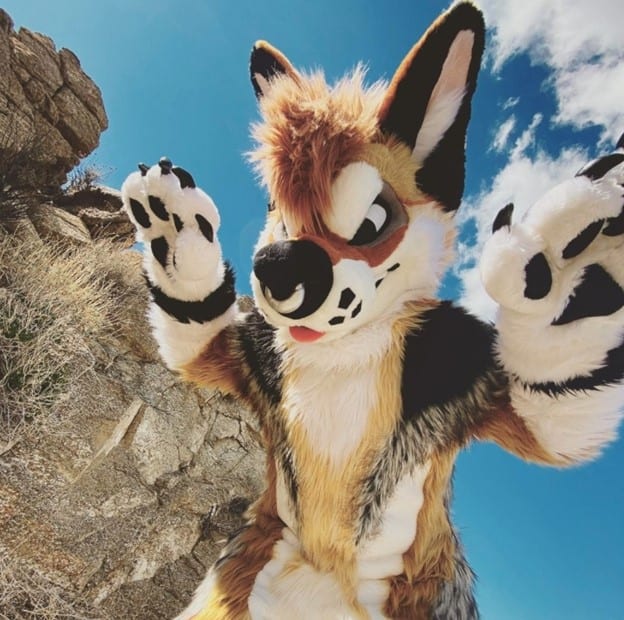 The Antonio Jackal fursuit was sold on December 17, 2021 after being completed in 2020. It was made by Mixedcandy Costumes and features the jackal, Antonio, whose primary traits are aggression and anger, signified by slanted angry eyes and a nose ring.

The suit has red, brown, black, and white fur with grey accents. The paws are white with black pads and nails. It was sold after a long bidding war on The Dealers Den for $15,600.

Jackals are often portrayed as cowards and conspirators. Their habit of scavenging gives them the reputation of being opportunists, which the Antonio fursona exemplifies in his visual personality. 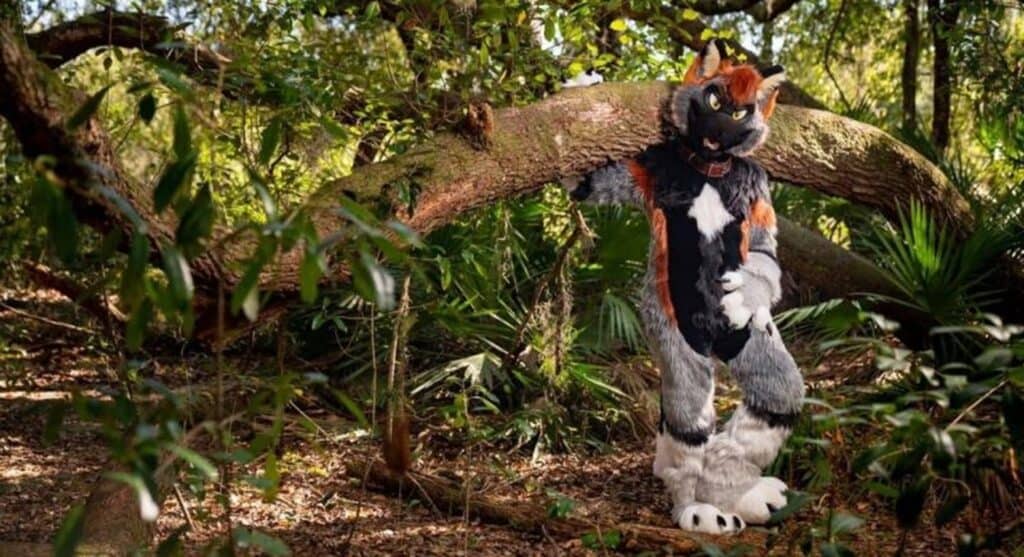 The Cross Fox fursuit is a costume made for sale on The Dealers Den in a collaboration between Mixedcandy, who made the suit, and Furitup, who made the feet and hand paws. The costume is suited (literally) for people who are up to 6’2” in height and up to 220 pounds in height. The feet fit people up to size 11.

The head is made from foam and the fur suit is mostly black with highlights of grey, white, and red orange. It was sold on the site for $15,700, plus $150 shipping.

Fur It Up makes all kinds of custom fursuits on their own, including popular ones for Digitigrades for $7,000, Plantigrades for $6,000, and partial suits for $4,500. Partial suits consist of heads, hands, and feet, with no fur body. 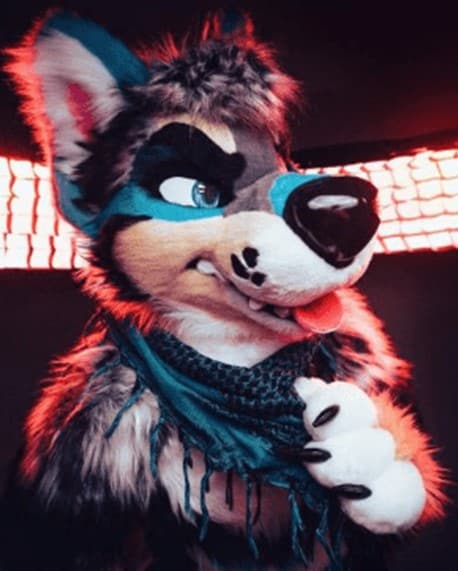 An auction on The Dealers Den that lasted for three days from Mixedcandy carried enthusiasm from the recently ended Anthrocon to the final sale price of this Manuel Dog fursuit. The goal was to balance traits of ferocity and cuddliness, which the maker calls “crush power.”

The suit was sold on the auction site for $17,017 on 1/29/2018, breaking the record for fursuits that was set 6 months prior when a commission for Made Fur You sold for $13,500. Since that was a custom commission rather than a specific suit, we didn’t include it as its own entry on this list.

Anthrocon is a major furry convention that began in 1997. 9,702 furries attended the most recent convention in 2022. Anthrocons generally bring over $5 million to the cities that host them. 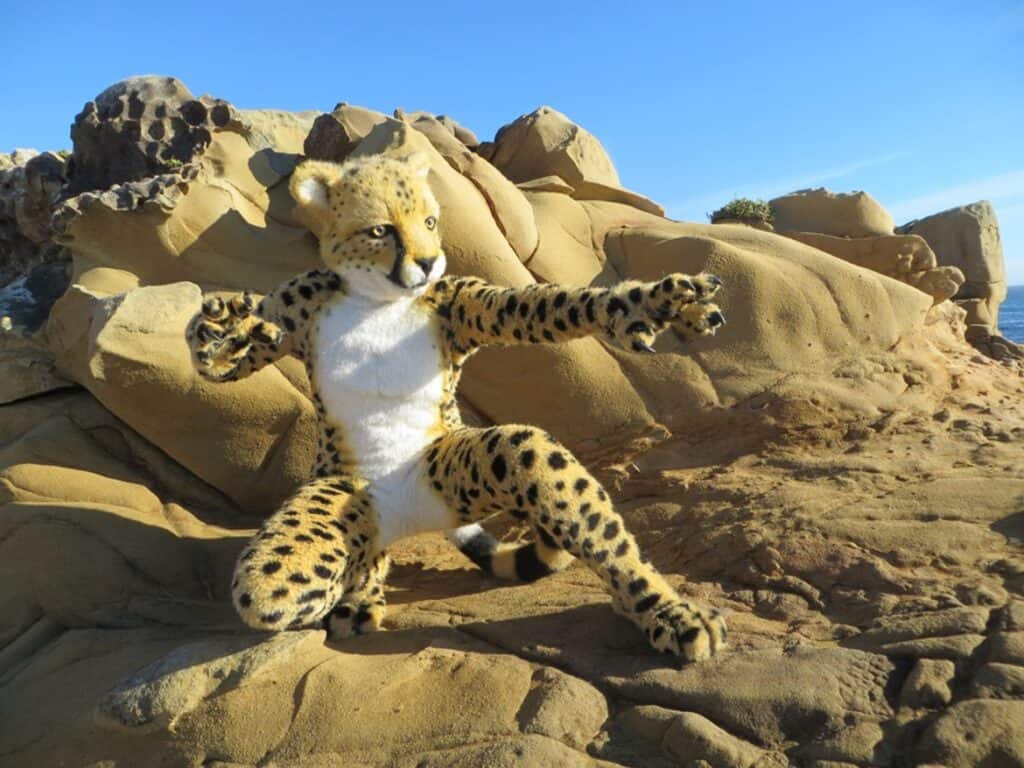 The Primal Visions Cheetah fursuit is made from NFT stretch fur with spots woven in. This is significant since most suits would have sewn on patches or simply painted them onto the fur. The comparative labor that goes into the Primal Visions suit caused it to go up in price when it sold.

It was made by Lex Rudd for Primal Visions for the fursona, Spotty. It sold for $17,500.

The artist Lex Rudd designs costumes, puppets, and creatures for Primal Visions. What started as a garage project extended to special effects for the O’Neill National Theatre Puppetry Conference. They’ve been working on minor TV and film productions ever since, as well as private commissions, including this fursuit. 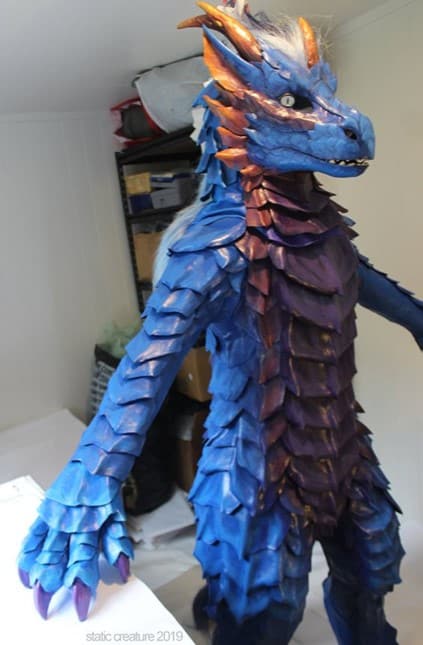 The most expensive fursuit is the Roar Dragon. This suit was completed in 2019 by Zaranthus Dragon. The suit favors a bright blue and purple palette with orange highlights.

The maker built the under-suit and then cut and attached all its leather scales.

This suit is unique in that it isn’t “fur” literally, other than the dragon’s fluffy mane. But it qualifies as the Zaranthus Dragon fursona’s costume, setting the top price for the industry when it sold for $23,500.

The listed price for this fursuit is only for the body suit alone. The head was sold separately once completed for an undisclosed amount.