Captain Marvel of basketball, Michael Jordan’s sneaker line “Air Jordan” is worth billions today, but it started as a five-year brand deal with Nike during his time with the Chicago Bulls.

Nobody could imagine the success of the OG Jordans, as this deal pulled in over $126 million in the first year alone.

Initially released in 1990, the collection expanded to 35 editions in total, with Jordan’s 5S or Air Jordan V collection being one of the most robust editions from the Jumpman’s closet. The designer of the original release was Tinker Hatfield, who took inspiration from Jordan’s game and the design of the American WWII fighter planes, creating what would soon be the “Holy Grail” of the sneaker game.

Air Jordan V carried some of the features from the IV edition but with a brand-new look. Some of the new features included lace locks, bulbous ankle collars, and a reflective tongue with a unique design.

From celebrities wearing Jordans to commemorating pairs, here’s a list of the most expensive and rarest Air Jordan 5s from the collection! 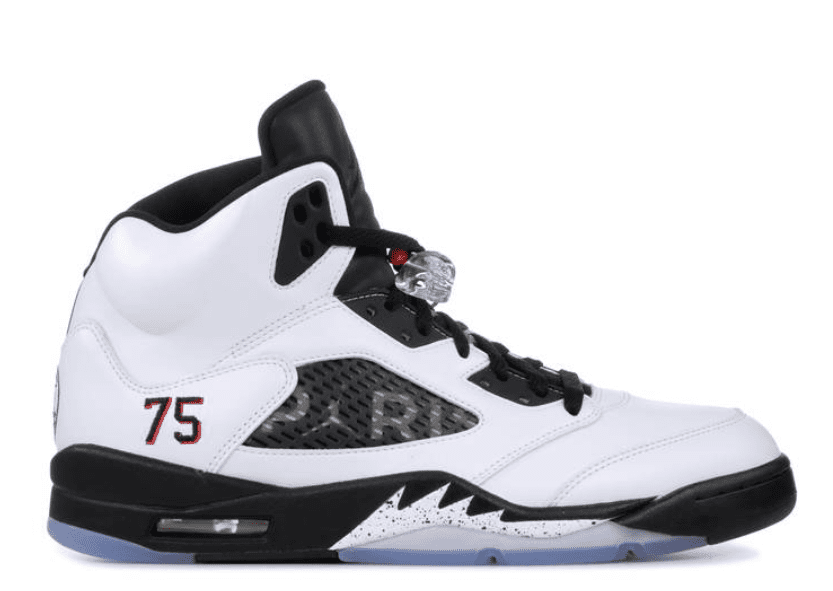 Michael Jordan’s Brand collaborated with a professional football club Paris Saint-Germain in 2018, creating a retro collection of soccer kits and on-field cleats, with the main course being the “Friends & Family” Jordan 5 sneakers.

This collection was designed by a legendary Nike designer Tinker Hatfield.

This special edition swaps colorway from black leather to white and keeps black details on the nets, shoelaces, and the “Jumpman” tongue on the front.

The sneakers include the Paris Saint-Germain (PSG) logo on the backstay of the heal and embroidered no.”75”, which refers to Paris’ zip code. 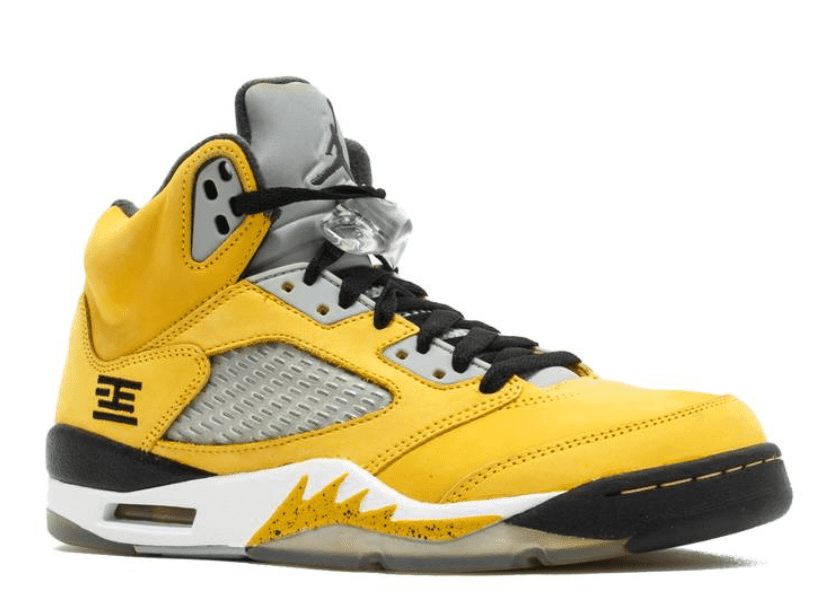 Jordan Brand opened its first Japan store in 2011 in a significant commercial center Shibuya City, Tokyo. To commemorate the new beginning, Air Jordan Retro “T23” was released the same year. The high prices for these sneakers are due to the limited edition.

The sneakers are accentuated with wolf-gray details over the yellow leather and hints of black. The sidewall of the sneakers has the OG no.”23” but as a Japanese character, embroidered near the heel. 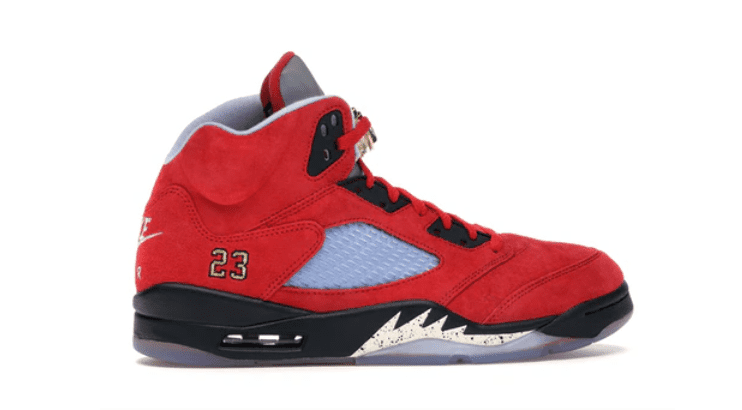 Jordan Brand redesigned the Air Jordan V Retro series in 2016 for the grand opening of the Trophy Room store in Orlando, Florida.

The retail price was $200, but some pairs sold for a couple of thousands over the last couple of years. The limited collection was inspired by the trophy room in the Jordan family home, being limited only to 223 pairs without a general release. 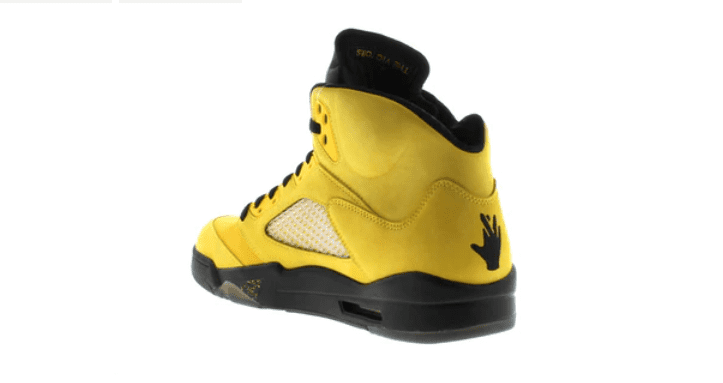 “Hail To” and “The Victors” is printed on each tongue with the Fab Five logo stamped on the heel.

The Fab Five were the immortal Michigan Wolverines of the University of Michigan men’s basketball team. Starting lineup consisted of Chris Webber, Juwan Howard, Jimmy King, Jalen Rose, and Ray Jackson. This team is considered one of the best-recruiting classes of all time. 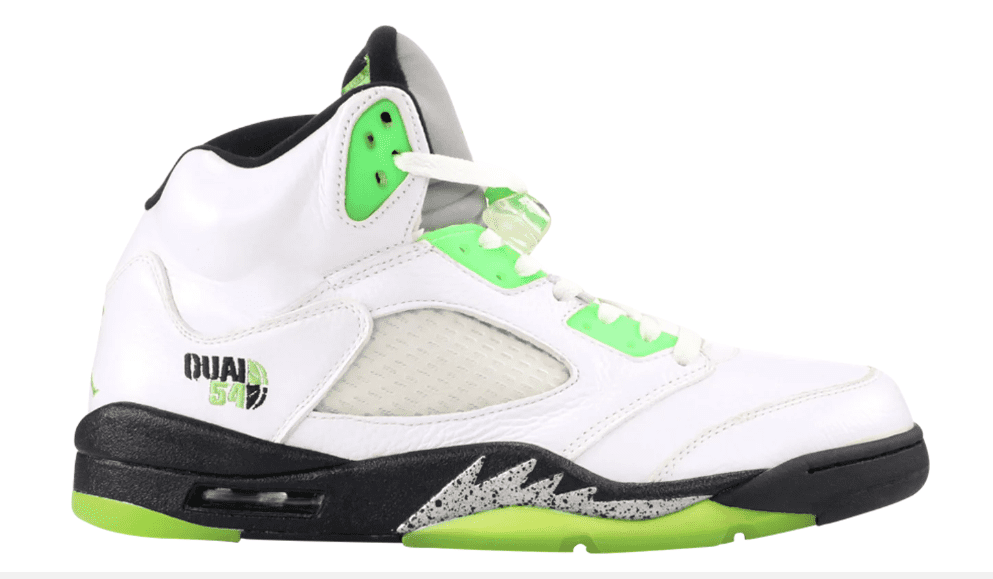 “Quai 54” is “the world’s biggest streetball tournament” and takes place on Place de la Concorde square in Paris every summer. It is the only streetball tournament in the world sponsored by the Jordan Brand, and the players wear attires with the “Jumpman” logo to respect that.

The tournament is known to include some of the rarest sneakers, Jordan 5 “Quai 5” being one of them. This “Friends & Family” limited collection dropped in 2011, changing the colorways into suede black and radiant green details, with embroidered no.”54” to commemorate the tournament. 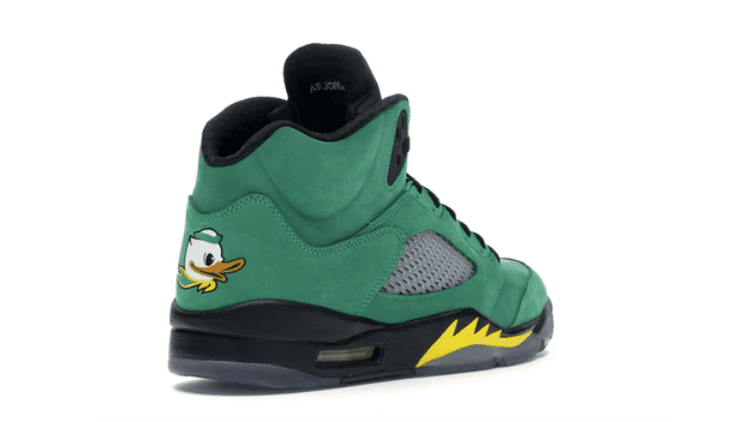 Air Jordan 5 – “Oregon Ducks” is another tribute on our list, this time to the University of Oregon and their Ducks athletic program. The sneakers’ colorway is dressed in the team-themed colors of apple green and yellow, with an imprinted face of their mascot “Puddles” on the heel.

Jordan Brand released another version of the apple green suede leather sneaker without the logo of this university in the earlier years. 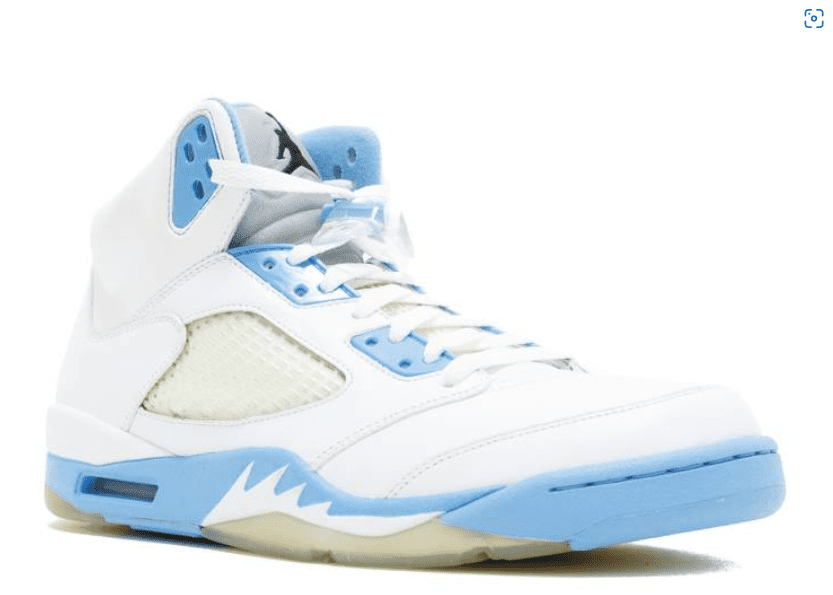 One of the rarest Jordan Retro sneakers on our list is “Countdown Pack Motorsports,” with only 23 pairs. The sneakers never received an official release to the public, as they were meant as a gift to Jordan Brand’s Motorsports team. The sample sneakers were a part of the “Family & Friends” edition.

Motorsports colorway is primarily white, with university blue details. “Jumpman” emblems are imprinted on the heel and the tongues of the sneakers.

The sneaker is simple looking compared to the others on our list, but it still holds a great value, selling for over $12,000. 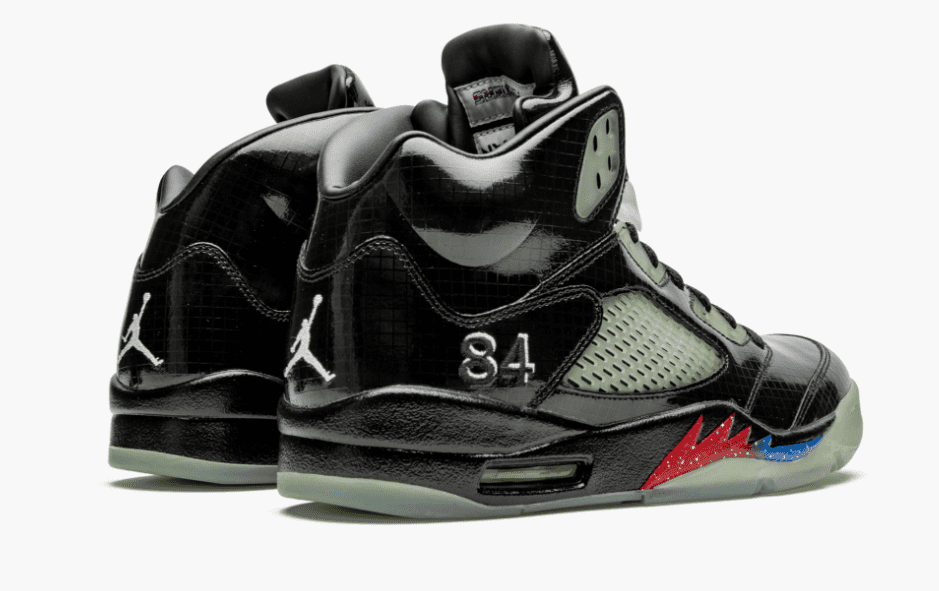 The most expensive and rarest Air Jordan V on our list is the “Transformers” Optimus Prime-inspired sneaker. This sneaker is one of the more recent works on our list as the original Air Jordan Retro was redesigned for the actor Mark Wahlberg and his movie “Transformers: The Last Knight.”

The OG Retro collection came out in 1990 with black and metallic silver details and iconic “23” stitching on the side. But this collection replaced no.23 with “84” stitching to commemorate the debut year of the original Transformers TV Series.

Air Jordans are undeniably one of Nike’s most popular sneakers on the market. In general, these shoes have a long and unique history.

For example, Michael Jordan never wanted to sign a contract with Nike. He described himself as an Adidas nut, but Adidas never came close to offering an agreement to Jordan.

Michael was also not fond of the red and black Jordans, as he explained those are, according to him, devil’s colors. Thus, everyone was skeptical about whether these sneakers would sell because he was still at the beginning of his career.

But these shoes became among the most revered, showing that taking the risk paid off for Michael.

What Made Jordan 5s Unique?

The fifth series was the first to include the 3M reflective material on the tongue to match Jordan’s rockstar-like fame on the court, adding to the legendary collection that it is today.

Air Jordan 5 were four colorways in the initial run, and a World War 2 Mustang fighter jet inspired their creation. Even though the first release came in 1990, these shoes got their retro edition only ten years after.

These were the first in a line of Air Jordan Retro in the 2000s. However, over 40 retro 5s were released in the following years, showcasing their never-ending influence.

Thus, Air Jordan III and IV were challenging acts to follow, imposing an arduous task on Tinker Hatfield. Yet, Air Jordan V was proof of steady evolution and dominance.

Many wondered over the years what makes these shoes so unique. The most common explanation is that they’re distinctive, and one can get them in various colors.

Hence, people can wear Jordan 5s, look eccentric, and stand out. Or, on the other hand, they can choose a classic model to demonstrate their love for comfort and admiration for Michael Jordan.

They are still among the most sought-after sneakers, as the most expensive pair of Jordan’s 1 Chicago Dunk Sole sneakers sold for $1,012,500 in 2022. They have expanded their significance beyond being just basketball shoes, becoming more of a status symbol or a fashion statement.

If you’re a sneaker collector, you must have the “Holy Grail” of sneakers in your collection, even though this list proves not every pair is affordable. But what is a couple of hundred dollars more if you get the chance to walk in Michael Jordan’s shoes?