Monkeys are a fascinating species that share a unique connection with humans. They are our distant cousins, as we share an ancestor from whom we all evolved in the past 60 million years.

Like us, monkeys are a mammal group that includes most primates, such as chimpanzees and apes. However, monkeys are different from apes due to being smaller and having a tail.

They are a diverse group scattered worldwide, resulting in different colors, sizes, and lifestyles. But all monkeys have something in common – they are intelligent and social-oriented.

Moreover, science recognizes two categories: Old World and New World monkeys. The former are habitants of the African and Asian continent, typically have no tails, and have trichromatic color vision.

The latter live in South and North America and possess prehensile tails (evolved to hold objects). But regardless of the group and their close connection with humans, many are considered endangered due to habitat loss, illegal wildlife trade, and lab testing.

This list explores the rarest monkeys in the world, facing extinction and harsh living conditions. 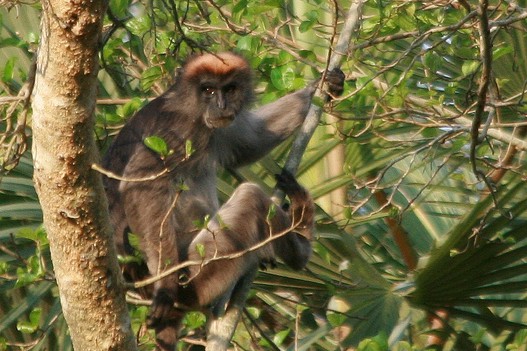 The Tana River red colobus is also known as the eastern red colobus, and this tiny critter lives near the Tana River in Kenya. This monkey is among The World’s 25 Most Endangered Primates due to habitat loss and human encroachment.

The Tana River Primate Reserve has existed since 1978 to protect this endangered species, but they still face danger as they occupy a small area only.

Thus, only 37 percent of these monkeys live inside the preserved space.

Introducing parasitic illnesses to these monkeys’ habitats is the latest threat to their preservation. After all, they are more prone to parasites than other primates. 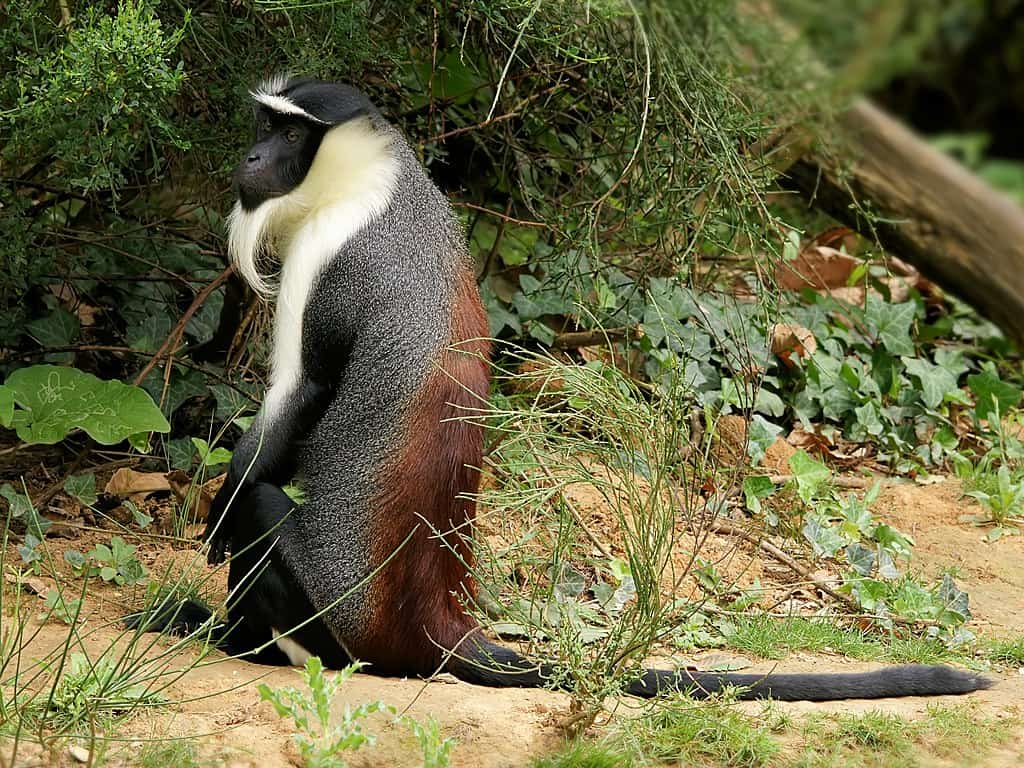 Roloway Monkey belongs to the Old World monkey group and lives in tropical West Africa. These white-bearded creatures are critically endangered due to being targets of the bushmeat trade (wildlife species meat) and habitat loss.

They are arboreal monkeys, meaning they reside on trees and use the branches to move. Sadly, researchers lack the estimated population data, but Roloway Monkeys are a vanishing species.

The Roloway Monkey is the largest of the 26 African Cercopithecus. They have dark fur with a dark-reddish area on their backs, spreading until their tails. 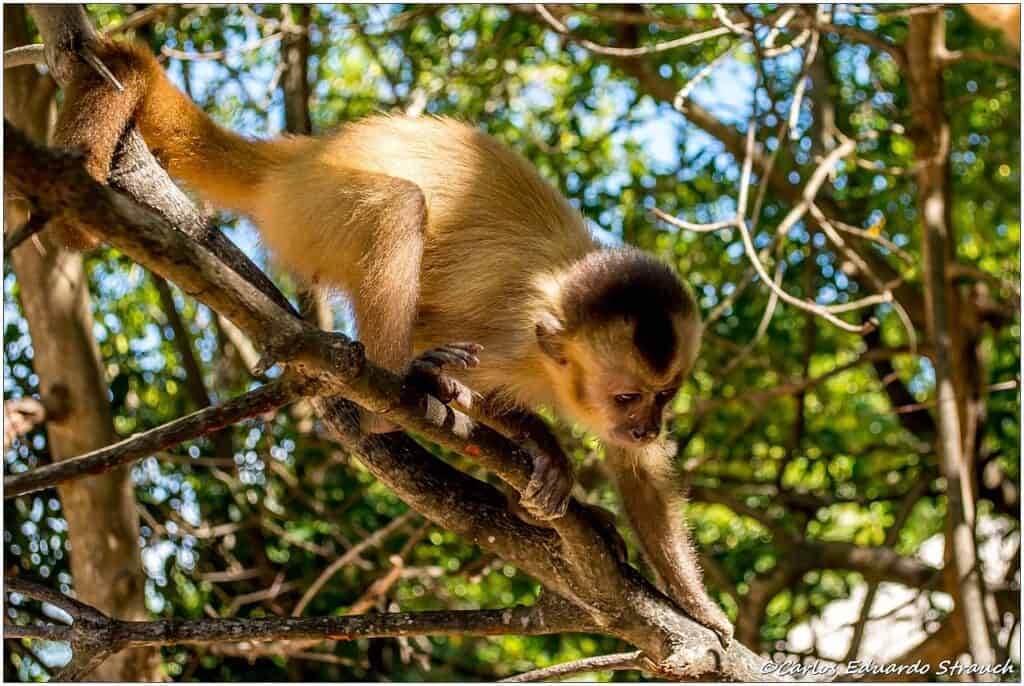 Kaapori Capuchin is a frugivorous species, meaning their diet consists of raw fruit, shoots, roots, and nuts. They live in the Brazilian Amazon and occupy a tiny yet densely populated area.

As a result, these monkeys are surrounded by humans who disturb their habitat, making Kaapori Capuchin the most endangered among the neotropical primates (New World monkeys).

These adorable critters have limbs more extended than the rest of their bodies and teeth structure, making it nearly impossible for them to cut into hard nuts.

The Kaapori Capuchin population has decreased by 80 percent since 2017. Besides being a naturally rare species, these monkeys are sensitive to even the slightest habitat disturbances. 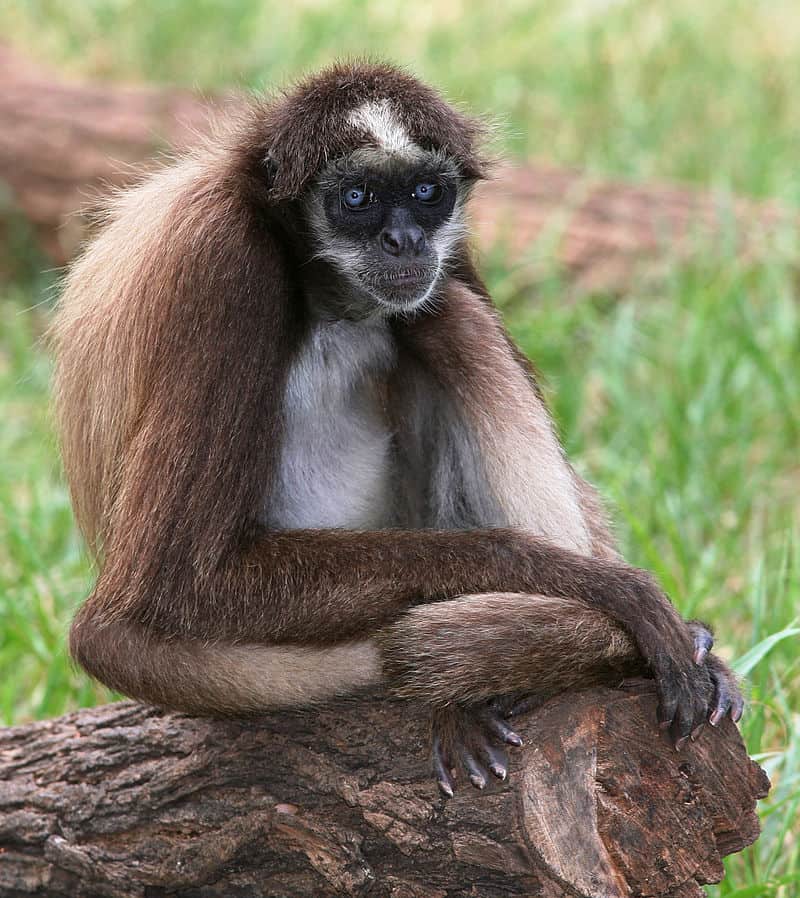 They have slender, prolonged limbs and tails adapted to catch objects from the trees. These monkeys are among the most threatened Neotropics species, and approximately 98 percent of their habitat is gone due to land clearance and logging.

Brown Spider monkeys live approximately 27 years. However, they can reach 40 years if in captivity. 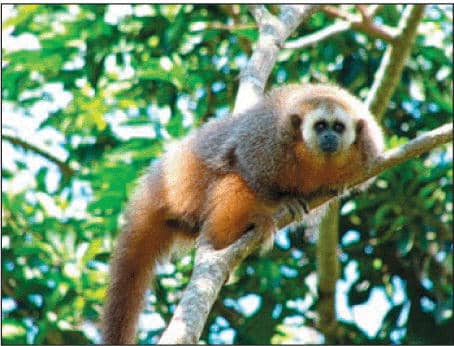 Rio Mayo Titi belongs to the New World monkey group and lives in a small area in Peru, contributing to their highly endangered status. The deforestation increase and high population density have limited the habitat of the titi monkeys.

The only way to protect Rio Mayo titi from extinction is to protect the forests and reduce the number of parasites that might disturb their life span. These tiny creatures eat leaves, fruits, seeds, and insects and have a high success rate of catching vermin (over 83 percent).

Rio Mayo titi is typically monogamous and stays with their mating partner until death. Moreover, both partners take equal care of their young. 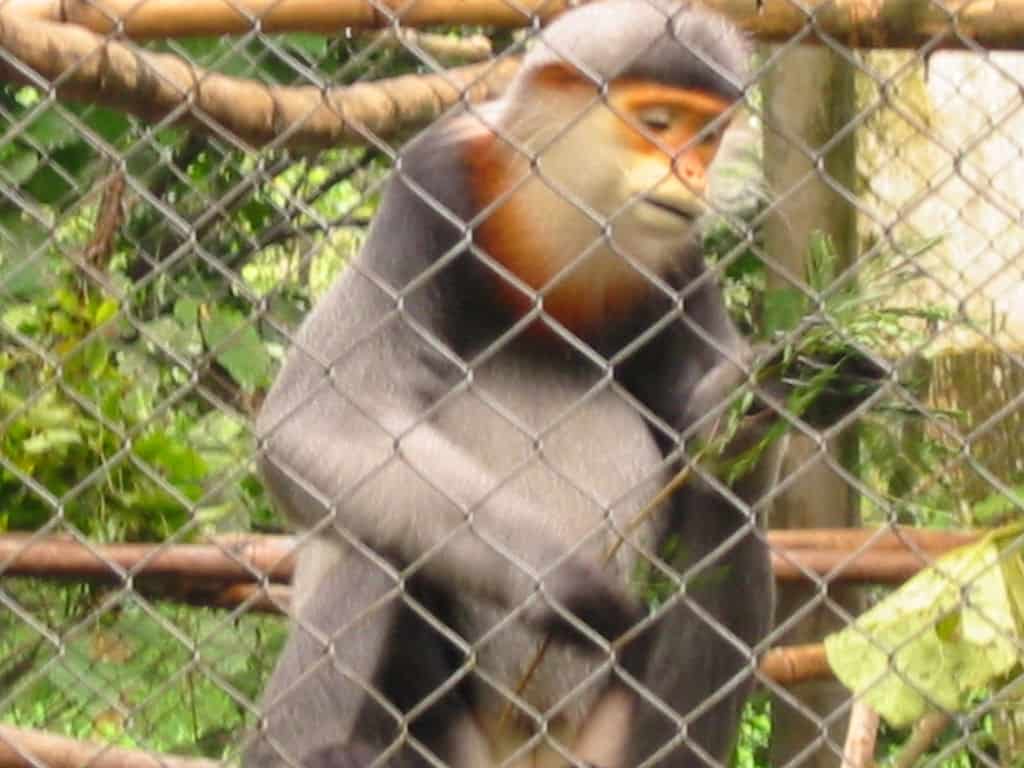 The grey-shanked douc langur belongs to the Old World monkey group and is endemic to five Vietnamese provinces. These monkeys have light grey fur and a pale underside, adding to their unique appearance.

As diurnal creatures, the grey-shanked douc langur typically sleeps during nights and jumps and swings from the trees using their arms during the day. Moreover, these monkeys practice dominance hierarchies, and males are the dominant gender.

Grey-shanked doucs use visual communication, sounds, and touch to communicate. For instance, they growl to express aggression or warn other monkeys of danger. 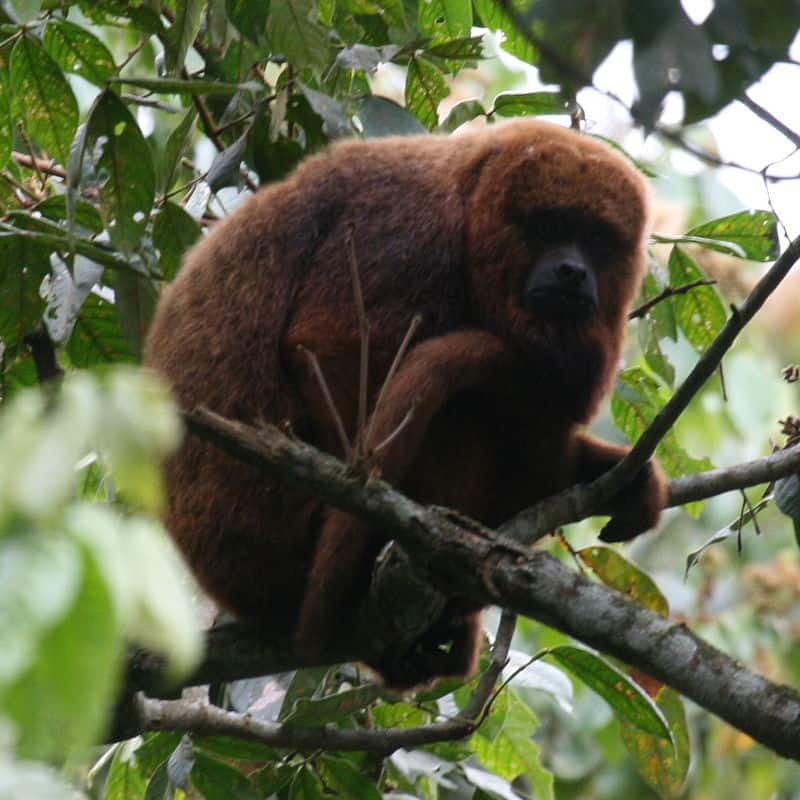 The northern brown howler belongs to the New World monkey group and lives near the Jequitinhonha River in the Brazilian Minas Gerais province. These monkeys follow a diet that consists of flowers, fruits, and immature leaves, as these are easier for their stomachs to digest.

They are critically endangered due to the limited living range and humans encroaching their territory. Thus, these dark-furred creatures are victims of the bushmeat trade and often lose their homes to fires.

Very loud roars are the most significant characteristics of these monkeys. They live in smaller social groups in the canopy, and females are tinier than their male counterparts. 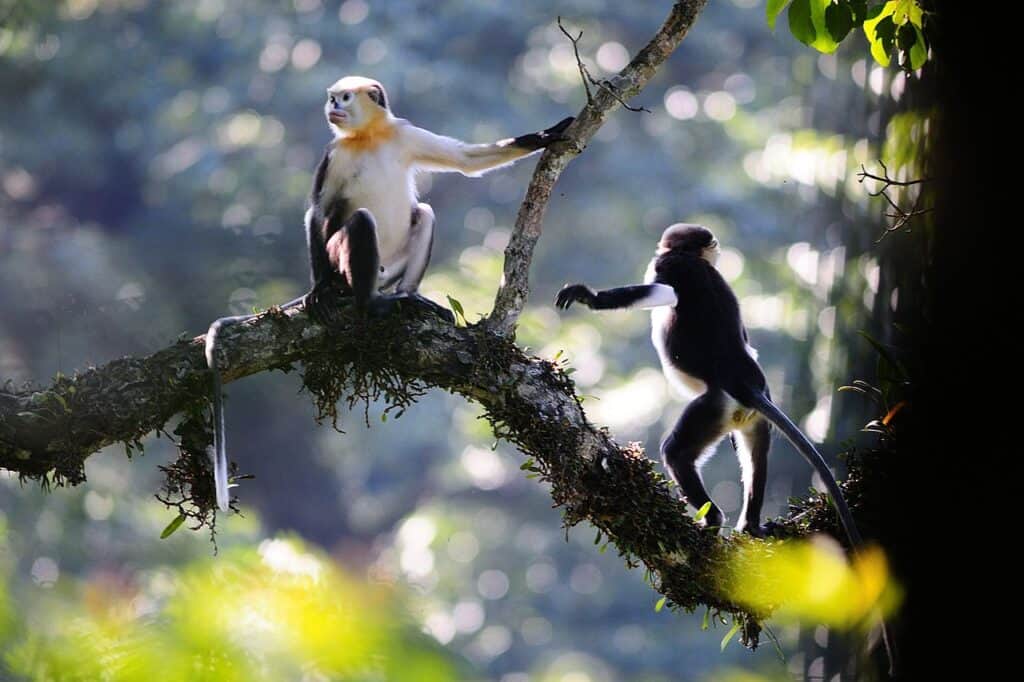 The Tonkin snub-nosed monkey, also known as the Dollman’s snub-nosed monkey, belongs to the Old World monkey group, has a slender body, and is an arboreal type. These monkeys are native to Vietnam, have black and white fur, and a unique pink, upturned nose.

One can only find them on elevations from 700 to 3,900 ft (200 to 1,200 m), as these creatures rarely climb down from the trees. Fewer than 250 individuals exist today due to increasing habitat loss and hunting.

These monkeys were considered extinct until the 1990s when a small population was discovered in Vietnamese Tuyên Quang Province. However, they’re still critically endangered due to poaching, illegal logging, environmental changes, and polluted air. 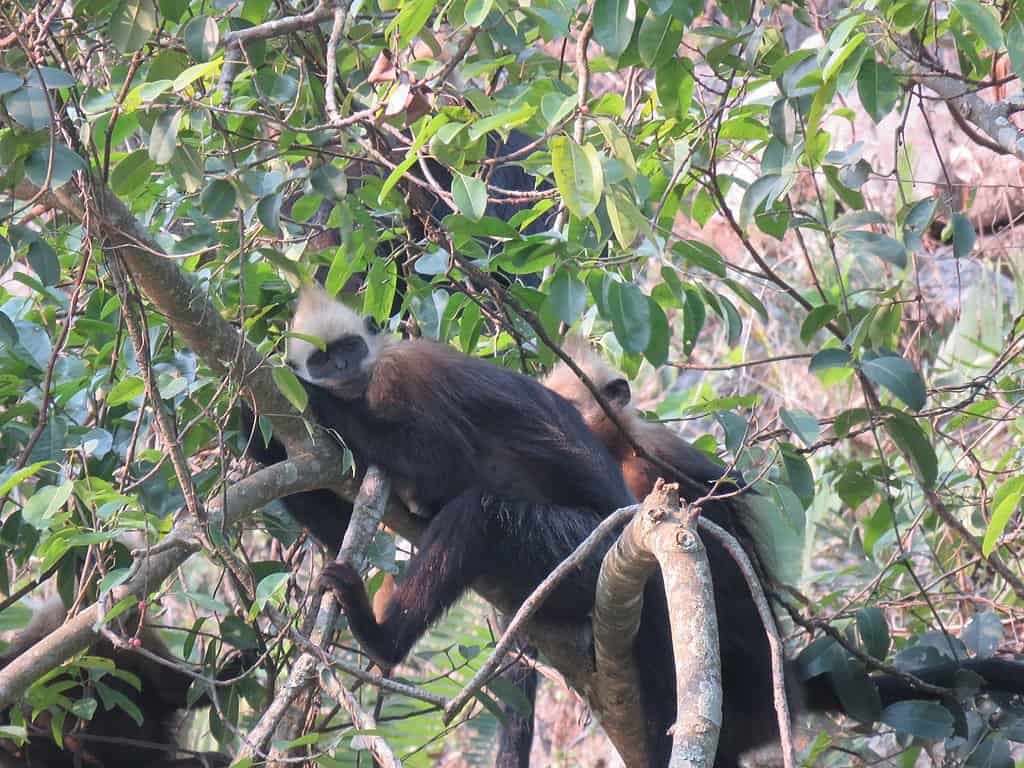 The Cát Bà langur, also known as the golden-headed langur, belongs to the Old World monkey species and lives on the Cát Bà Island in Vietnam. These monkeys have black skin, dark brown fur, bright gold shoulders, and head.

Their population has decreased by 80 percent in the last three generations, and fewer than 70 individuals remain in the world. The Island has increased its conservation efforts since 2001, but they aim to become a significant tourist destination, which could attract more hunters and endanger these monkeys.

Up to 800 Cát Bà langurs were killed between 1970 and 1986, as langur hunters were ruthless and killed anyone who got in their way. The Cát Bà Islands tried to protect the monkeys by introducing guards, but after some time, everyone refused to take this job out of fear from the poachers.

Hainan Gibbon is endemic to northern Vietnam and Southeast China and is the rarest monkey in the world due to poaching, human encroaching, and habitat deforestation. These orange-furred creatures were considered extinct until 2002 when two biologists discovered a small population.

However, Hainan Gibbon is an enigmatic species that lives in a little forest patch, making them vulnerable and putting their future under question. Thus, the remaining individuals are typically related, forcing inbreeding.

Adult Hainan Gibbon males are black-furred and have a shaggy crest, while their female counterparts have golden yellow fur and a black crown. These monkeys are stellar singers, as they sing duets at dawn to boost bonding, mark their territories, and attract females.

Even though monkeys are human’s distant relatives and a majestic species, many face extinction due to factors humans can control. Increased deforestation for agriculture, tourist residences, and homes is reducing their habitats, and the wildlife trade is endangering their lives.

Numerous conservation groups direct their efforts toward protecting these primates, but many people still lack awareness of the innate value of these vulnerable beings. Better protection laws and regulations, as well as better education, is necessary.

Otherwise, the list of critically endangered monkeys could increase, and the world could lose irreplaceable species.