8 Rarest Types of Lizards in the World

More than 7,000 species of lizards can be found around the world. They vary in shapes, sizes, colors, and appearance. The length of an adult lizard ranges from a few inches to nearly 10 feet. However, most lizard species are fairly small, with four legs and side-by-side motions.

Lizards can be carnivorous, omnivorous, insectivorous, herbivorous, or nectarivorous. Some lizards produce venom, and they can often be extremely dangerous. Recently, it has been found that lizards can produce nine classes of toxins that are found in snakes.

Some lizards are quite common and can be found in different localities across the world, whereas some other lizard species are endangered and restricted to a single geographical location. Here we have gathered a list of the 8 rarest types of lizards found around the world. 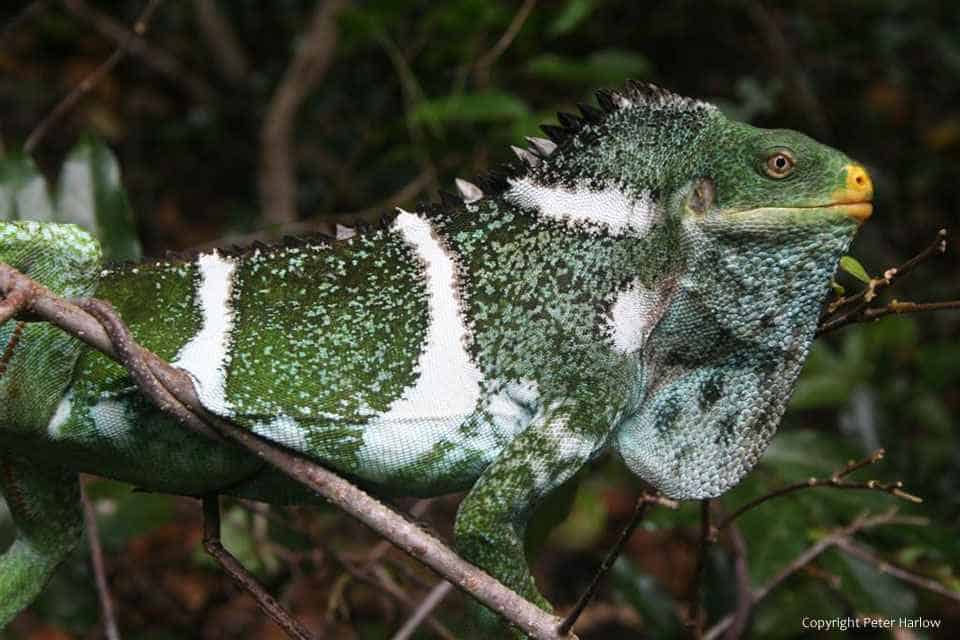 Fiji Crested Iguana is a critically endangered lizard species found in the islands of Fiji. Among the total 1300 (or fewer) individuals, 1200 are restricted to a 70-hectare island called Yadua Taba. The remaining population is scattered on 14 other islands.

Fiji Crested Iguana is a green-colored large stocky lizard. The male lizards have three narrow cream bands on their body that distinguish them from Fiji-banded iguanas.

These iguanas have a dark green appearance at birth, but after several hours it turns bright emerald green. When threatened by any potential predator, they rapidly change their color from green to black. 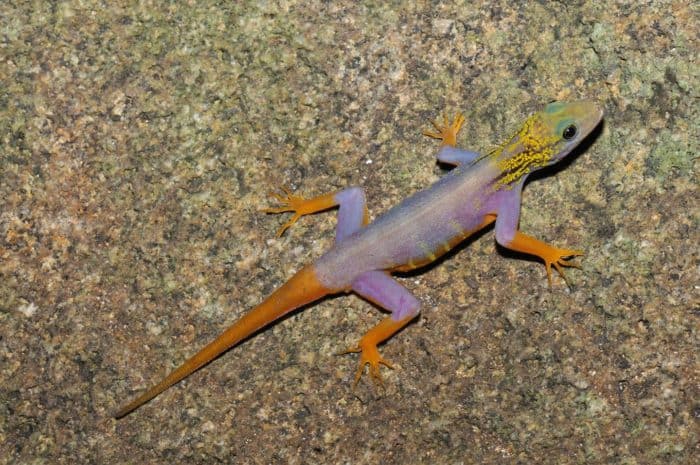 The estimated adult population of this endangered species is little more than 500 individuals. Habitat loss and predation are the greatest threat faced by Psychedelic Rock Gecko.

This species was first scientifically described in 2010. A mature Psychedelic Rock Gecko is about 3 inches long and brightly colored with yellow, orange, lavender, and golden.

A study 2021 found that every Psychedelic Rock Gecko got a unique life-color pattern and the pattern is stable for at least three years for each individual. 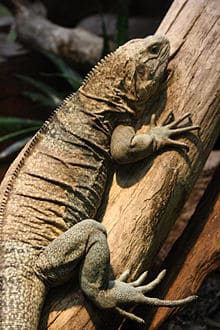 Jamaican iguana found its place in the Guinness Book of World Records as the rarest lizard in the world. This large species of lizard was considered extinct in 1948. It was then rediscovered in 1990.

Jamaican iguana lives in the dry forest of Hellshire Hills and is confined within less than a four-square-mile area. Once this iguana was common throughout Jamaica, but the population declined dramatically during the second half of the 19th century.

The length of a mature Jamaican iguana is around two feet. They are green to salty blue in color with dark olive-brown triangular stripes on the back. They are the largest animals native to Jamaica.

The single biggest threat to this species was the introduction of the small Asian mongoose as a snake-control measure. The mongoose relied on these iguanas as a primary source of food, and as a result, the Jamaican iguanas became almost extinct. 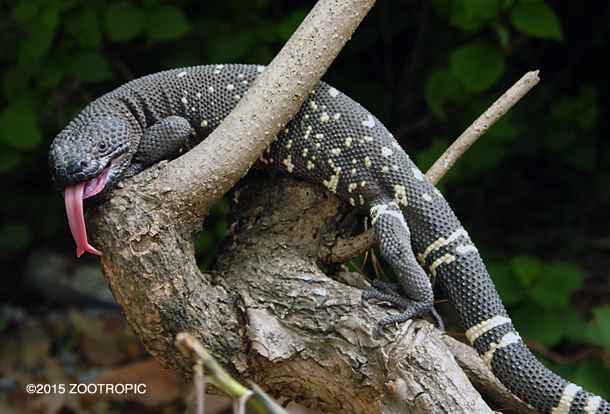 Guatemalan Beaded Lizard is the rarest beaded lizard species, with fewer than 200 individuals in the wild. This highly endangered lizard can be found in Motagua Valley thorn scrub in south-eastern Guatemala.

They belong to the Helodermatidae family of lizards, who are known for having venom glands. Guatemalan beaded lizards differ in size and shape from other lizards in this family and are the smallest of them all.

The Guatemalan Beaded Lizard was first found in 1984 by D. Vasquez, an agricultural laborer working in Motagua Valley. Since then, it hasn’t been found anywhere else in the world.

Some species of lizards can go without drinking water their entire life. It has long been believed that some lizards endemic to hot deserts do not drink water at all. However, some recent studies delegitimize this claim. 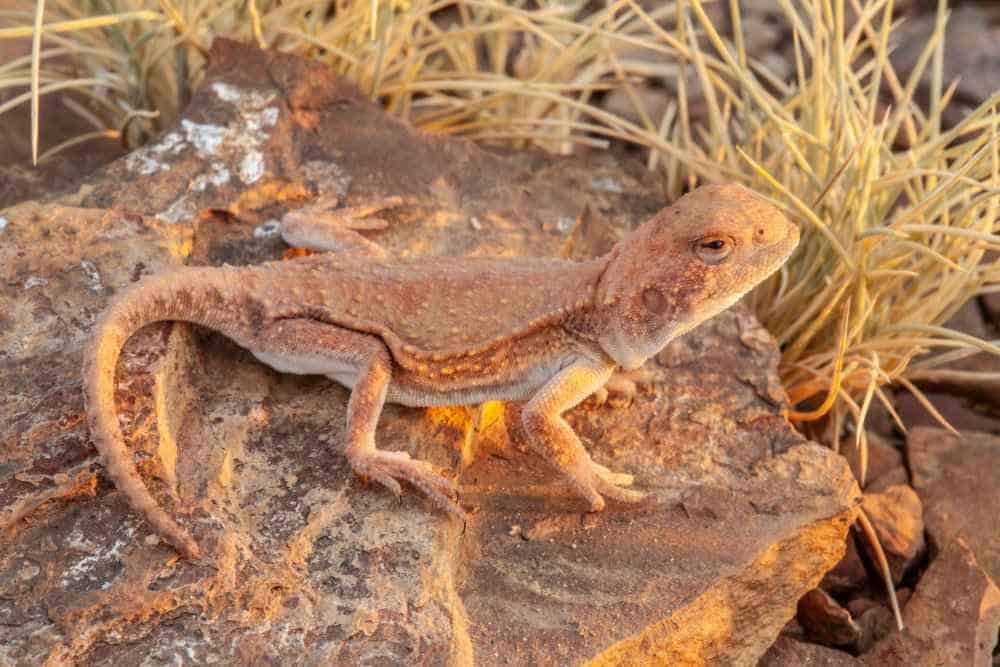 The hidden Dragon lizard, also known as Gravel Dragon, is endemic to the northeastern interior of Western Australia and the adjacent Northern Territory. Data on this rare lizard species is scarce as scientists struggle to spot them in the wild.

A small population of this elusive lizard was first found in 1979 in Western Australia. Six years later, another population was discovered near Northern Territory. Scientists surveyed the whole area to gather more information on this rare species but couldn’t find any for 27 years.

In 2011, a botanist conducting a floral survey in the area was able to photograph an adult individual first time in a while. It intrigued the scientists-community, and more intense surveys were carried out.

Finally, in 2016, the Australian Museum herpetology team successfully gathered information about the habitat, breeding biology, diet, and ecology of this rare species of lizard.

Hidden Dragon lives in gibber plain and can mimic the gibber stone so perfectly that it becomes almost impossible to spot them. 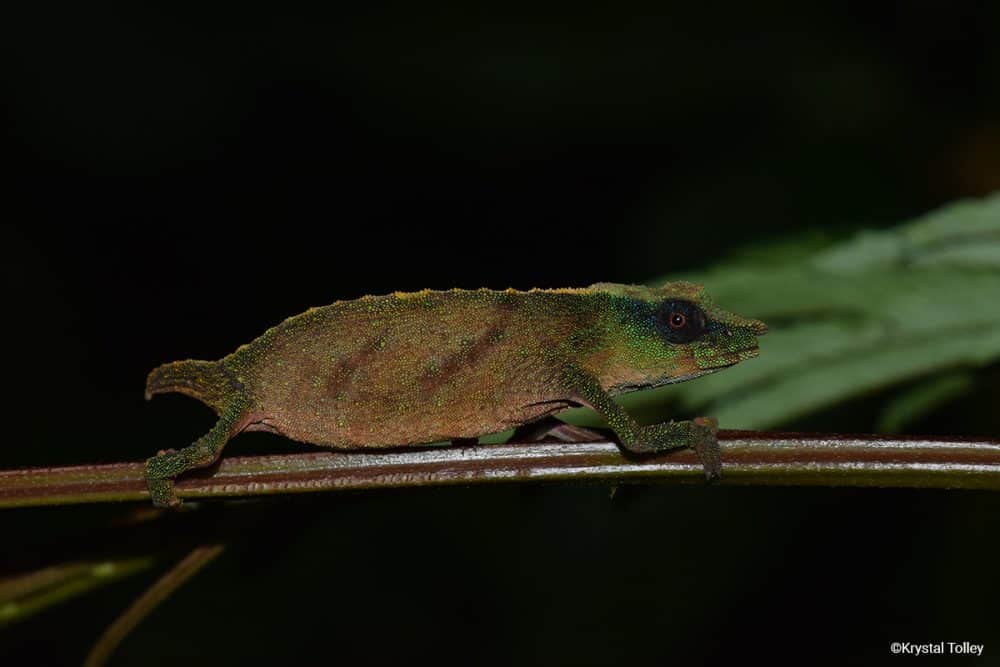 Chapman’s pygmy is the most endangered chameleon in the world. They are listed as critically endangered on the IUCN Red List. The current population of these tiny lizards are not known. They are restricted to the forest fragments in the Nantundu hills, Malwai, located in South-eastern Africa.

The species was first described by Colin R. Tilbury in 1992 and not seen again until 2006. The maximum length of adult lizards reaches only up to 2.2 inches. They are usually brownish but can change their color to blue and green with little dots all over the body.

Habitat loss is the greatest threat to the existence of this species, and scientists believe their population is on the decline.

Chameleons change their body color by altering the pigment granules in the cells. They disperse or concentrate the granules to change the color. The color change is caused by a complex interaction between temperature, hormones, and the autonomic nervous system. 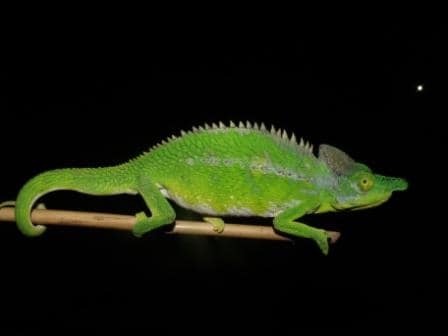 Belalanda Chameleon, or the Sangoritan’i Belalanda, is a green-colored lizard found in Belalanda, a town in southwest Madagascar. The population of this extremely rare species is restricted to an area of 1.5 square miles.

This lizard originally lived in the gallery forest, but after the forest had been cleared, they now live in the upper branches of the non-indigenous trees. Currently, charcoal production from the logs is the greatest threat to this species.

The exact population size is not known, but the International Union for Conservation of Nature estimates the population is declining rapidly. 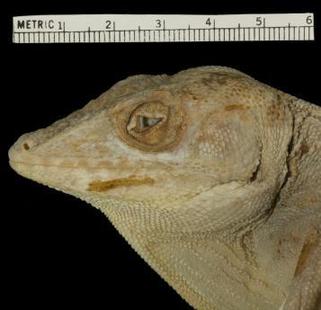 The species was first scientifically described in 1931. The lizard reportedly had brown-grey skin with two pale lines on each side of its body. The abdomen was white, and the tail had a yellow-brown hue.

Culebra Island Giant Anole has not been spotted since 1932. There have been unconfirmed sightings, though. Some scientists believe this rare lizard has gone extinct. However, a search is still on for this species, and it is not yet declared to be extinct.

The reason for the decline of this species is still unknown. However, rapid deforestation and habitat loss are probably the primary causes that led to its possible extinction.

8 Most Expensive Houses Currently on the Market in Oregon