Snakes trigger primal fear in many people and often become their most debilitating phobia. But although 600 species out of 3,000 are venomous, only seven percent can be fatal or cause severe damage to a human.

Despite their formidable nature, these reptiles are unique and have a remarkable power of adaptation. They can stretch out their rib cages and widen their bodies during winter, as they’re cold-blooded animals and require heat for temperature regulation.

Sadly, snakes face extinction due to climate change endangering their habitat. That would exterminate some already rare species and disrupt the food chain. 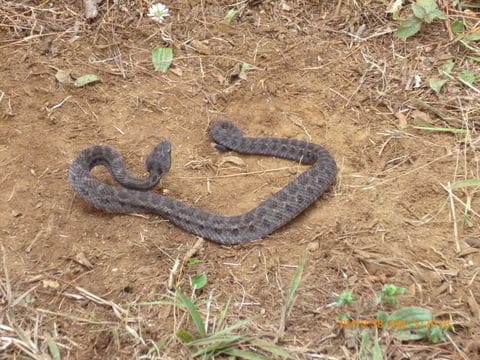 Also known as the Crotalus Pussilus, this snake lives in pine-oak forests, and it’s not likely to find it at altitudes below 1500 meters. Its length can reach up to 68 cm in males, but their female counterparts are smaller.

Tancitaran dusky rattlesnake has two heat-sensing organs between its nostrils and eyes and is rarely active at night due to the lower temperature.

Although volcanic activity, fragmented forests, and cartels are causing its habitat decline, no one knows the exact size of the Tancitaran dusky rattlesnake population nor plans research. As a result, this species will likely go extinct without anyone noticing. 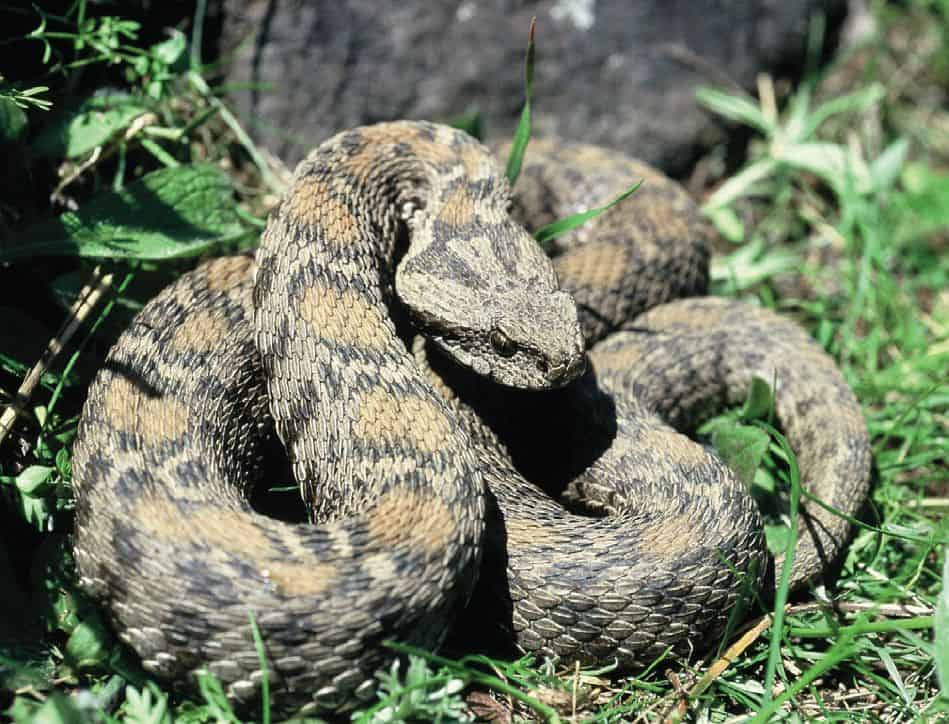 Wagner’s viper is a poisonous snake that belongs to the Viperidae family and lives in northwestern Iran and eastern Turkey. German naturalist Moritz Wagner discovered it in 1846, but the species was presumed extinct until 1986.

The Saint Louis Zoo in the U.S. runs a Species Survival Plan and protects Wagner’s viper from going extinct via the cooperative breeding program. However, these snakes still face danger in the wild as their habitat becomes smaller every year. The principal unique feature of this venomous snake is that it has no rattle. According to the scientists, the Island Rattlesnake had to adapt to the environment and become more efficient in hunting birds, causing tail degeneration.

This slender snake has been on the critically endangered list since 2007 due to its habitat encompassing less than 100 km2 and the introduction of feral cats.

Santa Catalina Rattlesnake is a fast and capable climber. However, it prefers to be on the ground, and it’s easy to observe it as this serpent rarely hides. 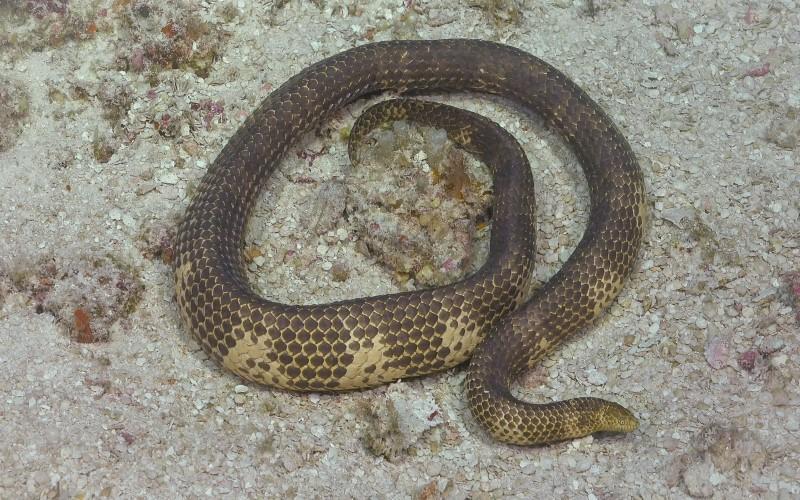 Also known as the Sahul reef snake, this brown, 60-cm-long serpent lives off the coast of northern Western Australia. Although the Short-nosed Sea snake typically rests underwater, one can also find it on the reef flats.

These snakes are on a fast decline, and even though there’s not a single cause for their impending extinction, the rising ocean temperatures might be their principal threat.

The scientists believed these snakes were extinct at Ashmore Reef for 23 years until researchers found them during a deep-sea expedition in 2021. The discovery was made in the twilight zone, 67 meters below the surface, representing another chance to protect this species. 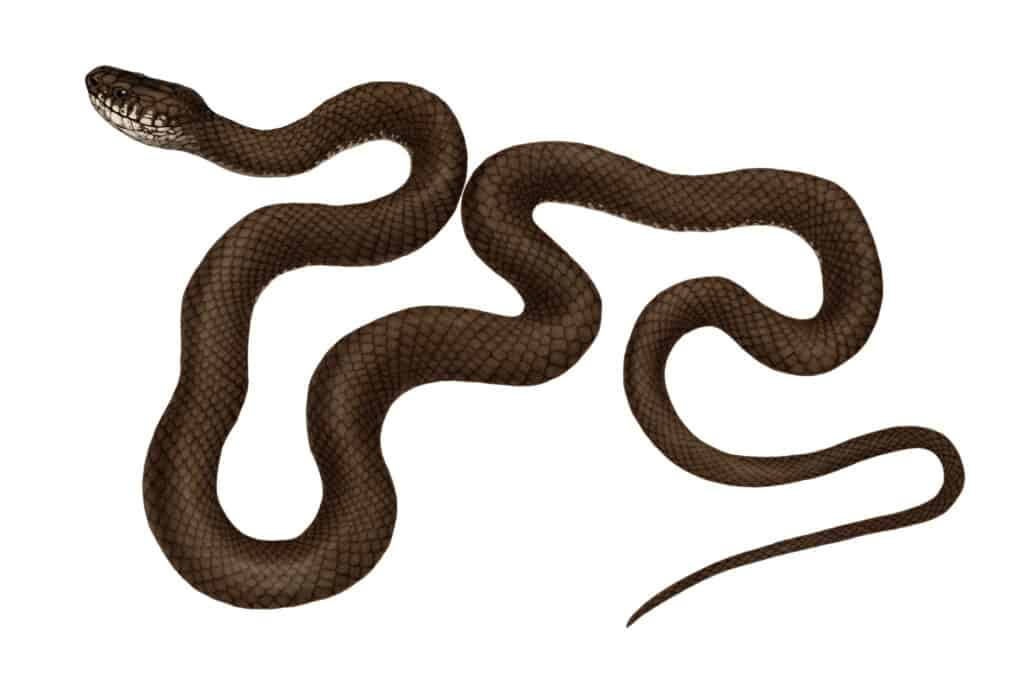 Ross’ Wolf Snake belongs to the colubrid species and lives on Dalupiri island in the Philippines, although little is known about its ecology and habitat. Biologists discovered it in 1990 and chose the name as a tribute to the former leader of the Mocatta Metals Corporation and their work’s supporter, H.G. Jarecki.

This dark-brown snake without patterning on the back has an almost cylindrical body and a distinctive, flattened head with nearly circular pupils.

The forest where the Ross’ Wolf Snake lives is fragmented, and ranching activities cause its continuous degradation. As a result, their small habitat is declining, yet no direct conservation measures exist to protect this critically endangered species.

Rarity: Rare
Conservation Status: NE; it was listed as critically endangered until 2021
Venomous: Yes: fatal venom, but they only bite if provoked
Geographic Area: Aruba Island, the Caribbeans 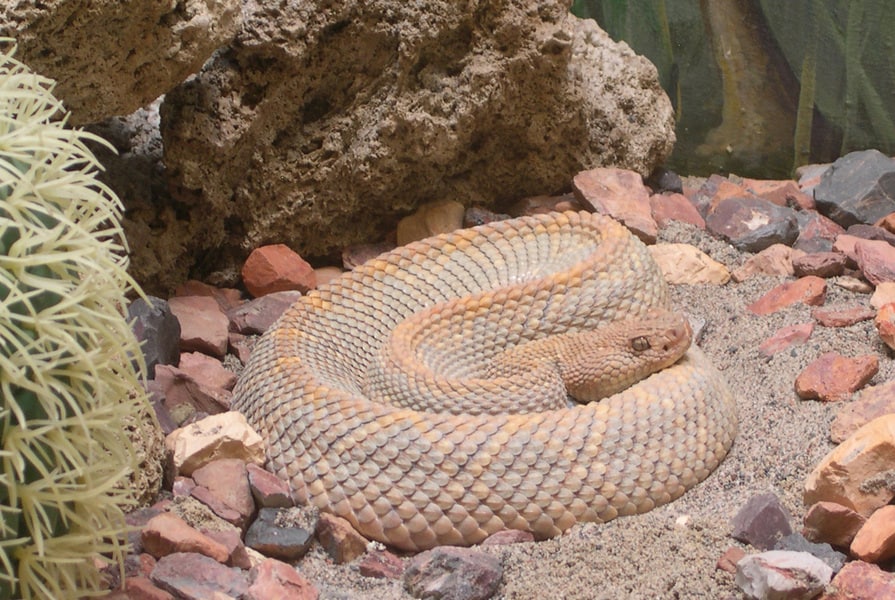 Its self-explanatory name already indicates that this 88-cm-long snake lives on Aruba Island, off the coast of Venezuela. Aruba Rattlesnake has a light-brown skin with pinkish shades, reflecting the harsh conditions of its dry habitat.

Birds, rodents, and lizards are the favorite food on this snake’s menu, but they must compete for prey with much larger boas.

Only around 230 Aruba Rattlesnakes remain in the wild due to their small geographic range and humans invading their habitat. It is illegal to export these snakes, and they’re under the rigorous protection of the Species Survival Plan. 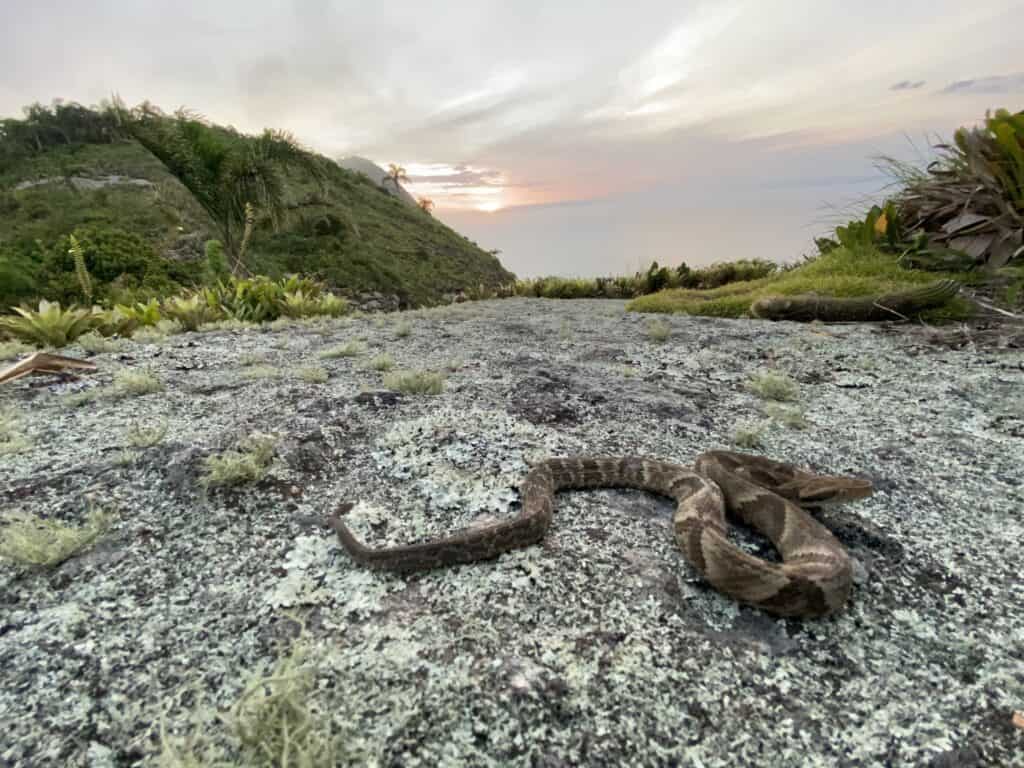 Also known as the Bothrops Alcatraz, this pitviper species only lives on Ilha Alcatrazes near São Paulo, also a Naval target practice area. Their already small habitat (less than 100 km²) is declining, but they also had to start eating centipedes and cockroaches due to environmental changes eradicating their principal food – rodents.

As a result, Alcatrazes Laceheads didn’t receive enough nutritional value, causing their size to shrink, leaving them unable to grow more than 48 cm.

Ilha Alcatrazes was once connected to the continent, but the rising oceans forced it to detach. Alcatraz Laceheads are the descendants of Bothrops jararaca, snakes who were stranded on the island after they were cut off. 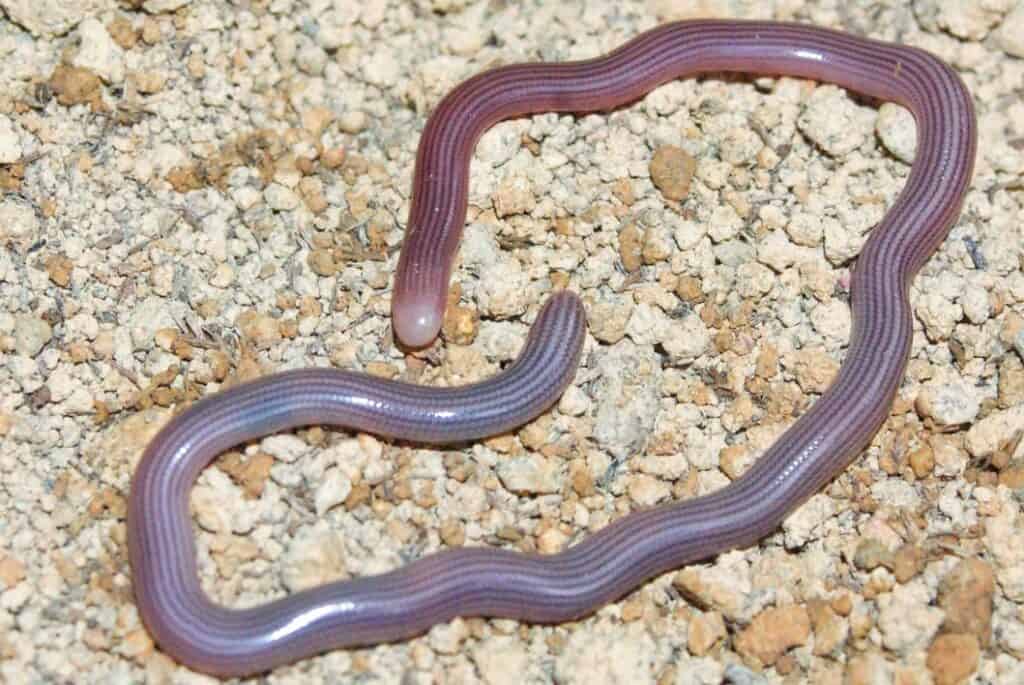 These burrowing, 50-cm-long snakes are native to Singapore, Malaysia, Indonesia, and Thailand. They have black and white stripes that alternate, giving the Stripped Blind serpent an intimidating look.

It is nearly impossible to see this snake because it lives below the ground and rarely goes to the surface, making it impressively mysterious.

For 172 years, it was believed that the Stripped Blind Snake was extinct, but it was rediscovered in 2019 along a forested biking trail in Singapore. However, the snake found three years ago was dead and a little longer than its original size. 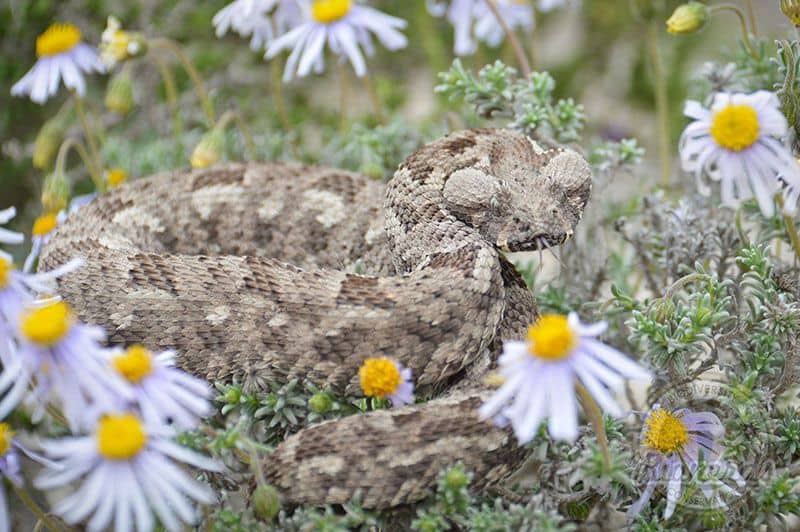 Albany Adder belongs to the viper species, has distinctive bumps around the eyes, and is 27 cm long. This brown, mysterious snake is active in late afternoons and early mornings, but it prefers to hide under a rock, and it’s hard to spot it.

Moreover, scientists questioned whether they really existed for a long time because only a dozen Albany Adders were officially documented, with the last report being from 2017.

Even though the species was discovered in 1937, it was rare to spot them. That explains why there were no cases of Albany Adders biting humans, making the severity of their venom a mystery.

This grey-brown, rear-fanged snake reached the extinction level between the 1800s and 1995, leaving only 50 individuals on the Great Bird Island. However, Fauna & Flora International partnered with other organizations to eradicate invasive species that are causing the decline of the Antiguan Racer.

Even though their effort eliminated the threat and resulted in over 1,100 new snakes across various Antiguan islands, urban development still represents danger and could decimate these snakes in the future.

Although their name would imply differently, Antiguan racers are surprisingly slow. They also don’t bite humans and only defend themselves by emitting a musky smell.

The Saint Lucia Racer is also known as the ornate ground snake and poses no threat to humans as they have a mild temperament. It belongs to the Colubridae family and owns the unfortunate title of the rarest snake in the world.

With fewer than 20 left in the wild, Saint Lucia Racers live on a tiny islet in the Caribbean Sea and share their habitat with another critically endangered species – Saint Lucia whiptail lizards.

Although extinction is still an unfortunate threat for Saint Lucia Racers, these snakes were once the second most common on the island. But after humans introduced Asian mongooses in the late 19th century, they were decimated and will likely never reach the same number.

9 Most Expensive Haircuts You Can Get!