Scientists believe there are more than 500 different species of sharks in all the oceans in the world. Given this remarkable number, sharks are one of the notorious predators and effective hunters that many fear. But even with this, sharks usually do not pose a significant threat to people, limited by their natural habitat.

The earliest fossil evidence suggests sharks’ ancestors date back to 450 million years ago. Nowadays, their lifespan is 20 to 30+ years. These boneless creatures can grow up to 60 feet in length, but most are smaller than that. They have excellent night vision and five to seven gill-slits on the sides of their heads, passing oxygen and carbon dioxide through.

Sharks are essential to marine ecosystems, but they could face extinction due to human intervention and overfishing. From the colder Indian ocean to the deepest Pacific, here’s a list of the rarest and most endangered sharks worldwide. 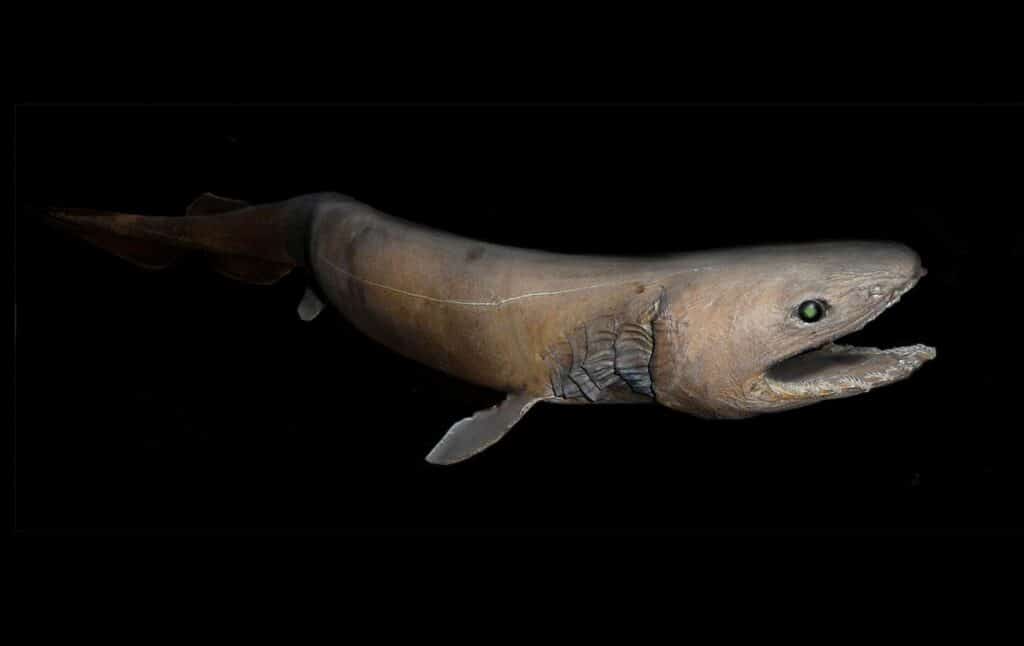 Frilled sharks are known as “living fossils” as they have been around for millions of years, living in the deepest of the ocean. They can grow to 4-5 feet, with long, brown eel-like bodies, six-gill slits on their sides, and a large, flattened head.

German scientist Ludwig Doderlein discovered these sharks around 1879-1881 in Japan, with the Southern African frilled shark being the second known species. They have around 300 sharp teeth, with up to 20 rows of teeth in both jaws. Mothers take as long as three and a half years to develop pups.

Frilled shark’s family lineage dates to the Carboniferous period that lasted from 359 to 299 million years ago, during the late Paleozoic Era. Many extinct reptiles, spiders, land snails, cockroaches, and scorpions lived in this period. 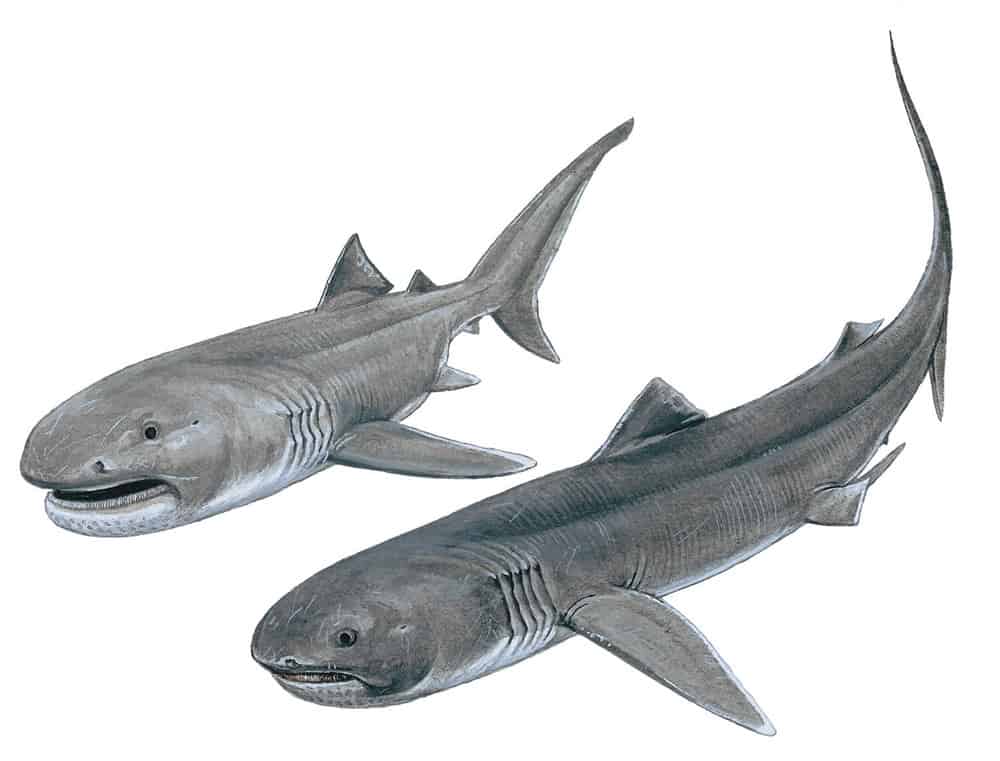 The smallest shark out of three filter-feeding sharks is the deepwater Megamouth shark, growing up to 18 feet in length. Filter-feeding sharks could swallow a person if they wished, but their diet consists of plankton they pass through unique filtering structure.

The first Megamouth was discovered just outside the coast of Hawaii in 1976. Recently, scientists confirmed 269 new occurrences of this shark after not seeing one for years. This species is known to be less active and more docile than the rest, but they like to swim back up to search for food.

Even with being the smallest of the species, it can reach up to 2700 pounds in its adult life, but there were no attacks on humans recorded as they are not ready to kill unless in danger. 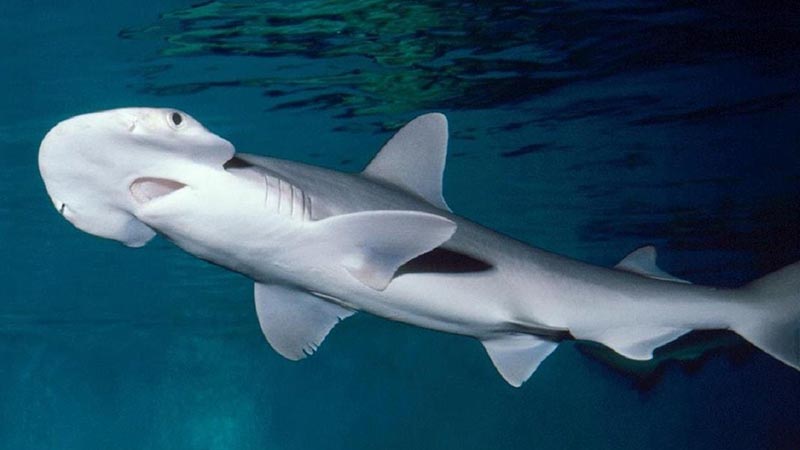 One of the smallest hammerhead sharks, only around 4 inches long, the Scoophead shark is a little-known species from this family. It inhabits the tropical waters of the Atlantic and Pacific oceans, with a broad and mallet-shaped head and a small gray-brown body.

Their teeth are small, but they have a broadly arched mouth, most likely feeding on smaller fish. Their build helps them sweep for food with more ease. Like other hammerhead sharks, scoophead pups develop inside of the mother’s body rather than hatched from eggs as other sharks do.

Due to their decreasing population, Scoophead sharks are critically endangered on The IUCN Red List of Threatened Species. They belong to the family of Sphyrnidae, named after the unusual flattened heads that extend into a familiar “hammer” shape. 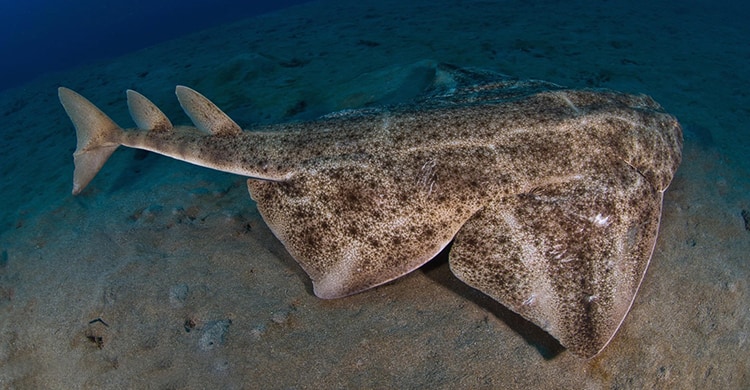 Angelshark is a part of a big family with similar features, but they are mostly known as “flat sharks”, resembling a ray or skates. They are famous for their predatory ambush to catch prey, eating bony fishes and other low-swimming creatures.

Their population used to be plentiful, but it has decreased with time. Many authors and physicians such as Aristotle, Diphilus, and Pliny the Elder have mentioned how delicious and rich the angelshark meat is and the usefulness of their skin. People have been overfishing them for these reasons for years now.

There are around 24 recognized species of this genus, but The IUCN Red List of Threatened Species added the common angelshark as critically endangered in 2019. 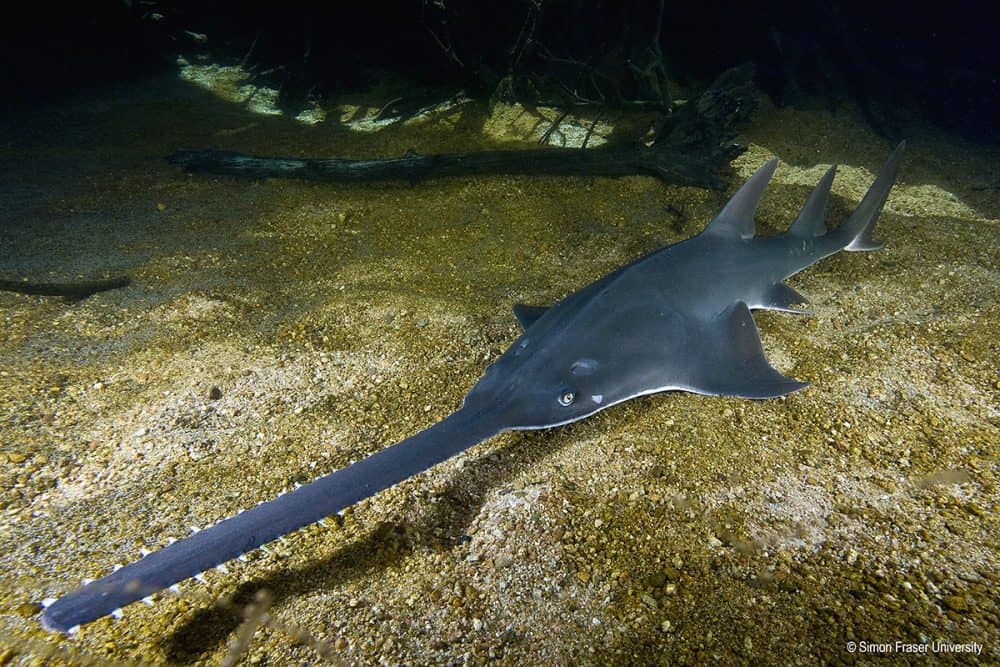 From the family of sawfish, Largetooth sawfish can reach up to 25 feet in length, most of it belonging to the long snout they have. Their “saw” nickname comes from having around 14 to 24 saw-sharp teeth on each side of their jaw.

Largetooths activate their “sixth sense” to detect electric fields around creatures in their surroundings, making it easier to find prey. Their teeth help in tearing prey apart like an actual saw. The extinction of sawfish is close due to intentional fishing for their skin, fins, and medical properties.

There isn’t a specific number of adult Largetooth sawfish, as the estimate is somewhere between 5,000 and 200 adults worldwide. Because of this, the specie was put on the IUCN Red List of Threatened in 2013 as critically endangered. 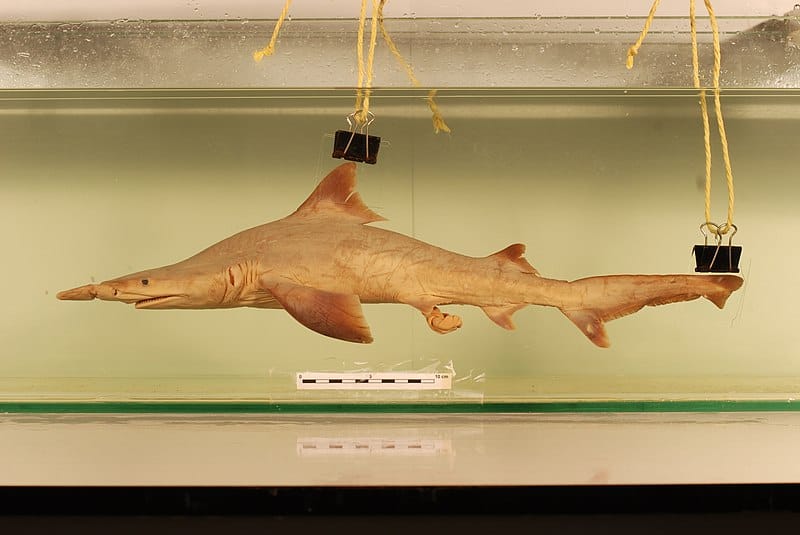 The Daggernose shark is a little-known species that is the only extant member of its family. Reaching around 5 feet in length, this shark has a long, flattened snout with large paddle-shaped fins that help them swim fast. They are also predators but usually prey upon smaller fish because of their size.

This species is critically endangered, with around 250 individuals in existence due to irregular fishing, as they get caught as bycatch in fishing for Spanish and Acoupa mackerel. People don’t have much interest in their meat or fins, so they get disposed of rather than being used.

Daggernose sharks are endemic to northern South America, from Trinidad and Tobago to Brazil. They were one of the least resilient sharks in northern Brazil, contributing to the species being on its way to extinction. 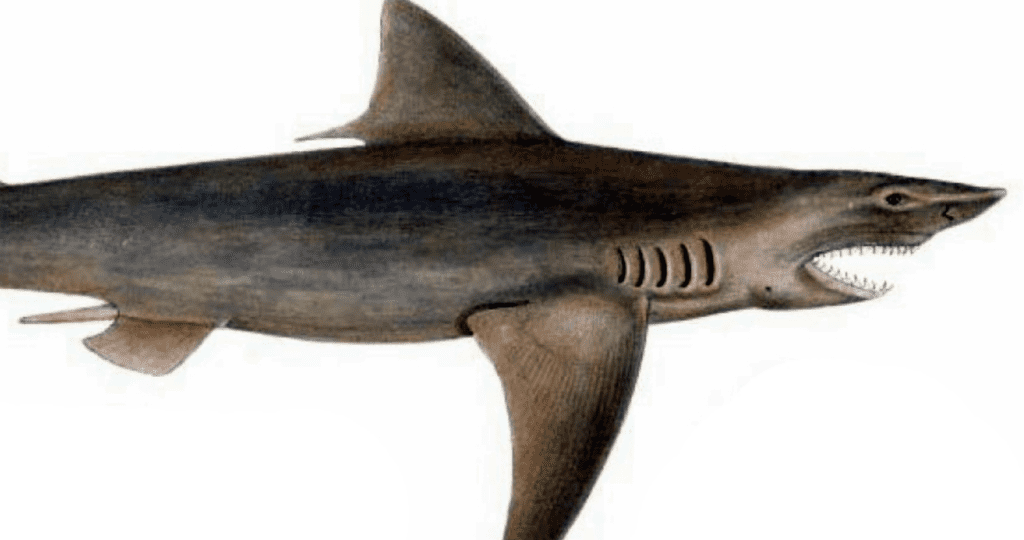 One of the rarest sharks on this list, Ganges sharks, get their name from the Padma River, where they typically live. This species is endemic to India, with less than 250 sharks believed to exist. They have a stocky grayish body, with small eyes that stand higher on their faces, allowing them to hunt without hassle.

The adults can grow up to 6 feet, with sharp and slender teeth and high-value fins that attribute most to their endangered status. Given their appearance, Ganges sharks are sometimes mistaken for common bull sharks, but unlike them, Ganges sharks are not as dangerous and vicious as their twins.

Their population is decreasing due to overfishing, habitat degradation, market value, and the building of dams. However, Wildlife (Protection) Act of India recognized their endangered status and protected them since 1972.

A rare species of sharks, Pondicherry sharks are small and stocky built, growing up to 3 feet in length. They have a unique shape of teeth with a knife-edge base and smooth edges around the tip of teeth. Like many other sharks, their diet consists of bony fishes and crabs, lobsters, and shrimp.

According to the IUCN Red List, 249 Pondicherry sharks exist. This shark is also on the “Search for Lost Species” initiative by Global Wildlife Conservation, representing species that have been lost to science for many years. The scientists hope to find more of Pondicherry sharks and prolong their lifespan.

The last Pondicherry shark was lastly seen in 1979 in India. Discovery Channel’s Shark Week special recently featured a potential finding of the said shark in a remote village in Sri Lanka, but they could not confirm anything yet. 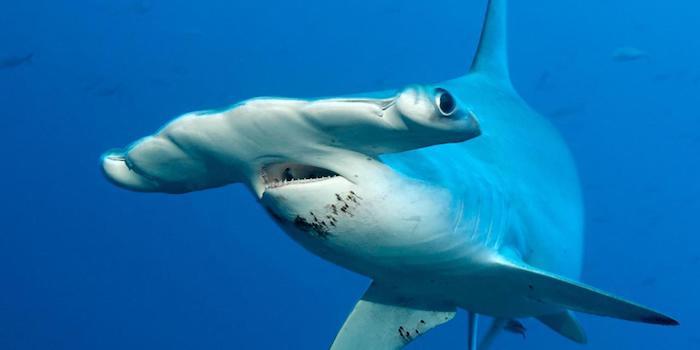 The most distinguished characteristic of this family of sharks is their specific head shape. Scalloped sharks have a complex brain and high social and cognitive intelligence that helps them feed and pick a compatible mate. They are aggressive predators as their size equals danger.

Hammerheads take up to 5% of the fin market worldwide as they are critically endangered because of commercial fishing. The population of Scalloped hammerheads has dropped by over 95% in the last 30 years as they usually end up as fishing prey. People only use their fins while the rest is thrown back in the water.

Ten hammerhead shark species are known, with the great hammerhead being the largest and the scalloped bonnethead being the smallest, another rare species from the hammerhead family. As of 2021, around as few as 200 remain in the ocean.

The rarest shark in the world right now, the so-called Lost Shark or False smalltail shark, hasn’t been seen anywhere in its natural habitat for over 80+ years. This species is possibly an extinct species of sharks, but according to IUCN Red List, around 40 adult sharks are still alive.

Only three specimens were found in Borneo, Thailand, and Vietnam, at first assigned to belong to smalltail sharks, later discovered as a new species, with the differences in fins and low vertebral count. This shark can grow up to 25 feet.

Native to the South China Sea, this shark could be extinct due to overfishing, like most endangered sharks, but scientists believe some are still around, roaming ocean floors today.

8 Rarest Types Of Pearls Found In The World