8 Rarest Types Of Pearls Found In The World

Pearls symbolize femininity and warmth. They have been loved by people from different cultures for centuries. What makes pearls unique is that it is the only gem sourced from living organisms.

Pearls can be of various colors, sizes, and shapes. Traditionally, white, symmetrically round, naturally occurring pearls were considered the most coveted of all.

Natural pearls are still extremely rare. Only one in 10,000 wild oysters yields a pearl, and only a fraction those achieve the desired color, shape, and size.

The pearls that we get to see today, a vast majority of them are cultured pearls. They are genuine pearls produced by an oyster or mollusk with human intervention.

Here we list 8 of the rarest types of pearls that you can find today. 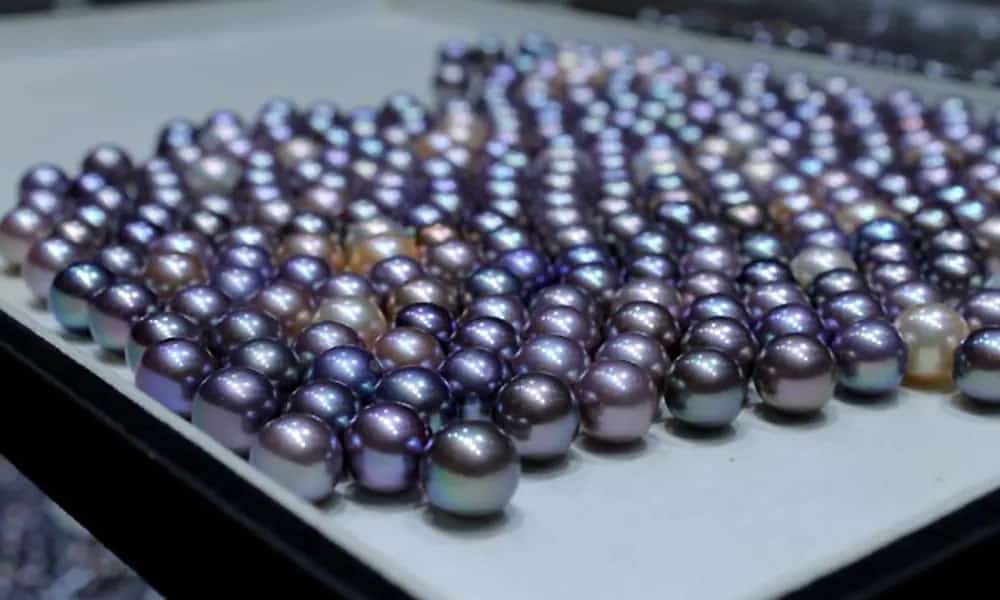 The Edison pearl is one of the newest Freshwater pearls. It has been in the market since 2014. These are large pearls grown at pearl farms in China. The production process of Edison pearl is not revealed; however, it is known that cross-breeding is used.

The diameter of Edison pearls ranges from 13mm to17mm. They can grow so big because they grow alone. Edison pearls can be of different colors, but the purple ones are the rarest. The other colors available are white, pink, plum, and cream.

Edison pearls are known for their metallic luster and beautiful round shape. These pearls are expensive but cheaper than sea pearls. Each Edison pearls take 2 to 3 years to grow.

Edison Pearl is named after American scientist Thomas Edison. While commenting on his research, he once said, “There are two things you can’t get in my laboratory – diamonds and pearls.” 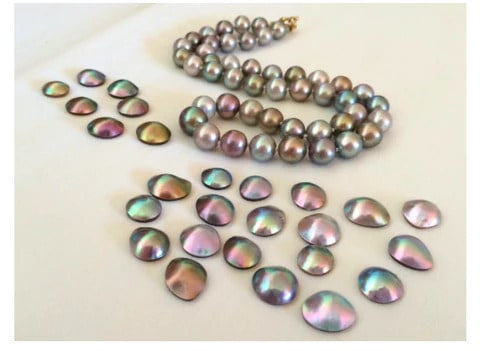 Pearls cultured in the Sea of Cortez are the rarest cultured pearls in the world. They are produced on only one farm located in Guaymas, Mexico. This farm produces around 4,000 pearls each year, including whole pearls and mabé pearls.

The size of Cortez pearls ranges from 8mm to 12 mm; larger ones are rare, though. These pearls can be of a range of colors, including, Bluish-green, Pistachio, Mauve, Aubergine, Copper, Lime, and Black.

Pearls from the Sea of Cortez are the only cultured pearl that glows under UV lighting. 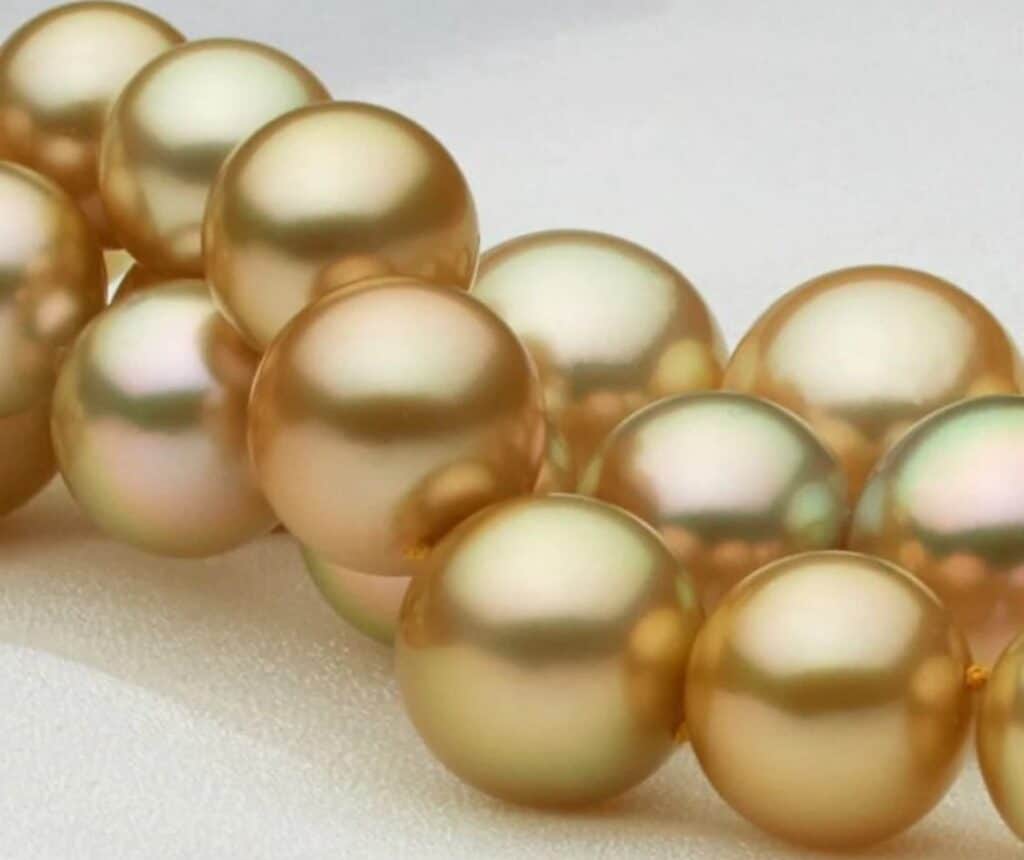 South Sea pearls are large in size, ranging from 8mm to 20mm. The average size is around 10mm to 15mm, and anything above that is considered rare.

These pearls are valued for their beautiful golden color and satiny luster. The highly-priced Golden South Sea is perfectly round and symmetric. However, most of the pearls that are harvested are usually baroque shaped.

The nacre layers of South Sea Pearls are the thickest among all the saltwater cultured pearls. This thick nacre layer is responsible for the silky luster of these types of pearls. 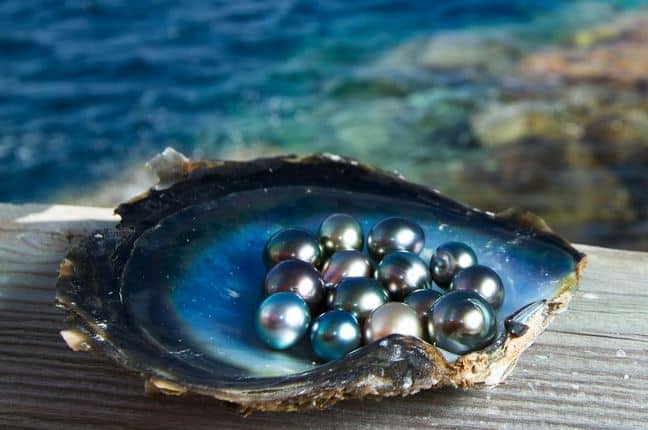 Tahitian pearls, also known as Black pearls, are produced by the black-lipped mussel Pinctada margaritifera.
This pearl is valued for its naturally dark tones. However, a true black Tahitian pearl is extremely rare. The Tahitian pearls that are considered black are actually silver, dark green, or charcoal grey. All Tahitian pearls have tinge of undertones of silver, blue, green, pink, and yellow.

Tahitian pearls are usually bigger in size than the average cultured pearls. The average size ranges between 7mm and 18mm. It can come in various shapes, including round, near-round, button, oval, circle, teardrop, and baroque. 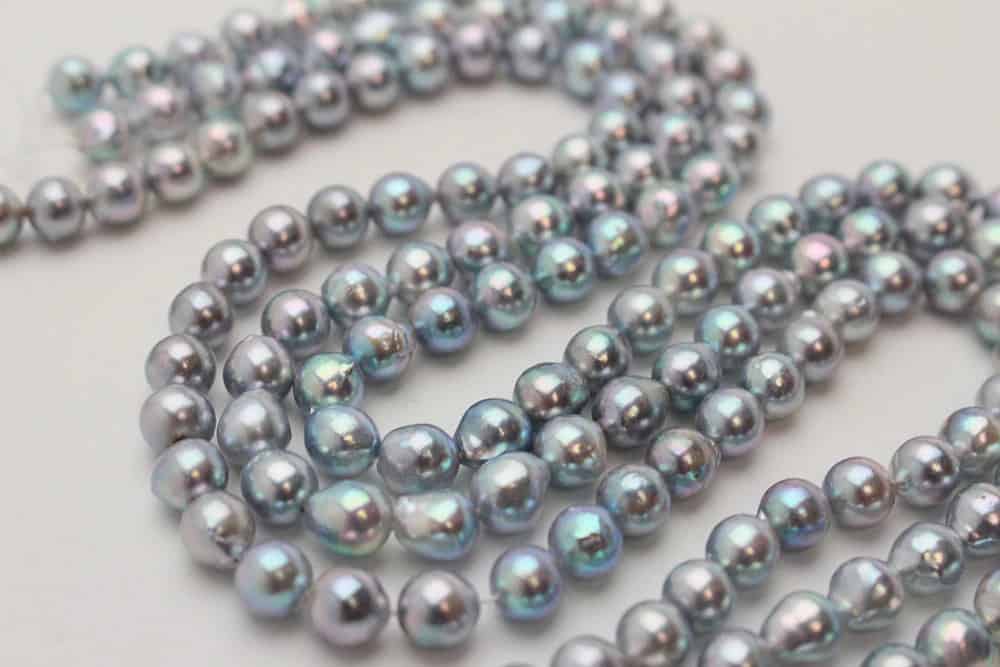 Blue Akoya pearls are rare because, for years, they have been discarded by the farm owners. The main reason was the free-form baroque shape of these pearls. Besides, most naturally colored blue Akoya pearls lack the required nacre thickness and do not survive for long. Even when they do, you will notice peeling nacre and white nucleus within a few years.

However, the mindset towards the blue Akoya has changed in recent years, and jewelers are now taking an interest in them. A high-quality blue Akoya can be identified by its deep blue color and intense overtones. They have thick nacre and can be used in jewelry like any other pearl. These pearls are rare to find and considered exceptional.

Japanese pearl producers believed the blue baroque pearls would ruin the reputation of their perfectly round white Akoya pearls and didn’t want them on the market. They would either destroy them or use them as medicine. 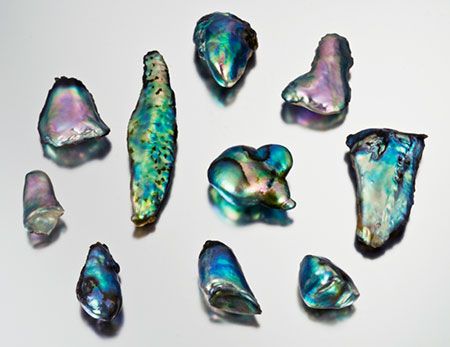 A certain type of rock-hugging snails living in rocky, cold coastal waters produces these pearls. One in every 1000,000 snails yields an abalone pearl, and thus, it becomes extremely difficult to find them. Besides, these pearls are usually too fragile to be used in jewelry. They also often develop cracks that run lengthwise.

An abalone pearl requires about 8 to 10 years to develop. However, most abalone snails are fished within the first four or five years of their life, and thus, they do not get enough time to form a pearl. 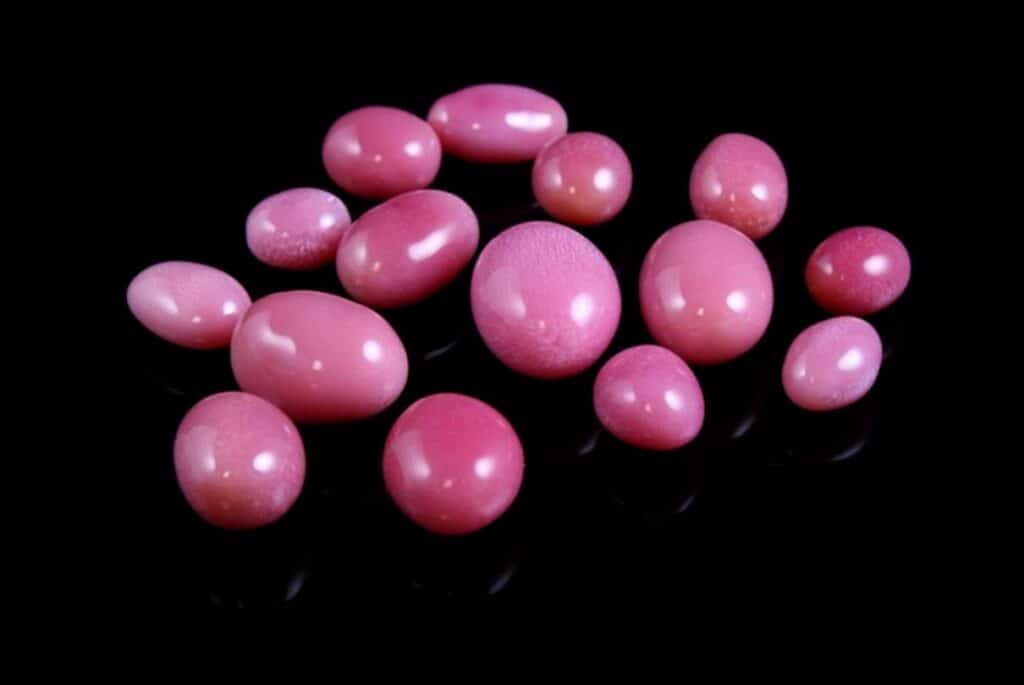 Conch pearls are extremely rare and only produced naturally. It is produced by the queen conch mollusk that grows in the tropical water of the Caribbean. These large edible sea snails can be found off the coasts of the Bahamas and in the Gulf of Mexico.

Conch pearls are usually oval-shaped and pink in color. The most coveted tone for conch pearls is dark pastel pink. The finest examples display wave-like flame structures and have unique shimmer.

Only one in every 10-20,000 shells produces a conch pearl, and less than 10% of them can be used in jewelry. Besides, since 1992, the queen conch has been on the list of the Convention on International Trade in Endangered Species (CITES) agreement. All these factors together make conch pearls extremely rare as well as expensive.

Technically, conch pearl is not a pearl in the true sense as it is not produced by an oyster. It is not made of nacre and thus lacks the sparkling luster of traditional pearls. 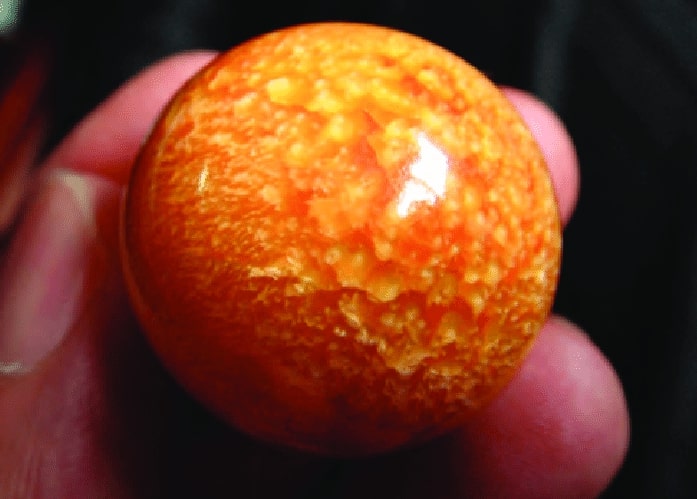 
Melo Melo pearl is known to be the rarest pearl in the world. This pearl is produced by a sea snail as opposed to an oyster. The sea snail producing this rare gem is known by various names such as Melo Melo, Sebra sea snail, Bailer shell, and Bailer volute.

These sea snails can be found in Southeast Asia- particularly in the South China Sea and around Myanmar, Thailand, Cambodia, and Vietnam. In Myanmar, the Melo Melo sea snails are called the coconut shell due to their similarity in appearance.

The color of Melo Melo encompasses a range of hues from pale yellow to light tan to fiery orange. The most desired and valued Melo Melos are dark, intense orange in color. The color may fade with time, especially if exposed to direct sunlight.

The shape of Melo Melo pearls is usually perfectly spherical, and they come in a range of sizes. Reports suggest some Melo pearl can be as big as a golf ball.
It is estimated that only one several thousand Melo Melo sea snails yield a pearl. It is even more challenging to find a pearl that has the perfect orange hue.
The average cost of high-quality, unmounted Melo Melo pearl is more than $75,000. The price of a mounted pearl can be as high as $250,000.

Several attempts were made to culture Melo Melo pearl,s but none of them could achieve the desired result.

10 Most Expensive Types of French Bulldogs