Lions are among the highest predators. That means they are at the top of the food chain. However, still, their existence is threatened in today’s world.

The lion is categorized as vulnerable in the International Union for Conservation of Nature (IUCN) Red List of Threatened Species. Illegal poaching, habitat loss, dwindling prey, and human-lion conflict are some of the leading causes of the disappearance of this majestic animal.

While the lion as a species is categorized as vulnerable at a global level, some subpopulations are more endangered than others.

Here we list 8 of the rarest lion subspecies that exist today. 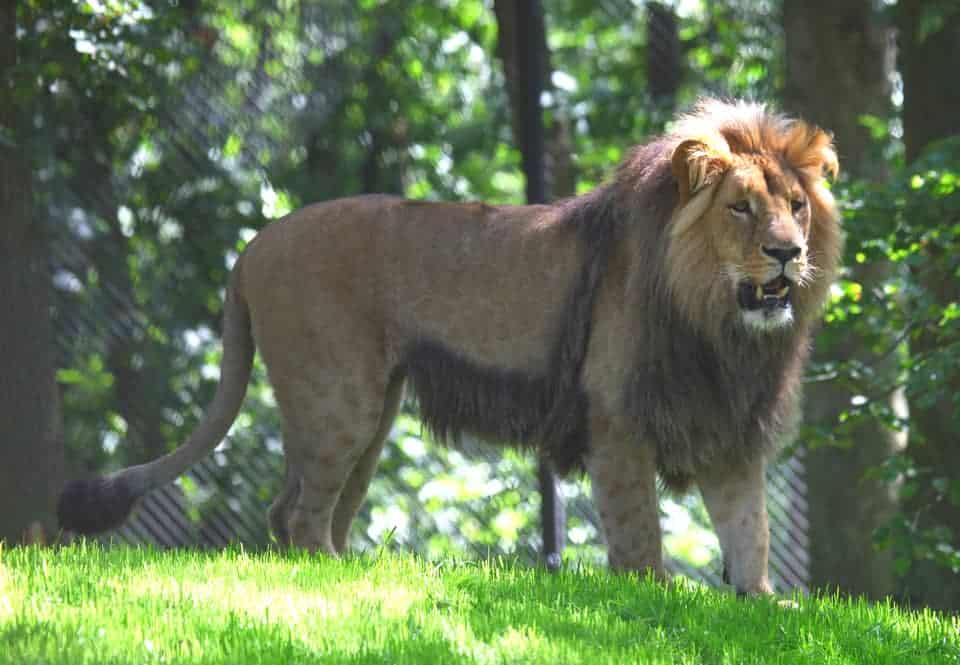 Katanga Lion is the regional name of the lion subspecies found in Southern and East Africa.

The fur color of the lions in this region ranges from light buff to dark brown. The average body length of an adult male lion ranges between 8 ft 1 inch and 9 ft 4 in.

This subspecies became nearly extinct in parts of their historical range. Trophy hunting, killing by locals out of fear, illegal trade, and loss of prey and habitat are some of the leading causes that threaten their existence.

In East African range countries, the population has declined significantly. However, since the beginning of the 21st century, conservation efforts have been undertaken in Namibia, Zimbabwe, Botswana, and South Africa. It helped increase the total number.

Lions can go without drinking water for up to four days. However, they drink water every day if available. They can drink water from plants and survive on it in dry regions. 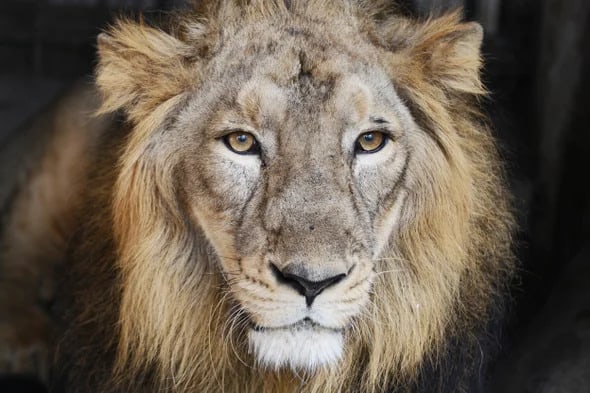 Asiatic lion is a rare subspecies of lion that can only be found in the Gir National Park and its surrounding area in India. Until the 19th century, the Asiatic lion used to range from Saudi Arabia to the eastern part of India.

These lions are slightly smaller than their African counterparts, and the male lions have relatively short, sparse darker manes. One of the distinctive features of Asiatic lions is their longitudinal skin fold that runs across their belly.

Asiatic lion is listed as endangered on the IUCN Red List due to its small population size and restricted area of occupancy. However, conservation efforts could successfully increase the population of this rare lion. In 2015, the population was estimated at 523 individuals. The census conducted five years later in 2020 showed that the number was increased to 674, an increase of 29%.

However, in the following two years, a total of 283 lion deaths were reported in Gir forest.

Unlike African lions, male Asiatic lions do not live with the female lions in the pride except for the mating season. 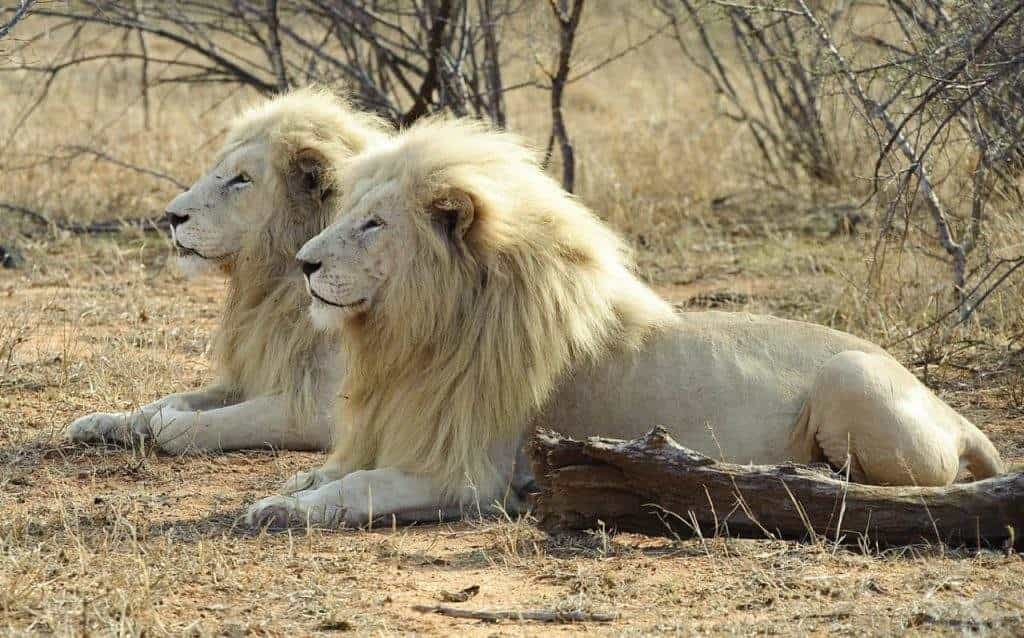 White lions get their white or blondish white fur from a rare genetic mutation. They are not albinos. The coloration is caused by a recessive gene resulting in reduced pigmentation.

White lions are exceedingly rare. They were considered to have been extinct in the wild from 1992 to 2004. In the 1930s, Europeans got to know about these unique lions. They artificially removed the lions from their natural habitat with the intention of captive breeding and hunting. The gene pool was further depleted due to the trophy hunting of the male lions.

Later in 2004, these lions were successfully reintroduced into the wild by the Global White Lion Protection Trust. Currently, White lions can be found in Timbavati Private Nature Reserve and the Greater Kruger region. It is estimated that only 13 White lions are there in the wild and around 300 in captivity.

Unlike albinos, White lions have dark patches on their noses and behind their ears. Their eyes are usually blue or golden, while the albinos have red or pink eyes.

Although White tigers are extremely rare, with only 13 individuals in the wild, they are not considered critically endangered. It is because they are classified as Panthera leo and not recognized as being different. 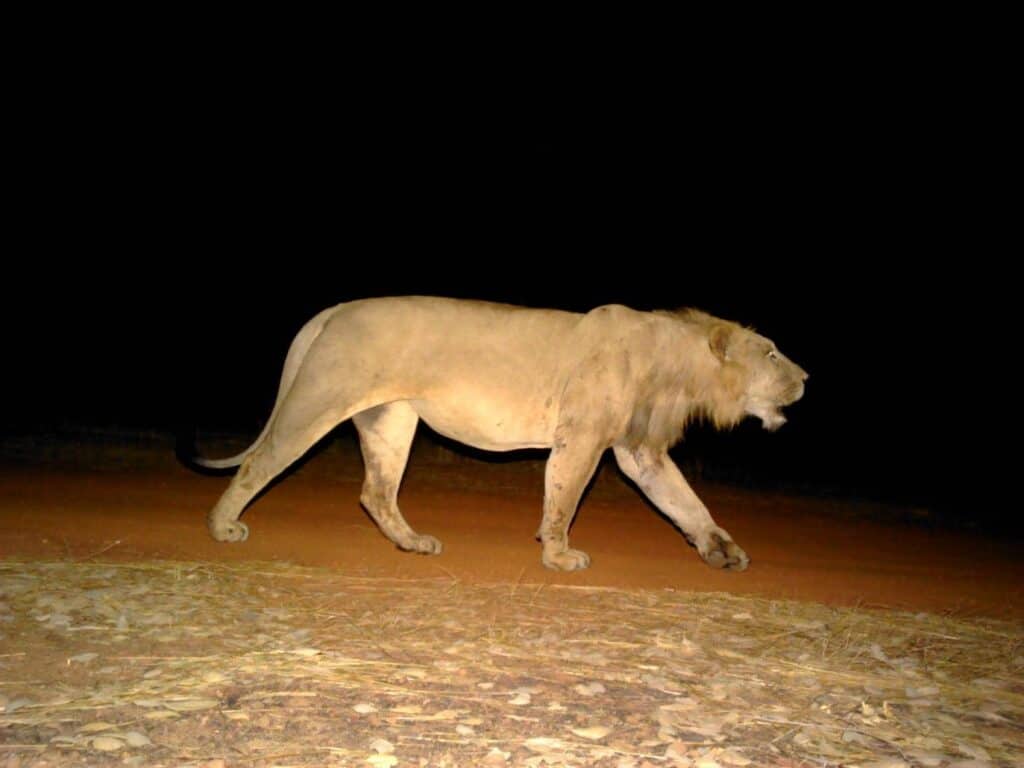 The lion population found in Nikolo-Koba National Park, Senegal is smaller and genetically distinct. This subspecies is called the Senegalese lion or West African lion.

The last surviving population is in the W-Arly-Pendjari Complex, a UNESCO World Heritage Site covering three national parks in Burkina Faso, Niger, and Benin. The total number is estimated between 246 and 466. The population has decreased by 99%.

However, a camera survey showed that these lions do not tend to avoid hunting areas and human encounters. Experts believe high-quality habitat and plentiful water found in the hunting areas are key reasons for the lions to frequent these areas. It makes the conservation of this rare subpopulation even more challenging.

It’s the female lions who do most of the hunting. However, the male lions eat first. They also eat more than their female counterparts. 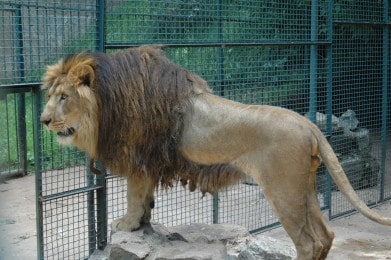 This unique subspecies is smaller, more compact, and has large, dark manes. The manes continue under the torso and along the belly. In 2012, scientists discovered this lion species in Addis Ababa Zoo.

DNA samples collected from the captivated lions confirmed these lions carry a rare and unique gene. The ancestors of these animals were captured by the former emperor of Ethiopia, Haile Selassie, and kept in a private zoo.

Later in 2016, scientists found an entire population of this rare subspecies in a national park located in the north-western part of Ethiopia, near the Sudanese border. It is estimated that around 100 to 200 Ethiopian lions still survive in the wild.

In pride, the cubs are raised together, and lionesses often nurse the cubs of other lioness’s cubs. 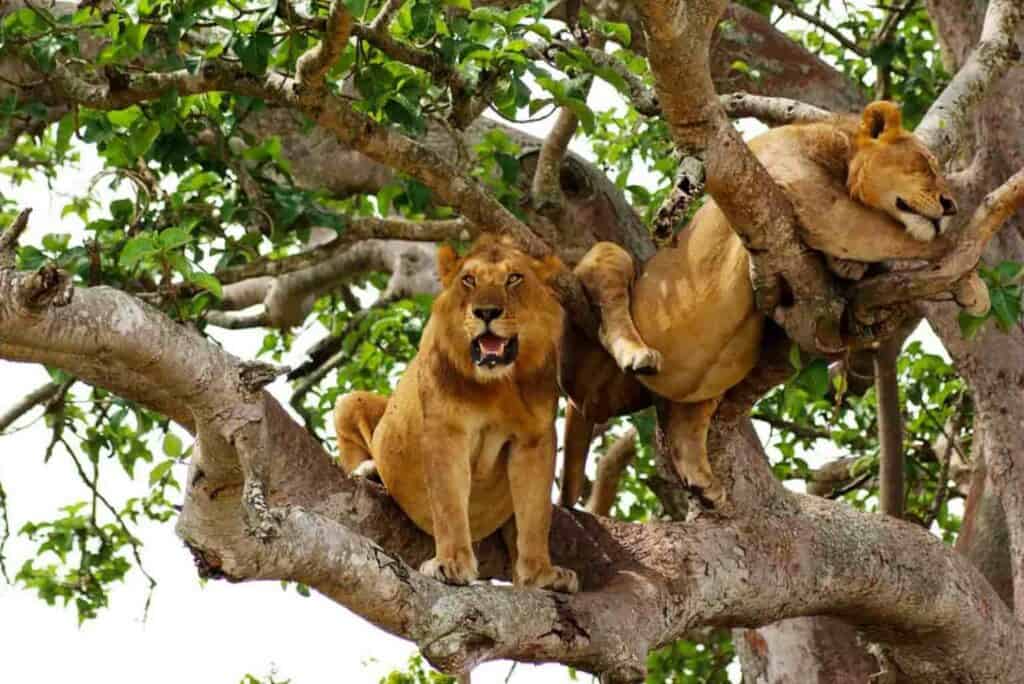 Uganda lion, also known as the Northeast Congo lion, is a unique subspecies that climbs trees. Even the adult lions, both male and female, climb the tree and fall asleep in the branches.

These lions face all the usual threats, including habitat loss, human intervention, snaring, and others. Despite all the conservation efforts, six of these unique lions were killed in Uganda in 2021.

These lions are big in size. The fur on the body is of solid color, light brown or yellow with a golden tinge. The mane of the male lions is a thick and darker shade of brown, sometimes even black.

Although tree-climbing lions are only found in Uganda and Tanzania, scientists believe they are not originated in this region.

The Barbary lion was native to the Atlas Mountains in North Africa. They lived in the mountains and deserts of the Barbary Coast, stretching from Morocco to Egypt.

These lions are now believed to be extinct in the wild. That means no individual Barbary lion can be found in their natural habitat. Uncontrolled hunting, habitat loss, and respiratory diseases are some of the known causes leading to their extinction in the wild.

Studies revealed that a small group of Barbary lions may have survived in Algeria and Morocco until the mid-1960s. Today, these lions can only be seen in captivation, mostly in zoos. Scientists believe that Barbary lions can be reintroduced to the wild with a thorough and long-term plan.

Barbary lions have thick, dark and long manes spreading over their shoulders. The color and length of their manes can vary from one individual to other. Their body color ranges from light to dark tawny.

Barbary lions were kept in royal palaces in several north African countries as a symbol of power and strength. Their look and size were greatly admired and often mythologized. However, their fame was not restricted to African nations; they were also taken to Rome to battle gladiators in Roman Coliseum. 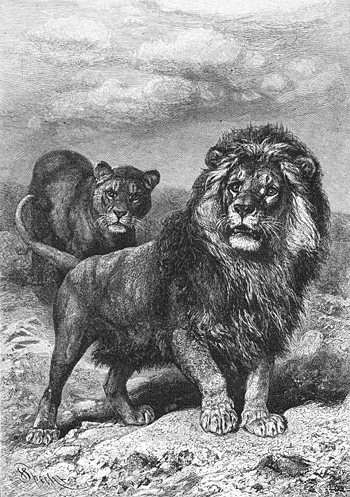 The Cape lion is the rarest type of lion ever, but it is considered extinct. The last adult specimen of a Cape lion was spotted in the wild in 1858. The animal was shot in South Africa. A couple of decades later, an explorer captured a cub, but that didn’t survive for long.

These lions had long black manes extending beyond the shoulders and under the belly. They also had large ears with black edges. These lions lived in the Karoo plains and around the Northern Cape region.

In 2000, specimens believed to be descendants of the extinct Cape lion were discovered in Russia’s Novosibirsk Zoo. John Spence, a zoo director from South Africa, brought two of the specimens to Tygerberg Zoo.

Spence planned to perform genome testing to determine whether these specimens were indeed descendants of Cape lion. However, Spence died before he could conclude his studies. The zoo was closed down in 2012, and the lions were sent to Drakenstein Lion Park.

Most of the Cape lions were shot and killed by European settlers during the early 19th century.