Tuna is probably the most versatile fish in the cooking world. Millions of pounds of it are sold and eaten every year in cans that cost a couple of bucks from any local Walmart. Meanwhile, fish ostensibly from the same breed sell for thousands of dollars off the docks of the markets in Oma, Japan. This is because the species of tuna, the freshness, the size, and the region all have a huge impact on the quality of the meat.

Most of this fish is flaked and canned in its own juices for sandwiches, salads, and cat food mixes. Other times, the fish is so fatty, firm, and meaty that it can be sliced and seared like steak, or served raw as Japanese sashimi.

There are several distinct breeds of tuna that are caught and sold at wildly different prices. We compiled them in this list of the 5 most expensive kinds of tuna, demonstrating that even a humble fish can reach extreme luxury prices when the conditions are just right. 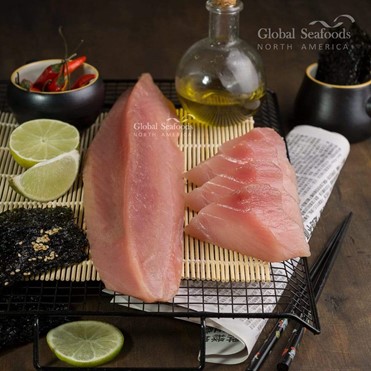 Albacore tuna is white tuna most often sold in cans in grocery stores across the world for next to nothing. However, large, fresh albacore tuna can still be cooked as a mid-range luxury ingredient, which can sell as large 10-pound fillets for up to $195, such as this sashimi-grade loin from Global Seafoods North America.

Albacore tuna is commonly caught fresh in the South Pacific and Mediterranean waters, such as those around Fiji and Hawaii. Its market prices are generally very low since the fish only reaches a maximum of 45 pounds in size, which is tiny for tuna. This means that after the skin, bones, and fins have been removed, there isn’t a ton of usable meat compared to its larger brethren. Despite this, albacore tuna is rich in protein and Omega-3 fatty acids, especially compared to other fish in its weight class.

“Sashimi-grade” or “sushi-grade” are meant to be meaningful statements on a tuna’s quality. It means that the fish market selling the fish has designated it as safe to eat raw, which for albacore tuna is a rarity since so much of it is frozen and canned. Tuna marked “other” is of lower quality and is instead used in salads and other lower-quality preparations. 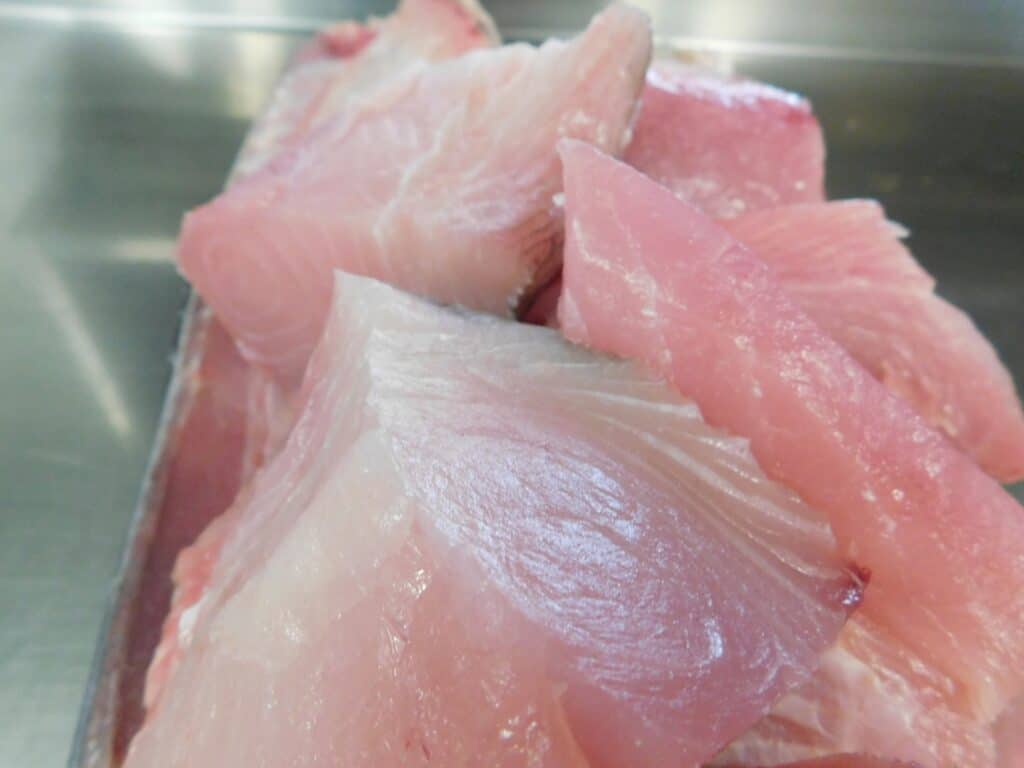 Dogtooth tuna is a fish that can reach 130 pounds in the wild and has a dark red, firm meat with a mild flavor. Of all the tuna on this list, dogtooth is the least commonly eaten. This is because adult dogtooth tuna are ciguatoxic. This means that they contain a potentially dangerous compound called ciguatoxin, which cannot be tasted, smelled, or affected by the cooking process. Consuming enough of this toxin can result in neurological effects that can cause heart contractions, sensory changes, or even paralysis.

For this reason, adult fish are rarely caught and served. But in the right conditions, young dogtooth tuna can be canned and frozen or used as bait to catch more valued prey such as black marlins.

Dogtooth tuna are most commonly found off of Southern Japan on islands like Okinawa. Other opportune spots to find them include the Maldives, Nicobar Islands, and Bali, as well as other locations throughout the Indian Ocean and the Coral Sea. 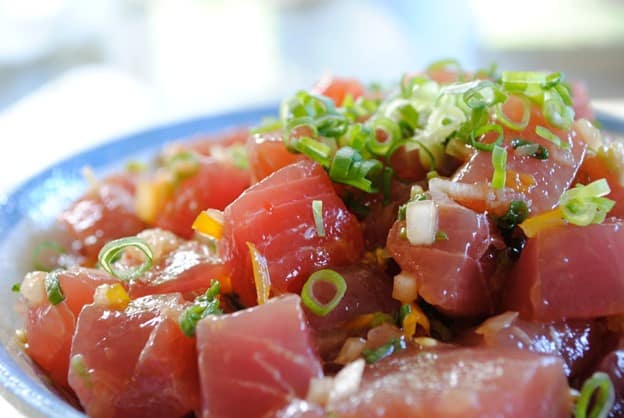 Yellowfin tuna is more commonly known as “ahi” and is often sold in restaurants as sashimi, sushi topping, steak, and garnish. This tuna is light pink with dry, firm meat that has a noticeable fat content compared to other cuts, though it is still much leaner than bluefin tuna (see below). Overall, its flavor has more of a “tuna” flavor, which is considered to be lower quality than its meatier alternative.

Though common, high-quality yellowfin tuna can be $30 per pound or more. Its body is dark, metallic silver, which stands out against the yellow pectoral and tail fins for which the fish is named. Yellowfin tuna is known for being a versatile cooking ingredient, tasting great whether you broil, grill, sear, or smoke it. The right piece can even be eaten raw as sashimi or sushi. Be sure to buy tuna that is specifically marked as sashimi-grade. Anything else will be marked as “other” and should not be eaten raw.

Yellowfin tuna is firm and dense like a loin of beef and can be sliced like one. A wild yellowfin or ahi tuna can weigh up to 400 pounds and is packed with tons of natural vitamins and minerals, including a full dose of protein and Omega-3 oil (this is why it’s called “fish oil” to begin with). 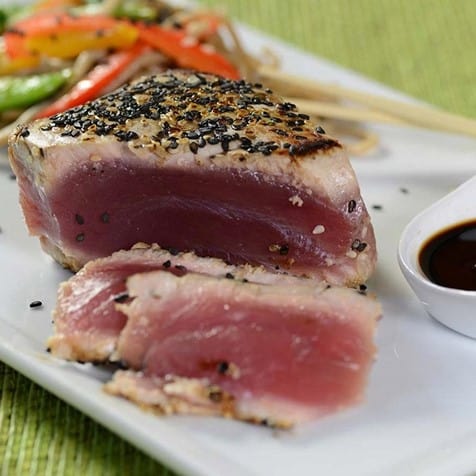 Bigeye tuna grows up to 400 pounds in size in the wild (the largest ever caught weighed 392 pounds) and can be found swimming in nearly any open temperate or tropical oceans in the world. It especially thrives in the tropical Atlantic regions, with the exception of the Mediterranean Sea. At its maximum size, this fish will be eight feet in length, with long, bony pectoral fins.

The meat of the bigeye tuna is dark red, almost purple in color, with a higher fat content than yellowfin tuna, which gives it a thick, oily texture that tastes less like fish and more like meat. From the Gourmet Food Store, skin-off bigeye tuna filets from French Polynesia can be bought for $64.66 per pound.

This breed of tuna can survive in deep, cold water, including water low in oxygen. They can also see brilliantly well in low-light waters due to a large, round lens in their eyes that has adapted to even the lowest light conditions.

They have long, metallic blue bodies with white underbellies. They can also live up to 15 years in the wild when they are not caught and eaten. 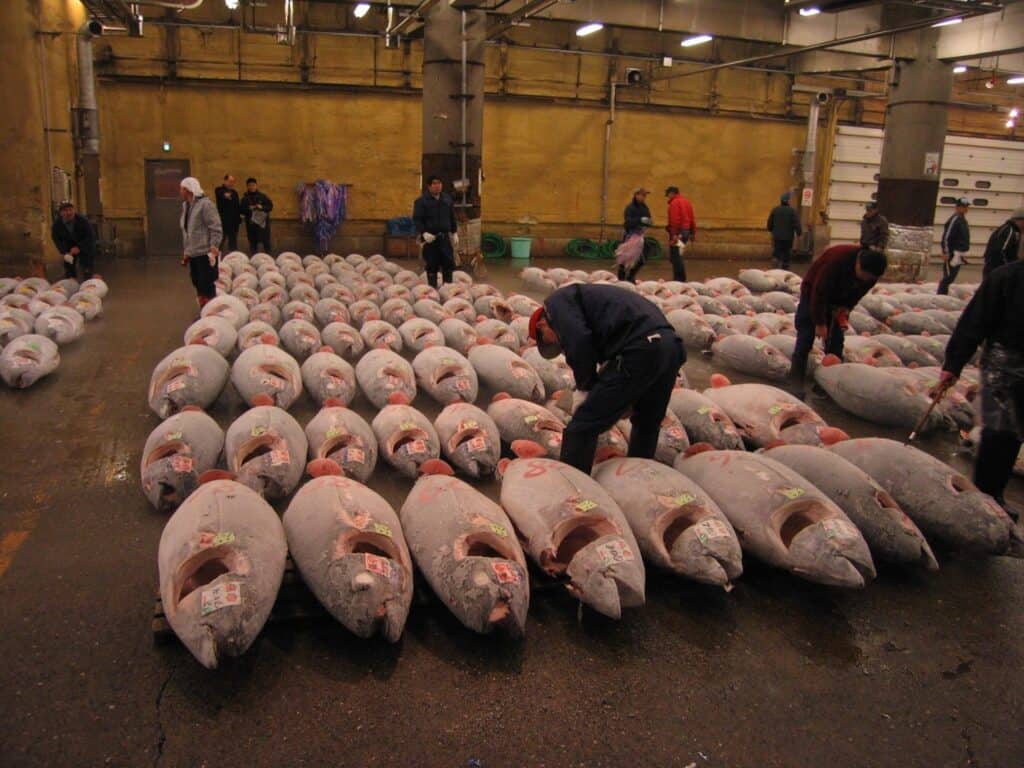 The most expensive tuna is Bluefin tuna. It is the Ferrari of tuna, the absolute height of luxury for this already coveted fish. It’s the dark, ruby-red tuna that is served as sashimi or steak at the greatest sushi restaurants in the world. It’s as meaty as beef and as firm, fatty, and flavorful as any fish in the world.

Bluefin tuna caught from the seas around Japan are auctioned directly off the docks to the local markets and high-end sushi restaurants. In 2013, one of these fish, weighing 489 pounds, was sold to a local buyer for $1.8 million. That’s not even the record price listed here, which was in 2019 when a 612-pound tuna sold off the dock for $3 million, the equivalent of about $4,900 per pound.

Bluefin tuna is so meaty and flavorful that restaurants often serve it raw. They call it “kuro maguro” when served this way. The best restaurants get their ruby-red tuna steak from fish sold at the Tsukiji fish market, which often weigh more than 400 pounds apiece.

Locally sourced, cheap bluefin tuna from other sources can cost as little as $40 per pound, such as those caught off the coast of Boston. The average good catch off the shores of Oma in Japan by contrast costs $200-$400 per pound, even when they’re not breaking world records.

Tuna is one of the world’s most recognizable budget foods as well as one of the most coveted luxury ingredients. That spectrum of quality has made it essential to clarify what tuna you’re talking about when you say “tuna,” which could be anything from canned albacore white tuna to a 600-pound bluefin masterpiece off the coast of Japan. Regardless, it’s any culinarian’s dream to try all these magnificent fish and learn the difference for yourself.