Before making this list, we have to lay a little groundwork in terms of definitions. By “meat,” we mean the edible flesh of an animal. This includes the meat of cows and chickens but also sea life like fish, eels, and oysters. Some delicacies, such as caviar, edible bird’s nests, and other eggs are expensive, but they are not included on this list since eggs and other bodily fluids are not technically meat.

If you’re a connoisseur of expensive proteins, you’ll want to search the globe for a way to enjoy these meats, the 8 most expensive per pound in the world. That’s another thing – since we calculated it all per pound, some of the smaller animals get a little boost up the list. But these are all the best of the best. 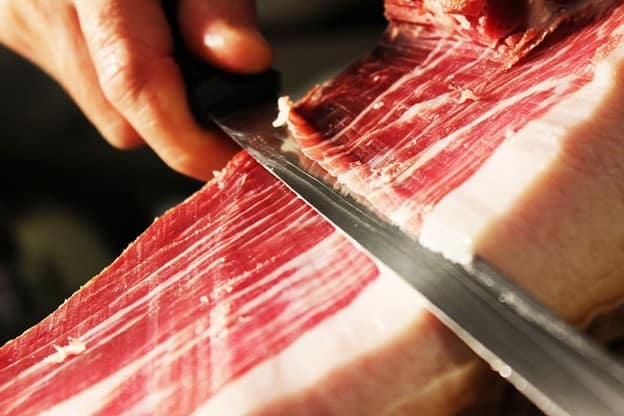 Iberico ham, in its native Spain called “Iberico de bellota,” is ham procured from acorn-fed pigs and the most expensive pork product in the world. A single leg of Iberico ham can cost about $4,500. Factoring in the average weight of a leg of ham at 15 pounds, that leads to an average of $300/pound.

This ham is expensive not only because of the rarity of the black Iberian pig, which grazes but rarely on a peninsula in Spain and Portugal but also because of its prestigious production at the ham factories in Seville.

Black Iberian pigs have been considered rare and delicious since ancient times. In 77 A.D., Pliny the Elder, a Roman writer, documented the meat’s quality. Christopher Columbus even had them on his ship in 1493 (voyage number two). 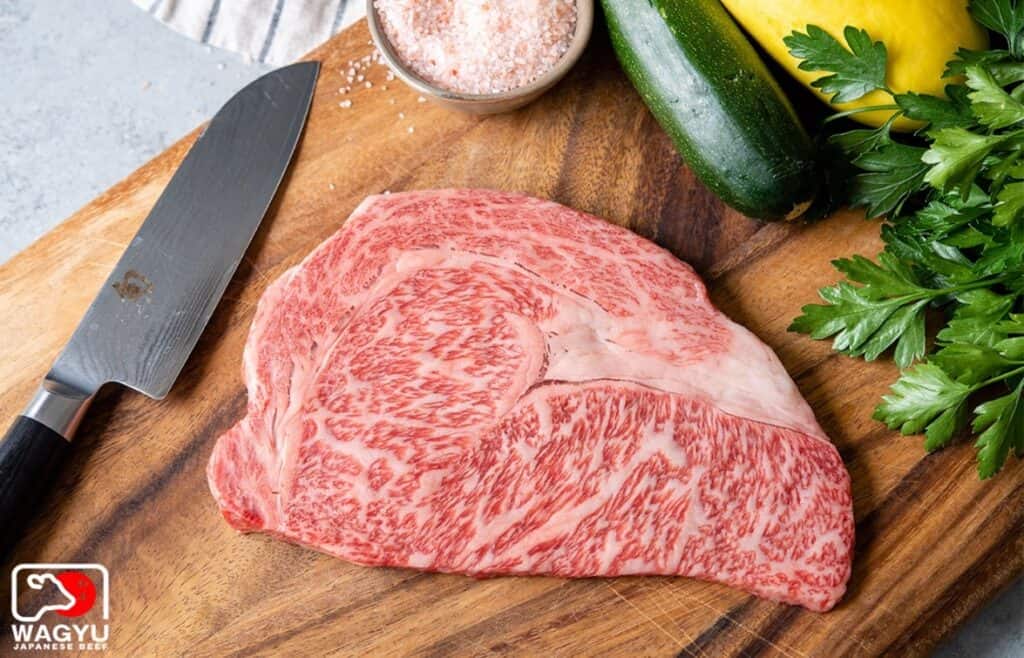 Olive wagyu beef at this point is nearly a fairytale due to its rarity. The fine-grain marbling of this meat, combined with the cows’ olive diet, produces an expensive cut distributed, though rarely, by the Kagawa Prefecture in Japan.

Since olive cultivation in Japan only began in 1872, this meat is relatively new, with olive pulp being used as a foodstuff for cattle for the first time in 2006. Americans didn’t get a taste of the stuff until 2018. They pay upwards of $300 per pound to taste it.

Due to a diet of olive pulp, the cows that produce the Olive Wagyu meat have a high oleic acid content in their bodies. This heart-healthy fat, a cornerstone of Mediterranean diets, makes Olive Wagyu beef healthy as well as delicious. 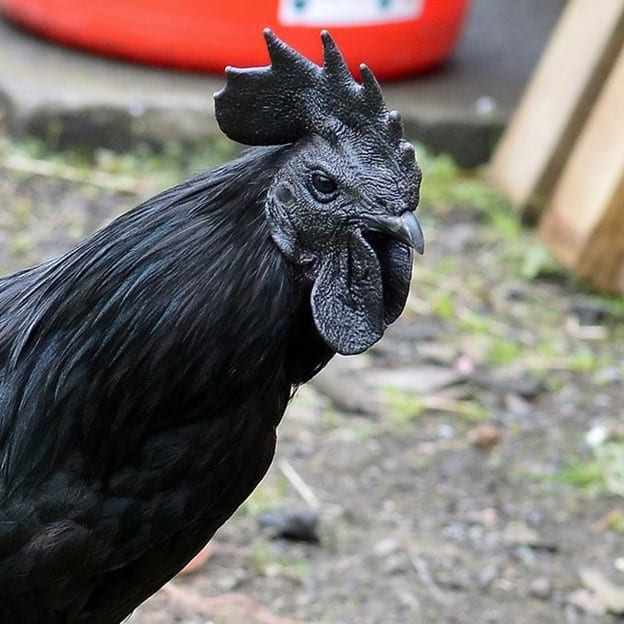 Here we have the least expensive meat in general – the humble chicken – elevated to one of the most expensive meats ever sold. The rare Ayam Cemani is a black chicken from Indonesia. Its thighs are incredibly buff, making them prized for cockfighting and racing.

Not only are the feathers and meat of this chicken black but so are their beak, tongue, and wattle, which is the jiggly fleshy thing on their heads that’s normally bright red. Even their internal organs are black! 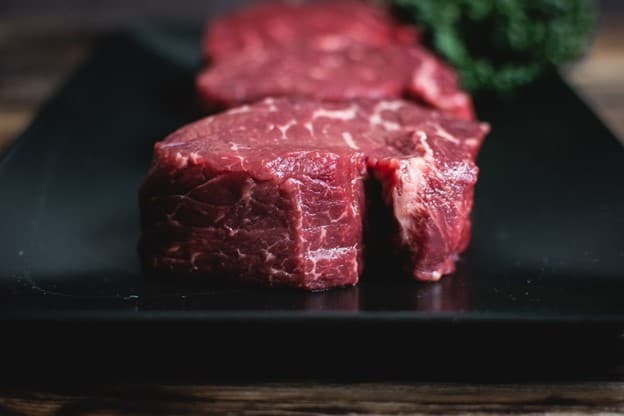 Kobe beef is famous throughout the world as the most delicious and expensive beef (though we’ll see later that this isn’t quite true!). It remains some of the most expensive meat ever sold, regardless. Straight out of the Hyogo Prefecture in Japan, the Tajima Black cattle have been raised for centuries to have tender, textured, marbled meat. The meat is often served seared, charcoal grilled, or even sashimi-style.

Expect to pay premium prices, up to $850 per pound, for real Kobe beef steak. If a restaurant is selling it cheap, it isn’t real – only a few are allowed to import it from Japan and even fewer can do so regularly. 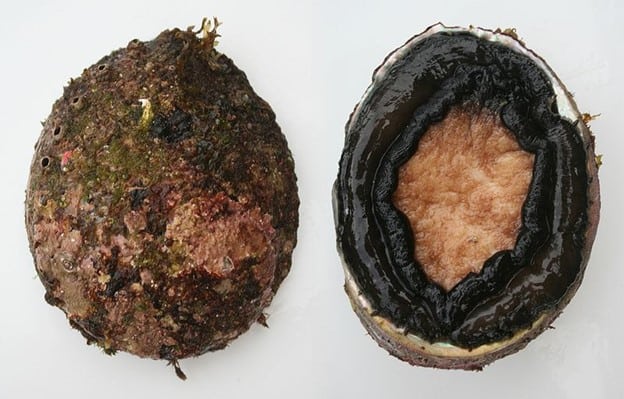 The brown-lipped abalone is a mollusk in the clam and mussel family, affectionally called “ear shell” because of how it looks like a meaty human ear on your plate. Lovely.

The shell is vibrant and blue, where the little mollusk blends in on the rocky outcroppings of the Pacific Ocean where it borders Great Britain, Mexico, and some parts of the U.S. coastline. The shell hides among the algae, hoping clever birds (and fishermen) don’t spot it.

A kilogram of brown-lipped abalones can cost as much as $500, which would be about $227 per pound. The problem is that most of the weight of the catch is the shell. When you look at the amount of actual meat per pound, which is about 250g per kilo of abalones, the cost skyrockets to over $900/pound.

The brown-lipped abalone has been so popularly eaten for so long that it nears extinction, raising its value further. Many countries impose a capture limit for fishermen on these delicacies of around 20 shells per day. 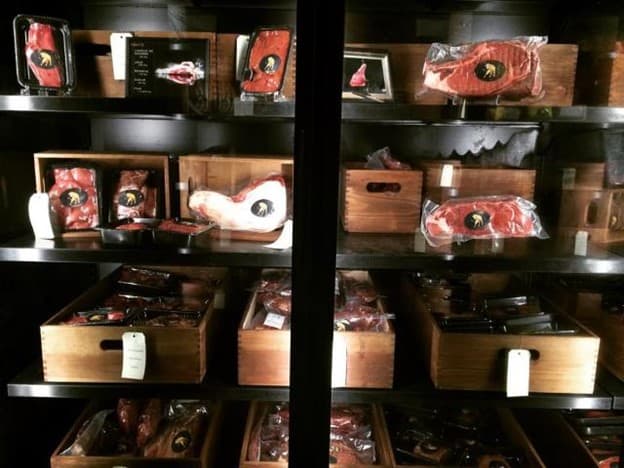 One-upping the Japanese in cow-raising and steak-tasting, the Polmard Eleveur Boucherie takes steak to a whole new level. In Paris, France, Alexandre Polmard builds on his family’s six-generation legacy of raising incredible beef to bring us this rib steak. His meat sells for $3,200 per kilo or $1,454 per pound after being aged for 15 years.

Few restaurants anywhere can sell this expensive meat. However, the Polmard rib steak goes for $4,000 or about $2,000 per pound at the Caprice restaurant in Hong Kong, making it one of the most expensive steaks ever sold.

The Blonde d’Aquitaine cattle on the Polmard family farm’s free-range property in Saint-Mihiel, in France, are carefully controlled. To retain flavor and texture, the cows are kept stress-free in life. After butchering, the beef is laid to rest in a 45-degree lab, with 47 mph air blowing on it at all times. 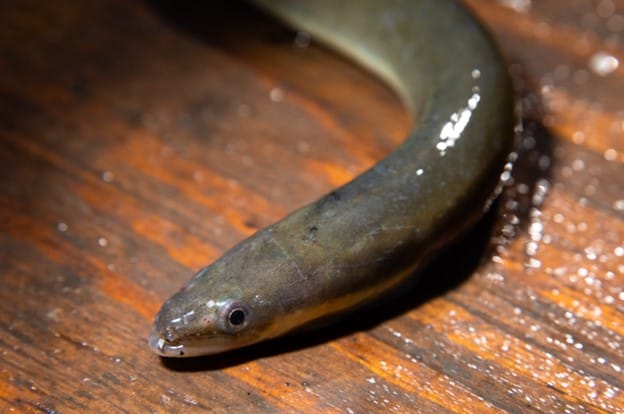 American baby eels fished off the coast of Maine are some of the most expensive per pound ever sold. We already know that Maine lobsters are a big deal, but who’d have thought that little eels, also called “elvers,” would be so profitable. Asian companies proficient in aquaculture and animal farming buy them from fishermen to raise and then put them for sale on the huge eel market in the Japanese restaurant industry.

Around 400 fishermen are licensed to fish for elvers, some of which pull in over $300,000 due to the rise in prices of baby eels around the world. It is legal to harvest them, but poachers and illegal elver sellers are raising concern for the industry as prices have surpassed $2,000 per pound for the little guys.

Eel or unagi is a huge part of Japanese food culture, which is why companies pay top dollar for the amazing animals. Eels are catadromous, a fancy word meaning that they are born in the saltwater of the ocean but then move to freshwater. This makes them hard to find in the wild and even harder to raise. 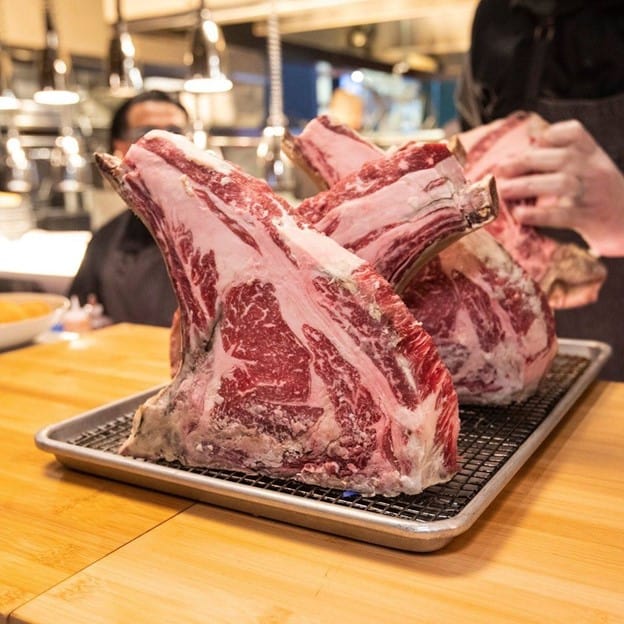 To be fair, the meat is a meal at a restaurant so you’re also paying for preparation, which includes cooking the meat over Japanese charcoal and almond wood and serving it in a bordelaise sauce with black truffles and sides.

The restaurant suggests that a serving of steak is 3 oz., meaning this meal can theoretically serve 20 guests. It was served to Wally’s President, Christian Navarro, who ate with Daymond John of Shark Tank, Rob Rosania, Michael Stern, and others.

Japanese charcoal is also referred to as white charcoal or Binchōtan. It has been used in Japan since the Edo period, which spanned from the 1600s to the mid-1800s. The charcoal is made from oak and is known by chefs around the world for its quality.

The most expensive meats ever sold throughout the world are rare in the wild and even rarer on the table. They are sought after by chefs and connoisseurs for their amazing flavor as well as for the pure sport of eating some of the rarest food that money can buy. You may have to travel to a premier foreign restaurant to partake, but consider the possibilities when you read this list, of tasting an all-dark chicken, a clam shaped like an ear, or the most delicious steak on earth.

10 Most Expensive Cognacs You Can Buy