Doberman Pinschers belong to a proud breed. If dogs were a chessboard, the Doberman would be the knight. They are known for their loyalty, protection instincts, and muscular stature. They stand up to 28 inches at the shoulder, have sleek bodies, and shiny coats.

This raises the question of what makes a Doberman’s color rare. Which knights are in the running to become princes in the big picture of this noble breed? Forget the black and brown standard coloration. These are the rarest of the rare when it comes to Doberman colors. 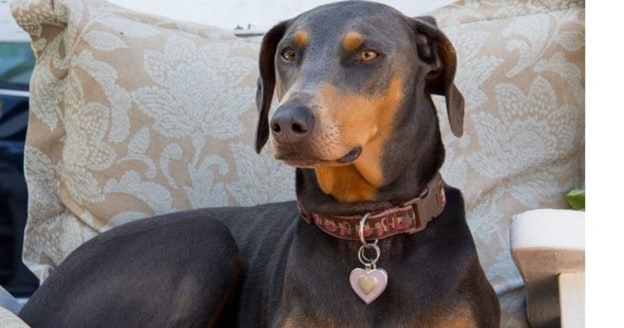 Blue and Rust Dobermans have a gray coat, which is termed “blue” as it can appear silver or blue in certain light. This sought-after Doberman color is the result of the recessive gene that causes dilution, meaning that genetically speaking they have a standard black coat that has been diluted or washed out into the slate grey pigmentation of the Blue Doberman.

Their paw points and facial markings are rust-colored, making them not quite a pure Blue Doberman (see below). A puppy from a reputable breeder may cost around $1,500. 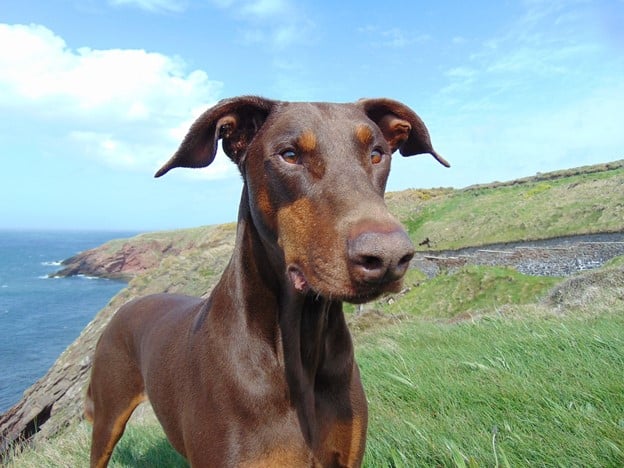 This drives the rarity of this particular breed, which has its own personality quirks. Red Dobermans are supposedly less territorial and more playful than black ones, though no one has conducted conclusive studies on this.

All Dobermans suffer from increased instances of skin allergies – it’s just a curse of their breed! Unfortunately, Red Dobermans are more prone to them. Red Doberman puppies need skincare to prevent acne and patching. 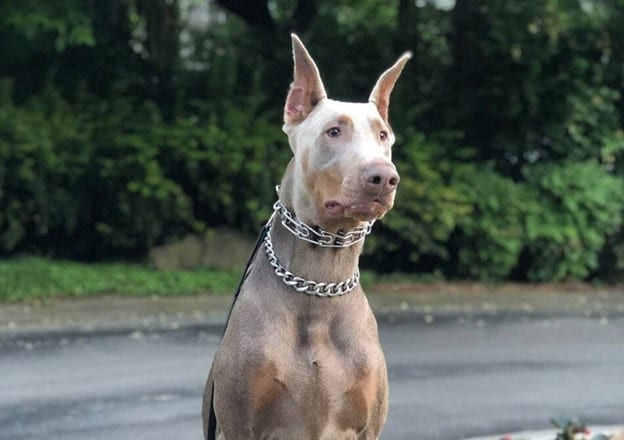 Fawn and Rust Dobermans are born from recessive genes that dilute the normal Doberman color palette. This means that they are not the result of inbreeding genetic mutations. This makes them healthier than other breeds on this list as well as recognized as a legitimate breed by the American Kennel Club.

Fawn Dobermans have the genes to be a Red Doberman, but also the dilute gene. As a result, their coat is light brown, almost lilac, with their muzzle and rust points showing as slightly darker brown. These breeds strike a great mix between being desirable and rare as well as healthy since, as you’ll see, the rarer these dogs get, the more prone they are to health issues.

The color of the Fawn and Rust Doberman can be nearly uniform, but a Pure Fawn would be easy to spot in comparison because of how light and shimmery its coat would appear in the light. Fawn and Rust breeds by contrast do have rusty color points at the usual spots, including a muzzle that is a darker brown than the surrounding coat, giving them an almost comical appearance, like a Fawn Dobie stuck its face in chocolate.

The coloring has led Fawn and Rust Dobermans to sometimes be mistaken for Danes. 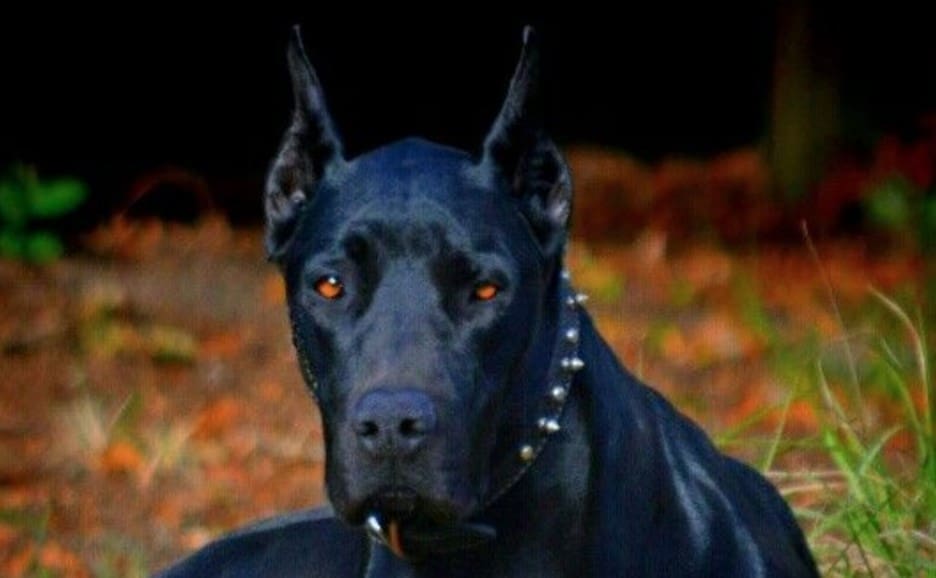 Pure Black Dobermans are weird to see, having the normal shiny black coat of a conventional Doberman but with zero color points on the brow, paws, head, or ears. True black Dobermans can only be bred from a mutation occurring between K-dominant black genes.

Like the White Dobermans (see below), Pure Black breeds are known for health issues, probably due to the inbreeding people have used to try and create Pure Black litters. Due to the potential for health complications, Pure Black Dobermans are not recognized by official dog classification organizations.

One of the reasons Pure Black Dobermans are considered dangerous to breed is that they are more likely than any other to be hit by cars. If you have a Pure Black, make sure to buy a flashing collar that you can put on them at night. 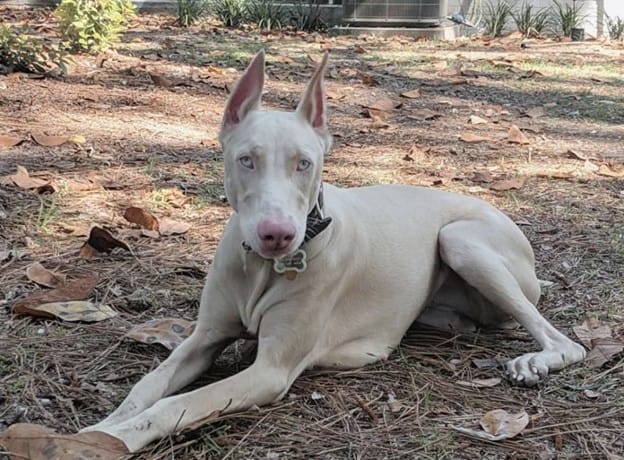 White Dobermans are instantly recognizable as being rare. They are white or cream-colored with blue eyes. The only way to get a pure white is through inbreeding, which is why White Dobermans are not considered ethical to breed on purpose. Unfortunately, this just contributes to their rarity and, therefore, their desirability.

Due to their sparse genetic lineage, White Dobermans are known for health and behavior issues, including poor eyesight and anxiety. They are not recognized by the American Kennel Club.

White Dobermans should not be confused with Albino Dobermans, which we discuss later. White Dobermans, also called Cream or Partial Albinos, have white coats but they also have blue eyes like a normal Doberman. They also may suffer from health conditions, though not nearly to the degree that true Albinos do. 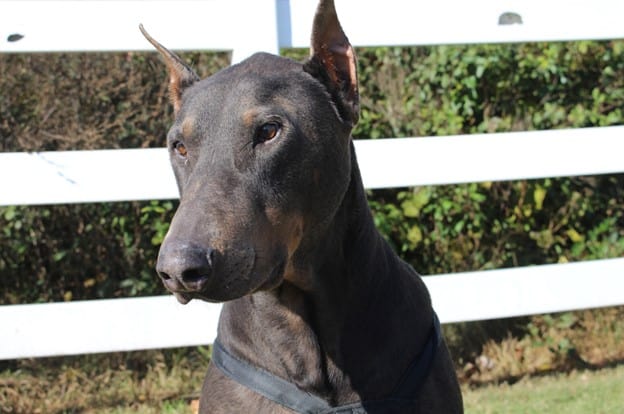 Pure Blue Dobermans have the same muted silver/gray coloring as the Blue and Rust breeds but even more completely. Like those, they are the result of gene dilution, rather than mutation. The shiny coats of these dogs make them highly desirable. Typically, the fewer rust points on the brow and legs, the “purer” they are, making them even more valuable.

Blue Doberman pups sit on the high end of normal pricing and set back potential hours $2,000, at least. 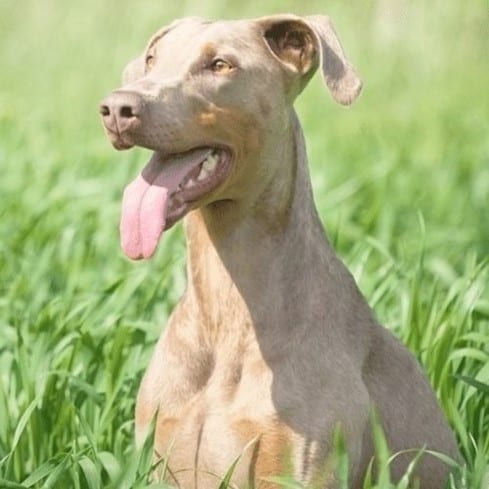 Pure Fawn Dobermans are known for their exotic look, which is a shiny, almost pure brown coat, which looks lilac in sunlight. Their tan rust points are harder to see than on the Fawn and Rust breed.

Solid Fawn Dobermans have many associated health risks due to the inbreeding required to create them. This is even worse than the Pure Blues due to how comparatively difficult Fawns are to breed successfully. Many sellers attempt to pass off their diluted genes as an exotic rarity rather than a result of breeding.

Some consider the Fawn, also called the Isabella Doberman, to be the rarest breed. Fawn Dobermans are known for developing color dilution alopecia, which can cause them to go hairless at young ages. Therefore, fully grown Fawn Dobermans with all their fur are even rarer. 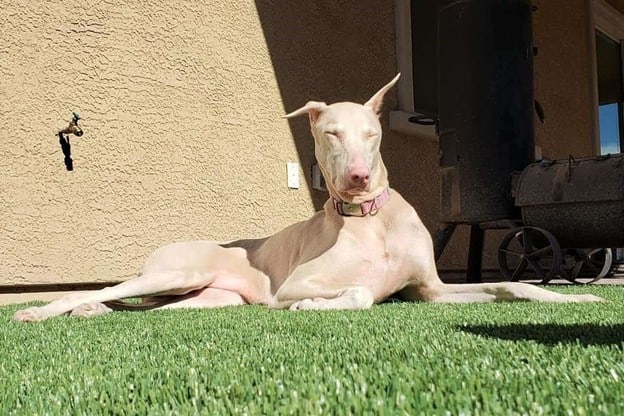 The rarest Doberman color is the Albino Doberman. Albino Dobermans have a white coat just as the Cream or White Dobermans do. However, by their markings and especially by their eye color, you can tell if they are a true Albino, which is a result of genetic abnormalities, not simply of breeding. Albinos have pink, or colorless eyes, contrasting with the bright blue eyes of a White Doberman.

An Albino will not have shades of cream or off-white in its coat. Instead, it will be completely white and tinted pink. It won’t have any markings but any exposed skin such as on its nose or ears will be bright pink. They experience not only skin and eyesight problems but also lack certain neural receptors, which leads to unpredictable behavior problems and lower intelligence.

Albino Dobermans have only been seen since 1976. Sheba, the first known Albino Doberman, is thought to be the source of subsequent inbreeding that created this rare color. This origin also explains their many health problems, which continue to be passed down, worsened by inbreeding.

The rarest Doberman colors are often the result of inbreeding genetic mutations, leading to a myriad of health issues in the offspring. This has led canine classification groups to deny these breeds an official designation. Unfortunately, this has made them even rarer and more desirable.

Regardless of the ethics involved, all these dogs are beautiful in their own way. While the normal Dobies are certainly the healthiest and cheapest, some of these pure coat colors are absolutely stunning, and draw stares from collectors eager to obtain a more idiosyncratic pet.