Ball python morphs are gorgeous animals, bred by using rare genes and manipulated breeding methods to create specific results in their colors and patterns. Those results are visually glorious, giving ball pythons more pedigree for collectors than ever before. 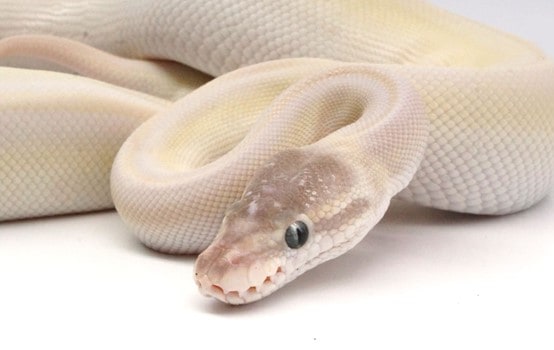 Leucism is a word that indicates scales that lack pigments, resulting in a clear white color across the entire snake. The defining trait of this python must be its blue eyes, even though off-brand leucistic snakes can also acquire this trait on accident.

These pythons are rare due to difficulty breeding them. Up to five generations of snakes can go by without getting a true blue-eyed leucistic python. Some breeders think it’s practically random, easily less than a 25% success rate. 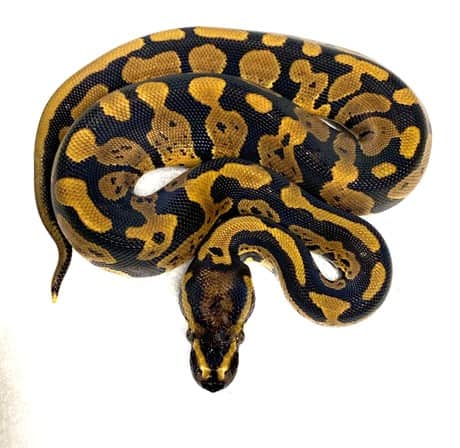 Acid ball pythons were first bred in 2014 by a breeder named Josh Jensen, who isolated the gene. This morph is yellowish and covered in golden blotches. The background color is dark brown to black like a normal ball python.

These snakes can cost at least $1,500, especially if they have more creative color patterns that favor the yellow over the brown.

The recent acid morph is based on a dominant allele that overrides other morphs, making them easier to breed. Even ivory genes, notoriously dominant, fade to the background of the acid morph. 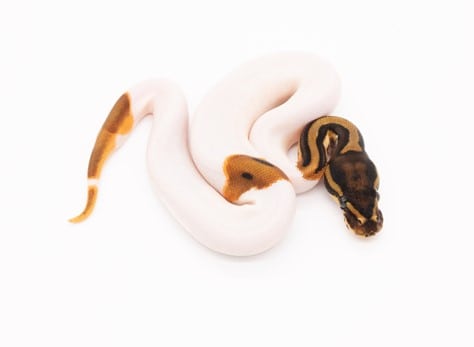 The piebald ball python morph has been around since 1997. This is partly why it’s not the most expensive on this list.

The basic coloring is the normal black and brown of regular ball pythons but with huge white segments erased from the pattern. In fact, the more baldness the snake has mixed in, the more expensive the python. You can get a little baldness for just a few hundred dollars, but that turns into several thousand for the rarer, balder piebalds.

Ball pythons are native to West Africa. References of naturally occurring piebald morphs date as far back as 1966 in Ghana, where a large one was killed after causing a commotion due to its strange pigmentation. It wasn’t until snake keeping became popular in the states in the 90s that anyone isolated the gene. 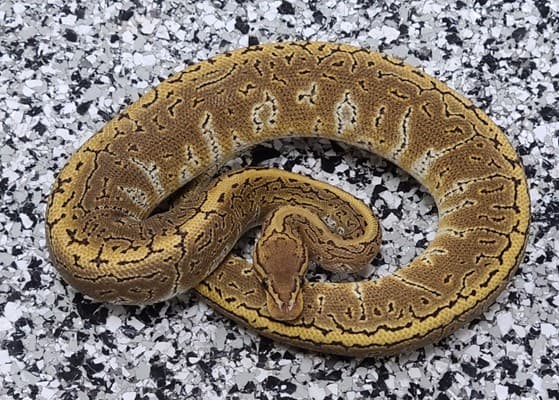 The gene mutation used to create monsoon ball pythons actually occurred naturally. In a random happenstance, a python was born in 2015 that received two recessive monsoon genes, which made its breeder, Dave Green Reptiles, realize how special it was.

Monsoon ball pythons have normal brown and tan coloring. It’s the pattern that makes them so amazing, which is a series of intricate streaks and speckles all over their bodies. There’s nothing quite like a monsoon ball python morph, named for how its pattern looks like rain moving over a window.

A $2,000 price tag tells you how coveted this pattern is. Even breeding stock for monsoon pythons (they carry the gene even though they don’t have the pattern) can cost thousands.

Despite being naturally the same coloring as a normal ball python, monsoon morphs can be bred with various color morphs to create even more combinations. These polymorphic monsoon morphs will set you back even more than the normal ones. 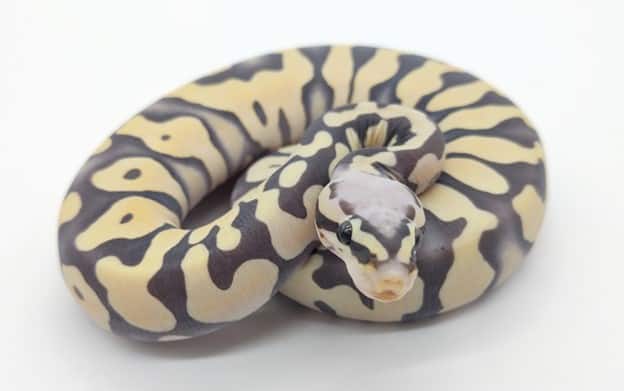 The scaleless ball python morph doesn’t affect the color or pattern of the python, meaning these snakes look normal in that sense. However, one look will make you realize that rather than the rigid scales and scutes that normally plaster a ball python’s body with shiny armor, these pythons have zero scales anywhere, except for subtle ones that cover their eyes.

They have smooth, shiny skin and move like any python. However, the lack of scales makes them vulnerable. They can injure themselves easily if not properly taken care of. Initially, breeders were offering over $100,000 for scaleless hatchlings. However, the gene is now more readily available. Collectors can nab one for about $2,000 in 2021.

To try and recapture the rarity of those original scaleless pythons, many breeders today try to add in colors and patterns that make their scaleless hatchlings unique. Some of these sell for over $10,000, but there isn’t one specific morph to keep track of. 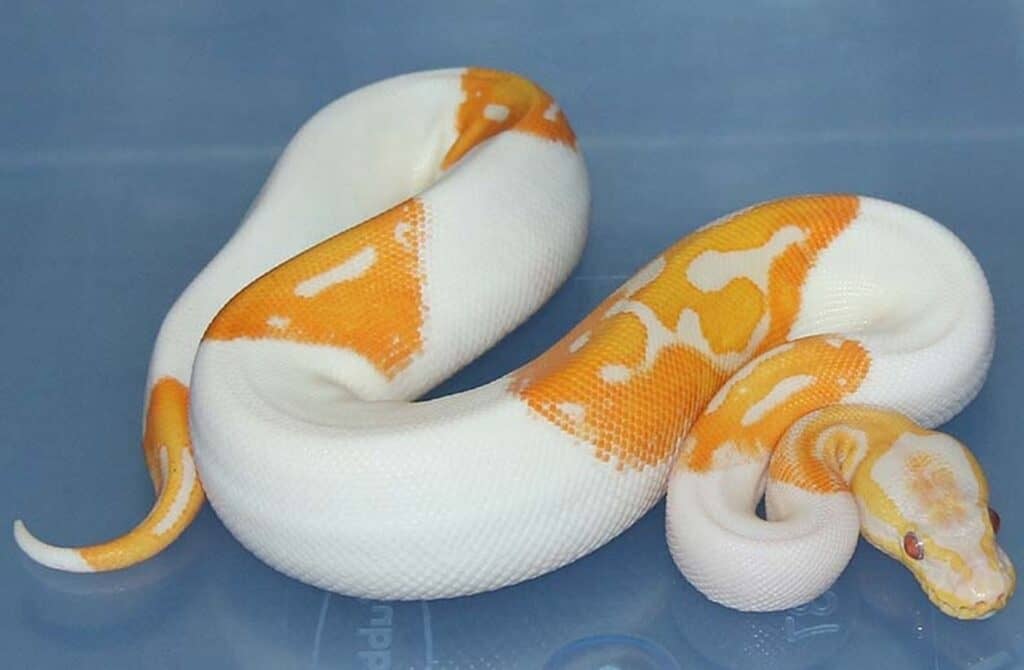 The dreamsicle ball python is one of the oldest morphs on this list, having been bred since 2007, first by Ralph Davis Reptiles. It used to be a lot more expensive, but it’s been on the market a while. A well-bred dreamsicle can cost as much as $2,500.

Dreamsicle pythons are also known as lavender albino piebalds since the dreamsicle morph is a mix of piebald and lavender albino genes. These genes produce large white patches all over the snake’s body, which almost look like the snake’s natural colors have been scrubbed off a background of bright orange.

The albino genes in this morph give true dreamsicle ball pythons their pale, almost translucent skin, as well as bright red eyes. If they have normal-looking eyes, they may not be a true dreamsicle. 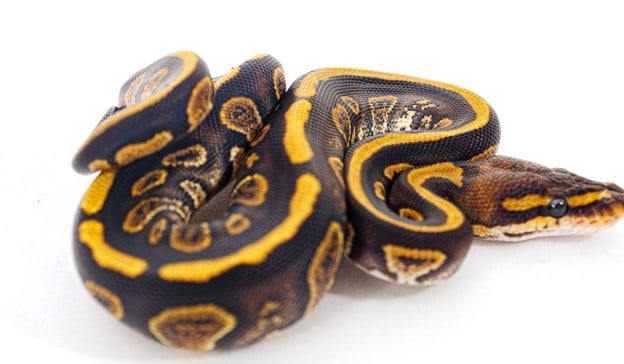 All the way from the Netherlands, the stranger ball python gene happened on accident when a clown and butter pastel mated and created this interesting new morph.

Since 2016, stranger ball pythons have been all the news with collectors. They have a shiny black coloring speckled with brown dots on the side. Their spine is colored with a tan stripe that gives them an instantly recognizable display when viewed from above. These pythons cost about $6,000 in 2021. However, since the breeders are mostly overseas, U.S. buyers should expect significant handling fees.

Stranger ball pythons can also present with other morphs, making some variants significantly more expensive, even $15,000 or more.

It’s often difficult to prove that a morph is genetic without extensive experimentation. To prove that it can be isolated and sold, and not just random, IRES Reptiles experimented for 4 years to figure out. So even though the first stranger ball morph technically hatched in 2012, they’ve only been sold and distributed since 2016. 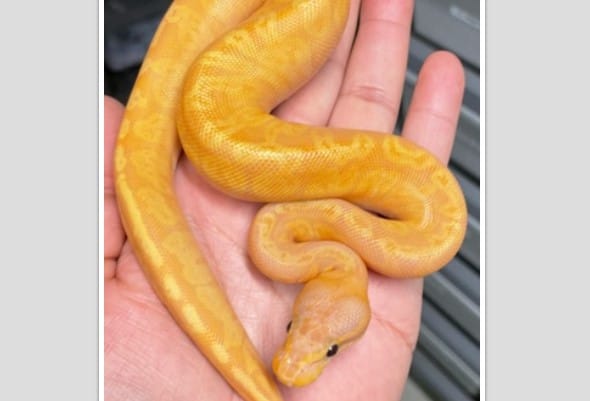 The Michigan-based breeder BHB Reptiles created the Sunset Ball Python gene, as well as several others on this list. These aren’t your normal-looking ball pythons! As you can see, they’re masked in vibrant orange and ochre color like a living, wiggling sunset. The red on their spine transforms into yellow and orange on the fringes like a cross-section of the sky.

The basic sunset ball python costs around $4,000. However, the most vibrant, exciting, and well-bred of its breed can fetch upwards of $10,000 depending on how they look.

Sunset morphs favor being combined with pattern morphs like clown and spider. These create what’s called a “polymorphic python.” These are even more valuable than the regular sunset ball morphs. 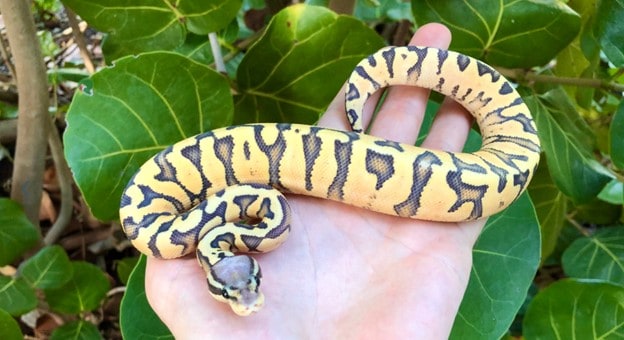 The rarest ball python morph is the pastel zebra morph. The gene was first discovered in 2005 but not cultivated for successful breeding until 2015 by Roussis Reptiles. These amazing animals can be combined with recessive morphs like ghost and clow. In any form, a true pastel zebra python morph will set you back $15,000 or more.

Pastel zebra morphs get more vibrant with every shed. As they age, they gain more pixilation and darker scale patterns, which better emphasize their amazing colors.

Ball python morphs come in many colors and patterns that make them stand out from the conventional gene pool. They’ve been bred to look luxurious and unique, and they can fetch their breeders thousands, even tens of thousands of dollars with the right lineage. Unfortunately, the longer a morph has been on the market, the less valuable it becomes. Staying on top of the value standards of ball python morphs requires updating your lists, practically by the year. But you can use this one for now.

15 Rarest LOL Surprise Dolls – Is yours a collectible?