15 Rarest LOL Surprise Dolls – Is yours a collectible?

In 2016, toy company MGA Entertainment released L.O.L. Surprise! and it quickly became one of the best selling toys in the United States. As the name of the toy line implies, L.O.L. Surprise! concept is modeled after the very popular blind bag figures craze that started in Japan. Due to the nature of blind bags, certain L.O.L. Surprise dolls are rarer than other. Every series features at least one Ultra-Rare doll that has a low production numbers. Although the L.O.L. Surprise line is over five years old, collecting the dolls is still a pretty popular hobby. The rarest dolls are listed on eBay for double or even quadruple the original retail price. 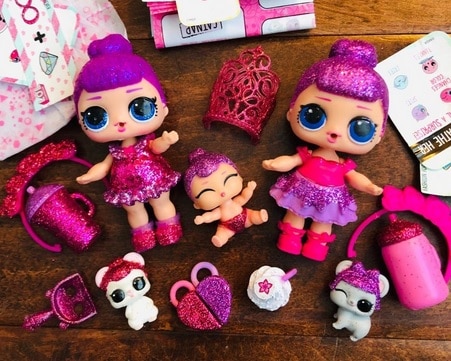 Sugar Queen was the first Christmas doll that L.O.L. Surprise ever released. She is based on the Sugarplum Fairy from the classic Christmas ballet, The Nutcracker. Sugar Queen wears a glittery tutu and even has ballet shoes. She has two pets, Sugar Sneak and Sugar Squeak.
Club: The Glitterati
Character Number: 002
Series: Big Surprise
Official Rarity: Ultra-Rare 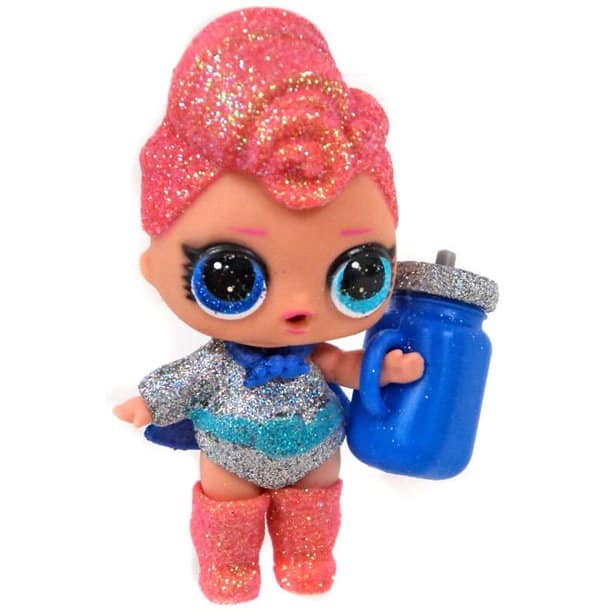 Stardust Queen is another Ultra-Rare Big Surprise doll. She is based on David Bowie and her outfit is similar to the one Bowie wore while performing “Ziggy Stardust.” Stardust Queen has different colored eyes, as a nod to the misconception that David Bowie had heterochromia. Bowie actually had anisocoria, which makes one pupil larger than the other. 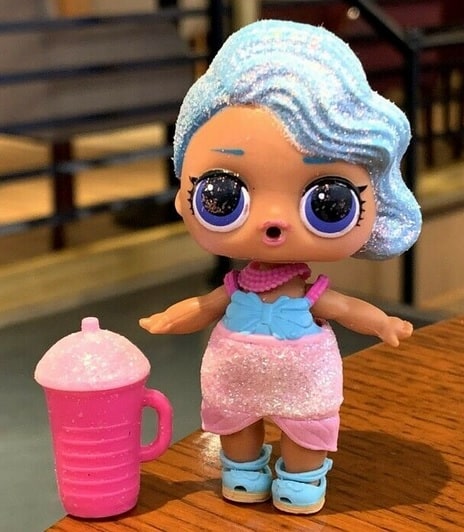 Splash Queen is a mermaid-themed Ultra-Rare L.O.L. Surprise doll from Series 2. She has glittery blue hair and wears a dress that has shells on top and a mermaid tail pattern on the bottom. Splash Queen was later re-released as part of the Bling Series. 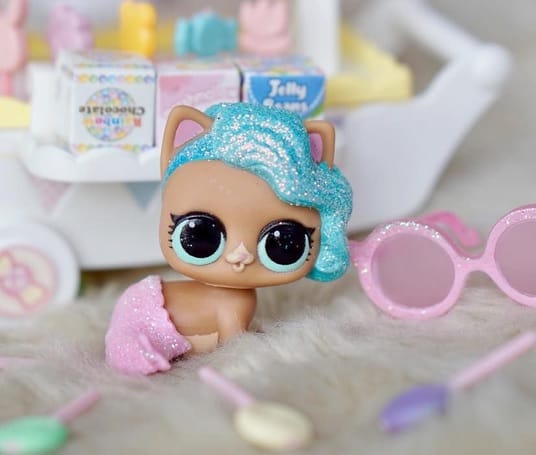 Splash Meow-Maid is an Ultra-Rare L.O.L. Surprise Pet and belongs to Splash Queen, who is also on this list. She is a little tan cat, with a mermaid hair, and blue glittery hair that matches Splash Queen’s. 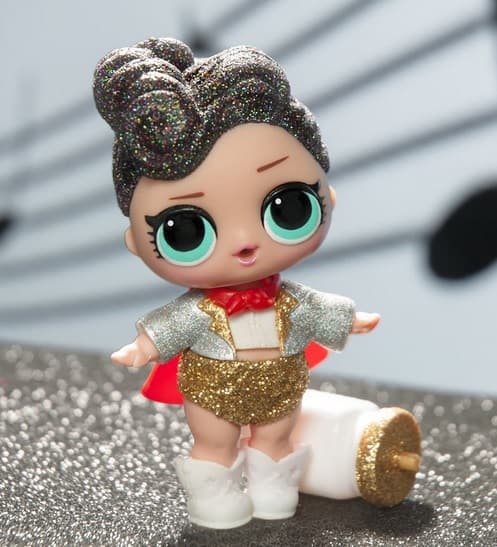 The Queen was released in Series 2 as a Rare L.O.L. Surprise doll. Her outfit, name, and design were inspired by Elvis Presley, who was known as “The King.” The Queen was later re-released as the other Ultra-Rare doll, along with Kitty Queen, in the Glam Glitter Series. Jukebox B.B. is The Queen’s older sister and part of the OMG Fashion Dolls Series. 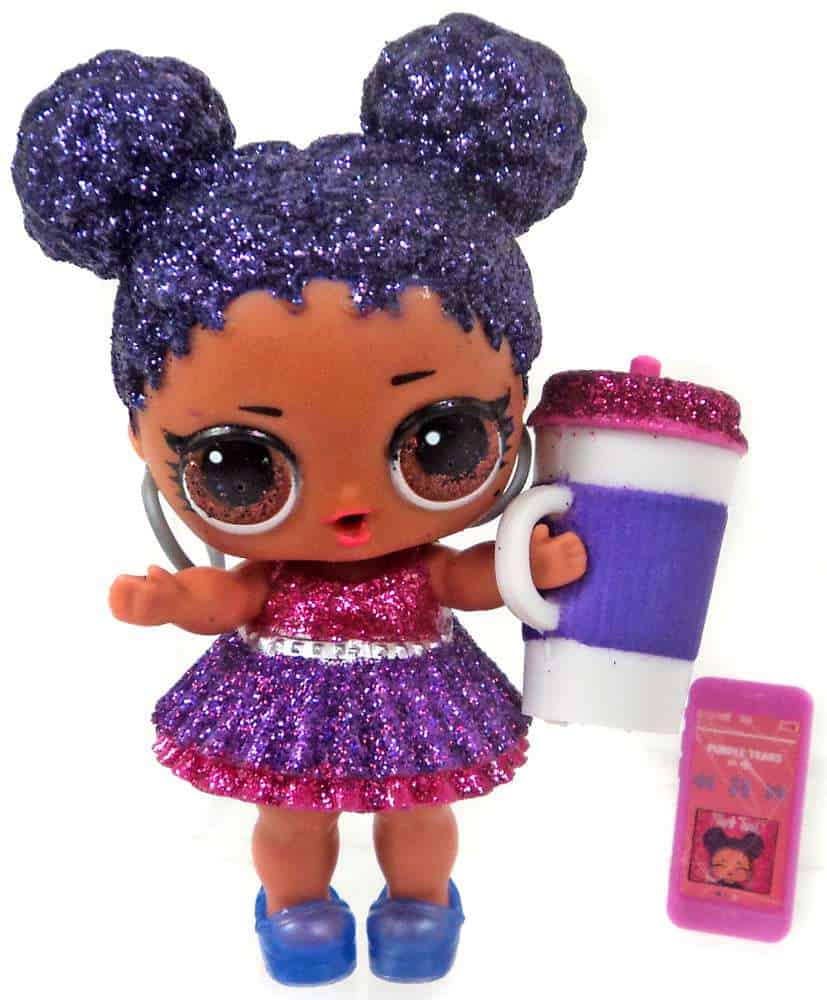 Purple Queen is an Ultra-Rare doll released LOL Big Surprise Series. The Big Surprise balls were special event items that came in a large ball with 50+ surprises, including exclusive dolls, clothing and accessories, and charms. Purple Queen’s design is an homage to the late singer Prince and his song “Purple Rain.” 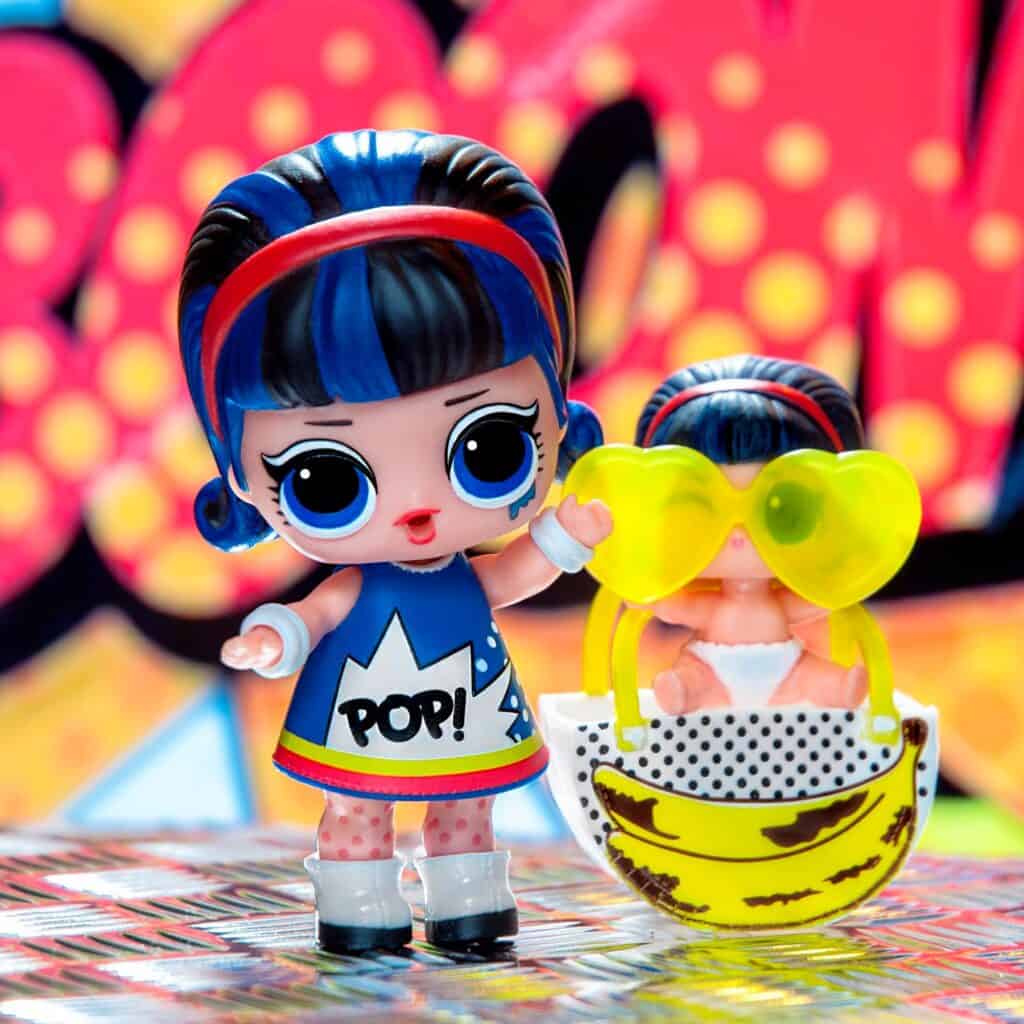 Pop Heart is another Ultra-Rare color-changing L.O.L. Surprise doll. Her style and her name draws inspiration from the Pop Art movement. Pop Heart’s dress even features a speech bubble with the word POP! Removing Pop Heart’s dress reveals a swimsuit that changes colors. Her hair also goes from black and blue to red and white. 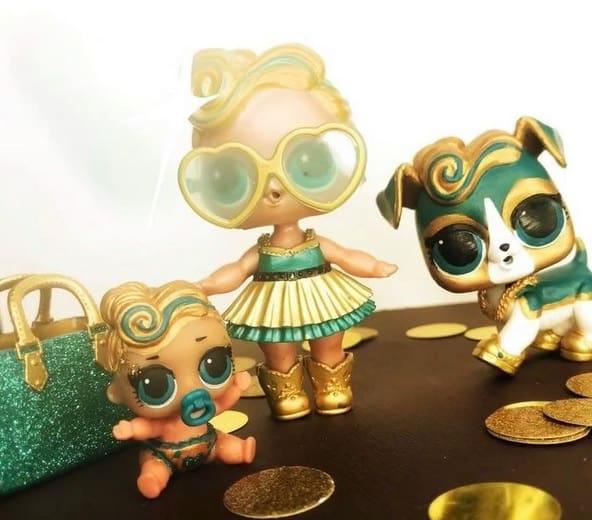 Luxe is the Ultra-Rare doll from the 24K Club, which came out during Series 2. As part of the 24K Glub, Luxe has a special metallic shine to all of paint on the doll. Because she was a limited Ultra-Rare, Luxe goes for quite a bit on eBay, beginning at about $40 for just Luxe and as high as $150 for the whole Luxe family set. 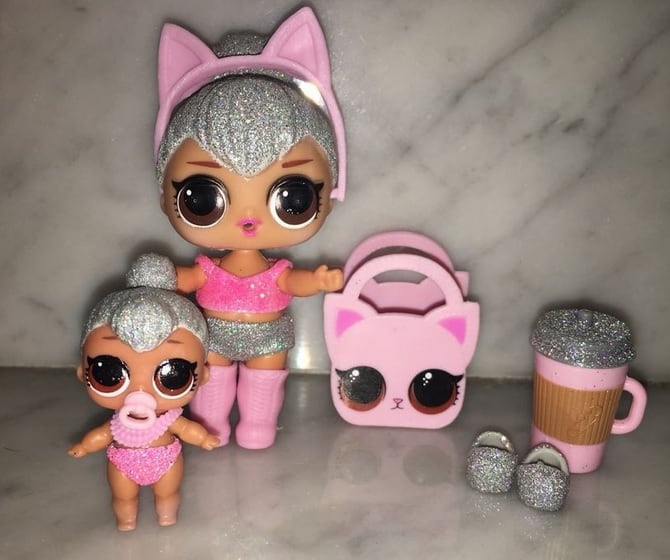 Kitty Queen was a Rare Series 2 L.O.L. Surprise doll and she was an Ultra-Rare during the Glam Glitter Series. Some L.O.L. fans think that Kitty Queen may be loosely based on Ariana Grande as the doll has a cat ear headband, a high ponytail, and wears outfits similar to the pop star. Kitty Queen is so popular that she also got a Big B.B. Surprise release. She also has a big sister, Kitty K, that is part of the OMG Fashion Dolls Series.

Kitty Queen is the second cat-themed L.O.L. Surprise doll ever released, with the first being Baby Cat, which features whiskers. 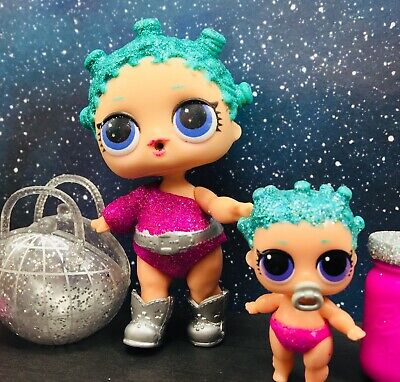 Besides Queen Bee, Cosmic Queen is one of the most popular Rare/Ultra-Rare L.O.L. Surprise dolls. She was also released in Series 1 and again in the Glitter Series as an Ultra-Rare. Cosmic Queen has fun teal colored hair, purple lipstick, and she wears a glittery purple jumpsuit.

The heart-shaped sunglasses that Cosmic Queen wore in Series 1 were later reused for Neon Q.T. in the JK Mini Fashion Doll line. 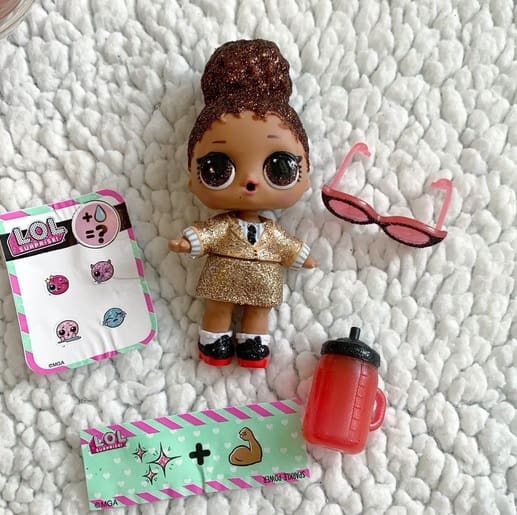 Boss Queen made her debut with Series 3 as a Rare L.O.L. Surprise Doll. As her name implies, Boss Queen is dressed like she works in an office and has black round glasses. She has an older sister, named Da Boss, which is part of the OMG Fashion Dolls Series. Boss Queen was re-released as Ultra-Rare in  the Sparkle Series. 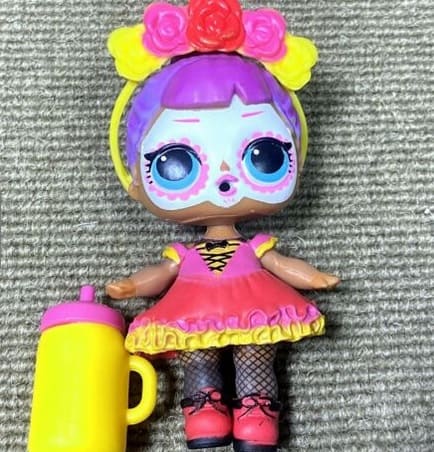 Bebé Bonita is painted like a Sugar Skull, which is part of the Mexican holiday, the Day of the Dead (Día de los Muertos). She was released as part of the Eye Spy Series and has color changing features. While many fans missed their chance to snag the original Bebé Bonita, in 2020, a Spooky Sparkle Limited Edition version of the doll was released and is still for sale on Amazon at this time at a marked up price of $22. The Spooky Sparkle Bebé Bonita glows in the dark and she probably won’t be around for much longer. 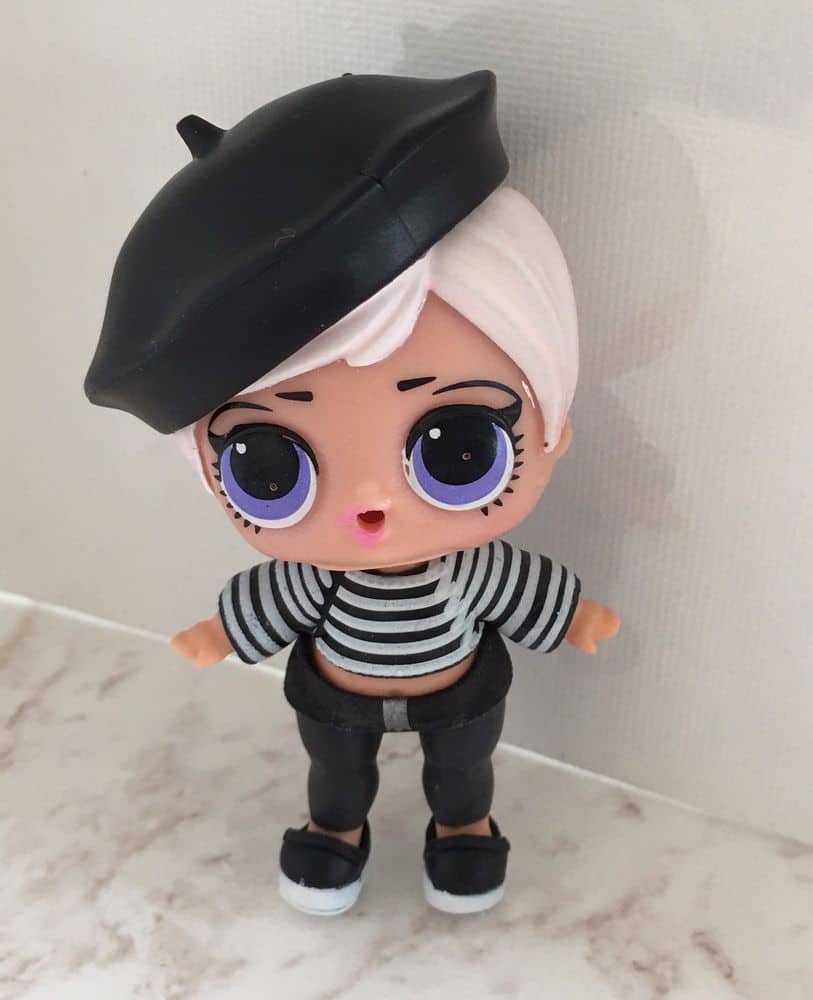 Beatnik Babe, whose style and name is a direct reference to 60s Beatnik fashion, is one of the few Ultra-Rare L.O.L. Surprise dolls that isn’t part of the Glitterati Club. She is part of the Retro Club and came out with Series 3. Another thing that makes Beatnik Babe a desirable L.O.L. Surprise doll is that she has color changing features. When heat is applied (with hot water, etc.), the black parts of Beatnik Babe’s clothes turn teal and purple. If cold water is used, her white hair turns red and she gets red eyeshadow, a red top, and red bracelets. 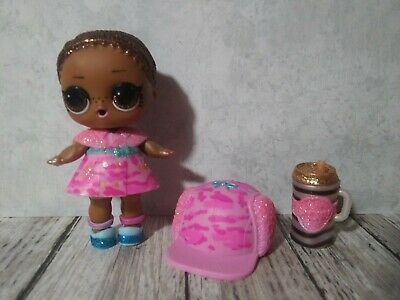 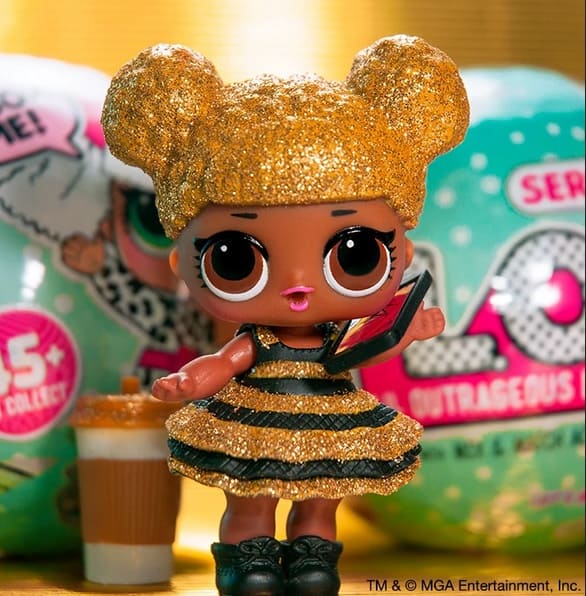 Queen Bee’s design was inspired by Beyonce and the doll’s Glitter Series outfit looks like the one Beyonce wore in her “Single Ladies” music video.