8 Rarest Rolex Watches Ever Made

Rolex has been dominating the market of luxury watches for more than a century now. In 1905, Hans Wilsdorf and Alfred Davis launched the company in the UK with an aim to produce high-quality timepieces at an affordable price.

When the company was launched, wristwatches were referred to as wristlets and were looked down upon. Wilsdorf made it his mission to popularize wristwatches as he firmly believed in the immense potential of wristwatches. It is needless to say that Wilsdorf was not only successful in this, but he and his company thrived.

The company has a long, colorful, and rich history. Over the years, Rolex introduced many new technologies and designed and became synonymous with luxury watches.

Like any other luxury brand, Rolex too produced some exclusive limited-edition models that became collector’s items and sold for thousands of dollars in auctions.

Here we gathered a list of 8 rarest Rolex watches that still exist. 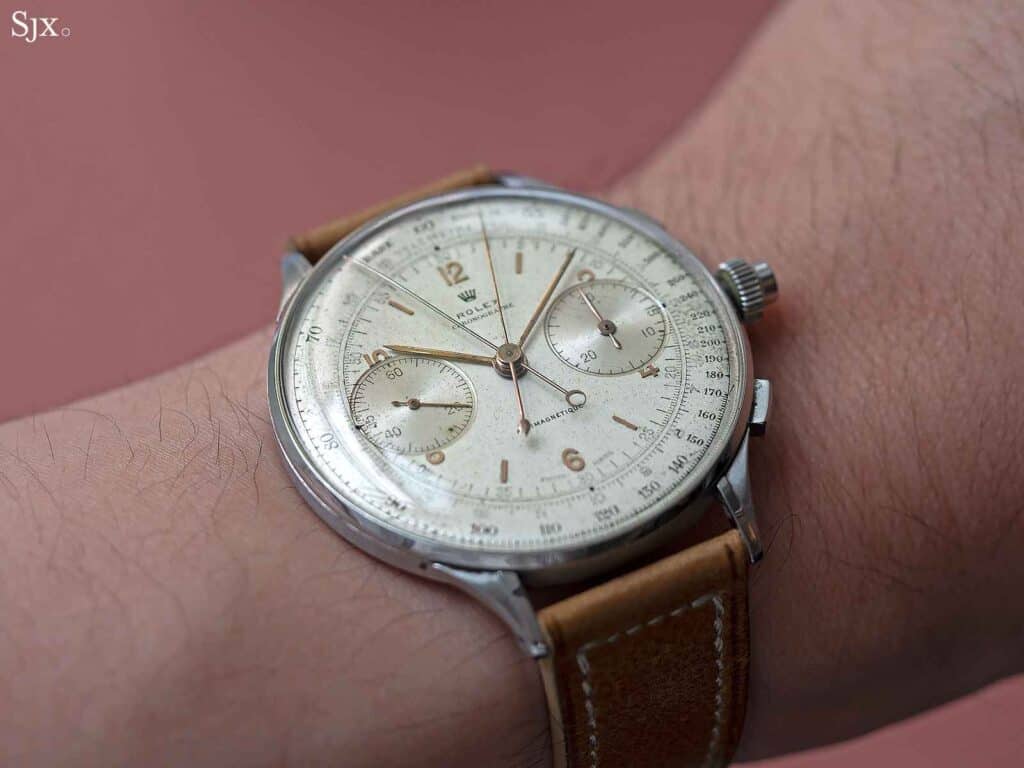 Split-Seconds Chronograph is considered the holy grail of Rolex watches. The watch was produced in 1942 but was never offered for sale.

Only 12 examples of this ultra-rare watch were produced, of which only nine are accounted for. The watches were given out to the race-car drivers associated with Rolex at that time.

It has a huge dial (44mm diameter) featuring easy to read telemeter and tachymeter scale. Three buttons are located on the right side of the stainless-steel dial case.

The hour markers are relatively shorter, which makes the watch even larger in appearance. The dial is silver-colored, and the case has a very thin and delicate bezel.

The 4113 first appeared in an auction in 1991 at Christie’s in Geneva. It was consigned by the window of Stefano La Motta, a racing team member who died in 1951 in a car crash.

Rolex was first launched as Wilsdorf and Davis, with its headquarter located at 83 Hatton Garden in London. 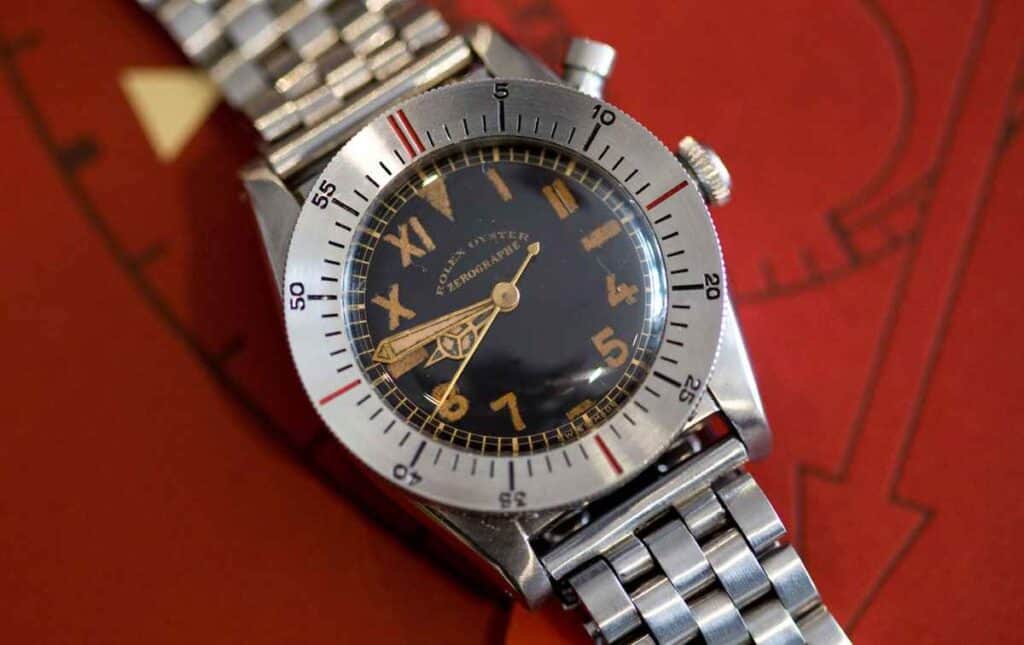 The official literature of Rolex doesn’t mention the Rolex Zerographe, reference 3346, probably because it was not a finalized design but more of a refined test concept.

Besides being rare, this model is significant for two other reasons. It is the first Rolex model with an in-house chronograph movement and a rotating bezel, the two features that define Rolex.

Rolex moved its operation from London to Geneva, Switzerland, in 1919 to avoid paying a high rate of post-war taxes. 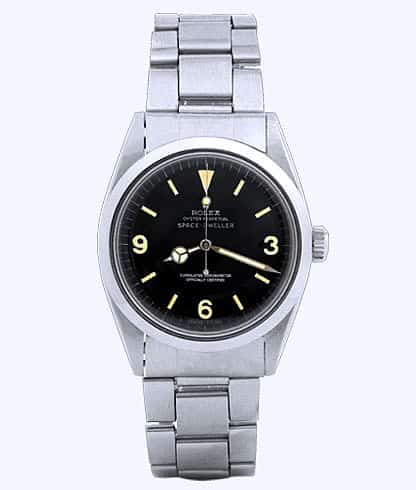 Rolex Space Dweller was a slightly modified version of Rolex Explorer reference 1016. The design and other specifications were identical to regular Explorer only the word Explorer inscribed on the dial was replaced with the word Space Dweller.

Rolex made the watch to commemorate the Mercury mission, the first spaceflight program of the United States. Only a dozen or less of this model were made for a trial run in Japan market.

It is not known why Rolex chose Japan and the US market for this product. When the astronauts participating in the program visited Japan, they received a warm welcome at every corner of the country.

Rolex probably wanted to cash in on this frenzy. However, the model never went into production and remained one of the rarest Rolex watches.

Since the 1930s, Rolex had been supplying Oyster Perpetuals to the participants of various expeditions to test the reliability of the watch. The company would improve and refine its models based on the feedback received from the explorers. After the successful ascent of Mount Everest by Tenzing Norgay and Sir Edmund Hillary, Rolex launched its Explorer model in 1953. 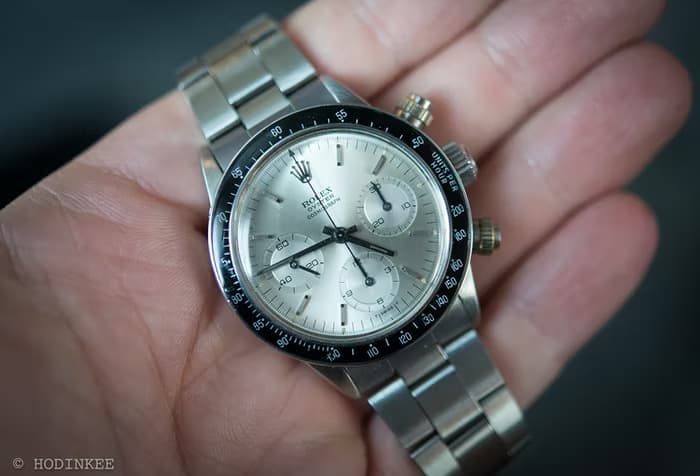 Albino Daytona Reference 6263 comes with stainless steel case and bracelet. It is powered by manually wound caliber 727, which is based on Valjoux Caliber 72.

This model is specifically rare because the subdials are silver, just like the rest of the dial, and not the usual black and white. It is the reason that the model is commonly called the ‘albino’.

However, it is not completely colorless. The hands for the chronograph function are blue, and the watch is framed by a black tachymeter bezel.

It is believed that only four examples of this model were ever made by Rolex, and two of them surfaced in an auction. 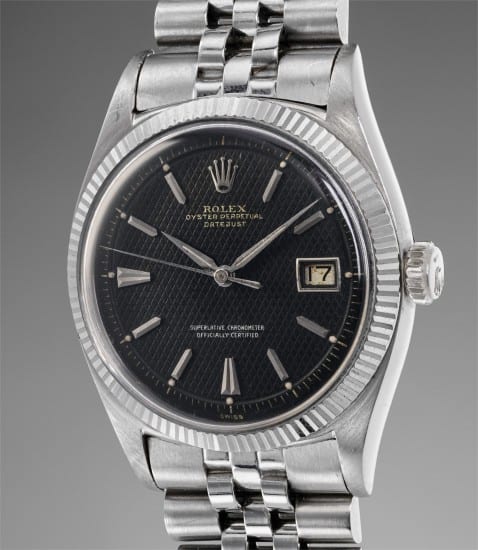 Rolex launched the Date model in 1945 to celebrate the company’s 40th anniversary. Over the year, Rolex brought out several Datejust models, and they never went out of the Rolex catalog.

However, only a handful of copies of reference 6605 were constructed from 18K white gold. The first example was discovered by a prominent family in Mexico City.

Later, another couple of examples of Rolex white gold Datejust appeared on the market. It is still unknown why it was produced in such a small number and why Rolex discontinued it, but it is undoubtedly one of the rarest Rolex models ever made.

All the Rolex watches are carefully crafted and assembled by hand. In this era where everything is mechanized, the company still believes the best things are handmade. 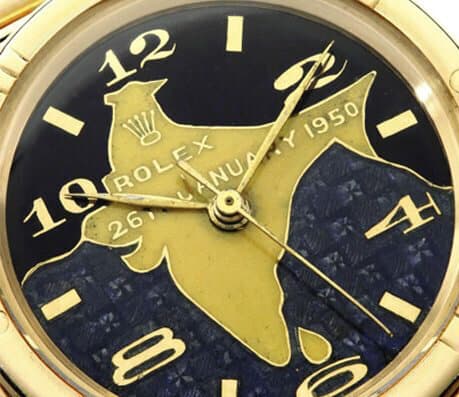 This special edition Rolex watch was made to celebrate the first Republic Day of India after its independence from the British. The watch is made with 18K rose gold and features an Indian map on its dial.

The date of the first Republic Day, 26 January 1950, is also inscribed on the dial.

A Bombay-based agent was commissioned to make two copies of this Rolex Oyster Perpetual, one belonged to the first President of India, Dr. Rajendra Prasad, and the other one was gifted to the first Indian Prime Minister Jawaharlal Nehru.

The copy of the watch that belonged to Dr. Rajendra Prasad was stolen from his former residence (now a museum), Sadaqat Ashram, in 1964. The watch reappeared in 2011 in an auction organized by the auction house Sotheby. However, the Indian government intervened and asked the auction house to reveal information on its provenance. Sotheby postponed the auction, and it never went under the hammer again. 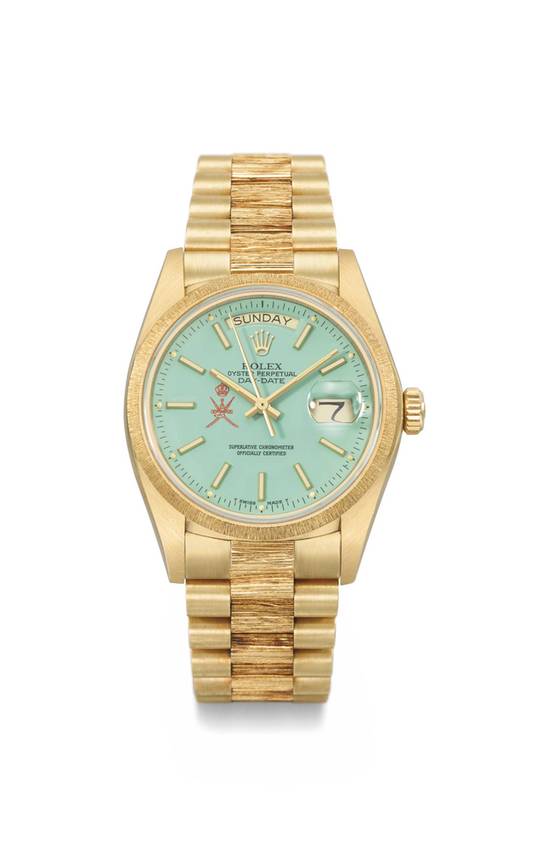 Qaboos bin Said, Sultan of Oman, was a connoisseur of luxury watches and had a great collection of rare timepieces. He would also frequently gift watches to his friends and aides.

The dials of these special-edition watches would feature the Omani royal crest. It is a khanjar dragger laid over crossed swords. The watches made especially for Oman Sultanate are commonly known as Qaboos.

All the Qaboos are considerably rare as all of them were made in small numbers, but the one made in 1980 beat them all in its uniqueness and rarity. This one has a light green lacquer or Stella dial, and the khanjar is situated at 9 o’clock instead of 6 o’clock, which was commonly the practice.

The case back of this watch also has a khanjar emblem engraved and red lacquered. Less than five examples of this reference have the emblem both on the dial and case back, and only one has the unique light green dial.

Rolex supplied multiple models of khanjar emblemed watches to the Oman Sultanate. They would send two types of dials, modified and unmodified. In the former, the brand would alter the design of the dial to make room for the khanjar emblem. Whereas some models were supplied as it is. Oman Sultanate would have them stamped by their own artisans. 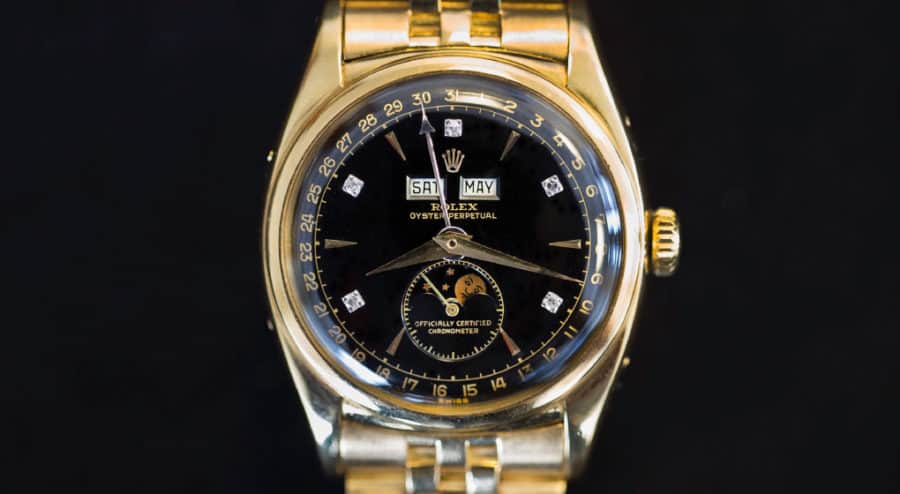 Rolex Bao Dai is the rarest Rolex watch on this list as only one example of this watch was ever made. It also held the record of the most expensive Rolex watch for a few years. This watch was specially made for the 13th and last emperor of Vietnam, Bao Dai Nguyễn Phúc Vĩnh Thụy.

In 1951, following the Indo-China war, world leaders met in Geneva to discuss the future of Vietnam.

During this visit, Bao Dai went to the store of Chronomètrie Philippe Beguin, a famed Rolex retailer, and requested them to show him an exclusive watch. He said he wanted the rarest and most precious Rolex ever made.

However, the one owned by Bao Dai had five diamonds set at even numbers. The dial layout is also unique for this particular piece.

Bao Dai was known as the man of taste. He owned some of the finest and rarest creations of his time, including cars, yachts, and villas.

8 Most Expensive Geodes Ever Sold

10 Most Expensive Candles You Can Buy