8 Most Expensive Geodes Ever Sold

A geode is formed within volcanic and sedimentary rocks. They are rounded, hollow stone formations whose minerals are deposited into spaces within the rock by water or hydrothermal fluids. The result, beyond all the science stuff about rocks, lava, gas, and eventually the solutions that make crystal formations possible, is a common but occasionally expensive type of stone prized by collectors.

Quality is everything when valuing geodes — the quality of the minerals present, the size of the formation, the purity of the color, and more.

Continue reading to learn about the most expensive geodes that have been sold, including the stones they contain and the structures that made them so desirable.

8. Calcite, Pyrite, and Goethite on Amethyst 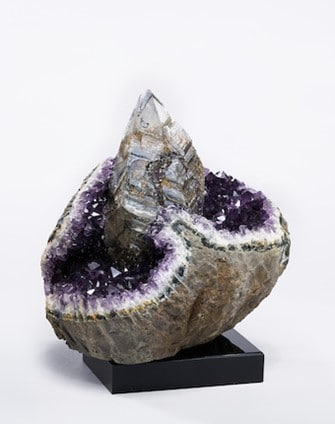 The base stone of this geode is an amethyst crystal formation. The reason it looks amazing and sold for so much, however, is that it includes a mix of other minerals that grow in various formations and give it its unique colors.

They terminate in a crystal made of calcite jutting from the geode’s center into a stony point.

This geode was sold at a Bonhams auction called Mineral Treasures from a European Collector, which was held from November 1-14, 2020. It also sold some of the other rare geodes on this list in the Hong Kong Admiralty. This one went to an unknown bidder for HK$75,625, or the equivalent of USD 9,368.23.

Calcite is a common mineral deposit that forms in geodes alongside the primary mineral. Often, calcite formations damage the purity of the base stone. Other times, the calcite formations are so interesting that they give the geode its unique selling point, as in the case of this example.

Calcite is what is known as a polymorph of calcium carbonate. It is one of the minerals that make up limestone. 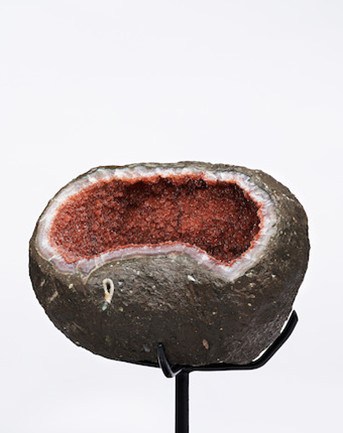 Hematitic inclusions are what scientifically give quartz crystals their red color, which is one of the rarest that can be found (behind amethyst). One of the selling points of this geode is its large viewing cavity, showing an above-average amount of crystals inside.

Quartz cannot be considered a single gemstone only. Depending on many geological factors like heat, depth, pressure, age, and surrounding minerals, quartz can form in many different types, qualities, and colors. Though some of these variants are called simply the color and the quartz, such as red quartz, others are known as completely different stones.

These include onyx, citrine, and even amethyst. They are all colors of quartz. 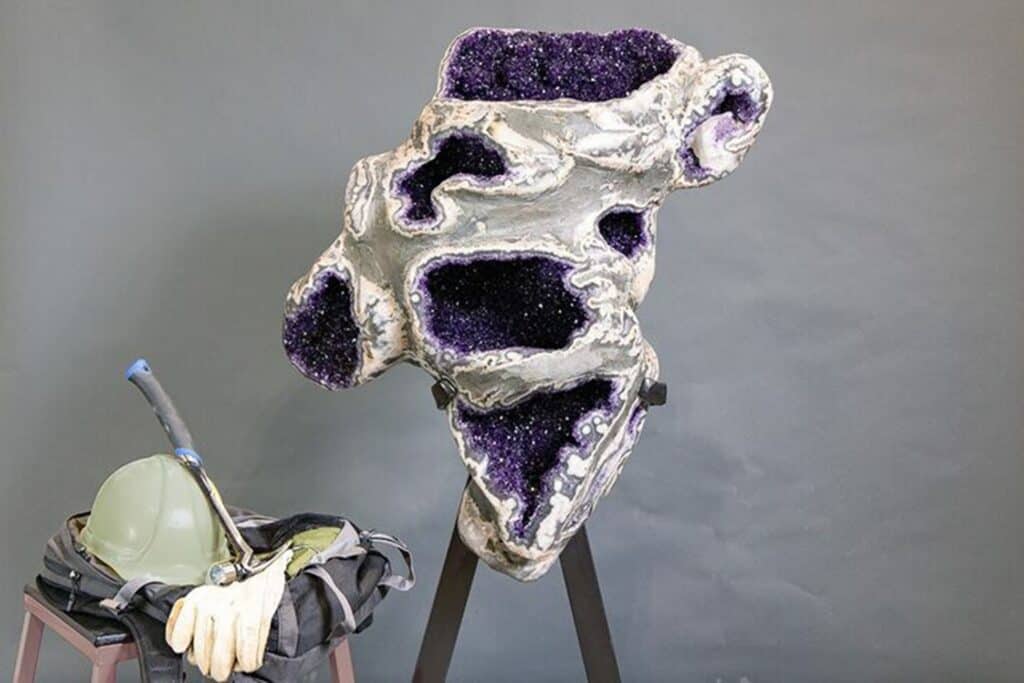 The Multi-Window Amethyst Geode on Metal Stand is a custom creation currently for sale on Fossilera. The geode shines with its incredible violet amethyst formations, extracted from basalt deposits in Artigas in Uruguay, one of the world’s primary sources of amethyst.

This geode is unique in that it has eight “viewing windows,” meaning eight different places that you can see inside the rock to the crystals beneath. The whole thing is 41×33 inches big and comes with a custom metal stand to display it.

Buying both the stone and the stand currently costs $11,500.

Amethyst has been steadily declining in value for centuries as scientists have been able to learn that the stone is actually quartz, colored by impurities in the iron formations and other trace elements. But a few hundred years ago, due to its vibrant purple coloring, amethyst was considered as valuable as rubies, diamonds, or sapphires.

5. Large and Impressive Rock Crystal Eagle on an Amethyst Base 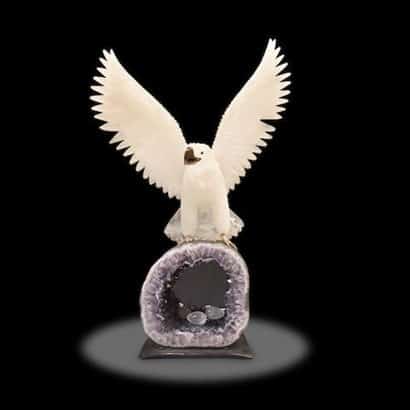 The stone listed as “Large and Impressive Rock Crystal Eagle on an Amethyst Base” is a combination between a geode and a statue. The eagle carving sitting perched on the top rim of the geode is made from rock crystal quartz.

The inside of the geode sparkles with amethyst crystals, though unlike many stones on this list, this display piece has been polished, giving it an even, smooth appearance. Inside the geode are three quartz crystals representing the eagle’s eggs.

Rock crystal quartz or colorless quartz is the stone that crystal balls were made from, as the stone was believed to contain magical properties. Its emotional qualities are said to include clarity, balance, energy, and well-being. 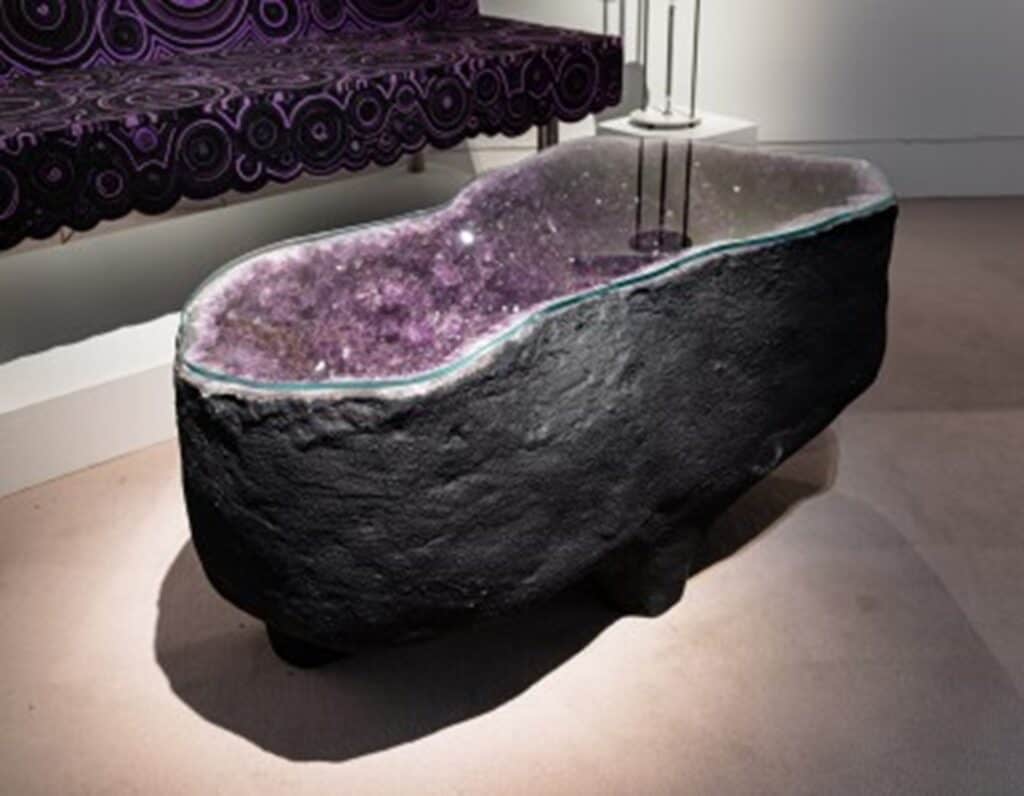 The item listed as Table basse geode amethyste is a low table made from a large amethyst geode. It was sold from a private collection at a Sotheby’s auction in May 2022 known as Lorenz Baumer Collectionneur.

Its final sale price was 37,800 Euros, almost double its initial value estimate, or the equivalent of around $39,399. The table was sourced from Minas Gerais, an inland state in the Southeast of Brazil. The area is known for its gold rush, which led to huge pockets of wealth that today have resulted in gorgeous baroque churches, sculptures, and ornamented mansions throughout the area.

This Sotheby’s collection had some very high-value items, including an antique table circa 1948 by Jean Royere which sold for 252,0000 EUR. A diamond ring known as the “Tour Eiffel” also sold for 80,000 EUR. 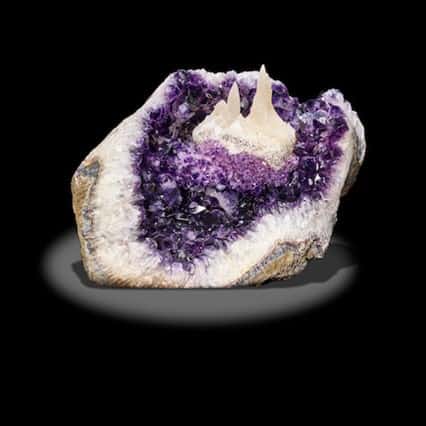 The stone listed on Bonhams as Museum-sized, Spectacular Calcite on Amethyst — “The Cathedral” is a large amethyst geode that contains a spectacular array of calcite, according to its listing (looking at the pictures, we’d have to agree!).

The unique feature of this formation is that at the center of deep purple amethyst, the calcite has formed a geometric crystal pocket, almost like a skyline, giving the stone known as “The Cathedral” its name. The combination of the minerals gives the stone an almost eerily beautiful glow.

The Cathedral for which the stone is named is Cathedrale Notre Dame de Chartres, whose ominous belltowers are mimicked in the mineral’s spiky forms. 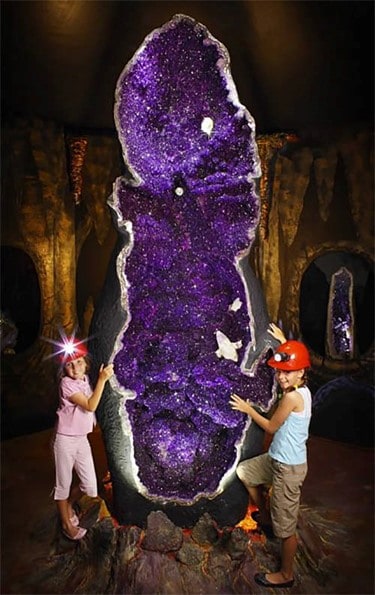 The Empress of Uruguay is the name of one of the world’s largest amethyst geodes. This sparkling purple monument weighs 2.5 tons or 5,500 pounds and was discovered in Northern Uruguay in the Artigas region.

It’s a mining area famous for procuring amethyst and they struck history when they unearthed this behemoth.

The original sale price of the geode was around $75,000, but the Crystal Caves Museum at which it now resides in Australia has received offers as high as $190,000 for its purchase. Its sparkly purple perfection, however, has yet to be resold.

Moving a 5,500-pound stone from Uruguay to Australia wasn’t easy. The founders of the Crystal Caves Museum spent around $25,000 to get it to its new resting place, using a custom crate, packed into a steel container, and lifted by two industrial cranes from its transport into the room at the museum now known as the Empress Room.

1. One of the Largest Amethyst Geodes in the World 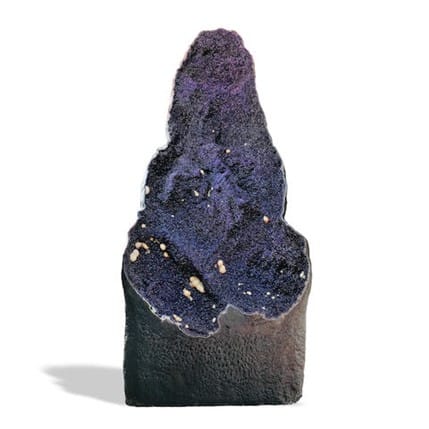 The most expensive geodes ever is also “One of the Largest Amethyst Geodes in the World.” This is what this stone was listed as on Bonhams.

It’s a Uruguayan geode filled with vivid amethyst, speckled with yellow calcite crystals, which are rare deposits that sometimes form in these stones. At different angles, the stone shines in shades of rose, lilac, and blue variations of the amethyst purple hue.

The crystals inside this massive stone, which is 5 meters by 2.3 meters in size, shimmer in every mini formation and ridge. This is the largest amethyst geode ever sold at a public auction, possibly one of the largest in the world.

This stone obviously could not be shipped by conventional means. It had to be bought directly from the Natural History Department in Germany to be relocated from its warehouse. The stone weighs somewhere between 13 and 15 tons, which is around 28,000 pounds.

8 Most Expensive Roller Coasters Ever Built

8 Rarest Rolex Watches Ever Made