8 of the Most Expensive Hotels in Las Vegas

The Las Vegas Strip begins on Sahara Avenue and ends on Russell Road. Since the 1950s, it has been expanding into the nation’s nightlife capital. It now includes a larger area that encompasses 20 of the world’s largest casinos, 22,000 annual conventions, performing arts centers, entertainment venues, and of course, some of the most decadent hotels in the world.

The most expensive Las Vegas hotels represent the best the strip has to offer its high-rolling celebrity patrons, as well as those with a fortune to blow on the vacation of a lifetime. Continue reading to learn about the accommodations that await at the priciest hotels in Sin City. 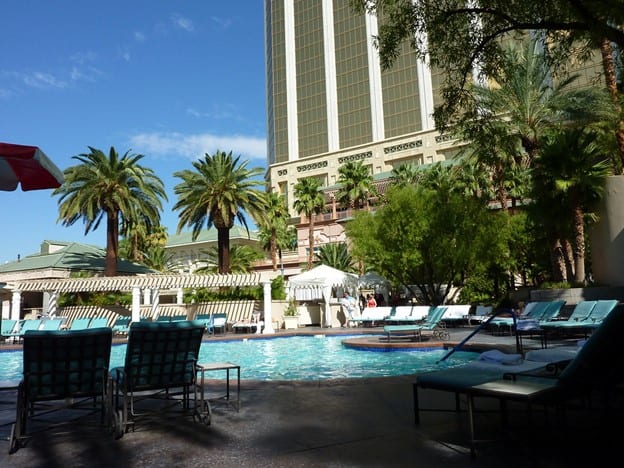 Unlike many of the hotels on this list (basically all of them), the Four Seasons doesn’t feature an adjacent casino or game room. Instead, this hotel focuses on the restaurant, spa, cocktail, and sleep experience, climaxing with its $3,000 room, the Presidential Strip-View Suite.

This room gives you a view of the casinos on the strip without having to partake in them. Meanwhile, you’ll be dining in 5-star luxury at the Veranda, or sampling world-famous cocktails, or using the luxury pool, fitness center, and the Forbes Five Star Spa, which includes steam rooms, facials, and saunas. Staying at the Four Seasons also gives you exclusive access to shows and restaurants on the strip.

The Four Seasons is famous for its cocktails, one of which is the to-die-for masterpiece called, Accidental Oasis. It comes in a deep glass garnished with flowers and cinnamon sticks. The cocktail is made from Bacardi pineapple rum, pandan, coconut, pineapple, prosecco, and a dash of lime. 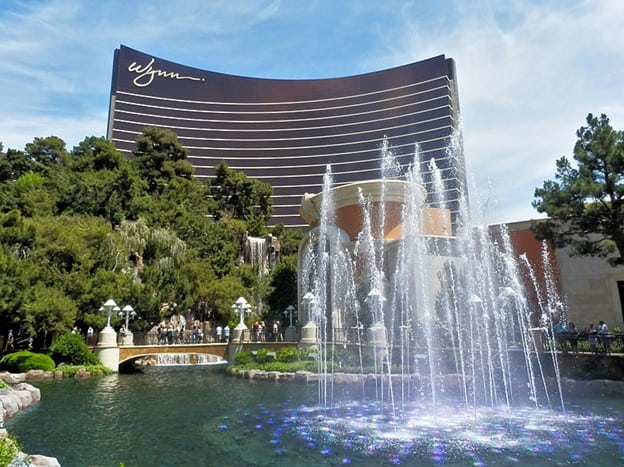 The Wynn is one of Las Vegas’s biggest names in luxury resort properties, so you may be surprised that it’s not further up the list. Stylish and modern, the Wynn Resort features the Encore Three-Bedroom Duplex, a room that costs $5,000 per night and is built to be a boutique fit for a king and queen.

In addition to the room, patrons also get access to the Wynn Plaza, which features some of the most luxurious shopping on the whole strip, as well as the Wynn Esplanade, which is the on-site casino. Combine that with the restaurants, Mizumi, Lakeside, and SW Steakhouse and $5,000 a night doesn’t sound so bad.

The Encore Las Vegas is part of the umbrella of the Wynn brand and is one of the busiest resorts, casinos, and retail centers on the whole of Vegas Boulevard. The Wynn Plaza alone is 76,000 sq. ft. 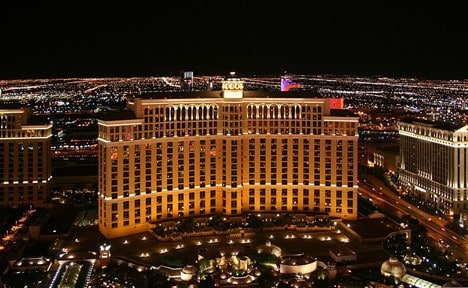 The Bellagio features a 4,075-sq. ft. room that costs $7,000 per night. It’s called “The Chairman” and reflects the ornate, palatial décor of this resort. This suite rests on the top of Spa Tower, which has its own fountain, bar, solarium, fireplace, and indoor garden.

The Chairman also includes other vacation amenities like a 24-hour butler, a whirlpool tub overlooking the strip, and premium seats at prestigious restaurants through MGM Resorts International.

In addition to the tasteful suite, the Bellagio is well-known for classy dining options, including the Picasso restaurant, which serves award-winning French cuisine, and the Yellowtail Japanese Restaurant & Lounge. The hotel also features a luxurious poolside cabana, complete with daybeds, and a huge casino adjacent to the resort. 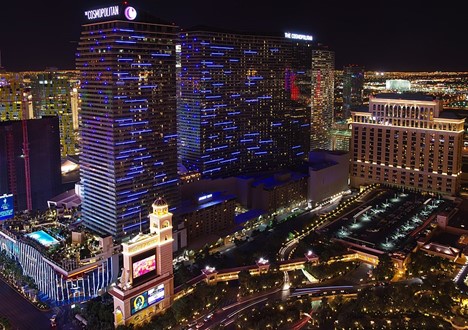 The Cosmopolitan’s most expensive suites are known as the Bentel & Bentel Suites, which cost $25,000 per night. Unlike many Vegas resorts, which portray antique styles from Italy or Japan to create a sense of luxury, The Cosmopolitan is true to its own style, presented in a contemporary artistic vibe. The architects Bentel & Bentel designed the resort’s most luxurious suites.

Even if you don’t stay in the most expensive suite on-site, you can still enjoy the resort’s high-end eateries, casino, salon, spa, and more. Uniquely, the hotel also includes hammam bathing facilities, which are relaxing steam baths more commonly associated with Islamic culture.

The Bentel suites on the 70th floor of The Cosmopolitan are designed after black and white cinema classics. They include not only a private movie theater and celebrity portraits but also a movie screen above your luxury tub. Leonardo DiCaprio is a well-known patron of this suite, well-known for bringing out his inner Gatsby and throwing 30-person parties there. 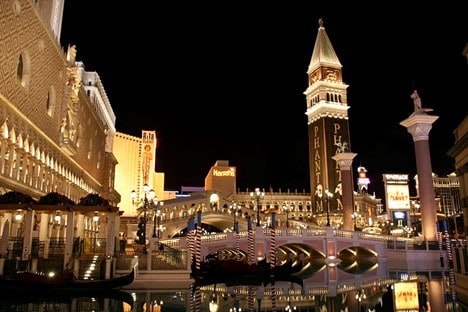 The Venetian Resort is one of Vegas’s many Italy-themed accommodations. But in this case, rather than Ancient Rome, the Venetian takes after Venice, Italy’s city of love (and canals). To authenticate the inspiration, the Venetian Resort features actual gondolas to take you on a tour of the hotel in its artificial waterways.

The real attractions are the rooms in the Venetian and Palazzo Towers, which are elegant, opulent experiences that cost $25,000 per night. Shoppers flock to the Venetian for its Grand Canal Shoppes, basically a private shopping district where patrons can partake of luxury Italian merchandise to their heart’s content.

The Venetian already includes the Palazzo and Sands Expo and is currently expanding to include the MSG Sphere. With 4,049 rooms and 120,000 total sq. ft. of casino space, The Venetian in Las Vegas is the second-largest hotel in the world, beaten only by The Venetian Resort in Macao. 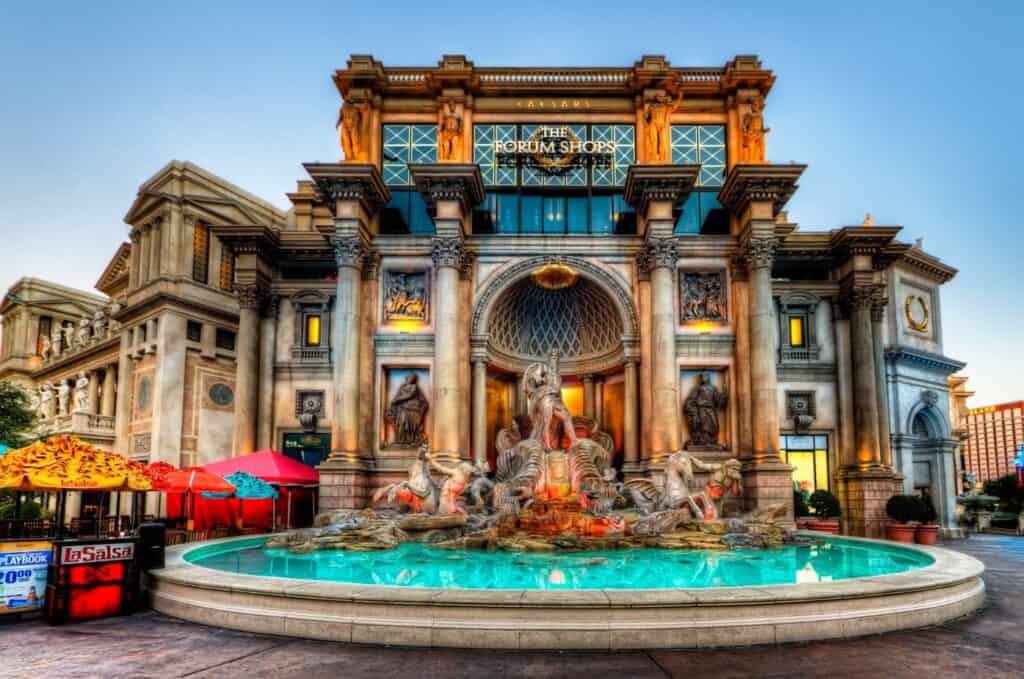 Caesars Palace is arguably the most recognizable Vegas hotel, partly because it’s one of the oldest. The resort is designed in the style of Ancient Rome, which was known for a lot of things, including glorious excess. Caesars Palace includes one of Vegas’ most hopping casinos, restaurants owned by such famous chefs as Bobby Flay and Gordon Ramsay, and the Omnia nightclub, which has DJ Steve Aoki on retainer.

Aside from the Roman décor, this villa and the other named villas at Caesars Palace feature many unique amenities, including private billiard rooms, fish tanks, fire pits, pianos, spas, and even an “Arctic Ice Room,” where you can sit on heated benches while the room snows on you. These rooms have seen many celebrity patrons such as Celine Dion, Janet Jackson, and Elton John. 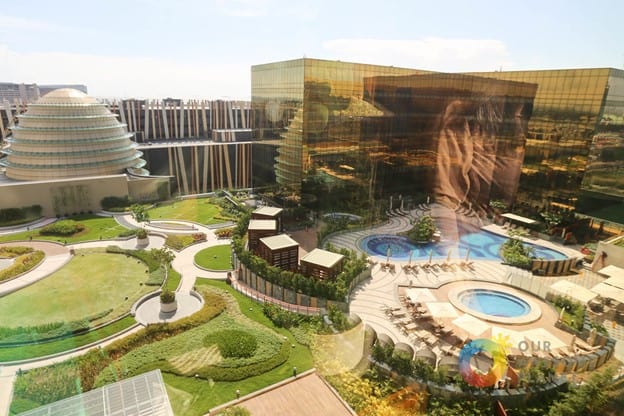 The Nobu Hotel is actually a part of the Caesars Palace resort brand but with the exclusivity and luxury ratcheted up another notch. Appropriate to the name, the Nobu Hotel features Japanese-inspired architecture and interior design for a more Zen-like luxury experience for patrons that don’t prefer the glitz and glamor of the rooms at Caesars.

The Nobu Villa, which costs $35,000 per night, features in-room massages, sauna and spa options, and a host of options for decadent Japanese cuisine.

The Nobu Hotel and Nobu Restaurant are co-owned by the famous chef, Chef Nobu Matsuhisa, Drew Nieporent, Meir Teper, and their business partner, whom you may have heard of, the Goodfella himself, Robert De Niro. 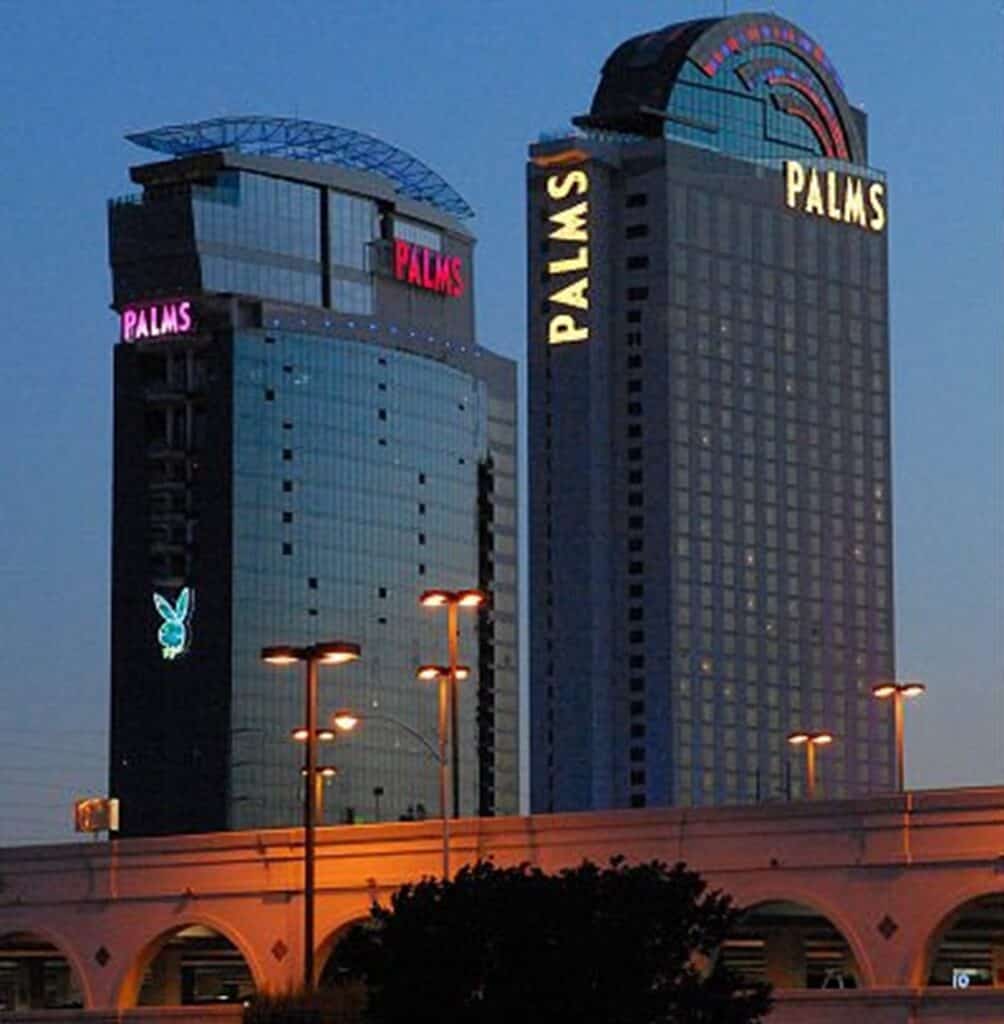 The most expensive Las Vegas hotel is the Palms Casino Resort. This hotel boasts the most expensive suite in Vegas and one of the priciest in the world in its “Empathy Suite,” which is a room that costs $100,000 per night. The resort has another pricey room called the Two-Story Sky Villa.

Featuring not only expensive accommodations but high-end dining options like the Scotch 80 Prime Steakhouse, which serves some of the most expensive meat in the world, the Palms Casino Resort is the king of the heap when it comes to expensive Vegas hotels.

The Empathy Suite at the Palms Casino Resort is a 9,000 sq.-ft. room that not only costs $100,000 per night but also comes with a two-night minimum. It includes a pool, a thirteen-seat bar, famous paintings, a butler, chauffeur, VIP entertainment access, $10,000 in Palms casino credit, two master bedrooms, a massage room, and perhaps most famously, a huge water tank that contains two bull sharks.

From the contemporary décor of the Cosmopolitan to the ancient luxuries of Caesars Palace, hotels in Las Vegas are known around the world for their style and beauty. Use this list as your guide to the most expensive accommodations that money can buy if you’re looking to be the highest roller of them all. It’s no accident that the more expensive the room, the higher up the hotel buildings you go. At the very top, you get a god’s eye view of the entire strip, like the king these hotels want you to feel like.

8 Most Expensive Golf Courses in the World