8 Most Expensive Porsche Models Ever Made

Porsche is the abbreviated name of Dr.-Ing. h.c. F. Porsche AG, a manufacturer in Germany that makes not only some of the most famous racing supercars ever built but also consumer-grade sedans and SUVs. The company is a part of Volkswagen and is based in Stuttgart, which is in Baden-Wurttemberg in Germany.

The brand was started by Ferdinand Porsche in 1931. Since then, Porsche has sold millions of cars and even built a tank during WWII, the Panzerjager Elefant. Today, Porsches are well-known as expensive consumer vehicles. The ones featured on this list are the priciest out there, including the most expensive you can buy right now as well as the most expensive ever sold.

Here is our list of the 8 most expensive Porsche models.

The Cayenne Turbo GT is a Porsche designed for dynamic, precise performance. It offers a high-powered experience, with an engine that puts out 631 hp. There are GTS, S, and E-Hybrid variants of the Cayenne models. However, the Turbo GT is the most expensive as well as the most powerful.

This is the version for people that want a race-ready car that can handle corners and sprints with incredible dynamic performance. The PAA (Porsche Active Aerodynamics) comes with an adaptive rear spoiler and a Sport Response button. The sale price of the Cayenne Turbo GT starts at $180,800. 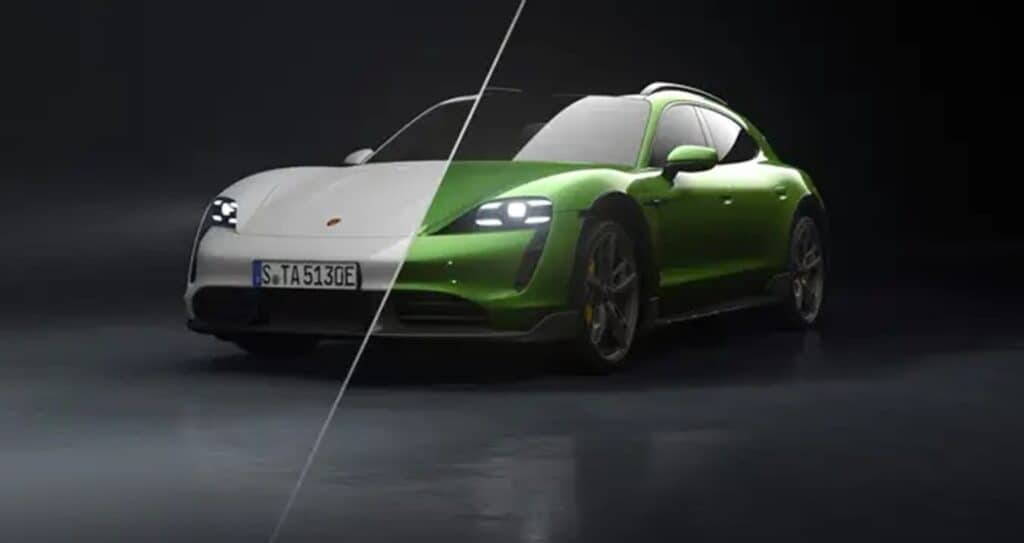 The Porsche Taycan Turbo S Cross Turismo is a powerhouse with 616 hp and an impressive 0-60 time of 2.7 seconds when launch control is enabled. With Overboost Power enabled, which puts the electric engine to work as hard as it can, the car can get up to an astonishing 750 hp!

Not every model of the Taycan Turbo can reach that insane power level. Its two electric motors interact with components that share parts in common with the Porsche sedan equivalent. The lowest end of the model’s power range puts out 469 hp. At the highest trim level, though, this Porsche is one of the most powerful electric cars in its class. 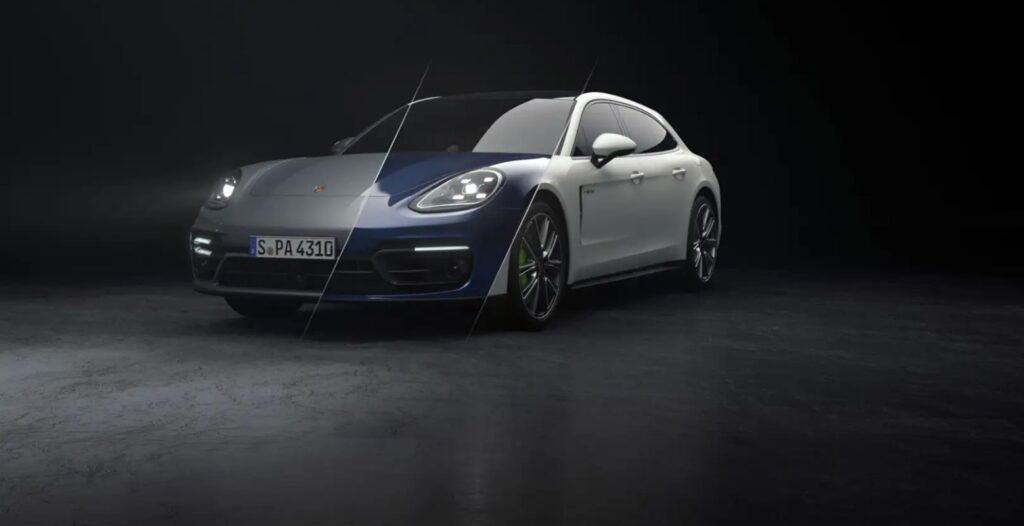 The Panamera Turbo S E-Hybrid Executive is the highest-end version of this luxury line of Porsches. It features a twin-turbocharged V8 engine that puts out 563 hp, as well as an electric motor that provides another 134 hp. On the electric engine, its top speed is 87 mph. On the gas engine, it can get up to 196 mph and go 0-60 in 3.1 seconds.

The starting price of the Panamera Turbo S E-Hybrid Executive is $200,200. 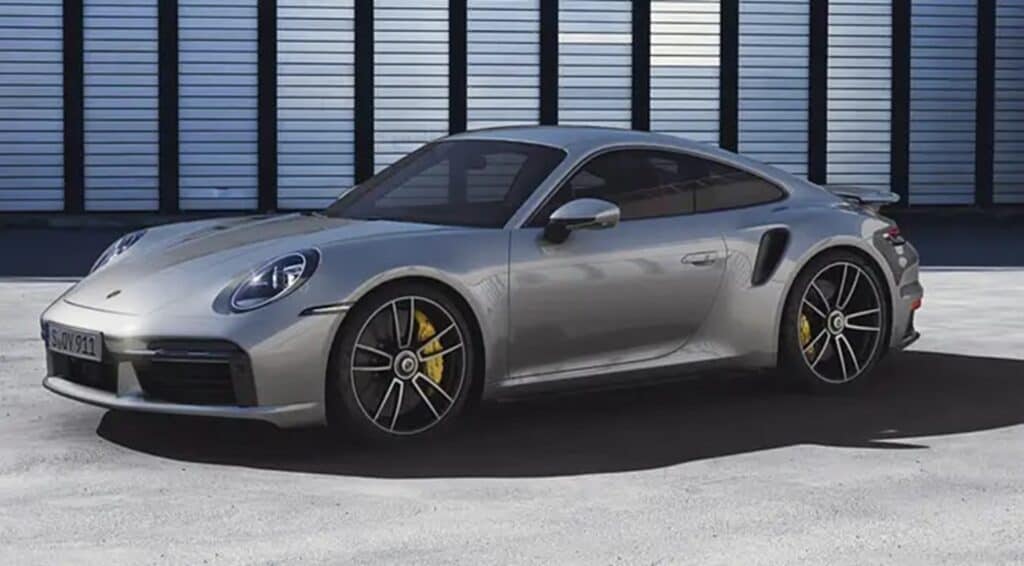 Its engine is a 6-cylinder VTG twin-turbocharged boxer 6 that can get up to 640 hp. It has an 8-speed transmission as well as silver tailpipes (with the sports exhaust add-on), a deviated stitching interior, a Burmester sound system (for another $4,000), LED Matrix headlights, and more.

A Porsche 959 Paris-Dakar sold for $5.945 million at a Sotheby’s auction in 2018. It was the Porsche 70th Anniversary Auction, so you can bet that passions were high to run away with the most prestigious item on the docket. This Group B rally car was built in 1985 and raced with other developmental prototypes at the Paris-Dakar rally in 1985 (hence the name).

The default build of the Porsche 959 included a twin-turbocharged flat-six engine derived from F1 tech, making this Porsche a supercar in its own right. With the rally specs, which included a Rothmans livery (in other words, the original racing paint scheme), this car ruled the auction like it used to rule the track.

This car is one of the rarest Porsches out there. Three of these models raced the Paris-Dakar rally, of only seven examples ever built. Since four of those are retained in storage by Porsche, you can bet this car caused a commotion when it went up for sale. 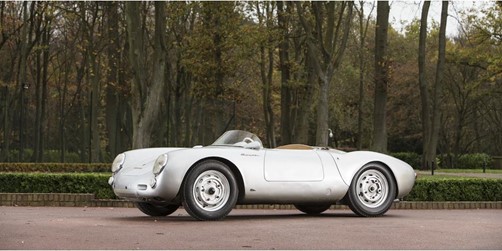 The oldest car on this list is a 1956 Porsche 550 Rennsport Spider, which is the last model of this particular car. They began production in 1953. The age combined with the intense racing conditions has prevented nearly all of the Rennsport Spyder models that have survived from retaining their original parts. The special thing about this Porsche 550 was that it was built but never raced, meaning it has all the parts it was built with.

The 1.5 L engine can push the car to 110 hp, which is intense for 1956. The Porsche 550 prioritized low weight and a balanced design, incorporating a horizontal air-cooling system for its engine. It sold for Bonhams at a Goodwood Revival sale in 2015. The final price was $6.1 million.

The Porsche 550 is most famous not as a racer but as the model of car that the movie star James Dean was driving when he crashed and died.  His 1955 Spyder (he called it “Little Bastard”) slammed into a 1950 Ford Tudor on its way to a race in California. Dean was not only a movie star but a budding motorsports champion when he had that fatal crash on September 30, 1955. He was 24 years old. 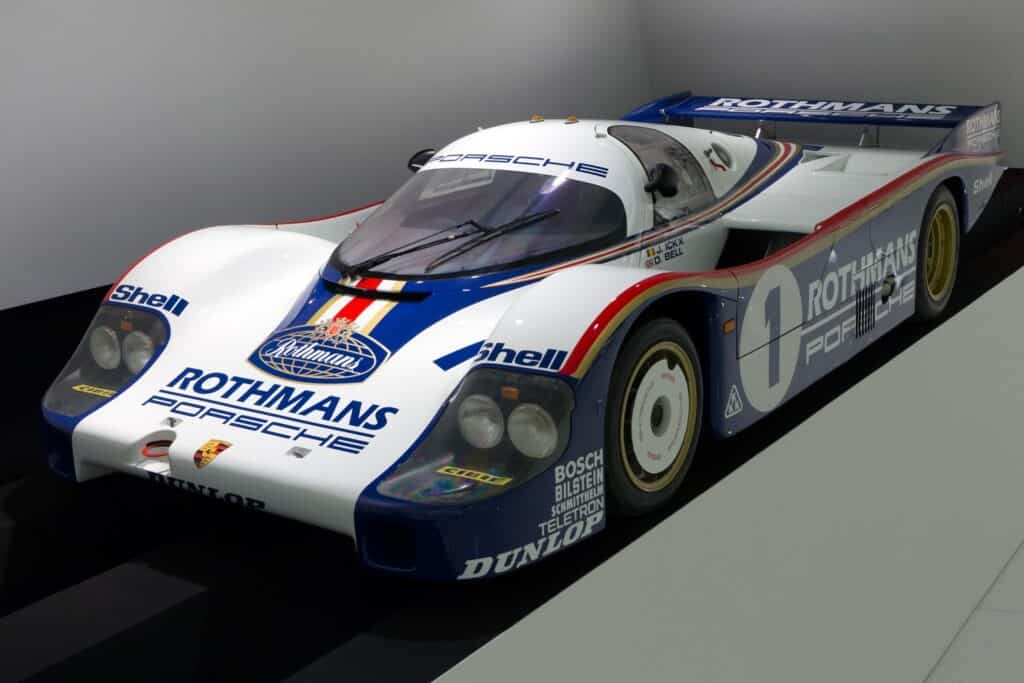 When this Porsche 956 was designed in 1983 for the 24 Hours of Le Mans racing event, it pioneered the use of ground effects to maximize aerodynamic flow. This model won prizes at Le Mans ten times in its lifespan with an engine packing 630 hp at 8,200 rpm.

The car sold at a Gooding and Company auction in 2015 for $10.12 million, blowing the max estimate of $9 million out of the water. The engine is an insane twin-turbocharged flat-six, 2.65 L model that is so powerful, it had side exhausts that launched flames from the side of the car as it revved up.

Only 10 Porsche 956 examples were ever built. The one that sold at the Gooding and Company auction was the third of these, built in 1982. It is the exact car that won the 24 Hours of Le Mans event in 1983. It was raced by titans of the industry, including Bell, Ickx, Schuppan, Haywood, and Holbert.

The most expensive Porsche is the Porsche 917K. This infamous Porsche was built in 1970 as a test car for the Le Mans event. It was fitted with a 12-cylinder, 4.5 L engine designed by Hans Mezger for the highest possible performance. People heard all twelve of those cylinders rev up a mile away!

This Porsche 917K became world-famous when it was used as the title car in the film, Le Mans (1971), starring Steve McQueen. For 20 years after that, the 917K sat in a barn before being restored and sold in a 2017 auction at Pebble Beach. Gooding and Company, who oversaw the auction, were not exactly surprised when the world-famous car sold for $14 million. But we’re guessing they’re delighted to have been the moderators of the current most expensive Porsche ever sold.

The 24 Hours of Le Mans race is more a test of endurance on the part of both driver and car than the average race. While most races choose winners based on the lowest time to complete a fixed distance, Le Mans chooses its winner based on the maximum distance the cars can travel in 24 hours. This means that mechanical durability is just as important as speed in this race, which is reflected in the Porsche 917K’s sturdy design.

Porsche has been making racing supercars, SUVs, and even tanks for over 90 years. In that illustrious history, these 8 cars are split into two categories to demonstrate the strength of the brand: both the best of the best in the current lineup and the most valuable ever sold to collectors at high-value auctions. In short, these are the cars that define the name, Porsche.

10 Most Expensive Magic The Gathering (MTG) Cards Ever Sold