Harley-Davidson was founded in 1903 in Milwaukee, Wisconsin. Motorcycle manufacturing was just becoming an industry, one that the Great Depression would all but destroy. Only Harley and Indian Motorcycles survived the economic crisis. Harley-Davidson now sells not only motorcycles but also apparel, accessories, scale models, toys, and even video games.

Continue reading to learn about Harley-Davidson and the 9 most expensive bikes they have ever sold.

The Harley-Davidson 7D Twin motorcycle is part of Harley’s heritage, which started in 1908 with their first twin-cylinder bike design. This 1911 7D model is one of 27 rumored to have been made, but only 4 are believed to still exist.

It has the tensioning wheel that Harley first built for the 1910 singles model.

For this bike, Harley patented a fender skirting that protects the wheel’s left side, which shields the drive belt from mud and grit. In previous models, this debris caused the bikes to slip, making the 7D one of the first in a long line of increasingly user-friendly machines.

The color of the bike, which is Renault Grey, was likely the only color that Harley had available. This was made long before the age of customized, souped-up machines decked out in bright colors and designs. 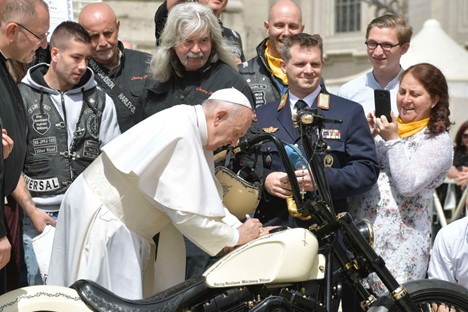 The motorcycle known as the Harley-Davidson Dyna Super Glide is best known for its ownership by Pope Francis after being donated to his imminence in 2013.

The bike itself is worth about 16,000 euros, but the reputation of the machine is significantly increased by the allure of the Pope.

His Holiness even autographed the tank of the motorcycle with a silver sharpie (“Francesco”). The Pope did this to sell the bike at auction, which he used to fund the Caritas Roma, a Catholic charity that benefits poor people in Roma. It made $280,000.

After the cycle left its Bonhams auction block, the money went to creating a shelter in Rome and a soup kitchen called, Don Luigi di Liegro. 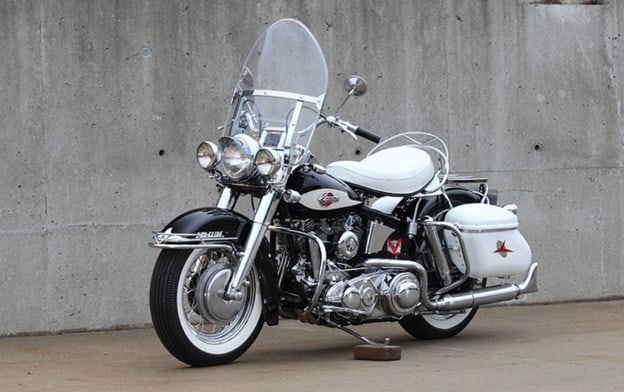 The Harley-Davidson FLH Duo-Glide is a motorcycle from 1959, previously owned by Jerry Lee Lewis, the rock n’ roll music legend. It was gifted to him in the 50s and has been in Lee’s private collection ever since before finally selling at a Mecum auction for $350,000.

The Duo-Glide was Harley’s advancement of their design away from the hardtail frames and towards the now-iconic dual-point ignition system with modern rear suspension.

The body of the bike is black with a white leather seat, tall windscreen, and chrome accents.

Lewis bought his first motorcycle back in 1951, a Cushman scooter. Once Lewis’s first hit for Sun Studios sold 300,000 copies, he was in the business for a better bike and turned to this now-historic Duo-Glide. The song was “Crazy Arms.” 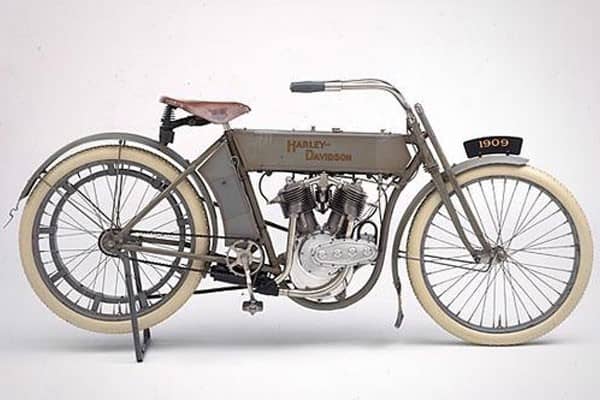 The Harley-Davidson Model 5-D Twin motorcycle was the first production model using the V-Twin engine, invented in 1906. This 1909 bike is nearly the oldest motorcycle on this list, and the first to produce the roaring noise from that 45-degree engine design that is now the iconic Harley-Davidson trademark.

Only 27 of the 5-D Twin motorcycles were made and this is the only one known to exist. It is now on display at the Harley-Davidson Museum in Milwaukee.

This bike included a Schebler carburetor, built at a factory in Indiana that is now registered as a historic place. This factory was state-of-the-art for its time, producing auto and motorcycle carburetors at the height of the decade’s ability. 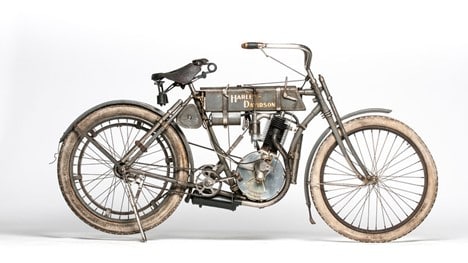 Only 207 Strap Tank motorcycles were built back in 1907, which nudges this example into its status as the oldest ride on this list of expensive Harleys. It was in the same family for over 75 years before being sold to the collector, E.J. Cole in 2015 for $715,000. It’s now part of the collection at the Sturgis Museum.

The serial number on this motorcycle indicates that it was the 37th strap tank they built, making it the 94th motorcycle ever built by Harley-Davidson.

This is considered the best unrestored version of this model in existence.

The “strap tank” is named for the steel bands plated with nickel that hold the oil and fuel tanks away from the frame. By 1908, the Harley-Davidson company expanded its enterprise into bike number 1,000 and beyond, making this machine, part of the original 100, incredibly valuable. 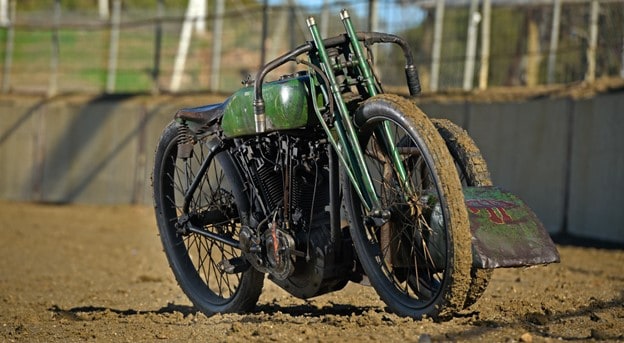 The 8-Valve Racer is a fantastic historical piece that has been steadily climbing in value for half a century. The bike was built in 1927, nicknamed the “million-dollar baby” due to its climactic price tag of over a million Australian dollars (around $940,000).

It raced almost a century ago and hasn’t been ridden much since, giving this Class A racing Harley a lot of speculative (and valuable) history.

The bike represents one of the last 8-valve bikes made by the company since they were starting to create new and more powerful ways of powering their rides in the late-20s.

The Depression caused Harley-Davidson to skip a class to the Class C racers, which were based on a streamlined production model that got them out cheaper and quicker. However, this gave them more generic sidevalve engines that haven’t accrued as much value as the 8-valve OHV models (“overhead valve”). 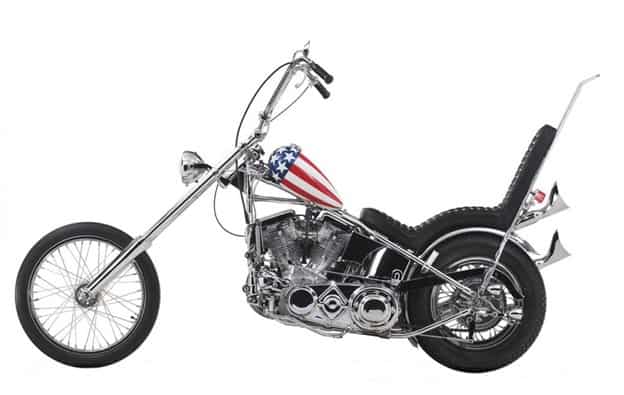 The Captain America Harley-Davidson is an expensive and absolutely iconic bike. No one knows exactly which model was used as the base for this movie prop, but a 1952 HD Hydra-Glide is the most likely candidate, which the actor Peter Fonda bought at a police auction.

The bike debuted in the film, Easy Rider, starring Fonda and Dennis Hopper.

The bike was sold in 2014 at the “Profiles in History” auction in 2014 when it was still owned by Michael Eisenberg. The auction ended with the bike being sold for $1.35 million.

There’s some question (even a legal dispute) over whether this motorcycle was one used in the film (there were as many as four on the set), but just the idea of it was worth over a million to someone.

The dispute over this bike comes from the previous owner, Haggerty, dismantling the bike he claims to have bought in 1996 for $63,000 and selling pieces of it to other owners. This created some doubts about the status of the bike sold at the auction as the chain and fender, for instance, had been sold earlier.

The original frame may have even been sold to the National Motorcycle Museum in 2002. 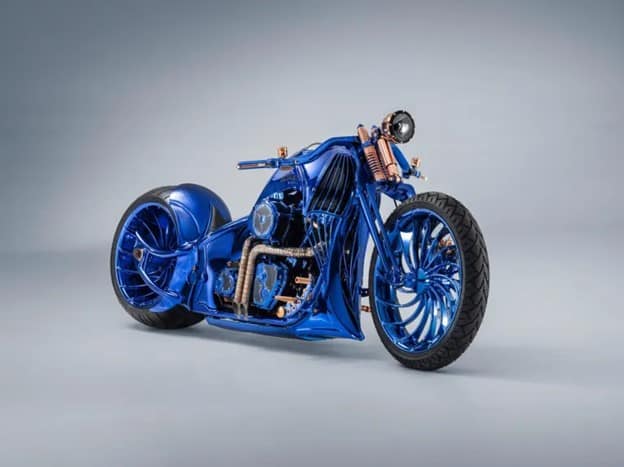 The bike known as the Harley Davidson Butcherer Blue is an iconic, unique ride featuring a diamond-encrusted chassis, screws plated in gold, and a beautiful blue design. The motorcycle even has an on-board safe, containing rings and a watch from the jeweler Carl F. Bucherer.

Rumor has it that the Bucherer workshop spent over 2,500 hours making the add-ons for this machine.

The Switzerland-based Harley-Davidson workshop called Bündnerbike created this ride completely by hand. Every piece of the bike has been sculpted, welded, and polished by hand, then coated with iridescent blue. The bike costs the CHF equivalent of $1,974,253.28.

This motorcycle combines Harley-Davidson design with pure luxury. The throttle valves are plated in gold. The watch holder in the safe also winds the watch, meaning your watch will never run out while the bike is in your garage. The Solitaire ring by Butcherer is fitted with a 5.4-carat diamond. 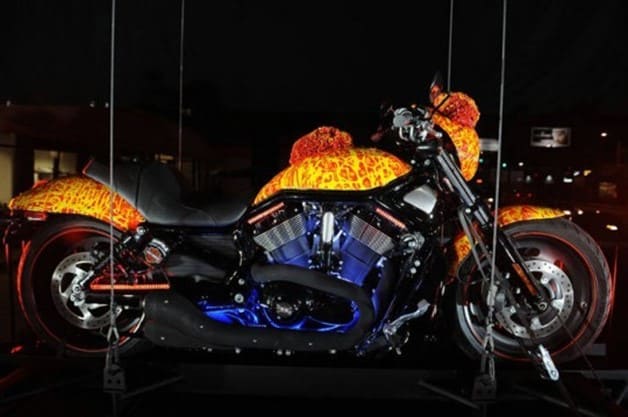 The most expensive Harley Davidson is the Cosmic Starship Harley. This motorcycle is done in the Cosmic Existentialist style, sometimes listed as “Cosmic X.” It refers to the art of Jack Armstrong, who founded the style in 1999 based on famous gems and the works of Andy Warhol and Jean-Michel Basquiat.

He designed the Cosmic Starship Harley after buying the bike new back in 2009. He then transformed it into the art showcase seen here with the cosmic flame designs and blue-lit engine chassis.

The bike is both a luxury ride and a piece of high-class art, proposed to be worth up to $35 million.

Harley Davison used to design their bikes with old-style panhead motors until 1966 when the demand for more on-board power proved too great to ignore. Their new design is the now-iconic rocker box with the flat-headed surface, nicknamed the “Shovelhead” design.

8 Most Expensive Cows in the World 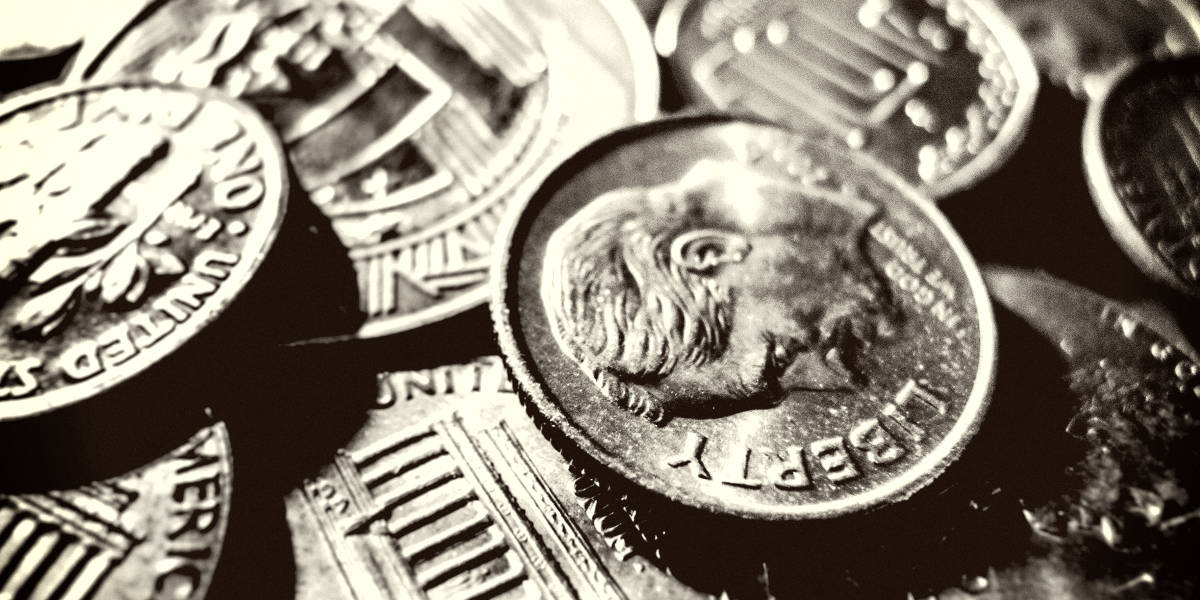