8 Most Expensive Cows in the World

Cows were domesticated around 10,000 years ago. The first common species of domesticated cow was called aurochs, a wild animal living throughout Eurasia. This species eventually went extinct in the wild because of habitat loss and overhunting.

Cows were originally kept for a wide range of purposes. They were eaten, but they also served as draft animals, helping pull heavy loads on the farm and doing other work.

Keeping domesticated cows got more popular, and new breeds were born as a result. Depending on the region, the cow might develop different characteristics because of breeding and climate factors.

Beyond serving as food and work animals, cows are historically part of several religious and social traditions. In Hinduism, the cow is a symbol of “divine and natural beneficence.” Similarly, cows have often been a status symbol throughout history, indicating wealth and prosperity.

The word cow technically refers to female cattle, but Encyclopaedia Britannica points out that it’s commonly used for all “domestic bovine, regardless of sex and age.” With this list, we’ll look at the most expensive cows based on that definition. Keep reading to learn more! 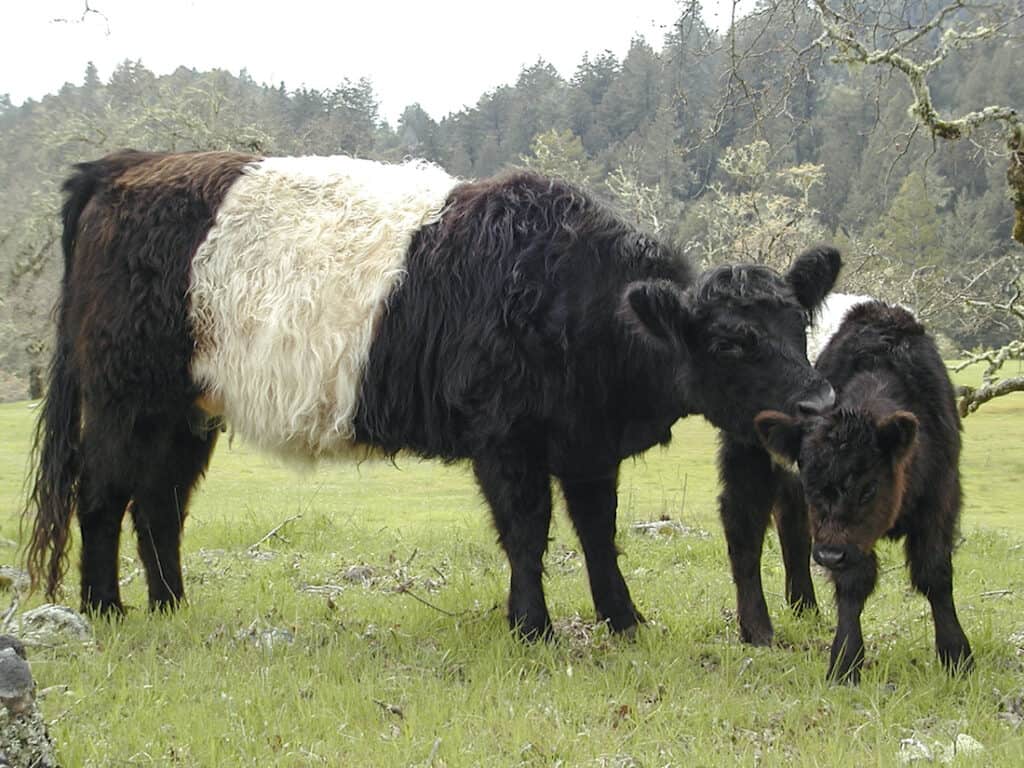 Kicking off our list is the Belted Galloway cow. This breed originated in southwestern Scotland, a region of rough hills and rugged terrain.

The cow was developed during the 18th and 19th centuries to make a standardized cattle family with solid environmental adaptations.

According to one report, these breeding efforts were successful: “Galloways came to be celebrated for their efficiency on rough forage, maternal ability, and high-quality beef. A herdbook was established in 1877.”

Today, farmers characterize Belted Galloways by their distinctive white “belt.” The rest of the body is often black, but the breed can develop other colors as well.

Most Belted Galloway cows sell for about $1,000 each. That price depends on a lot of competing factors though, so it’s possible to buy one for more or less depending on the specific animal.

Although breeding history is pretty well-documented, the origin of the Belted Galloway’s white belt is unclear. 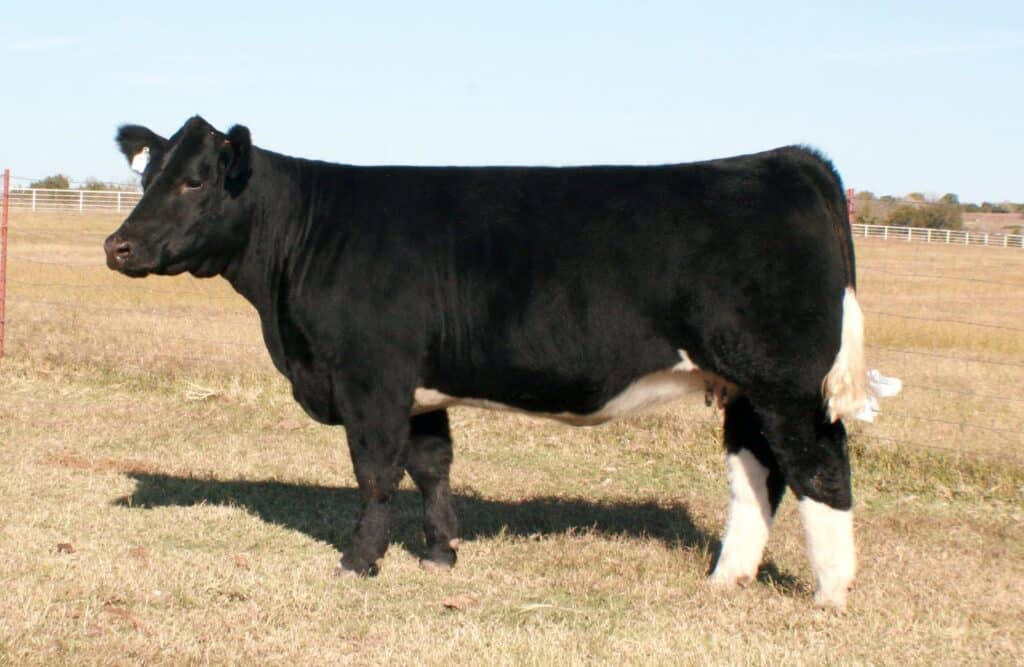 At number seven is the Maine-Anjou, a cow of French origin commonly used for milk production. The breed is large, with females often weighing more than 1,500 pounds and males coming in upwards of 3,000 pounds. Their muscular bodies make them strong and sturdy animals, but that doesn’t mean they’re threatening.

Maine-Anjou prices depend on the cow’s age, sex, history, and other factors, but you could easily spend upwards of $2,000 on one of these cows. 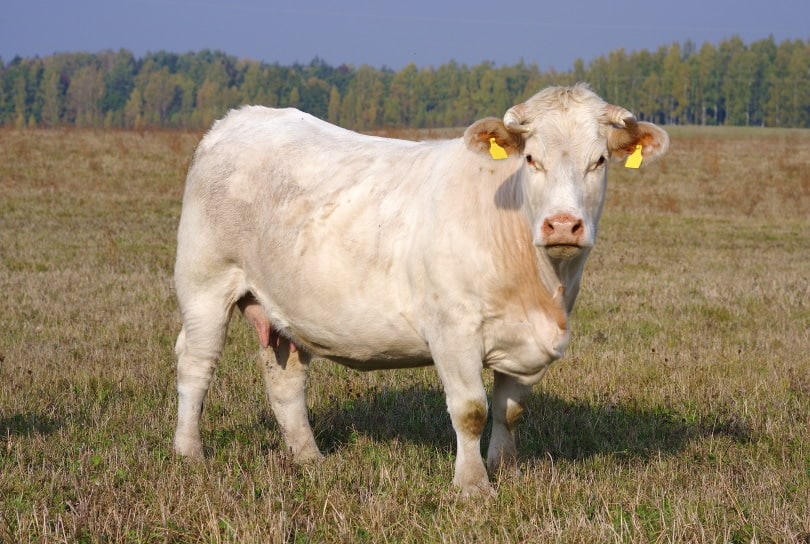 Charolais cows come from France, but they’re very popular throughout Europe and North America. Like other breeds, these animals are often used for beef production and crossbreeding.

Charolais cows are very old. In fact, they’re some of the oldest breeds of French cattle in existence. The breed may have originated way back in 878 AD before fully developing around the 16th century in the Charolais region of France.

Modern-day Charolais cows sell for about $2,800 each. That price varies depending on the specific animal’s age, sex, and reproductive status (AKA whether or not it’s pregnant and/or has been pregnant in the past).

Charolais cows were introduced to the United States in the 1930s. 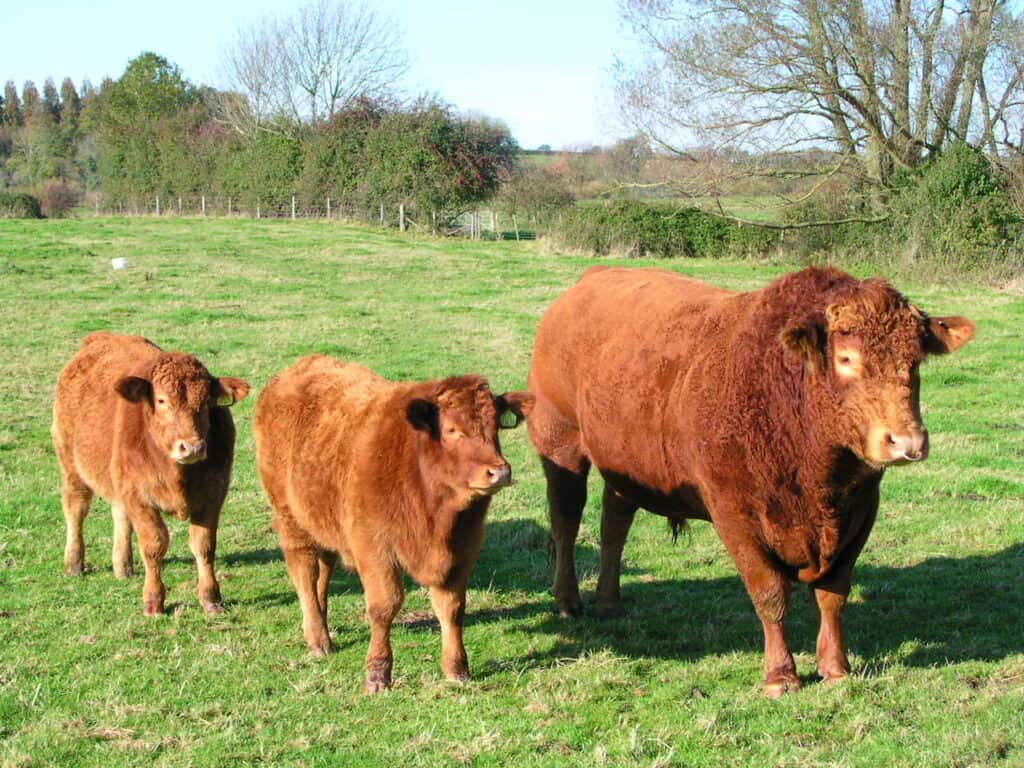 Coming in at number five are Devon cows. Although their exact origin is unknown, experts generally say these cows come from the United Kingdom. The cows made their way to North America when colonists landed at Plymouth in the 1600s.

The hardy animals did well there thanks to weather-proof attributes and high fertility rates.

Devon cows mainly serve as beef cattle today. The animals are easily recognizable thanks to their thick coat of short red hair, but they can also develop longer curly hair while living in cold climates.

“With a fine bone structure, Devon Cattle have a stocky appearance because of their thick muscling,” says one report, “This gives them a high carcass yield when they are used as beef cattle.”

Overall, Devon cows can sell for nearly $6,000 a piece, making them the fifth most expensive cows in the world.

One of the earliest records of Devon cows comes from 55 BC — more than 2,000 years ago! 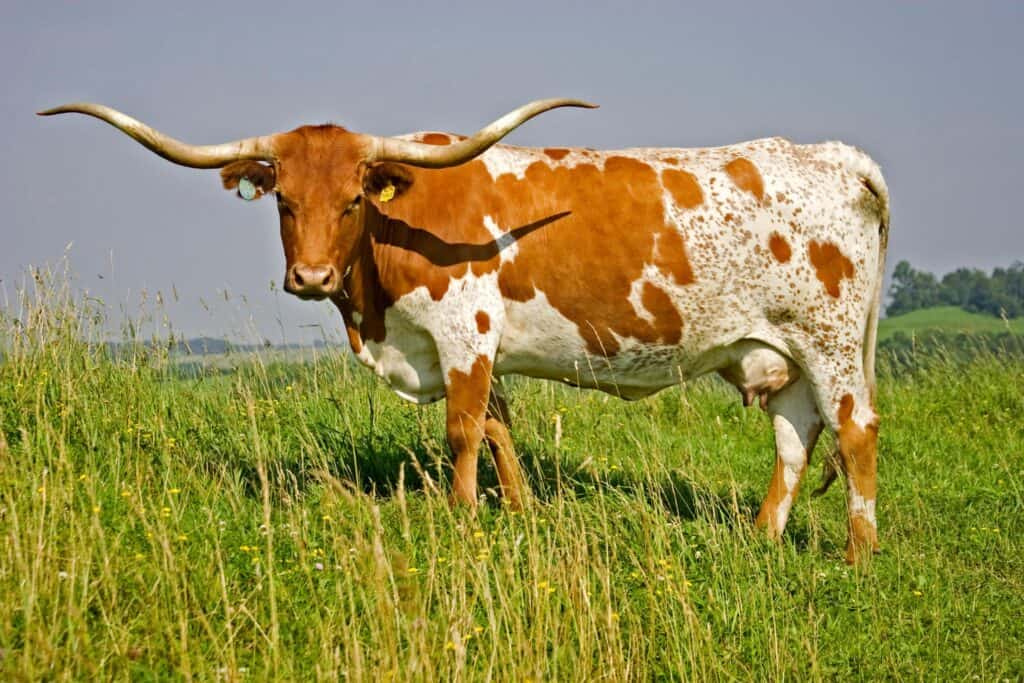 Unlike many cows, the Longhorn isn’t usually used for meat. Instead, these cows often show animals, competing at events like the Horn Showcase in Texas.

The cow is rated based on physical attributes and winners get high-profile exposure in the Longhorn world.

Longhorns have a deep connection to Texas, but they’re not actually a native species. These cows were introduced to North America when Spanish explorers visited the region alongside their cows. Some cows were left behind and moved in permanently.

Modern Longhorn prices depend on a lot of factors, but you could easily spend $10,000 on one of these cows. 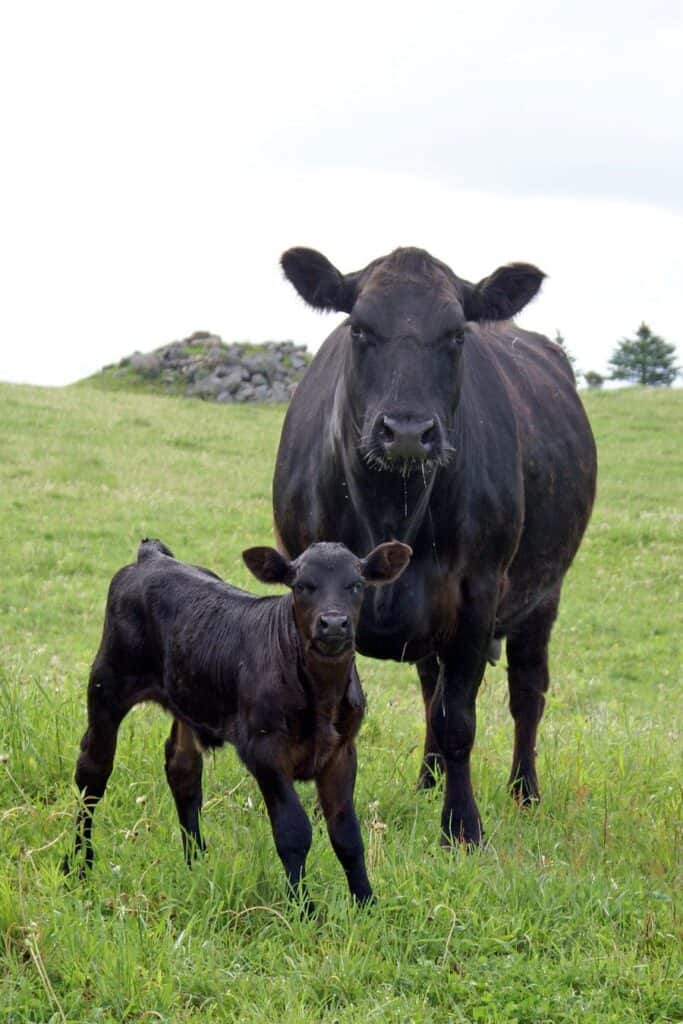 Black Angus cows are probably most famous for their meat, but did you know they’re used for everything from crayons to cosmetics?

After the cow is butchered, body parts like bones, hooves, and hair are used for a whole range of everyday products. Tendons, cartilage, and skin are used to make gelatin, a common ingredient in many foods.

Collagen from the skin is sometimes injected into human faces during plastic surgery procedures, and the cow’s fat is refined and added to body creams.

Parts of the cow can also be used to produce insulin for people with diabetes.

Overall, the most common use of the Black Angus cow is food. And people are willing to pay top-dollar for all that meat. These animals can sell for up to $12,000 each, making them the third most expensive cows in the world.

Across American cow varieties, about 60% of each animal is used for food while the remaining 40% is used for things like cosmetics. 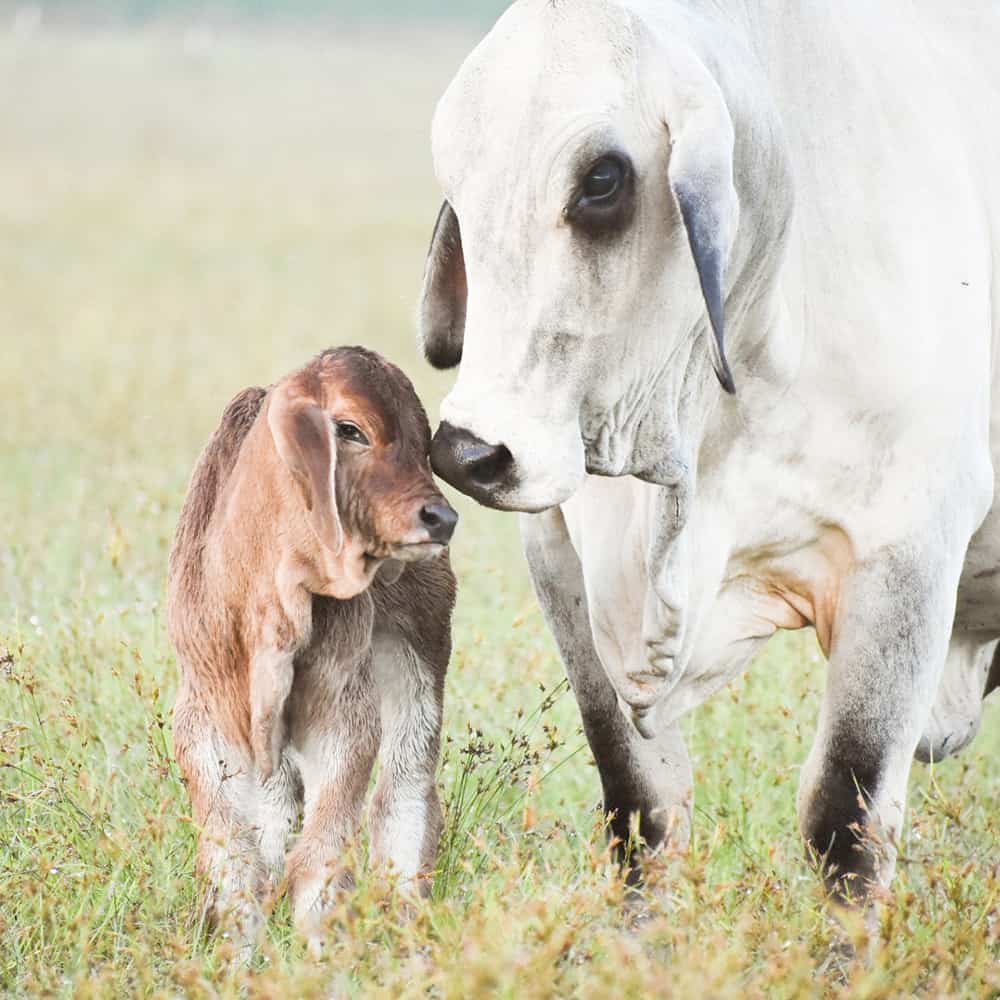 Coming in at number two is the Brahman cow. Falling under the Bos indicus cattle family, these cows are easily recognizable with their large humps, wrinkly skin, and big ears.

The breed originated in India, but crossbreeding in the United States developed a new subbreed called the American Brahman.

These cows are often slaughtered and used in the meat industry. Other common uses include selective breeding and dairy production.

As a specialty breed, Brahman cows demand a steep price tag. A single Brahman can sell for up to $20,000! 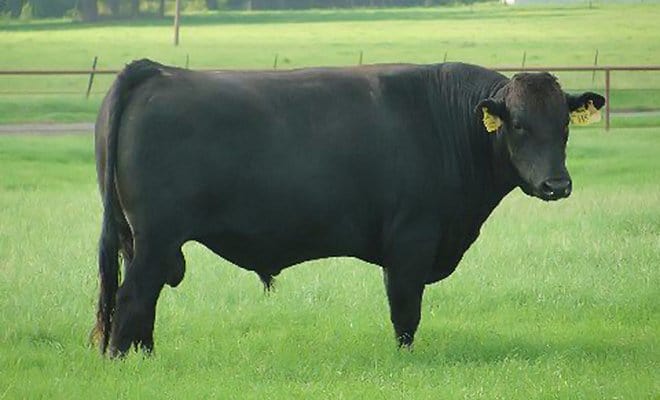 Wagyu cows are the most expensive cows in the world.

Wagyu beef is famous for ranking among the most expensive meat in the world, but did you know the delicacy actually comes from four different cow breeds?

Put simply, Wagyu cows have a lot of marbled fat, which makes their meat juicy and tender.

The life of a Wagyu cow is pretty boring. The animals are intentionally kept in very small pens so movement is limited. Less movement means farmers can control muscle (AKA meat) development.

Farmers double down on this practice by feeding Wagyu cows a rich diet to encourage that famous fat marbling. This diet is so fattening that Wagyu cows are nearly 50% fat by the time they’re slaughtered.

Wagyu cows permanently stay in their pens until they’re sold as food. They often go for $30,000 at auction, making them the most expensive cows on the market.

Thirty grand is a typical Wagyu cow price, but one of the most expensive on record sold for about $400,000.