8 of the Most Expensive Audis Ever Made

Audi AG is a Germany luxury SUV and sportscar manufacturer based in Ingolstadt, Germany. It was founded in 1909 by August Horch. However, this single manufacturer does not comprise the full history of Audi in its modern form. Other manufacturers called DKW and Wanderer formed a three-way partnership with Audi in 1932, called the Auto Union. This union is the entity that eventually took on the name of its most successful branch, becoming Audi AG in 1949. 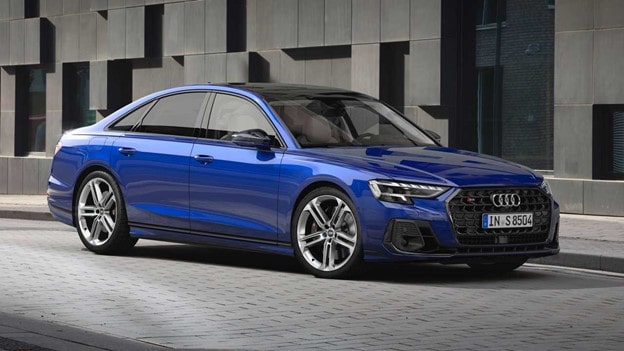 The Audi S8 is powered with 563 hp and 590 lb/ft of torque. It can get to 0-60 mph in 3.8 seconds and the Audi website reminds drivers to “obey all speed and traffic laws.” That’s how you know this car is good.

The Audi S8 in 2022 will have a starting price of $140,000, so you can bet that it comes with modern high-tech advances. These include an aluminum-optic exterior mirror housing (including lower trim), and two twin-outlet exhaust pipes.

Audi has upped the ante with its MMI touch response infotainment system for 2022 and many of these first few cars make use of it. Its onboard interactive features include playlist and radio integration, wireless phone connectivity to accept calls and text messages on your dashboard, and a new navigation system. 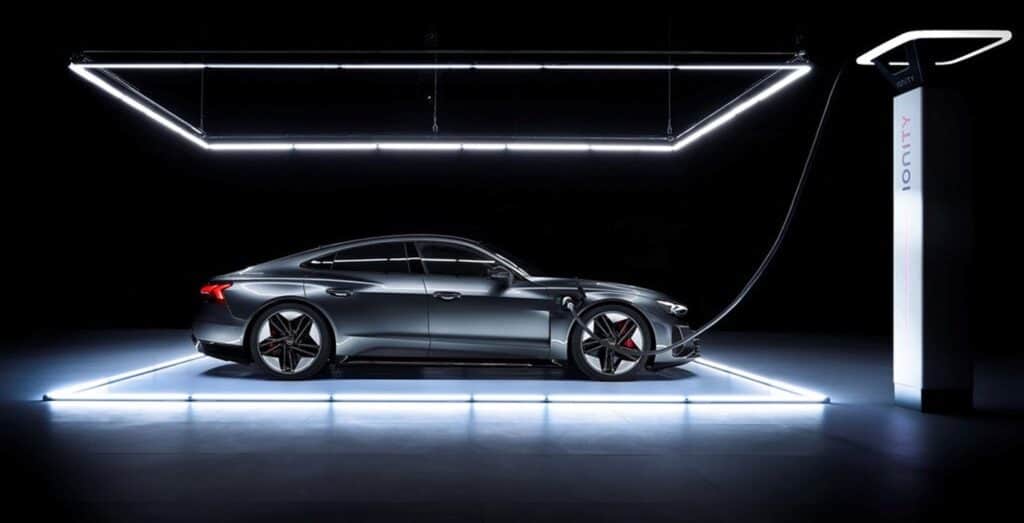 The Audi e-tron sub-brand is its line of electric cars, which have been getting more powerful and luxurious over the years. The climax of this car type is now the 2022 Audi RS e-tron GT, which is very similar to the architecture of the Taycan, Porsche’s electric sports car.

The Audi RS e-tron GT was built to make the transition easy on drivers who were more used to a gas engine but interested in switching to a luxury all-electric vehicle. To that end, the car doesn’t have the normal one-pedal driving setup of most electric vehicles. Instead, the Audi RS utilizes paddles located on the steering column that activate the car’s regenerative braking system. 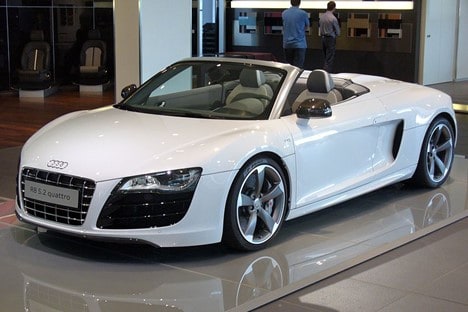 The Audi R8 Spyder is equipped with an engine that puts out 602 hp. This allows the car to reach a top speed of 204 mph and 0-60 in 3.3 seconds with a V10 performance-driven quattro engine (RWD). The car’s exterior is designed to have the look of a sportscar, as long-time Audi fans have come to know from the Spyder sub-brand. The car has an acoustic folding hood and slats built into the design that makes its profile even sleeker.

The Spyder has full LED headlights equipped with Audi’s laser light technology. It will retail in 2022 starting at $160,900.

The Audi R8 Spyder comes with many advancements in 2022. These include carbon-ceramic brakes, which serve to minimize the car’s brake fade and increase performance while reducing unsprung weight. 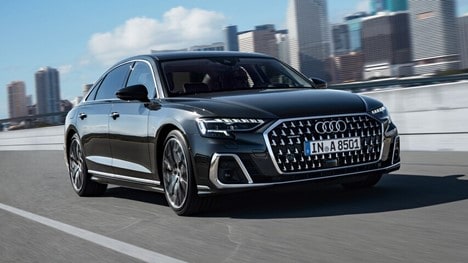 The 453 hp, 0-60 in 4.5 seconds Audi A8 S-Variant is the most expensive Audi you can buy right now. Audi may be famous for racing concept cars, but they also create streamlined, highly customizable passenger vehicles for consumers, including this A8. For 2022, Audi included an onboard memory system large enough to save 400 presets for things like air and seat control, as well as an Audi MMI touch system, which can be linked to your phone, your music playlists, your GPS, and more.

Even in a world that’s had trouble revving back up, Audi wants you to get back out there. They offer many Genuine Accessories through their first-party travel brand that can hook up to the roof of your Audi A8, as well as a week of free Silvercar rentals when you buy or lease a new Audi A8.

The Most Expensive Audi Ever Sold in History

The Audi Rosemeyer Concept car was shown in Germany at the Volkswagen factory, Autostadt, in Germany. The car was designed to be a showpiece, not a consumer vehicle. Many people lobbied for this car to go into full production after seeing it in 2000, but Audi never made the Rosemeyer commercially available.

The car is named after Bernd Rosemeyer of Germany, widely considered one of the greatest racers before the war. He’s most famous for the “Silver Arrows,” Auto Union Grand Prix racing cars built in the mid-late 30s. The Rosemeyer concept car integrates elements from those nostalgic bullet cars and reinvents them for the modern age. 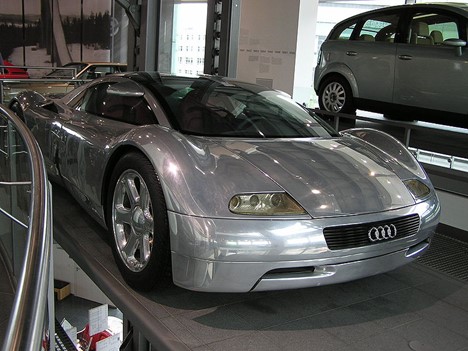 The concept sports car known as the Audi Avus Quattro was first debuted at the Tokyo Motor Show in 1991. The car prioritized an ultra-lightweight construction with its aluminum space frame, which is the second time Audi showed off its aluminum frames before mass producing them a year later as the A8.

This concept car’s powertrain wasn’t finished by the time the was car debuted at the motor show. In its place, Audi fabricated dummy parts from plastic and wood. Due to expenses, the W12 engine was not commercially available until 2001. 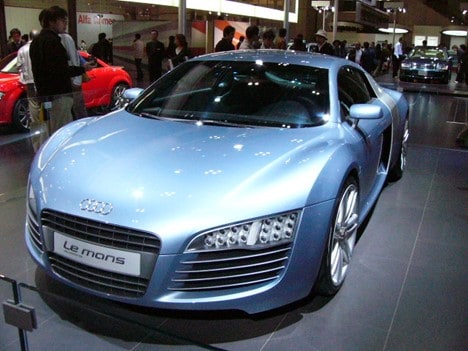 This 2-door coupe features a mid-engine build and a quattro permanent AWD transmission. The car is known for its ultra-high-tech conveniences, including full LED headlights (not common in 2003), and a full aluminum frame called the Audi Space Frame with a carbon fibre and aluminum shell on the outside. When the car hits 70 mph, an electronically activated rear spoiler comes out.

The 24 Hours of Le Mans is a race on the Circuit de la Sarthe in Le Mans, France. It is the oldest endurance racing event that still exists today. Unlike most races, where drives compete for better times over a fixed distance, the 24 Hours of Le Mans is an endurance test for both driver and car as they drive the furthest distance possible in 24 hours. The cars that win Le Mans have to not only be fast but durable enough to be pushed to the limit for a whole day without failing. 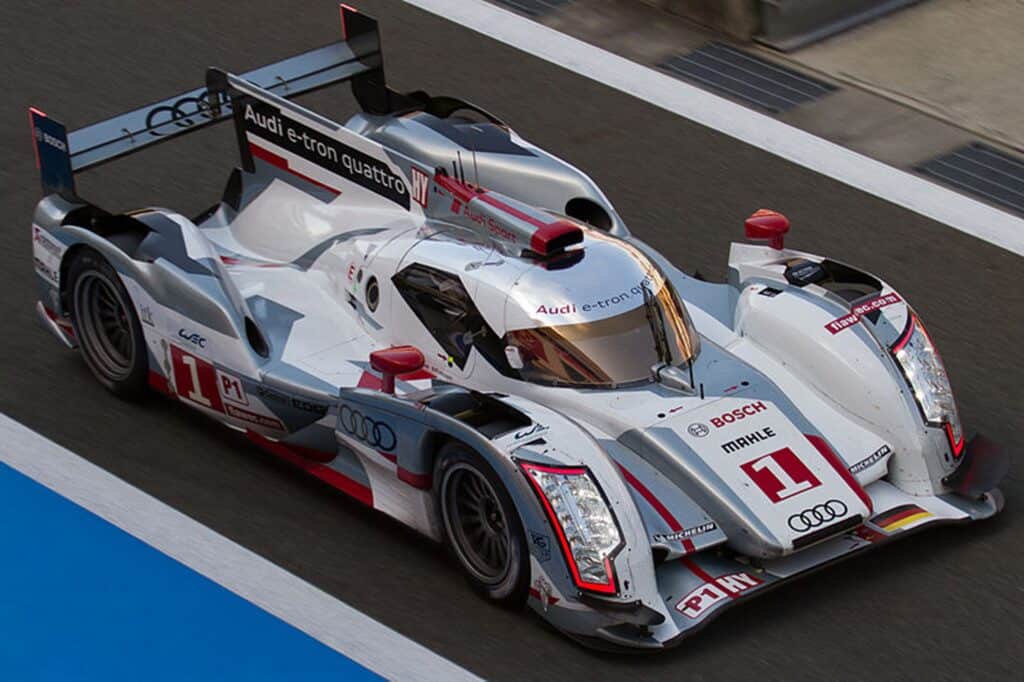 The most expensive Audi is the Audi R18 e-tron. This racing prototype car was built for Le Mans, utilizing a closed cockpit, two-door design. It was the first racing Audi that utilized hybrid power since 2012, debuting in 2016 at the Paris Motor Show. The car was designed by Ulrich Baretzky.

The e-tron sub-brand refers to Audi’s electric hybrid cars, which debuted as concepts in 2009 and went into full production as luxury plug-in hybrid vehicles in 2012. The first full-electric SUV through Audi’s e-tron brand hit the market in 2019.

This racing concept car was built three times. Two crashed and the one that went up for sale at an estimated $30,000,000 in value was never raced.

The R18 designation has been used for Audi’s racing hybrids ever since this car. The reason they didn’t advance the model numbers is because Renault, one of Audi’s major manufacturing rivals, already trademarked cars with model numbers R19 through R35.

Audi has been making high-performance sports cars and luxury consumer vehicles for over 100 years in Germany. The most expensive Audis available are high-tech 2022 luxury passenger cars as well as historically significant concept cars. Many of the latter have sold for millions on Audi’s name recognition and the allure of some of the most competitive racing events ever. If you’ve been able to view one of these cars, or are in the market for one, this list is your ticket to finding the most expensive of them all.

8 Most Expensive Golf Courses in the World