8 Rare Guns That Are Considered Collectibles

Firearms have long been a part of human history. They have played a crucial role in engineering the world’s power dynamics. Gun collection as a hobby became a popular trend during the second half of the 20th century, especially after World War II.

The collectability and value of a gun are determined by various factors, including the rarity and historical significance of a particular firearm. The condition of a gun and its unique features may also impact its overall value. 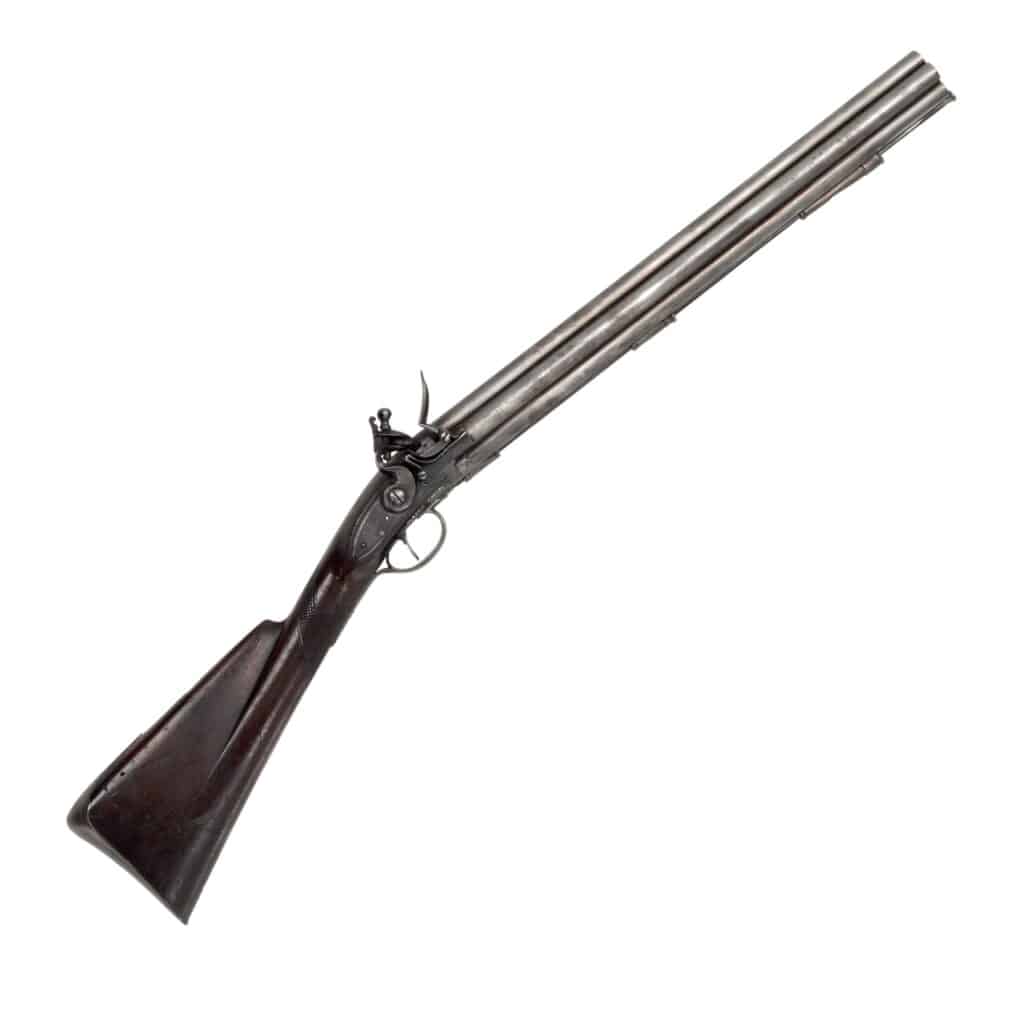 A Nock gun is a seven-barrelled flintlock firearm designed by British Engineer James Wilson. It is a type of volley gun that fires all barrels at once. The gun was considered suitable for ship-to-ship fighting. It was assumed that the simultaneous firing from atop mast would overwhelm the enemy sailors.

The gun was rejected for army use, but naval use was authorized. The Royal Navy purchased 526 of these guns in 1780. They were used in the 1782 Great Siege of Gibraltar. However, the gun’s recoil was too intense and frequently injured the soldiers. Controlling and maneuvering the gun was also quite challenging. Besides, soldiers feared that the flying sparks caused by the firing of the gun would set the surrounding sails on fire.

The manufacturing company later modified the design to make the gun more portable. Another set of 655 guns was manufactured at this stage. However, the soldiers were still uncomfortable handling the gun and its recoil.

In 1804, the Royal Navy officially discontinued using this gun. Only a very few examples of this gun still survive. They are housed in different museums, including Royal Armouries Museum, National Firearms Museum, and the Charleston Museum.

The gun is named after London-based gun maker Henry Knock who got the manufacturing contract from the Royal Navy. 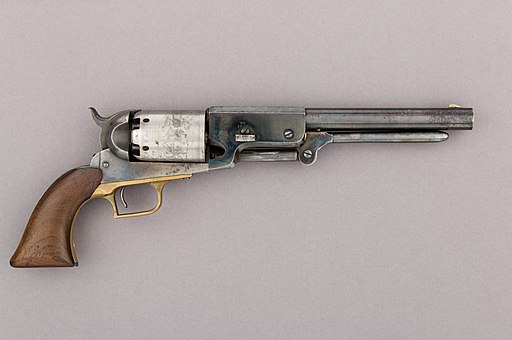 Ranger Captain Samuel Walker approached American gun maker Samuel Colt to design a pistol that would be extremely powerful at a close range. With the specifications provided by Walker, Colt came up with the design of the single-action revolver Colt Walker.

Only 1100 specimens of this gun were ever made, 1000 for the US Army and 100 for civilians. The weight and size of the gun made it difficult to handle the gun comfortably. Besides, the cylinders of many of them got ruptured after firing. Around 300 guns were returned to Colt for repair. Only about 10% of these guns survive today.

Samuel Walker carried two Colt Walker revolvers to the battlefield of Mexican American war, where he was killed shortly after. Those two were the only Colt Walker models that Walker could see before death. 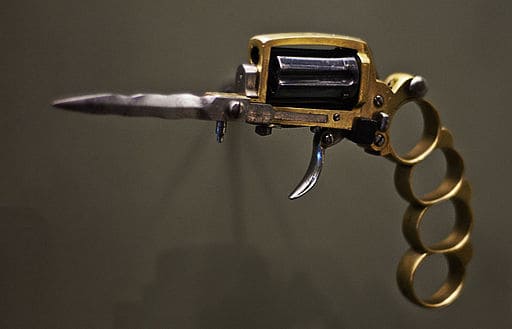 The Apache Revolver is one of the most notorious firearms ever made. It incorporates a revolver, a knife, and brass knuckles. These guns were used by the French gangsters and were first conceptualized in 1860 by Louis Dolne.

The French underworld continued producing Apache guns for about 10 years; for obvious reasons, there are no records of how many of them were in circulation. The gun was built on the principle of a pepperbox revolver that incorporated a fold-over knuckle duster and fold-out dual-edged knife.

During World War II, British Commandos allegedly used a revolver with a similar design. However, this was never officially acknowledged. 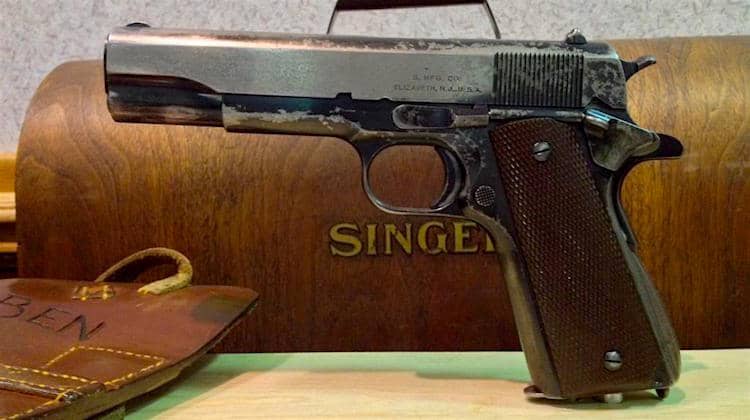 During World War II, all manufacturing companies in the US across industries retooled their factories to produce weapons. Singer, the manufacturer of sewing machines, did the same to assist the country in the war.

In 1939, the US War Department contracted the company to build 500 units of M1911A1 pistols. It was a test run to see if the company could produce 100 handguns a day. The Singer delivered the required 500 pistols but couldn’t live up to the pace of desired daily production rate.

As a result, the company didn’t get the contract to manufacture any more guns. The tooling machines were sent to Remington Rand and Ithaca Gun Company.

The Singer pistols were used by the US Army Air Forces. However, among 500 units, only a few survived the war due to the high casualty rate of the Air Forces.

Although Singer failed to reach the target of producing 100 pistols a day, their pistols were of the finest quality. Thus, War Department decided to give them a contract to build aviation-related components.

It was a .54 caliber percussion rifle patented by Thomas Wright Gardner Treeby. This uniquely designed rifle can be considered the ancestor of modern-day machine guns. The gun had a chain of 14 chambers and could fire 14 shots in quick succession. The concept was totally new at the time it was built.

Treeby designed the gun expecting that it would be adopted by the British Army. However, after extensive testing, the army rejected it as several design flaws were found.

Treeby manufacture only two examples of this gun. One of them is currently a part of the Vokes Collection, Winchester, and the other one is in possession of private collector Tony Watts. 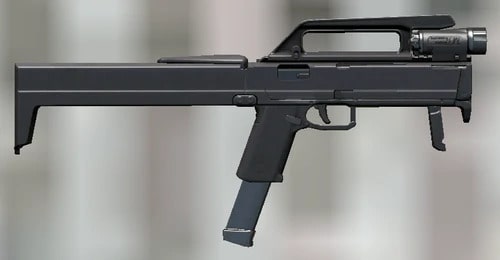 Magpul FMG-9 is a prototype that never went to production. It was designed as a folding submachine gun based on a modified Glock 18. The firearm was made with polymer instead of metal to make it lightweight.

The gun was designed primarily for the ease of conceal-carry. It could be folded and put in a small box. Magpul made it clear that they produced the gun only as a proof of concept and didn’t have any intention to bring it into production. 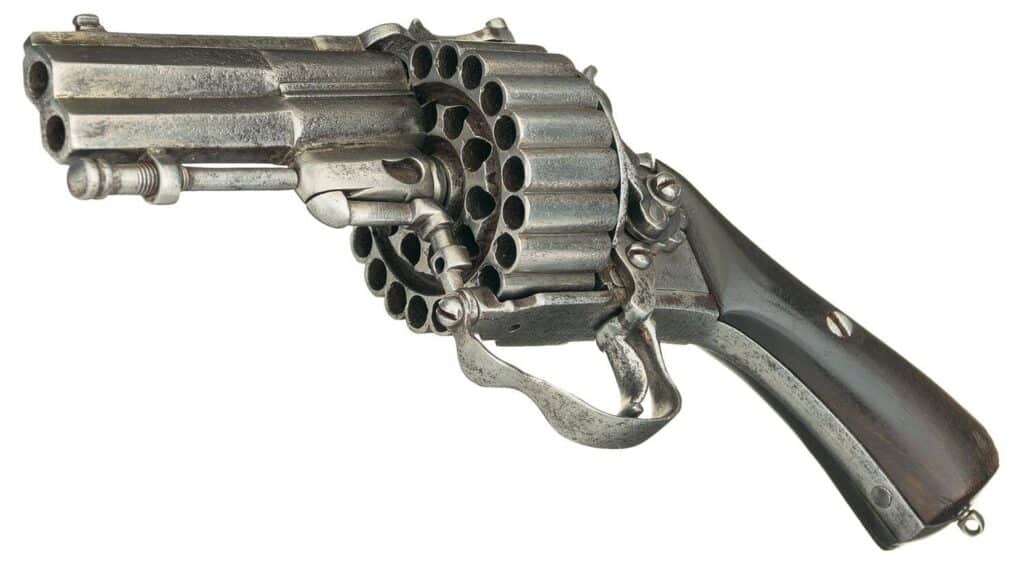 The revolver is equipped with over and under barrels and has a double layer cylinder with 30 chambers. Although it has a striking look, the pistol is too heavy for practical purposes. Moreover, the user needs to load all the chambers individually.

The only known specimen of this gun was sold at an auction held by the Rock Island Auction Company in 2014 for $11,500.

It is not known who designed or manufactured the revolver as there’s no documentation or trade stamp. Experts believe it must be a proto-type or a pet project that never went into mass production due to the design fault. However, the style suggests it is definitely a European design, most likely French. 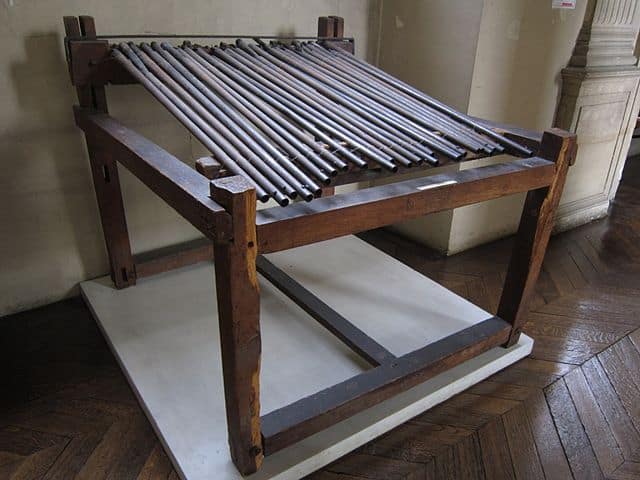 The Infernal Machine volley gun is the rarest and most historically significant gun on this list. This homemade 25-barrelled gun was used in a failed assassination attempt of King Louis Phillip I.

The gun was designed and built by Giuseppe Marco Fieschi. Fieschi wanted to ensure the highest degree of damage and thus built a gun that could fire multiple barrels at once. Wood and metals were used for making this gun.

On July 28, 1835, Fieschi fired the gun targeting the king’s convoy. Four barrels misfired, four ruptured, and one was not loaded. The incident killed 18 people, and many others suffered serious injuries. However, the king suffered a minor injury.

This historical gun is kept at the state museum of French history in Paris.

Fieschi himself suffered a severe injury to his head, face, and hand. He immediately fled the scene, but authorities followed the blood trail and arrested him. Later, he was sentenced to death and guillotined along with his co-conspirators Pierre Morey and Theodore Pépin.

The 8 Most Expensive Cars in Forza Horizon 5